In “Corazones,” Six Latina Women Celebrate and Remember Their Community 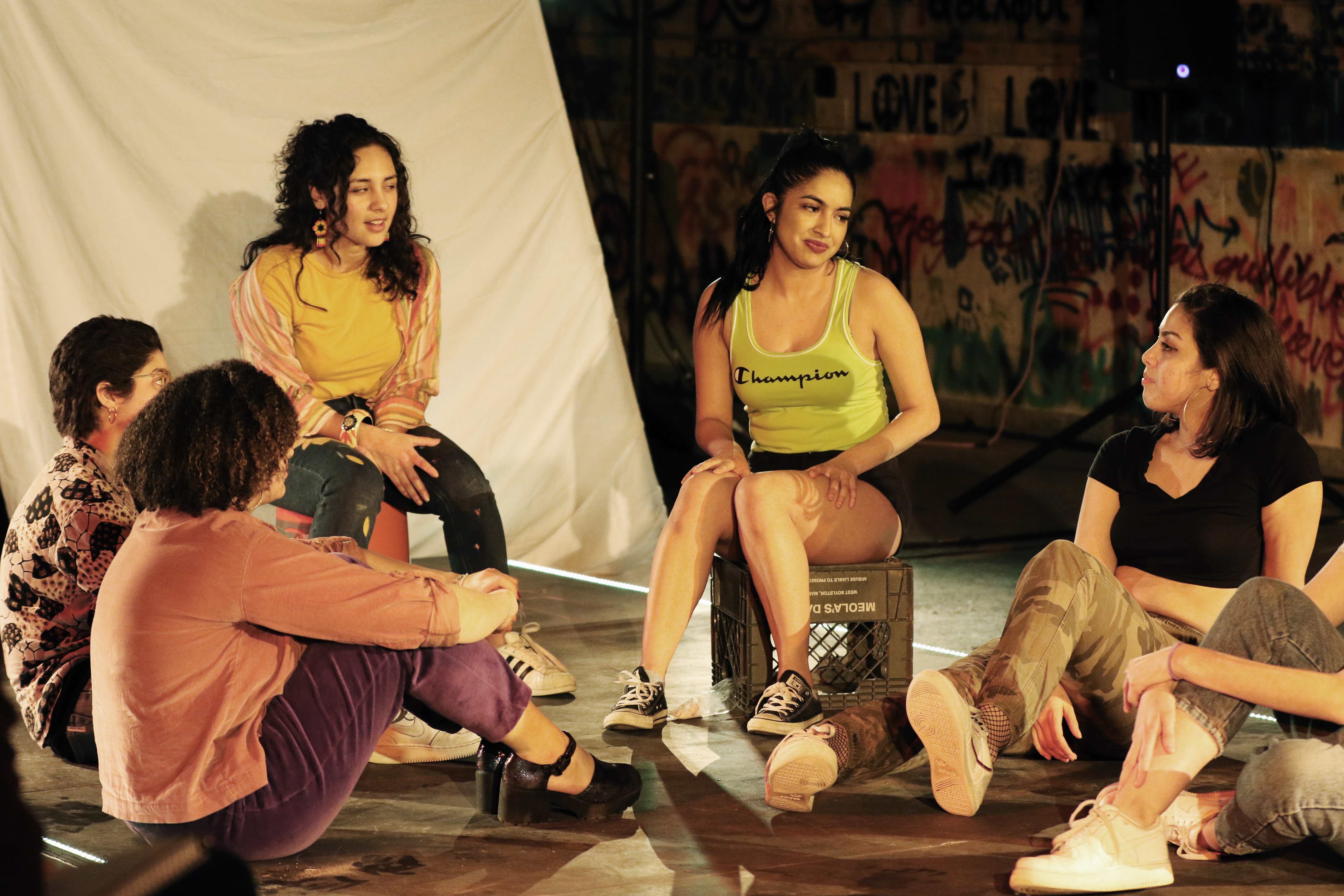 Underneath the multi-colored picado banners lining the WestCo Cafe, a six-woman chorus bursts forth from a white tent toward the audience. Each woman offers a different energy and dons a distinct style. Jeans painted with sunflowers, neon tank-tops, dangly earrings, bright stripes, and graphic T-shirts become a welcoming blur as they flash by. Each woman occupies a different space on the runway-style stage and greets the audience with a different interjection, recognizing audience members with a “good to see you,” “bienvenidos,” or “what it do babyyy,” respectively. But these alternate greetings eventually harmonize into a singular voice. The six women before us, different as they are, are bonded by a shared identity: They’re Latina women from the Southwest Side of Chicago. It’s an anthemic entrance into this weekend’s Second Stage’s production of “Corazones,” and one that captures the show’s unique ability to weave the threads of individual experiences into an expansive tapestry.

“Corazones” was written and directed by Luna Mac-Williams ’22, based on her personal experiences growing up in the Southwest Side of Chicago, along with the stories of her friends and family. Mac-Williams had originally planned on staging her own adaptation of Sandra Cisneros’s novel “The House on Mango Street,” but after facing rights issues, she instead transformed the play into an amalgamation of her own previous writing about her home city.

“I went back and went through my poetry and creative nonfiction,” Mac-Williams said. “[I] interviewed my mom, my tía, my cousins, my sisters, other femmes in the community about what it’s like to be from there, and to be growing up navigating the beautiful, weird world that we live in…. And [it’s] evolved and changed a lot, but it came out of, ‘I have this message, I have this community that I love so furiously that deserves to have a voice onstage. I think this is really important to bring to a place like Wesleyan, where people—even if they’re not from that specific neighborhood—will resonate with these ideas.”

Combining a wide range of literary and performance genres into one piece, Mac-Williams describes “Corazones” as her “manifesto.” She was inspired to create an immersive quality to the show by the choreo-poem “for colored girls who have considered suicide / when the rainbow is enuf” by Ntozake Shange, as well as Chicago’s Free Street Theater, which has created devised shows. But she also expressed a desire that the play offer a wide range of elements for the audience.

“As much as it was a play, [I wanted it] to feel like a block party, a family dinner, a kermes, a good high, a show in a park, a slam poem,” Mac-Williams said. “I have this living, breathing experience I wanna do with the stories I want to tell.”

The show’s ensemble embodies this living, breathing experience, where individual narratives create a heartfelt portrait of Southwest Chicago. Actors play various roles throughout the vignette structure of “Corazones.” The show is not driven by a continually escalating plot, but instead by the tension of women slowly, sometimes painfully, revealing their stories to each other. Thus, actors play characters who deliver short monologues and scenes that, while not explicitly connected, still form a cohesive personality. Some of these monologues seem recalled from childhood or adolescent memory: Lily (Dulce Rubio ’22) rides around on her scooter, describing her glee at discovering an ice-cream truck; Violeta (Ange Zuniga-Aleman ’22) recalls being attracted to the boys setting off the fire hydrants on her street; Gloria (Salma Hassan ’22) amusingly discusses her inability to dance as a young woman, despite her family’s encouragement.

But the show also follows characters who travel through difficult journeys over a longer period of time. Rosa (Alejandra Sanchez ’22) initially recites innocent love poems that mature with philosophical inquiry over the course of the show. Margarita (Leslie Rosario-Olivio ’22) remembers sweet memories of her parents, before she dives into the unnerving waters of grief, describing her estrangement from her family due to religion, and the death of her father.

Perhaps the clearest author surrogate for Mac-Williams is the artist Jasmine (Zulema Cabrera ’22), who passionately advocates for the power of artistic creation while recognizing the constant code-switching she must inhabit to exist within her neighborhood and primarily white creative spaces. Talking about this discomforting phenomenon, Jasmine reveals, “If I were to talk to myself, I don’t know what that would be like. I don’t think I know what my voice sounds like just to be me.”

However, it’s exactly that difficulty that Jasmine is facing—the frustrating weight of always inhabiting many people, of always representing your community—that actually emboldens all the characters of “Corazones.” As Shange said when reflecting on her own playwriting, “the personal story of a woman became every woman, the solo voice becoming many.” The women of “Corazones” feel embarrassment, and even deep pain, because of their identities and the challenges they face living in Southwest Chicago. But when their isolated experiences are placed in sequence with each other, together these disparate scenes form a mosaic of broken pieces that can’t help but reflect each other. The solo voices collect into many voices, and prove a solidarity on stage that perhaps even the characters within the show can’t recognize. 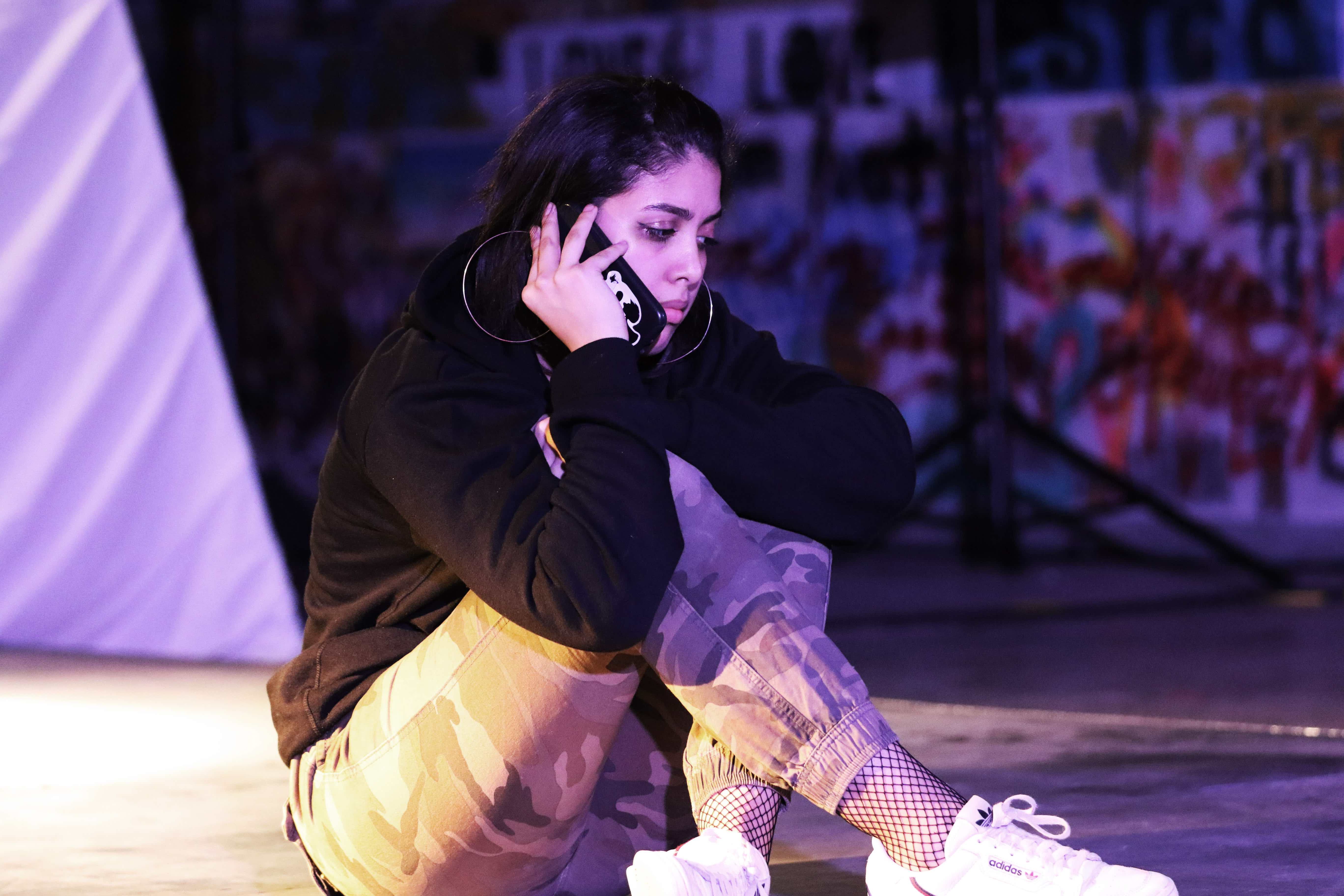 Thus, it’s a liberating experience to see all six cast members interact with each other in group scenes that disrupt the characters’ loneliness. These scenes take on many formations, whether it’s a group of girls sucking on lollipops on their stoop discussing their childhood fantasies, teenagers discussing their mixed feelings about quinceañeras, or adult women smoking up and remembering their first same-sex attraction. But all of the scenes revel in the joy of reminiscing, of fondly remembering the details of life that you can so easily forget, of finding other people who can finally understand and share your own experiences, good and bad. These kinds of intra-community discussions—debates, arguments, and jokes that can only come from the members of the same community—flow fluidly from the cast, who themselves must share a common understanding with each other. It’s a rare, and great, experience to see so many Latina women who are not tasked with the burden of explaining themselves to an outsider, whether that be a man, a straight person, or even a gringo.

Crafting this kind of space specifically for LGBTQ Latina women was a primary concern for Mac-Williams when she creating the show, who stated that it was a conscious choice to write the show with characters who all shared her identities.

“It was a conscious choice because—so much of this show is—there’s some really silly, head-ass shit that goes on,” Mac-Williams said. “These poor queer Latinas [are] having a good time, and I think that there is so much validity in those voices, in seeing that experience. I think that identity is something that deserves so much love and space that doesn’t get it. It’s the voice that was the loudest in my head, so it was the one I just naturally wanted to write about.”

Mac-Williams sees her show in conversation with the other Latinx-focused shows that have gone up through Second Stage recently, such as “La Casa de Bernarda Alba” and “In the Heights.” She hopes that these kinds of narratives serve the Latinx community by offering depictions of themselves that don’t ignore the difficulties faced by people with their identity, but still celebrate the resilience within themselves.

“Knowing that there is joy, knowing that there is light, conversely, when the hard shit comes, you know that it’s worth it to push through for that joy, and for that love,” she said. “I think it is a political act to have a good time when you’re [a queer person of color]. So I wanted to give people a good time…. But also, I want people to think about the very complex, complicated messy human-ness of toggling between so much pain but also goofy shit at the same time. Because that cross-roads between pain and joy is where we find most of life, and most of art.”

The most poignant moments of “Corazones” capture this balance of fear and joy, as when Violeta, feeling depressed at college, calls her mom, Gloria. Despite Violeta feeling the walls close in on her, and despite Gloria going through her own troubles, the mother encourages her daughter to hold onto things worth living for: the smallest corners of life, the things that seem insignificant, the things that so easily get lost in the insanity of everyday life. Just like the small scenes of “Corazones,” these things worth living for grow bigger together, forming something so much larger than the sum of their parts. As Shange also said, “Each poem fell into its rightful place, a rainbow of colors, shapes, and timbers of voice, my solo instrument blossoming into a cosmic chamber ensemble.”

“Corazones” encourages us to see how the small things in our lives, and the small things about ourselves, are everything. A few blocks of neighborhood can contain a universe, six actors can tell the stories of an entire community, and just a few words can contain someone’s whole world.

Nathan Pugh can be reached at npugh@wesleyan.edu or on Twitter @nathanpugh_.