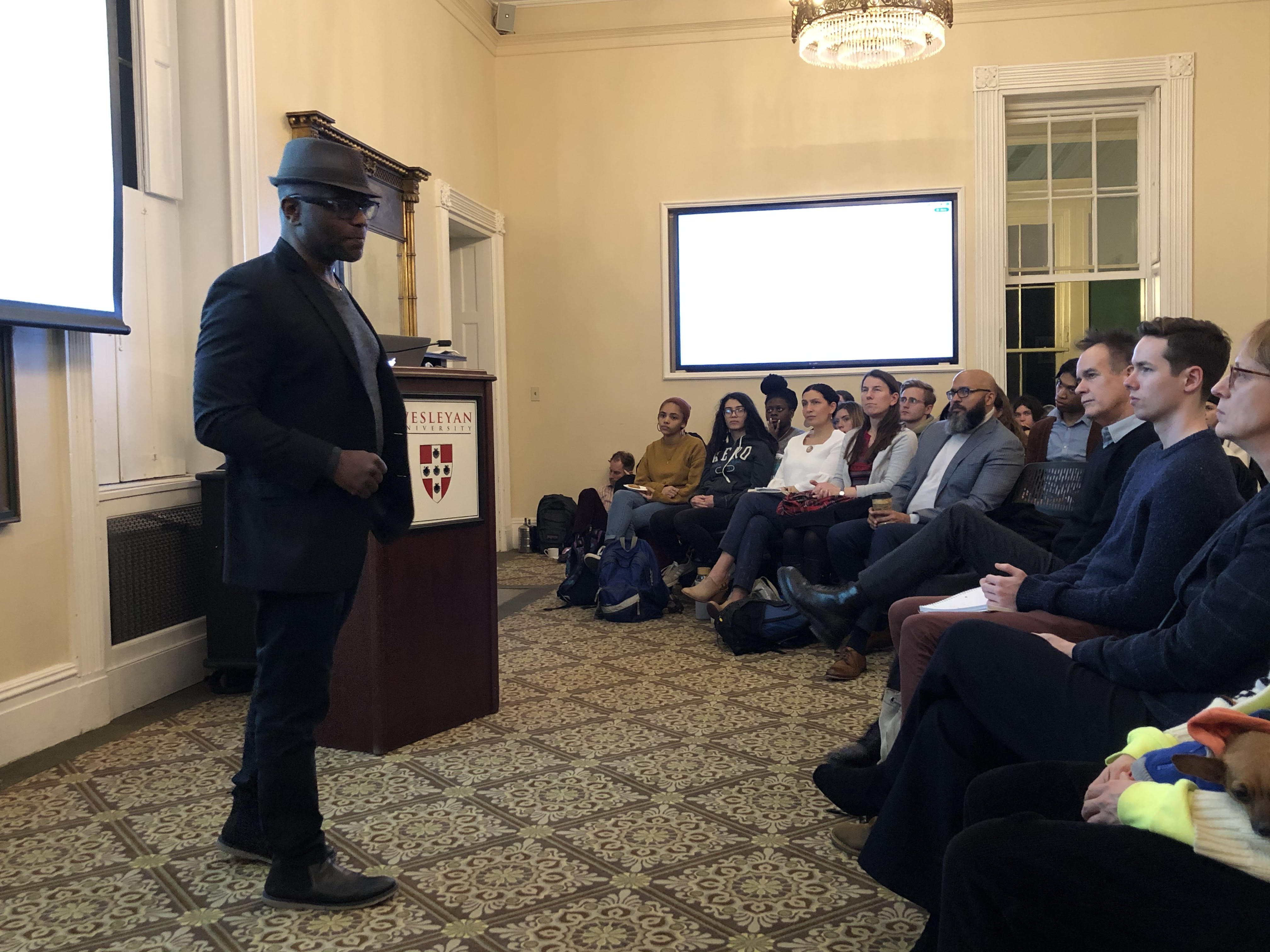 On Wednesday, Feb. 24 Tyehimba Jess conducted a reading from his second collection of poetry, “Olio,” in Russell House. The collection, comprised of 14 poems, won the 2017 Pulitzer Prize for Poetry. Throughout the reading and in the question and answer session that followed, Jess discussed the intentionality and historical motivation behind his work.

Jess’ work reweaves the narratives of underrepresented and marginalized figures in history. With an explicit focus on performers in minstrel shows, an early 19th century form of entertainment that displayed and commodified profoundly racist caricatures of African Americans, Jess’ work appropriated traditional poetic forms to rewrite previously silenced narratives. This process both educates the reading public about this history and adds a layer of interiority to characters that have historically been reduced to simplistic representations.

“I feel privileged to be in front of this audience today, reading words about people who, in their lifetime, were forbidden to read and write,” Jess revealed.

Introducing Jess, Assistant Professor of English Danielle Vogel commented on the importance of the knowledge Jess imparts through his poetry and how structure helps him achieve this purpose. Vogel explained how Jess’ book is a resurrection of silenced histories through giving them voice, using invented interviews and historical content.

“Jess, who is as much of a poet as he is a historian, creates through the structure and content of the book ‘Olio’ a phenomenal commentary on the minstrel show itself while rescuing and reweaving African-American histories,” she said.

Vogel also commented on the importance of Jess’ decision to incorporate the audience into his work. While the half-factual, half-fictional nature of his work encourages readers to conduct their own research, the loose interpretation of reading style situates them as actors within his attempt to rewrite history.

Jess began by reading a series of poems he wrote about Millie and Christine McKoy, a pair of pygopagus slaves who, early in their lives, were sold by their owner to a travelling minstrel show. His poetry reflected on the decisions made by them and those around them with respect to their lives—decisions they often had no control over. The poems were chronological, a response to important stages in their lives: on the road, upon return to their plantation, their love story at the time of death.

Jess creatively fused three distinct sonnets, one from the perspective of each twin and one from the perspective of their conjoined voices, to create a shape for the poem that mirrored the shape of their bodies. While he claimed that his intention was both to separate their voices and to unite them at the center of the poem, Millie and Christine have little individuality in their respective voices, as all three sonnets can be read as their collective musings. Jess strategically matched the poem’s form to the twins’ bodies, fusing it with the overarching narrative and adding depth to characters that have been historically objectified, understood as bodies and nothing else.

The agency Jess granted readers added to this process of de-flattening, as readers become conscious of their gaze. Readers can choose to read the poem in multiple directions and from multiple starting points, which, Jess insinuated, is the way that the eye of the spectator would gaze on the bodies of the McKoys.

“Your eye traces across the body of the poem, perhaps the way that they eye of the spectator would gaze upon the body of Millie and Christine McKoy, but this time absorbing the story of Christine and Millie McKoy,” Jess stated.

Jess then read a series of poems about Bert Williams and George Walker, two minstrel comedians.

“They were in the business of being a caricature, a two-dimensional representation,” Jess told the audience. “If you were going to be a black comedian in 1890 and you wanted an audience, that was the only way it was going to happen.”

Similarly fusing their distinct narratives together through the Ghazal style of poetry, Jess constructed a narrative of Williams’ and Walker’s grievances towards a job that forces them to play caricatures of Blackness. The printed version of these poems illuminated Jess’s mission to add a layer to their historical two-dimensionality. Jess concluded his reading by tearing these poems out of the book and transforming their flatness into a cylindrical shape.

In a post-talk Q&A, Jess discussed his creative process and thematic interests. Responding to a question, Jess said that his subject came before his form but that both are equally important in his work. In some cases, however, it is hard for him to tell which came before the other. When a student asked whether he follows the same order in other readings, Jess responded that he does not memorize order but follows his intuition.

“That’s the idea: That the reader can come in and choose their own path, and it can be different every time,” Jess responded.

The last question from the audience concerned magic. When asked whether he considers himself a magician or related to the magical archetype, Jess answered in the negative. However, he admitted that he attempts to accomplish a kind of magic in his work.

“It’s about the idea of taking the reader through a journey, about having them identify, in different ways, with people that weren’t even in their minds before,” he said.