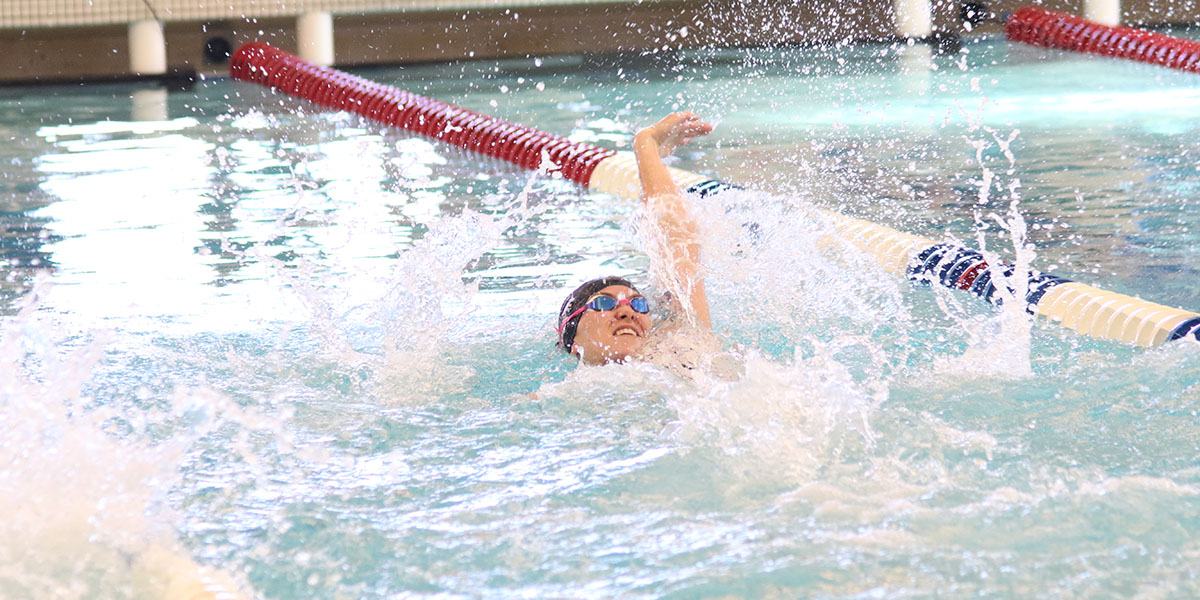 Women’s swimming and diving took eighth place in the annual NESCAC Championship last weekend, a slight drop off from their program best, sixth-place performance last season. Although the team didn’t come out on the top of the ’CAC, the day was filled with success across the (diving) board: a NESCAC title, a new varsity record, two All-NESCAC team selections, seven top-eight finishes, and five NCAA “B” qualifying standard times.

The Cardinals’ success came throughout their roster, in both individual and relay races.

“With only 15 swimmers and three divers, our roster was much smaller than the other NESCAC teams so our depth in certain events was not ideal,” head coach Peter Solomon, who was named NESCAC Coach of the Year at the Championships in 2017 and 2019, wrote in an email to the Argus. “Wesleyan was well-represented in all of the sprints, stroke, and diving events…many of our swimmers and divers improved from their best in-season times and performances. The time drops are incredible!”

Other seniors on the team also had impressive weekends. Grace Middleton placed in the finals of all of her individual events (the 50-butterfly, the 100-butterfly, and the 100-freestyle). While Alex Berger had personal bests in the 50- and 100-freestyle, Hannah O’Halloran rounded out the success in individual events, finishing third in the 200-backstroke. The third-place honor was her personal best finish at a NESCAC Championship; it also garnered an NCAA “B” Qualifying Standard and a spot on the All-NESCAC team with Murphy.

The seniors also contributed to the success of the team’s relays. Berger anchored the “B” 200-freestyle relay and swam another personal best. Leah Cravitz performed well in the “B” 200-medley and the 400 freestyle-relay, the latter taking a sixth-place finish in the final.

On the board, Wesleyan had no top-ten finishes; however, newcomer Zoe Paglia ’23 earned eleventh in both the 1- and 3-meter diving events against 25 and 23 competitors, respectively.

O’Halloran, Middleton, and Murphy all dove into the water again for relay events, most successfully with first-year Heddy Parker in the 200-freestyle. Their team took a seventh-place finish and established a new varsity record.

Despite her success in the pool—both in individual events and relays—Middleton will remember the team spirit of the weekend most fondly.

“On the third day of NESCACs, when everyone was starting to feel tired and a little down, the sophomores came into our team meeting with high energy and playing loud music so that we would all get up and dance,” Middleton wrote in a message to The Argus. “That energy was contagious and I went into the night session with a smile on my face from singing and dancing with my teammates. That’s when I knew no matter what happened we would lift each other up instead of showing any negative attitude.”

This energy was also one of coach Solomon’s favorite parts of the Championship.

“Some of the highlights of the weekend include the fun moments on deck seeing teammates cheer each other on, laughing together on the bench, and dancing to get pumped up for their events,” coach Solomon wrote. “I know the relays are ready when they are bouncing around behind the starting blocks all together.”

This enthusiasm was especially important after a challenging season, one that included rerouted winter break training from Puerto Rico back to campus.

“This year was different because we faced a lot of adversity throughout the whole season,” Middleton wrote. “However, I think those adversities made the team come together as a whole and made us realize we are one team and we need to be there for each other through the highs and the lows—which is exactly the type of support I saw this past weekend.”

The team spirit will continue as the Cardinals take on the NCAA Division III Championships in the next step of their postseason journey. Because these Championships are four weeks away, the team will build their yardage up in the pool before the national qualifiers and then taper off prior to the competition.

Despite the challenges that await them ahead at the NCAA Championships, women’s swimming and diving—especially the seniors, who will compete in their final races—will continue giving the competition their all.

“Whenever I swam, I swam knowing that I didn’t want to leave the pool with any regrets—as we say in swimming—leave it in the pool,” Middleton wrote. “Before my last relay race, with two other seniors Caroline Murphy and Hannah O’Halloran and sophomore Mengmeng Gibbs, we just had a blast dancing with the other relay teams despite going into a race against them. We knew that as long as we had fun and gave it our all we would end NESCACs without regrets.”

The Cardinals plunge back into action in March, where they’ll face off against the best swimmers and divers in all of Division III.