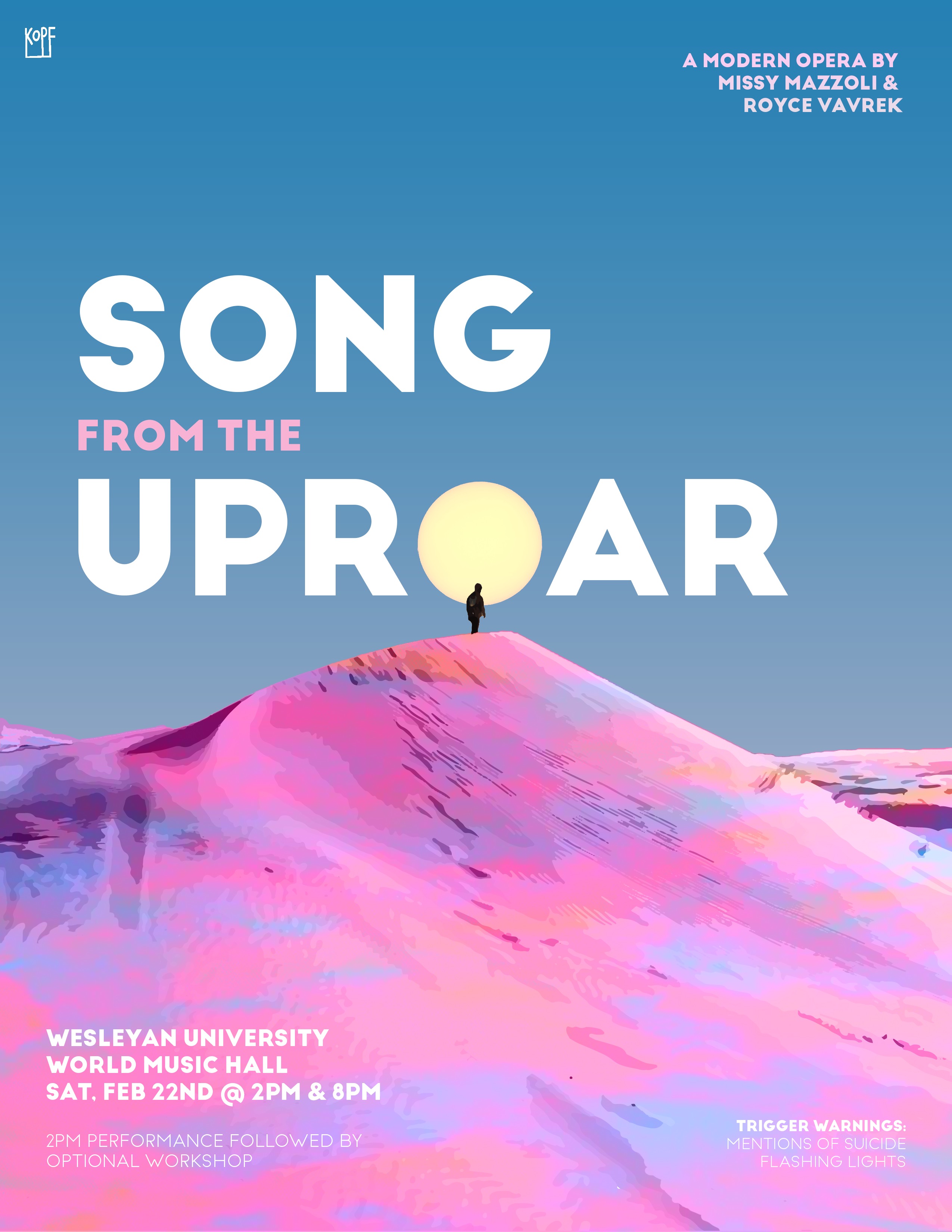 There’s a lot you might think of when you hear the term “opera,” whether it’s loud soprano women singing in foreign languages, or big sets and casts of 30 people or more. You might think of old stories with archaic themes, or three-plus-hour affairs with your grandparents.

“Song From the Uproar: The Lives and Deaths of Isabelle Eberhardt,” the University’s first student-run opera, shatters our understanding of what we think opera is supposed to be.

Released in 2012, “Song From the Uproar” is a modern opera composed by Missy Mazzoli. Compared to traditional operas, the music is much more experimental, defying genre. Although it tells the story of Isabelle Eberhardt, the plot isn’t linear or narrative; rather, the opera aims to emulate Isabelle’s identity more than anything else.

“Something I really love about her life and how the opera portrays her life is how complex and contradictory and nuanced she is,” Lisa Stein ’21, who plays Isabelle, said. “I don’t think the opera reduces her to anything less than that. I think that the choreography and interpretation we have of it does a good job of representing that. We’re all complicated humans.”

While the modern, feminist, and genre-defying opera comes to campus this weekend, this production has been in the works for quite some time. Stein, who also works as the show’s producer, has wanted to bring opera to campus since her freshman year. At first, no one expressed interest. She quickly got involved with other types of musical performance on campus, playing the cello and performing with singing groups.

Her sophomore spring, she complained to a friend about how much she missed opera. He encouraged her to try again. That night, she went home and researched operas online.

“I didn’t want to do a traditional opera here,” Stein said. “I kind of knew that modern opera was a category but I didn’t know much about it.”

Stein started listening to soundtracks from a list of modern operas, and that’s when she found “Song From the Uproar.” It has a six-person cast, a mezzo lead, and a modern instrumentation with a diverse array of instruments. It also deals with religion, sexuality, and female empowerment.

Once Stein was set on the piece, she set out to talk to others about gathering a team to put the opera on at the University.

“All of sudden, everyone was super into it,” she said. “It was a completely different playing field than freshman year. It was just the right time, I guess.”

Assembling a team of interested students in an opera production was just a preliminary challenge. Mastering the show’s challenging music was another.

“I honestly think this is a very complicated piece of music, so navigating it has been one of my biggest challenges as a musician,” Shiva Ramkumar ’22, the show’s vocal director, said. “There are tons of funky chords and rhythms, and it’s definitely been tough getting them to lock how we want them to.”

Stein, who brought together the show’s talented team, agreed.

“For pretty much everyone involved in this, it’s pushing us beyond our limits,” Stein said. “It’s one of the hardest things we’ve ever done…. I don’t think production could happen without every single person.”

Over 20 people make up the opera team, from directors (two co-directors, a music director, and a vocal director) to a choreographer to Stein’s producer role.

As a producer, Stein’s main responsibility has been coordinating how to make the opera happen on campus without going through an on-campus organization.

There were many hoops to jump through, including campus spaces, finances, and resources. For the production to go up in the Center for the Arts’ (CFA) World Music Hall, Stein had to work with the Music Department, because students are not allowed to use the CFA spaces unless they’re working with an academic department or student organization. Stein is currently enrolled in a private music tutorial that grants her access to the CFA space.

To raise funds for the rights and production costs, the team started a successful GoFundMe, reached out to alumni who were interested in opera, and applied for (and received) a grant from the Jewett Center for Community Partnerships.

The team applied for grants that required reaching out to the Middletown community. Not only do they want students on campus to come see the opera, but they want to encourage those outside of the University—especially younger students—to come see it.

“I had worked at a summer camp the past two summers, and I would often sing opera for my campers and they loved it,” Stein said. “These are like eight-, nine-year-olds who would eat it up. I didn’t find that super surprising because opera’s loud and exciting and super absurd…. I told my advisor, and she was like, ‘Woah! That’s so cool. Society’s conditioning kids to dislike opera before they even are exposed to it.’ So my revelation was that we need to expose kids to opera before they decide to not like it based on nothing.”

The team contacted the local high school and Oddfellows Playhouse to discuss students not only seeing the opera, but also taking part in a workshop afterward. In the workshop, students will learn a song from the opera and the corresponding choreography.

“The idea behind the workshop is pretty closely connected to my opera journey…. It’s different to be able to see an opera than to actually get to jump into an opera,” Stein said. “They get to go on stage with the instrumentalists and the rest of the cast and be in the opera.”

The team’s mission is to not only make opera accessible to University students and younger individuals, but also to expose them to a type of opera they’ve never seen before.

“It’s one thing for the Wesleyan population, which I view as fairly open…to experience something like this,” co-director and graduate student Manuel Perez III said. “But it’s another thing to expose younger generations of people, who have very little exposure to opera, to see something that’s like that. We’re being proactive in destigmatizing it.”

Sam Driver ’21, Perez’s co-director, stressed how the non-traditional aspects of “Song of the Uproar” provide a new opera-viewing experience distinct from most students’ previous experiences with opera.

“People are going to come with this expectation of what they imagine opera is going to be like, of these people belting out notes far away on a stage with huge set pieces,” Driver said. “I think what makes this an even better opera to be the first student-run opera at Wesleyan is that it goes against all of that. It gives you this experience that’s so unique to this opera. It says, ‘Here’s how you can use the art form today,’ taking on these things that Wesleyan students are interested in.”

Perez agreed, encouraging people from all backgrounds and experiences to come see the show.

“Anyone, regardless of what you think about opera, just throw it out the window when you come to this because it’s really non-traditional,” he said. “We really hope it reaches everyone. It’s not going to be so abstracted that…. You’ll have to do all of these mathematical calculations to understand it, but we’re really trying to appeal to the emotional, evocative but still very grounded perspective of someone’s life…. It’s universally applicable, regardless of gender, age, class. I think it’s a very empowering story.”

Students and members of the Middletown community alike can see “Song From the Uproar: The Lives and Deaths of Isabelle Eberhardt” this weekend, on Saturday, Feb. 22 at 2 p.m. and 8 p.m in the CFA’s World Music Hall.

“I’ve learned a lot from Isabelle’s life,” Stein said. “She’s a really powerful individual. I want to do her justice and share her story with people.”