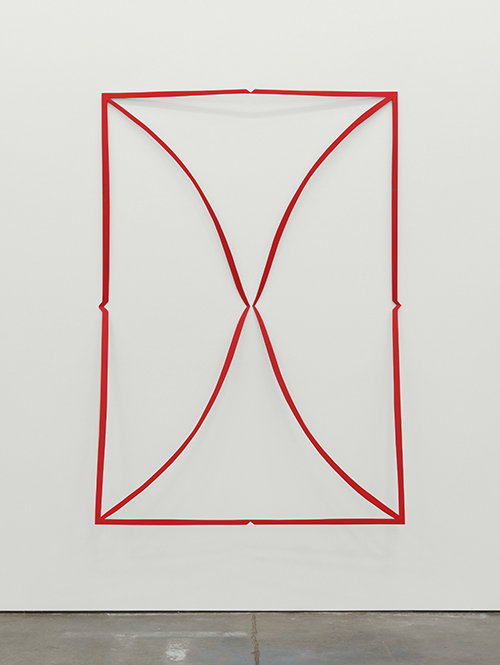 This past Tuesday, students crowded into a room overlooking the University’s Ezra and Cecile Zilkha Gallery to hear a talk by Brooklyn based artist Matt Keegan, entitled “Working Out the Structure.” Speaking in response to the Diane Simpson exhibition, currently on display in Zilkha, Keegan discussed his own career and inspirations as well as his collaborations and relationships with Simpson and other artists.

“[In] 2013, I got to see Diane’s first solo exhibition in New York City since 1980,” Keegan explained. “It was a very modestly scaled space, so it made for a very intimate exhibition. And for myself and for a lot of my close friends, the show was just a total revelation.”

Keegan and Simpson were introduced by fellow artist Kay Rosen, and Simpson eventually contributed to an issue of “==,” an art publication edited by Keegan, featuring interviews and exchanges between different artists. Instead of conducting a traditional interview, Simpson and collaborator Vincent Fecteau held a conversation through images alone, spending a month exchanging pictures with each other. The resulting stream of images, which can be viewed on Simpson’s website, is idiosyncratic and fascinating. Some connections between images—such as a photo of a chair followed by a painting of a table—are obvious, while others, like a painting of several items of clothing followed by a hamburger etched into glass, are more elusive.

As Keegan spoke about different aspects of both his and Simpson’s work, parallels and intersections between their artistic processes and interests emerged. One parallel comes from their use of two-dimensional drawings or templates to plan their three-dimensional sculptures.

“Two weeks ago, I met with Diane to prepare for this talk, and she established that she makes dimensional drawings that she does not consider to be patterns, which I thought was a really interesting differentiation,” Keegan said. “The drawings are more architectural and help Diane to determine how she will build her work. Drawing is about working out the structure of a sculpture. She emphasized that she doesn’t begin building until the drawing is strong.”

Keegan later explained his own process which follows a similar transition from paper to sculpture.

“Something that’s really important in relation to thinking about Diane’s specifications about pattern and template is that everything that I make starts as paper,” Keegan said. “So rather than it being drawn on paper, I actually make all of my cutout forms and cut paper like you would have done as a kid making a snowflake. And so, I make a lot of cutouts to figure out the fold, figure out the angle of the fold, and also to start to understand color application. I think of that, as a preliminary drawing process, even though, the drawing is fundamentally sculptural from the outset.”

Keegan also discussed Simpson’s strategic use of color in her work.

Keegan’s own exploration of color is evident in exhibitions like his 2011 show, “I Apple New York,” which combined photography, video, sculpture and found objects to examine the artist’s perception of his city.

“The year prior [to the show] I was teaching in San Francisco and it was the first time I was away from New York for an extended period of time,” Keegan said. “That distance allowed me to really have a physical distance but also an analytical distance to think about the city, and I started to formulate this show thinking about New York City in both image and in color.”

Keegan’s photographs of New York were mounted on steel panels painted in the same seven colors used to paint bridges within the city.

“So there’s actually a design commission that creates select colors that are applied to bridges like the George Washington bridge or the Hell Gate Bridge,” Keegan explained. “I was really interested in using this color system as a framing device of color that we only see from great distance or that we traverse. At the time, I was interested also in a federal color deck that establishes the green for highway signage to the yellow for traffic signage and much more and that research led me to this more local bridge-specific palette.”

Keegan’s interest in playing with language, color, and material are evident throughout his work. In his exhibition “Lengua,” Keegan created sculptures based around phrases from his mother’s English as a Second Language (ESL) flashcard set. In another exhibition, “I Wish to Communicate With You,” he combined his paper cutouts with Corita Kent’s silkscreened series, “International Sign Code Alphabet.”

Another consistent aspect of Keegan’s work that he emphasized was his interest in combining media, whether that be sculptures, photos, or video work. In addition to his persistent fascination with interrogating the language of his mother’s ESL cards, Keegan’s video “Generation” featured family members responding to differing prompts to define words, such as “Home” and “Mother.”

Throughout all of this work, processes of collaboration and exchange between fellow artists have been at the forefront. Keegan explained that a drive to create in continual conversation with others was, perhaps, the fundamental reason that he was an artist.

“I have a very analytical mind, and I want to talk with people all the time,” Keegan said. “So, it’s a profession and a way of understanding the world that’s contingent on conversation.”