2020 Oscars Recap: A Triumphant End to a Frustrating Awards Season 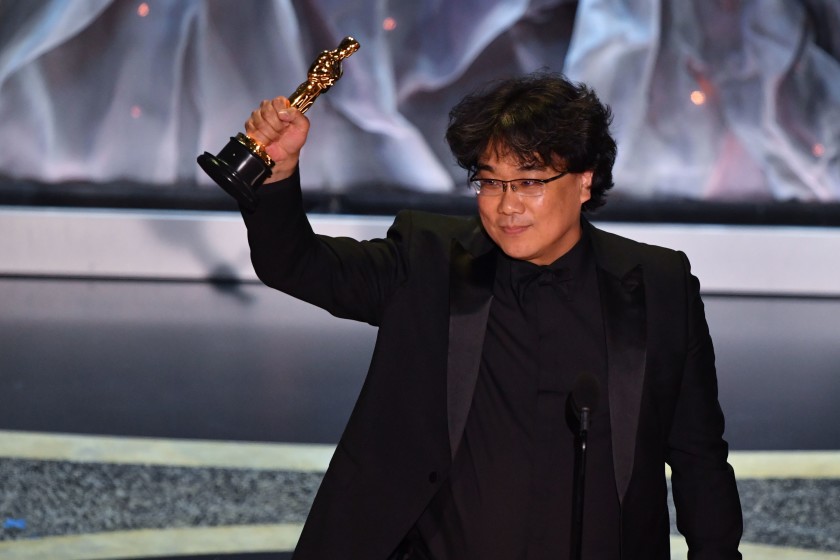 “And the Oscar goes to…” said Jane Fonda, opening the envelope to the Best Picture winner last Sunday night, pausing for a full three seconds before revealing the winner. She looked up from the paper, trying to hold back any emotion, but she must have been aware of the historical power of what she was about to say. Fonda looked away from the camera with the delight of someone withholding a great surprise, as if to taunt, “You won’t believe what I’m about to say. Really.” When she named “Parasite” as the winner, a roar of approval swept over the audience: a mixture of disbelief, joy, and utter satisfaction from nearly everyone in the room. The same thing happened at Film House at Wesleyan, at director Lulu Wang’s nearly all-Asian viewing party, and at probably the majority of households that were tuning into the telecast. It was if we were all thinking to ourselves, “So this is what it’s like, when the film that should win is the one that actually does.” Our mouths, unable to form words, just let out a collective gasp of giddy endorsement. I stared at my laptop floored by the news, as a crowd of Asian faces slowly made their way up to the stage.

Why was “Parasite” winning Best Picture so surprising? On the one hand, it faced multiple barriers to winning that have never been successfully crossed before: the South Korean film features an all-Asian cast, is spoken in nearly all Korean, and is a stunning portrayal of class warfare that serves as a critique of capitalism and of how proximity to whiteness and American-ness becomes success within a global marketplace. Before “Parasite,” a foreign-language film had never won over the Hollywood-driven Academy of Motion Picture Arts and Sciences. Even last year’s sweeping arthouse film “Roma,” which won Alfonso Cuarón Best Director and the then-named Best Foreign Language Film award, couldn’t win over the sentimentalist race-relations throwback “Green Book.” “Parasite” winning Best Picture was unprecedented territory for the ninety-two-year-old institution.

But as it’s become painfully clear this season, there are other reasons why a film featuring uniformly people of color would be far from what’s considered “Best Picture” material in the Academy’s eyes. The day that Issa Rae and John Cho (two wonderful actors of color) announced the nominations, it’s as if they were slightly embarrassed to be doing so: the sole acting nominee of color was Cynthia Erivo for portraying Harriet Tubman, and no women were nominated for Best Director. This was five years after the #OscarsSoWhite campaign had called attention to the utter lack of diversity within the Oscar ceremony (or the film industry at all, for that matter). And although “Harriet” was directed by the Black woman Kasi Lemmons and features a personal take on the historical story, I couldn’t help but feel that Academy voters barely scraped avoiding a lily-white crop of nominees by praising the performance of a sole black actress who was fulfilling the white fantasia of The Good Slave. It was like they were praising Erivo’s committed performance for all the wrong reasons.

The Academy knows it has a problem. Any neoliberal institution in 2020 realizes that celebrating white men exclusively is no longer socially acceptable, and must make attempts to push “diversity” and “multiculturalism” within its membership to simply survive the current cultural climate. That’s probably why producers paraded out actor-singers Janelle Monáe and Billy Porter—Black artists who’ve had much more creative and artistic freedom on television and the Internet—to appease some of the supposed Oscars naysayers. Behind them, Black men and women danced, donning the costumes of snubbed films: “Us,” “Hustlers,” “Dolemite is My Name,” “Queen & Slim,” “Midsommar.” Even Best Picture nominee “Little Women” was repped, as sort of a fig leaf towards not nominating director Greta Gerwig for her tremendous work at revitalizing and radically revising the classic novel. The whole opening veered between cringey and disturbing. Were we really asking queer Black artists to uplift and defend the very institution that couldn’t even award “Moonlight” correctly? The whole performance felt like an attempt to dispel the Academy’s own guilt.

But the Academy’s awkward embarrassment about itself feels trivial compared to the humiliation of actors of color who were entirely erased from the Hollywood stage. What about their performances? What about Lupita Nyong’o’s double-duty roles as both the horror movie heroine and antagonist in “Us”? What about Jennifer Lopez’s jaw-dropping physicality and sexuality in “Hustlers”? What about the entire cast of “Parasite,” who beat-for-beat display familial humor and ruthless drive simultaneously? For me, the snub that stung the most was Awkwafina’s layered performance in “The Farewell,” where she embodied director Lulu Wang’s own experience grieving her Nai Nai (grandmother) before her death. I had never before seen such a complex, sensitive, and trans-national exploration of the Asian-American experience. It’s omissions like these that make me want to boycott, or throw the Oscars away, or create my own awards the exclusively celebrate women and people of color. But the Oscars are so enmeshed within the fabric of filmmaking that ignoring them can prove impossible, or even deadly. And even I have to admit that without Oscar buzz, it would be highly unlikely that I would’ve watched “Parasite” at all in the first place, or even know of its existence.

The truth that I’ve arrived at is this: the Oscars have historically been less about awarding the greatness of actual films and performances, and more about rewarding the narratives around the films that feel the most comfortable and self-congratulatory to its members. Taking a look at the all-white winners of the acting awards this year, you can see actors themselves being cast in stereotypes and in tropes. Joaquin Phoenix becomes the fearless method actor who speaks to humanity’s darkness; Renée Zellweger becomes the triumphant returner with a comeback story to believe in; Brad Pitt becomes the veteran hot guy who effortlessly elicits an American cool; Laura Dern becomes the badass mom with a mid-career renaissance. These are stories that feel familiar; we’ve seen them before, we know them intuitively. “Asian woman / former rapper delivers dramatic turn” and “Latina superstar learns to pole dance” just don’t fit into these well-worn familiar ideas of greatness that Academy voters seemingly always fall back on. Even my friends of color, after watching “Hustlers” with me at the film series, turned to me and said, “That isn’t really an ‘Oscars’ movie.” We’ve been conditioned, ever since we started watching movies, to know what is worthy of our attention, and what is not.

But “Asian domestic drama that becomes nail-biting social thriller and incisive look on class warfare” doesn’t feel familiar either, and yet somehow, it won. Somehow, Bong Joon Ho became the first person since Walt Disney to win four Oscars in one night, swooping in to collect Best Original Screenplay, Best International Feature, Best Director, and Best Picture all within the course of a few hours. There’s a way in which Bong fulfills a certain archetype: he’s the bubbly comedian with great speeches, the underdog who can’t believe he’s made it this far with Tarantino and Scorsese, the breakout star of the season, the writer-director auteur with a vision. But I think that “Parasite” was simply so well-crafted, so expertly structured and shot, so flat-out entertaining, that the Academy for a second had to let go of its familiar narratives and prioritize rewarding greatness.

In my estimation, “Parasite” is nothing short of a masterpiece, a film that will be discovered, debated, celebrated, and re-watched for years to come. Other twisty thrillers this year, like “Knives Out” and “Us,” speak to the same issues of class warfare, divided nationality, and the extremes of poverty. Other films this year were also meticulously created (“Once Upon a Time… in Hollywood”), full of sharp humor and tragedy (“Marriage Story”), or prioritized women in the narrative (“Little Women”). But no other film even came close to combining all of these elements together to create the gut-wrenching, visceral, wildly entertaining rollercoaster that was “Parasite.” Academy Award voters, instead of resigning themselves to the inevitability of what was considered “Oscars material,” chose to celebrate the film they actually loved.

Of course, awards are not everything. Some of my favorite films of the past decade—“Eighth Grade,” “Columbus,” and “Support the Girls”—probably never even flew into the Academy’s radar. The Oscars are not everything; they weren’t even the only awards ceremony of last weekend. Even though it went un-nominated by the Academy, my favorite cinematic experience of the year, “The Farewell,” was awarded “Best Feature” at the Film Independent Spirit Awards.

But there’s something special about watching an Asian woman stand at the center of room full of people. She’s not only existing resiliently in the face of all the narratives that try to silence her—the room full of well-known actors and producers is in fact just lucky to have been in her presence. That happened with Lulu Wang at the Spirit Awards; it also happened with “Parasite” producers Kwak Sin-ae and Miki Lee as they rose to the stage to receive their Best Picture statues. The Oscars still has a long way to go to make the “Parasite” win not surprising, but an expectation: the best film should win the highest award, no matter where it comes from or who’s in it. The Oscars telecast producers tried to cut off Miki Lee before she was about to speak, turning off the stage lights, to which the entire crowd of Hollywood elite roared to bring the lights back up.

Everyone in the room knew they were just lucky to get to witness this woman standing before them. I hope that we’re lucky to see more women like her onstage again. Maybe one day it won’t even come as a surprise.