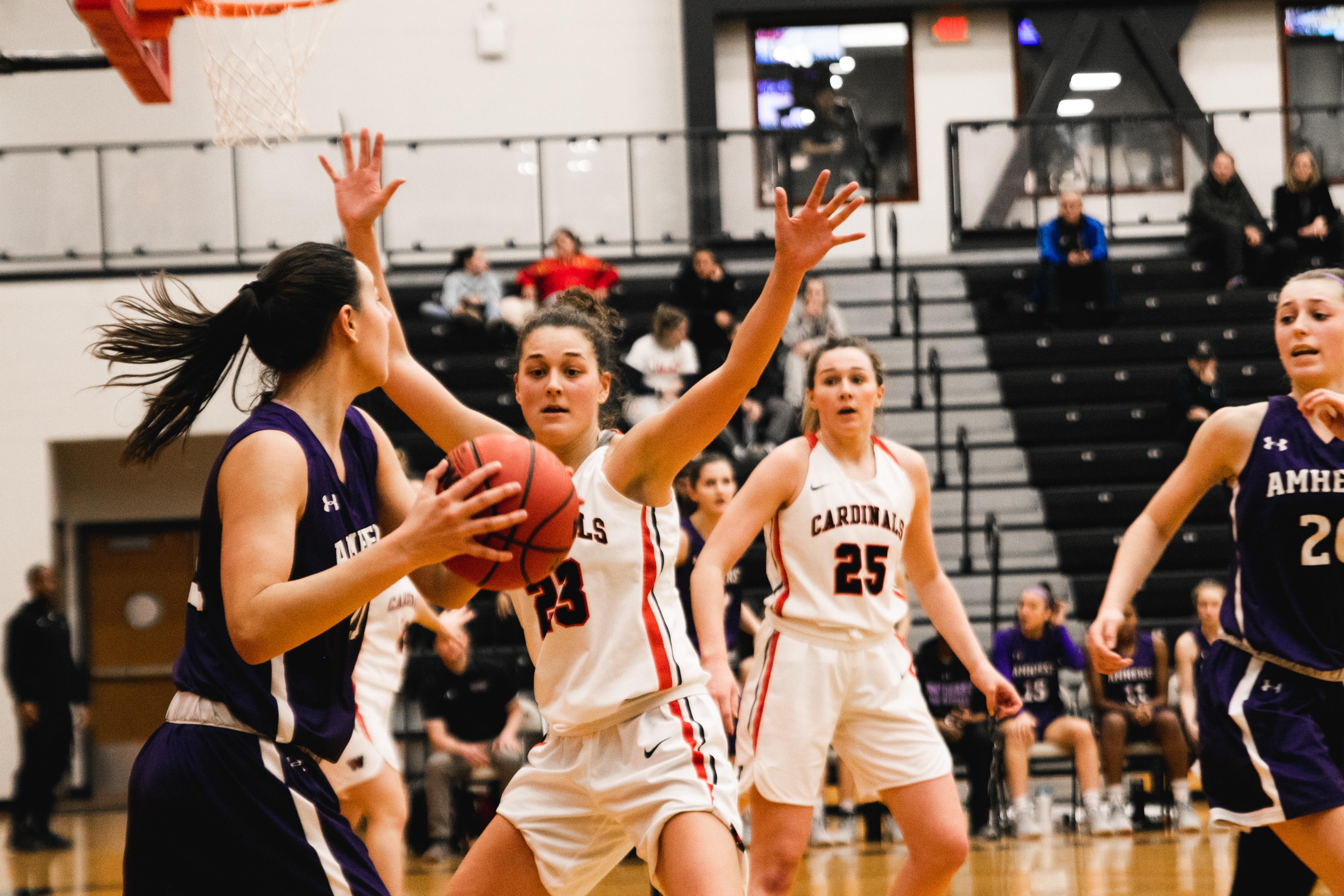 The women’s basketball team is driving down the home stretch with only four games left in the regular season. After twenty games, the Cardinals sit at 1–5 in conference play and 11–9 overall, good for the seventh best record among NESCAC teams.

So far, they’ve had an up and down season: a six-game winning streak, then a two-game loss, followed by another two dubs before dropping five in a row. Every time the Cards have won or lost they have done it in groups of at least two, never having an isolated outcome.

The latest of these streaks is a recent 2–game loss against Little Three rival No. 8 Amherst and Hamilton. Both of these games were played at home in Silloway Gymnasium. Before the two game skid, however, the Cardinals had won a close game against the Massachusetts Institute of Technology, marking a three-game winning streak. The game started out in troubling fashion, with the Cards falling behind 18–12 after the first quarter, but the Cards were able to rally and achieve a 26–26 tie by halftime.

“How we had played in the first quarter—specifically defensively—was not how we wanted to continue throughout the game,” Senior Ava Tompkins told the Argus. “We needed to lock in on defense and get stops in a row.”

The team gave what Tompkins thought they needed, holding MIT to 26.7 percent shooting from the field in the second quarter and just 36.7 percent for the entire game. The Red and Black also got out front on defense, giving up only two fast-break points all game and forcing the Engineers into a negative assist-to-turnover differential.

The offense came out strong in the second half, with the Cards scoring a game-high 21 points in the third quarter on the way to a 65–60 victory. Tompkins led the team in rebounds that night, posting a 5–6–11 in 32 minutes played. Marina Petruzzi ’21 continued getting buckets, posting 18 points on an efficient 50 percent from the floor. The play-making was handled by Caleigh Ryan ’22, who finished two dimes away from a triple double at 10–8–10. 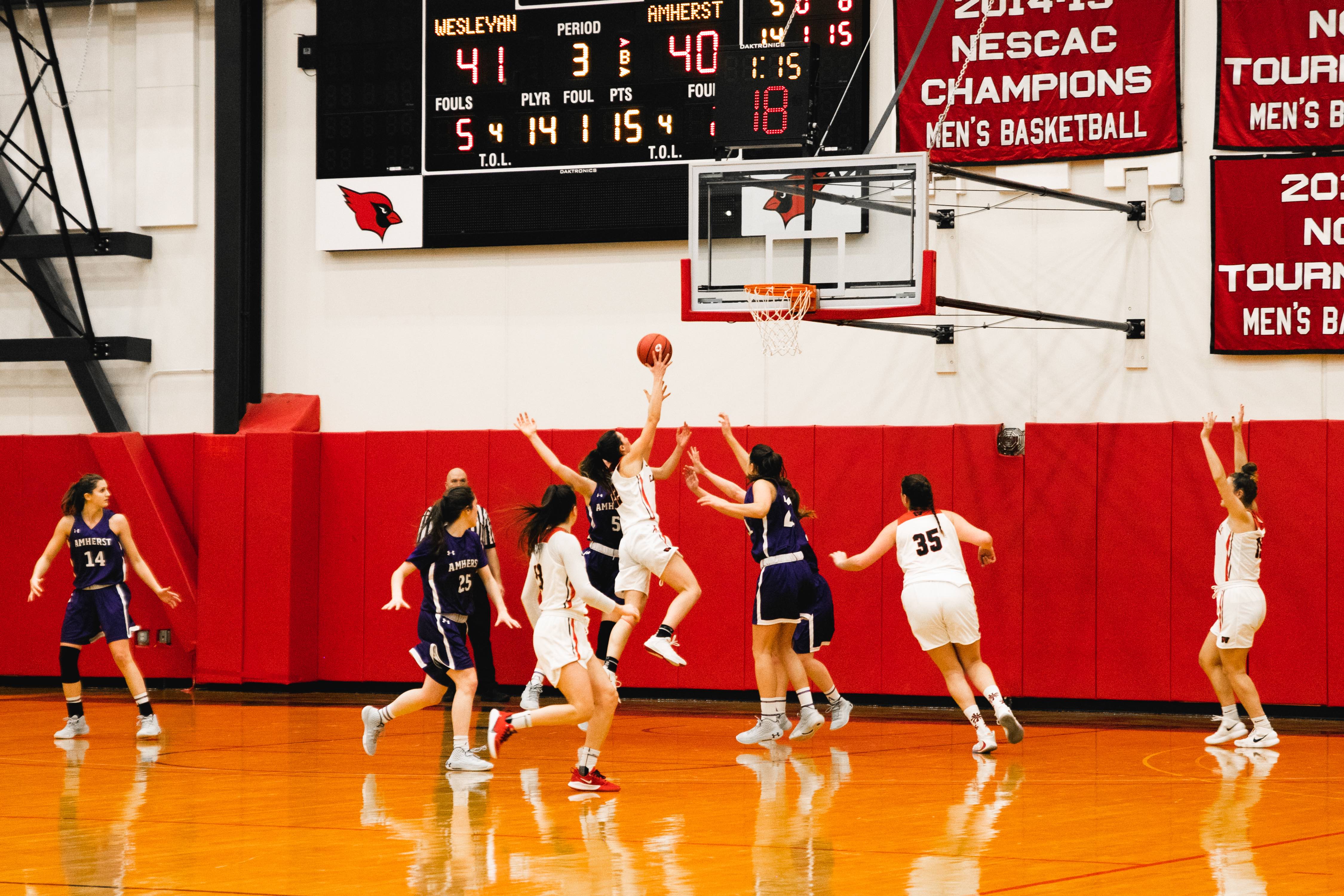 The next game, a rematch against rival Amherst who beat the Red Birds 67-50 just two weeks ago, was just as close. Both teams came out of the gate hot. First-year guard Maggie Lee ’23 doubled her average scoring output by putting up eight points in six minutes. By the end of the first quarter, the score was 19–18 with Wesleyan ahead. The game grinded to a halt in the second quarter, and after an Ava Tompkins tip-in just before the half, the Mammoths and Cardinals were tied at 27. The third quarter saw the starters evenly distribute the scoring load to go along with shooting 70 percent from the floor. The third quarter ended with the Cards leading 45–42, but that was the high point for the home team, as Amherst came back to win 53–49.

“The key reason we lost the Amherst game was because we struggled to score in the 4th quarter,” Tompkins said. “We were taking shots we tend to make in practice and in games, and we simply could not make them on Friday night.”

All four points the Cards scored in the final quarter were by free throws, as the team went 0-10 from the field.

“The difference was our ability to make shots, defensively we did our job, but we couldn’t make up for it on offense,” Tompkins said.

Amherst had no second chance or bench points, and were out-rebounded 44-32; yet the Mammoths had 17 points off of turnovers and got to the free-throw line 23 times, making 18 of them.

Despite tough recent losses, the Cardinals remain undeterred with good reason. The sophomore duo of Petruzzi and Ryan are combining for almost 28 points per game and the defense continues to be stout, with the team holding their last five opponents to 60 points or less.

“We are a very resilient group and we care so much about each other and the game,” Tompkins said. “I see us fighting until the end and making a comeback for NESCAC playoffs.”

Rocky D’Antonio can be reached at rdantonio@wesleyan.edu