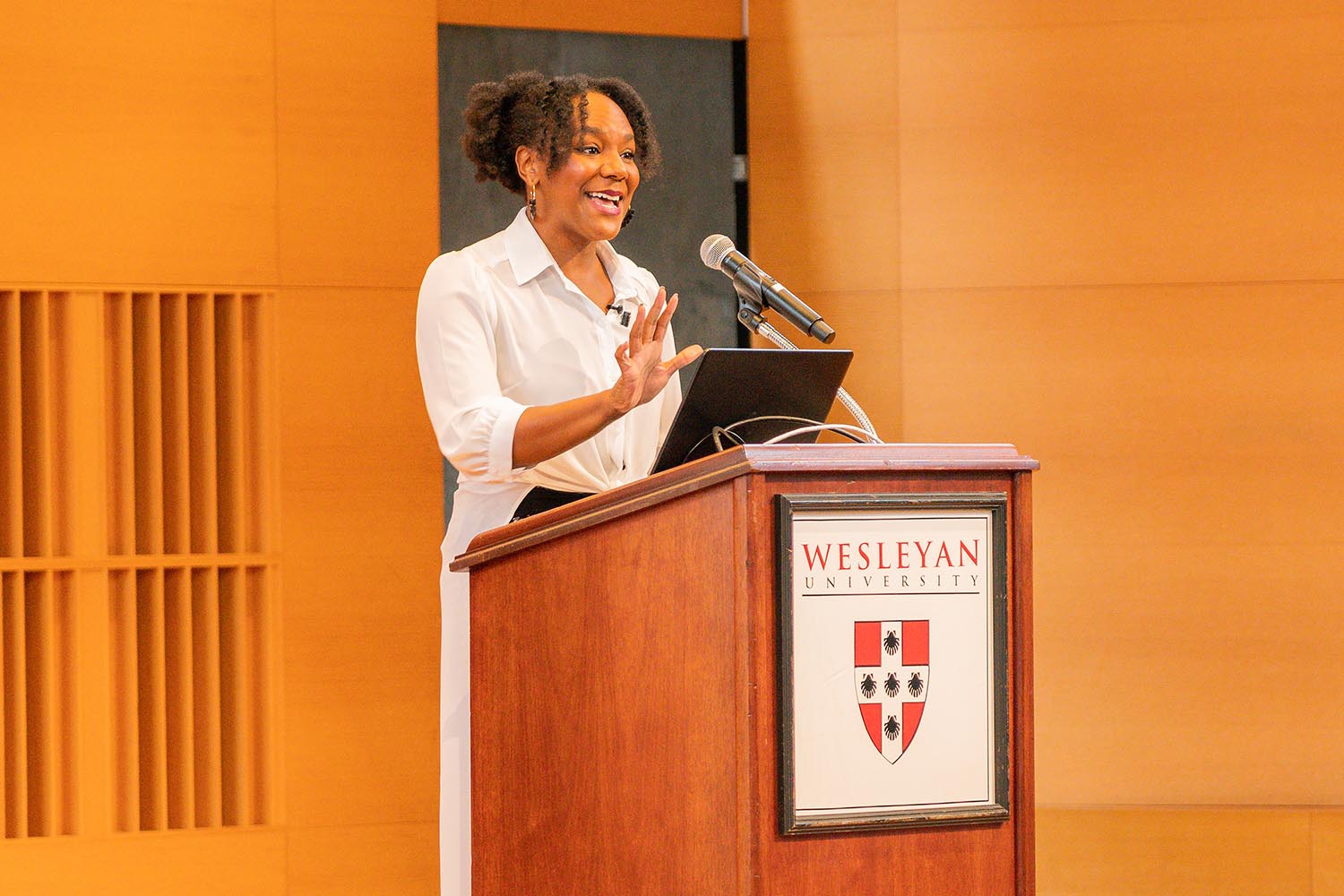 The annual MLK Commemoration featured keynote speaker Bree Newsome and was held on Friday, Jan. 31st in Crowell Concert Hall. The event is held every year to honor Reverend Dr. Martin Luther King Jr. and his contributions to the fight for civil rights.

At the start of the event, Director of the Resource Center Demetrius Colvin shared a few words and led the audience in song.

“I think there’s something about music to move and shift a space that not much else can do,” Colvin said.

The song, titled “I Love Everybody (In My Heart),” is a civil rights protest song that Colvin grew up singing in church. After the group performance led by Colvin, he explained the interconnectedness of spirituality and social justice.

“For me, it was that moment of clarity, of how important spirituality is to social justice,” Colvin said. “Because the things that we see, the things that we hear, tells us there is nothing but gloom and doom. There’s just sadness and pain and people got comfortable with sadness and pain…. The sadness, the pain, and the generational trauma of having to make this social experiment work each and every year when you have so many disconfirming evidence that it doesn’t, that can weigh on people. That can make you feel apathetic. That can make you feel like not only do you not love everybody, you barely love yourself.”

Colvin then explained his interpretation of love in the protest song, explaining that it outlines a political and moral purpose for communities.

“The love that I believe that song and those people were talking about is the love to hold people accountable,” Colvin said. “It’s the love to not to shy away when things get difficult. It’s the love to say you need to come back into community, not just go outside of it.”

Following Colvin, Vice President of the Office of Equity and Inclusion Alison Williams gave a brief address to the audience in which she explained the significance of Newsome’s work. Newsome is a writer, producer, and activist who gained national attention after removing a Confederate battle flag from in front of the South Carolina Capitol building by scaling a flagpole.

“This happened, ironically, a day after President Barack Obama gave a eulogy for State Senator Reverend Clementa Pinckney, one of the nine people gunned down by Dylan Roof in the church in Charleston, South Carolina,” Alison Williams said. “And on that day, the flags of the United States and the state of South Carolina flew at half mast, but the confederate flag flew at full mast. Even as Reverend Pinckney’s casket was being wheeled through the streets. So Bree Newsome went and took down that flag.”

After Williams’ address, Assistant Director of the Jewett Center for Community Partnerships Diana Martinez read a segment of a speech  King gave when he visited Wesleyan during the 1964 commencement.

“This song has the ability to revive the past, while at the same time, it reminds and reinforces the idea that there is a whole future that will come of it if we continue to do work and support each other,” Dudley said.

Ujamaa board member Langston Morrison ’21 then came on stage to welcome and introduce the keynote speaker. He introduced Newsome’s activism and her talents in music and writing, including Newsome’s film “Wake,” which won several awards.

Newsome began her speech by outlining two topics she would address: awareness—its definition and its value—and how to use that awareness to advance society.

“I think it is important to acknowledge that reality exists independently of our awareness of what reality is,” Newsome said.

Newsome explained that she recognizes structural racism and white supremacy as relatively modern concepts and that pre-colonial societies did exist without the pervasive systems of oppression we see today. She notes that those societies are actively hidden by those who wish to promote white supremacy as a “natural order.”

Newsome knows awareness is a choice to switch from “unconscious” to “conscious.” She explained that the Moral Monday movement in North Carolina was one of her first introductions into civil rights protests. She then began grassroots organizing after the Ferguson riots in preparation for similar protests coming to Charlotte. Newsome also gave more context to the moment in 2015 when she removed the confederate flag.

“I did not actually hop up that day and do that all on my own,” Newsome said. “It really was a collective of people working together. It was a multiracial effort…. People started toppling confederate monuments everywhere and monuments to colonialism.”

Since its institution, Martin Luther King Day has become mainstream in a way that some politicians can pause and celebrate it and then continue to dismantle civil rights in their day-to-day.

“It’s a good thing that this time of year has become not just a day, but a season of reflection on the life and philosophy of King,” Newsome said. “Even if certain figures seek to co-opt and dilute King’s message, it only provides opportunity and reason for us to reclaim and reassert that message as the radical, empire-challenging message it is.”

She explained that the civil rights movement did not start and end with Martin Luther King. There were many localized movements that took on different strategies, including litigation and the traditional protest.

Newsome also categorizes Dr. King as an anti-colonialist and explained how important it is not to water down this history.

“He is speaking to the way in which we must extricate our minds and our hearts and our spirits from the violent and destructive practices of colonialism,” Newsome said.

Newsome also recognizes how colonialism is embedded into our perception of international conflict, who we see as perpetrators of violence, and how social justice needs to move away from those perceptions.

“This current conflict over borders is a reminder that humanity and human rights have to transcend borders and continents and nations,” Newsome said.

Newsome finished her speech with a discussion of what it means to have courage.

“I’ve been praised a lot for my courage,” Newsome said. “But I want to point out that courage is not about the absence of fear, but rather the belief in something greater than that fear and a determination to fight for it.”