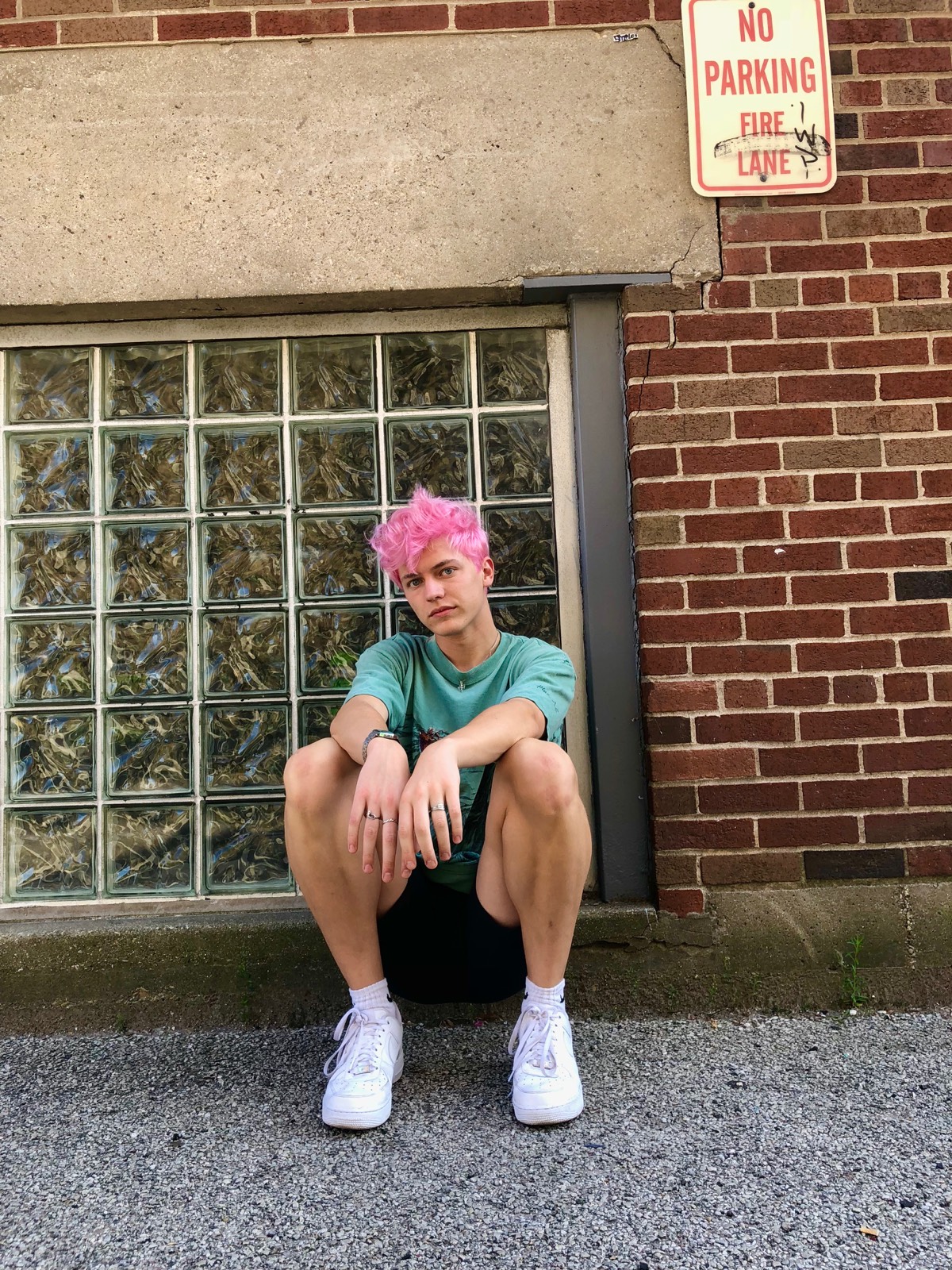 Quinn Tucker ’20 describes themselves as a controversial mix of loud and quiet side. They used to be an athlete, waking up early most winter mornings to swim. Now, they are working on a film thesis, developing a taste for fancy wine, and looking for a new statement piece for their eclectic wardrobe. The Argus sat down with them to discuss their time at Wesleyan, opinions about film, and former sports career.

Quinn Tucker: I don’t know. I’ve hopped between both sides of campus. I used to be an athlete, and I live with loud side people, so I feel like I’ve done both loud and quiet side things. I do film and photo, and I tend to just have a very loud presence in a lot of public spaces. I make a point of trying to meet a lot of people and just explore Wesleyan as much as I can. I have a tendency to draw attention to myself.

A: Your nominator mentioned something about earmuffs. Can you explain that?

QT:  Another thing that I do is I often pick a statement piece thing [of clothing]. One year it was my big green trench coat and then my new thing, even though I’ve lost them, were these bright pink fluffy earmuffs, which I want to be a new thing. They’re honestly the best purchase that I’ve made in a while. Your ears lose so much heat and they made such a difference in the winter weather. I ten out of ten would suggest earmuffs as a potential winter wear purchase. And they’re affordable! That was definitely an overstated fashion choice for class. I’ve gotten comments from professors on it as well.

A: You’re into film studies. I heard you are working on a thesis?

QT: We just wrapped production during finals. I directed and wrote my thesis film last semester and now I’m editing it, which is really stressful, but a beautiful experience. I really had a great crew and cast that was all student run, and we shot pretty much everything on campus, which is nice.

QT: I took the Language of Hollywood intro class my freshman year on a whim. I didn’t come to Wesleyan to be a film major. I worked [on] a set my sophomore year and I was like ‘huh, I really haven’t enjoyed studying anything other than film at Wesleyan.’ Like, I enjoyed the government major, but film really just stood out to me. Something about the collaborative element, like I had been doing art in high school, but there’s something about the collaborative element of all the moving pieces really working together, and it’s really a group art form, that [was particularly interesting to me]. Other art forms include a lot of group work, but there is a sort of individuality [about film]. Even though it kind of centers on the director, there’s something about film that has this beautiful collaborative aspect that you really need everyone to be able to work under one vision, but everyone really contributes something of their own personality and brings their own personal taste into the larger piece. It isn’t like, no matter how much you want to be about a director or writer, it really is so much of a team effort. If one sprocket or something, even at the bottom level goes wrong, the whole production can fall apart. And just learning that and being like this is a creative outlet that I also can do professionally, it took me a while to find until sophomore year.

A: Switching to athletics. You were on the swim team?

QT: I swam for two years, which is either how people know me or something that surprises people. I’ve been swimming all my life. I miss being in the water. I don’t miss swimming itself, like competing or anything, but swimming was a big part of my life. The winter season is a depressing time. Like, waking up early and being in the water at 7 am. I am not a morning person and the joke was when would I start talking in the morning. I would refuse to speak in the morning and it’s kind of a similar thing in this house. It’s always funny to me that I was on the swim team. I was an athlete and ate dinner with my team on the loud side. It was a whole part of my life that feels like so long ago, but it really wasn’t. It was overall a positive experience. I met a lot of my best friends through the team and lived with one last year even though I wasn’t on the team. I don’t know how to elaborate on that. I’m honestly confused that I was on the swim team. The whole me doing sports thing is almost like an ironic joke at this point.

QT: [Laughs] Is everything booze and sports? I sound like a terrible person. I really love wine. I didn’t grow up drinking wine, but my family has always been big wine people, and over the summer I worked at this wine shop/wine bar where I had to learn. I would help run tastings, I would serve people wines by the glass, and also sell full bottles. I got really, really into wine and the process of how different regions and how the soil and the heat can all affect the flavor of the grape. Even though it’s this pretentious and minute thing, there’s something beautiful about the process and the fact that during a certain season with a certain type of rainfall, and what soil it is, and how hot it is can affect the alcohol content of the grape, and therefore you get these flavors and in certain southern regions of countries you’d get other types of wines. That process, along with the physical and social experience as well, is something that I’m really into, and I plan on—after leaving college—doing my sommelier training along with whatever I’m doing. I’d love to work in the industry at some point, but not immediately. I really love wine and I now have an aversion to Franzia boxed wine. It’s a blessing and a curse because I can’t really afford to drink the wines that I used to because I don’t have a discount on them.

A: What are your plans for after graduation?

QT: I don’t know. I want to do something in the film and entertainment industry. That’s my goal. Preferably New York, but I’m not going to set myself on that. I’m just following where I can get employed at this point. I want to work in production and pre-production creative side of the industry. I am also looking into more documentary and news stuff as well because I really love travel. Documentary and news stuff tends to allow you to do projects that you would end up traveling for. There’s also a side of me thinking that I should just up and run away and leave the country and just move to somewhere random and pick up work there. Maybe pursue, like, wine training in France. Like find something obscure and just leave. But yeah that’s the plan, something spontaneous. I don’t really know what I want to do, so I’m just being comfortable with using my twenties to figure it out. I just have to be employed, that’s the central factor, and we’ll see where that takes me.

A: So films, what’s your favorite movie or movie you’ve seen recently?

QT: I could get so much heat for any of my answers. I recently rewatched Parasite and I’m just in love with that film, which I think everyone should see. But favorite movies include, well my childhood classic is “Breakfast at Tiffany’s” which is like such a simple one. But “Thelma and Louise” and “Heathers” really inspired my thesis film. I watched “Hustlers” recently and loved it. My hot take is that I didn’t really like “Uncut Gems”, which everyone in the department did and now I feel like a bad person. “Tampopo,” it’s this Japanese film that everyone should watch. It’s called a ramen Western instead of like a spaghetti Western. “Clueless” is a classic. Hot take, “Spy Who Dumped Me” is an amazing movie and no one can change my mind. Yeah, I’ll stop there before I really dig myself into a whole. I could go on and on.

A: Who do you think was snubbed for Oscar nominations?

QT: Let’s not even get started on Greta Gerwig and diversity in the Academy period.  I don’t think “Once Upon a Time in Hollywood” deserves any attention, I thought it was terrible. I also just despise Quentin Tarantino, like I’m literally not named Quentin because my dad was like ‘we cannot name our child after Quentin Tarantino.’ So there’s that. There were no female directors nominated and there were so many good films this year. It was a weaker year over all but like the Academy just refuses to address anything.

A: How do you think you’ve changed over the years since you’ve gotten here?

QT: I really think going from like ‘I’m going to be an Econ major and do sports’ to ‘I’m now a film major and I dyed my hair pink’ was kind of like a really obvious transformation. I hated numbers and felt very much stuck in a box for a while. And then at Wesleyan, I was able to like go through this path of self-discovery that wasn’t exactly the easiest thing ever. Like all the things in my past, like swimming and Psi U are things that I did that I’m thankful I did, but I’m glad that now I’ve moved on and have become a better person because of it.

Olivia Ramseur can be reached at oramseur@wesleyan.edu