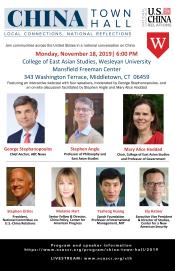 The University hosted a viewing and discussion of the National China Town Hall webcast hosted by George Stephanopoulos of ABC News in the Mansfield Freeman Center for East Asian Studies on Monday Nov. 18. The webcast was presented by the National Committee on US-China Relations and Wesleyan was one of over 85 participating institutions.

“The state of Sino-American relations have an impact on nearly every human being in this country,” Stephanopoulos said. “The National Committee has gathered here for this town hall to bring you a variety of views about the relationship and encourage all of you to engage with other members of your community about issues raised during our conversation.”

The town hall featured four panelists: Senior Fellow and Director of China Policy for the Center for American Progress Melanie Hart, Professor of International Management at MIT Yasheng Huang, President for the National Committee on US-China Relations Stephen Orlins, and Executive Vice President & Director of Studies for the Center for a New American Security Ely Ratner. After the webcast, the Chair of the University’s College of East Asian Studies Mary Alice Haddad and Director of the Center for Global Studies and Mansfield Freeman Professor of East Asian Studies Stephen Angle facilitated a discussion about it.

Throughout the town hall there were four major topics discussed: the differing perspectives of the United States and the Chinese government, the Hong Kong protests, China’s increasingly authoritarian government, and North Korea.

Panelists first touched on how these differences between the United States and the Chinese government have complicated their relationship.

“The U.S. and China have very different political systems and very different economic systems,” Hart said. “We are two different countries with our own views of the world. I think resolving our differences isn’t the measure of success—rather, finding a new equilibrium where both countries can coexist in ways that, at least from the U.S. perspective, protects our national economic prosperity and national security doesn’t necessarily require reaching an agreement with China.”

One question raised was whether the United States should engage with China at all. While there was not much discussion about this during the webcast, Angle touched on it as an example of his frustration with a lack of diverse viewpoints in the webcast during the following discussion.

“I think it was striking the lack of variety of viewpoints expressed on the panel,” Angle said. “I think the more-aggressively-disengaging-from-China viewpoint was not really there…. The focus on ourselves could be compatible with disengagement, but it didn’t seem like any of those people were interested in this view.”

Secondly, the panelists discussed the on-going anti-government Hong Kong protests. Panelists focused on the question of how media outlets have portrayed the protests and what impact this has in China. Orlins commented on how sympathy for the Hong Kong protestors has seemed to wane in mainland China given the escalations of the tactics used in demonstrations. Yet, Orlins also said that the force employed by the Hong Kong police has also not been sufficiently reported on in mainstream media.

“What’s happening in Hong Kong is a tragedy, and we have underreported the violence of the demonstrators,” Orlins said. “Mainstream media has not shown that, actually, the Hong Kong police have responded with considerable strength.”

This discussion of the Hong Kong protests led then to the question of whether the protests pose an existential threat to mainland China, and tensions surrounding Taiwan’s fraught relationship with China.

Despite this, all of the panelists seemed to agree that the protests do not pose an existential threat to mainland China, citing also that China’s mainland population does not readily support the protests.

The panel then shifted to discussing the developments of the Chinese government toward authoritarianism.

“China is employing high technologies to advance authoritarianism, social control surveillance, and other modes of monitoring and the degree to which those types of techniques are spreading outside Xinjiang into other parts of China, and are starting to be exported into the developing world,” Ratner said. “I think that’s a serious problem for the United States and one that the United States should be tackling in a variety of ways.”

Lastly, the panelists discussed the issue that North Korea poses for both the United States and China individually as well as challenges to the Sino-American relationship.

“Chinese concern is twofold,” Huang said. “One is the destabilizing effect if North Korea falls apart. The other is losing this buffer zone between the United States and China, they view North Korea as a buffer zone.”

Ratner also discussed possible U.S. policy options with regard to China in terms of the conflict over North Korea.

“We can engage the Chinese on this issue and we can hold them to account and apply punitive actions when they go against international law, so we need to be doing all these things,” Ratner said. “I think the Obama Administration had this policy on the right track or the end, and Trump has taken it off on almost every parameter.”