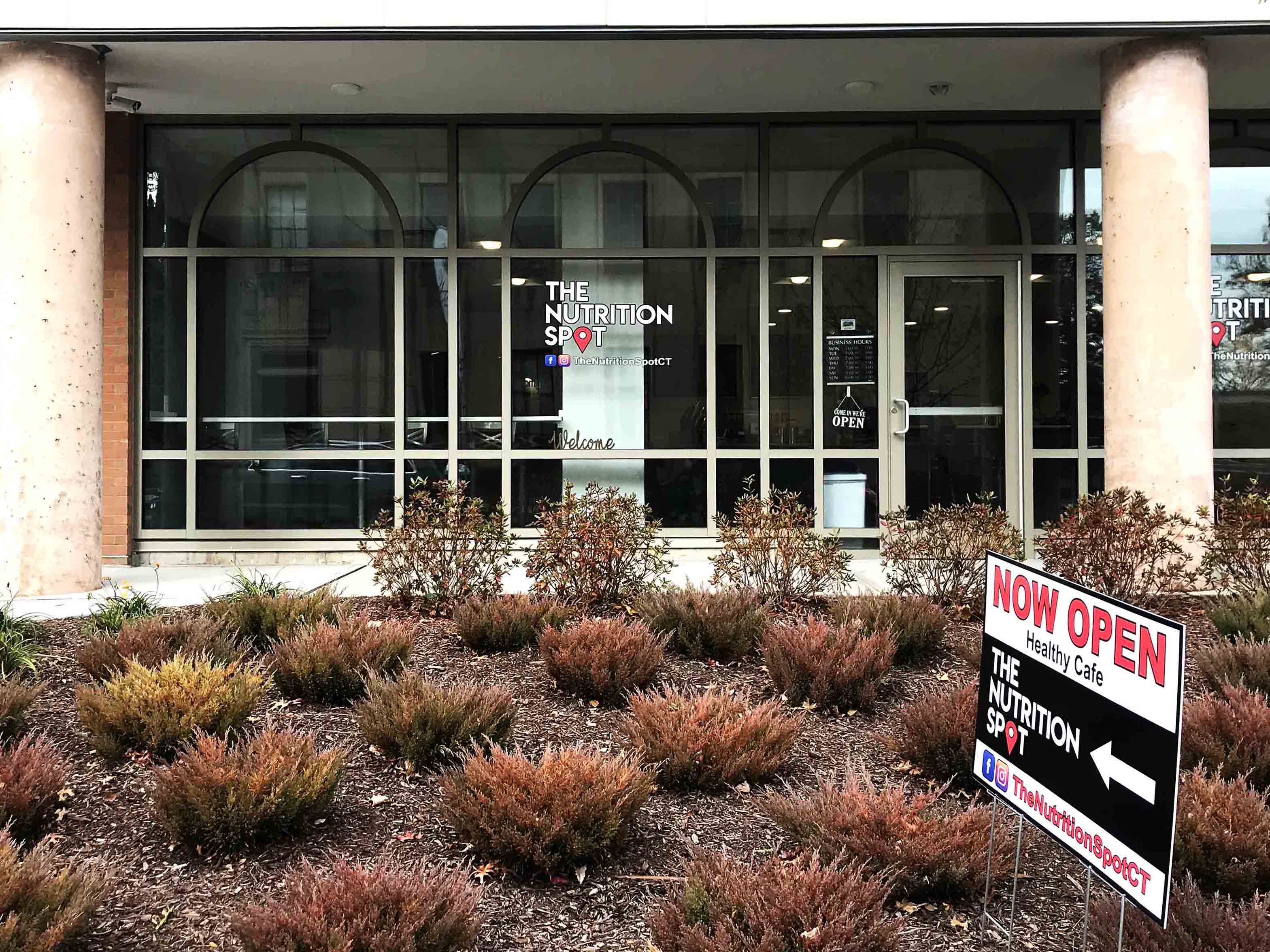 On Sept. 30, 2019, Middletown welcomed a new smoothie bar to the area. Located on the first floor of the new Midd-Town Apartment building, Nutrition Spot, LLC is, by all appearances, serving up tasty protein smoothies and colorful energy teas all day long. The spot is owned by Connecticut native Beth Gyngell, who quit her corporate desk job five years ago to start her own business.

With over 30 smoothie and tea flavors to choose from, the options are endless. Some of the most popular flavors include decadent red velvet, rich puppy chow, and fruity pebbles that tastes like milk at the bottom of the cereal bowl. The Nutrition Spot boasts that the majority of their shakes are low in calories, usually ranging from 220 to 330 calories. Upon talking to Gyngell, I was able to try a red velvet shake, which tasted like an indulgent dessert rather than a protein smoothie. The smoothies are not solely made from whole fruits and vegetables—the main ingredient is a protein powder distributed by international corporation Herbalife.

“I’m an Herbalife distributor and that’s what these smoothies are made out of,” Gyngell explained to me. “It’s essentially all very healthy smoothies. It’s protein-based, plant-based, low in calories, low in sugar, low in carbs, high in taste.”

“Multi-level marketing companies sell their products or services through person-to-person sales,” the Federal Trade Commission site reads. “That means you’re selling directly to other people, maybe from your home, a customer’s home, or online.”

Herbalife calls their members “independent distributors,” encouraging them to be independent business owners through the purchasing and selling of these products. Although the company has been around for nearly 40 years, it came under fire in a 2017 documentary called “Betting on Zero,” where investor Bill Ackman accused the company of being a pyramid scheme, meaning a business model built on recruiting new members, rather than selling goods or services. Following these allegations, Herbalife paid 200 million dollars in fines to the U.S. Federal Trade Commission and was ordered to restructure its operations immediately.

According to the documentary, in addition to selling their products to family friends, many Herbalife distributors chose to take their business in another direction by opening up something called a “Nutrition Club.” These clubs are a way for distributors to introduce and sell their products and inventory to customers, as well as offer various fitness activities.

“I was very fortunate to have the opportunity to go for it,” Gyngell said. “I was able to take that huge leap and go into business owning. And, I really couldn’t have found a better spot. Middletown is just such a great town for it.”

There are a handful of other clubs in the surrounding area, including Happy’s Nutrition in East Windsor and Seaside Nutrition in Milford. These clubs are governed by a long list of rules mandated by Herbalife.

To that end, any signage cannot imply that Herbalife products are being sold. When you walk past The Nutrition Spot, their single sign advertises that they’re a healthy café, not an Herbalife nutrition club.

“Club customers should be attracted to a Club through personal invitation,” Herbalife’s Nutrition Club rules read.

Gyngell said that while she distributes Herbalife products, her work is not confined to that role.

“It all boils down to healthy options for the community, a community-based area,” she said. “That’s what most of [the clubs] are, too. I can’t say for all of them, but for the ones I’ve visited, we just want a community feel. I do have a team, people who want to make a little bit of money on the side by offering these products to their friends and family. That is something I do have in addition to this because there is [speaking in third person] Beth, the distributor of Herbalife, and Beth, the owner of the Nutrition Spot. Those two titles are separate people.”

After growing up in Connecticut, Gyngell came back to Middletown to open up the spot.

“I’ve always loved Middletown, just growing up and turning 21 and going to different bars around here,” Gyngell said. “I’d already loved Middletown, and I knew that it was lacking a healthy protein smoothie-type shop. This location kind of fell into my lap and everything kind of lined up, and it made a lot of sense to offer this product to the community.”

Gyngell’s employees at The Nutrition Spot also work as Herbalife distributors, which means that the hires she has made must sell the products on their own. Middletown residents may still be able to join her team, but that means they would have to invest their own money to buy Herbalife inventory before they could start selling; the cheapest option, an “International Business Pack,” starts off at $94.10.

However, Gyngell says her goal is not to directly recruit people to her team, or even ask them to buy Herbalife protein powders.

“I’m not looking to steer anyone into breaking the bank here, or unreasonable expectations,” Gyngell said. “When you walk through the door, I’m not here to be like, ‘Herbalife, do you want to buy the products and invest the money?’ I’m really just offering whatever it is, meal in a cup, energy drink, some clean, nice, healthy sustenance for you.”

Gyngell is no stranger to the backlash that Herbalife has received in recent years.

“When you see the stuff with Herbalife, you gotta take the good with the bad,” she said. “I can’t say that people will take the business opportunity and make bad decisions with it. We’re all different people, and we all do different things with opportunities that we have. It’s really just what do you want to do with the opportunity at hand, if you want to get involved.”

So far, the community does seem to be loving the smoothies and teas. The Nutrition Spot Instagram page, @thenutritionspotct, has 430 followers, and the Facebook page has 480 Likes. The most popular smoothie flavor recently has been Red Velvet, and their “Captain America” tea, with hints of blue raspberry, has also been popular. Gyngell promises that her products will boost your energy, and provide you with undivided focus. Herbalife claims that their products can also act as full meal replacements.

“I’ve actually been able to lose 35 pounds, and added 15 pounds of lean muscle,” Gyngell said. “I’ve been able to gain so much more strength with it. For me, that’s also translated into a bunch more confidence…. Being able to consume these products has really been able to not only help me lose weight and gain muscle, it’s also given me a different outlook as to the positivity in life. People who are now in my circle of influence are kind of high-frequency people that really just want to impact with health and wellness, or they’re in the same values of, ‘I want to feel good and be around people who also want to feel good.’”

Feeling good is what Gyngell hopes The Nutrition Spot and its Herbalife products will do for the Middletown community.

“I’m not a salesperson, I’m more of a sharesperson.” said Gyngell, “I’ll let you know what it has done for me, but I’m really just here to share.”