Producing “The Laramie Project”: Crew and Cast on the Theater Department’s Fall Production 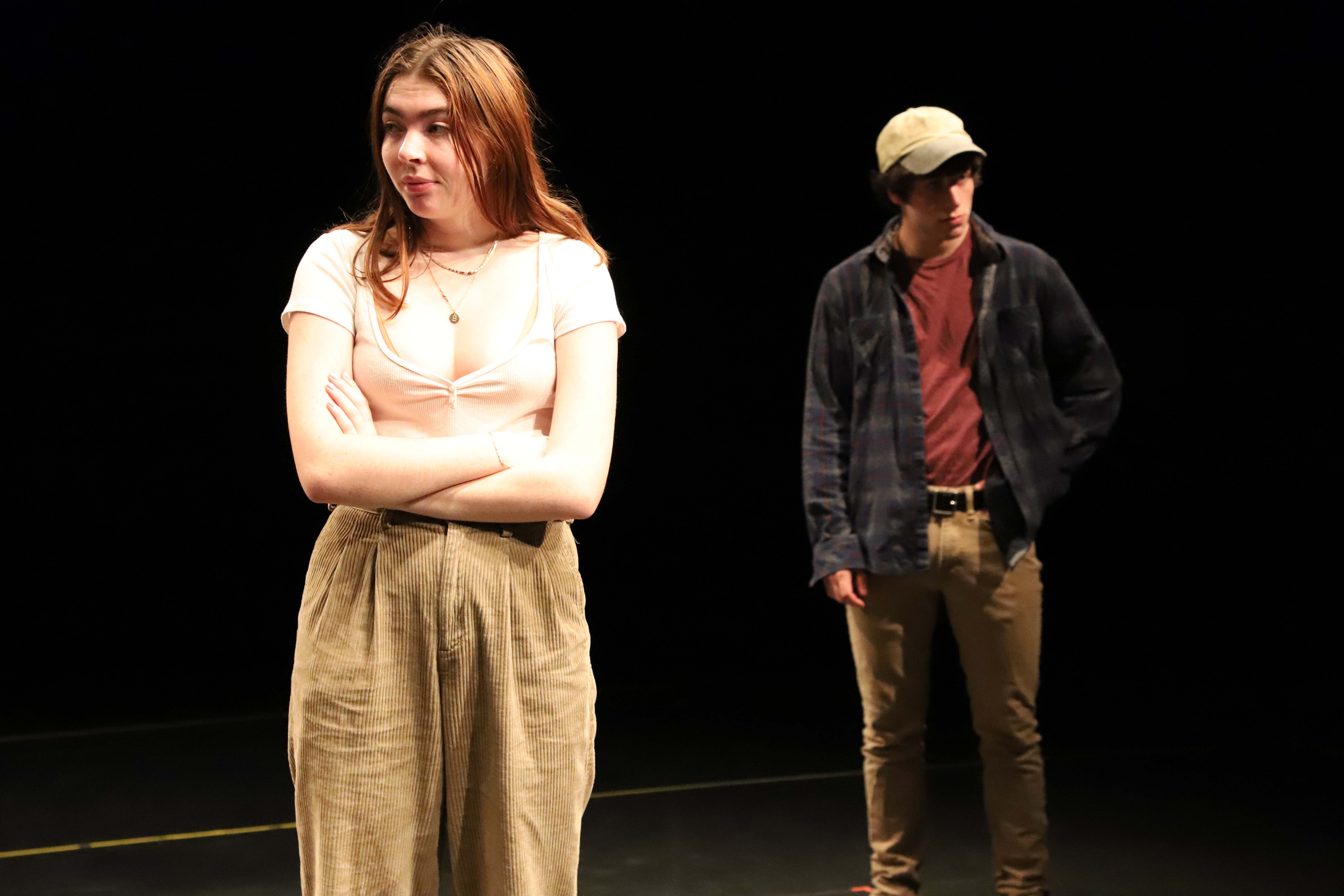 Note: Nathan Pugh ’21 is an Assistant Arts & Culture Editor at The Argus.

Written by Moisés Kaufman and Members of the Tectonic Theater Project, “The Laramie Project” depicts the city of Laramie, Wyo., after the death of Matthew Shepard. Shepard was a gay student at the University at Wyoming who was beaten, tortured, and eventually killed in a homophobic hate crime in October 1998. Kaufman and members of the Tectonic Theater Company traveled to Laramie to talk to members of the town, hoping to understand how this murder could have happened. As a piece of queer documentary theater, “The Laramie Project” uses direct quotes from these interviews to give voice to the people of Laramie in the wake of Shepard’s death.

Assistant Professor of the Practice in Theater Eddie Torres leads the charge of this fall’s production. As the director, he works with a cast of student actors, along with a production team that includes both faculty and student assistants. All students involved with the production are awarded academic credit in the Theater Department.

This cast of 12 students has worked about 26 hours per week since receiving their parts. Although it’s a rigorous schedule, the added rehearsal hours allow the cast to spend extra time with the team, script, and, most importantly, their characters.

“The Laramie Project” is unique in its form, not only for its documentary aspects, but also for its large ensemble. There are over 70 characters in the production; each actor is tasked with playing anywhere from six to eight parts.

Matt Grimaldi ’21, for one, has long been acting in student theater, but this is his first time acting in a Theater Department production. He found a new challenge in the long rehearsal hours and the task of playing several characters within the same production.

“It becomes a lot harder to extricate yourself from the characters that you’re playing when you spend so much time with them,” Grimaldi said. “I feel like I’m a lot more conscious of the choices I’m making on stage because it feels way more natural to be doing it. I’ve had the time to inhabit them.”

Inhabiting the characters has not happened without challenges. Because “The Laramie Project” uses the words of real people from Laramie, the cast and Eddie did table work for weeks, working with the text to discuss the production’s major themes, moments, characters, history, and more.

Pablo Wickham ’21, who has acted in Second Stage and Second Shades productions before, found that the table work was one of the most valuable elements of the Theater Department’s production process.

“I don’t usually enjoy table work,” Wickham said. “I like to get things up on their feet as soon as possible. But doing table work allows you to see how the show progresses…. At first, I was like, ‘Why isn’t this called ‘A Matthew Shepard Story?’ But then, by doing table work, I understood that this thing all started because of Matthew Shepard, but this play isn’t about Matthew Shepard—it’s about the town and how the town was affected by the crime that was committed there…. The table work really made me see that these people [writing the show] were very intentional in everything they did. In the moments they selected, how they ordered the moments in the play, and the different characters they chose to use from all the interviews they conducted in Laramie.”

The table work was especially useful in understanding the characters in the context of the piece’s documentary form.

“This show, as [Eddie] would put it, is sort of mythical,” Wickham said. “When we were able to flesh it out and make it more realistic, we were able to understand that these were real people, that this is a real place. There are some scary things about it, but there are some good things…. You read the lines differently, because once you know the underlying meaning you’re like, ‘That’s what that person was trying to say! That’s coded!’ And it gave more depth to the characters.”

Playing multiple characters, and figuring out how to make each one distinct—whether it’s in accent, style, poise, posture—has been an exciting task for the cast.

“[Playing multiple characters] has been such an amazing exercise in character development,” Annabel Asher ’22, another cast member, wrote in an email to The Argus. “Having to vary each character through voice, intentions, and physicality has taught me so much as an actor. Even the smallest changes make the most massive differences. Especially with the accent work we’ve done, I am undoubtedly going to carry the skills I’ve learned from this production into my future career.”

While the task has pushed the actor’s abilities, it’s also proven a serious challenge, one the cast has taken in stride.

“I play seven different characters,” Wickham said. “Some have only one line. Others have so much to say! And that was a challenge, and I love it…. I’m still navigating with how to remove ‘Pablo’ from all of them so they stand on their own. But we spoke to one of the original writers, Leigh Fondakowski, and she was like, ‘You never really truly become any of the characters.’ That was comforting to hear…. You can’t flesh out every single character. They all don’t have the perfect arc that you see in usual stories and plays. And so it’s kind of hard to know a lot about them, and that was a real struggle for me. But after realizing that that was never the intention, it made it easier for me. I still chose to make them distinct. They’re real human beings, and you want to do them justice with the words that they said and the humanity.”

Nathan Pugh ’21, the production’s dramaturg, focused in on how this humanity connected with the reality and history in the production, not only in the text, but also in past performance.

“There was a lot of focus on attempting to figure out the ‘facts’ or ‘truth’ about The Laramie Project,” Pugh wrote in an email to The Argus. “As a dramaturg, you can look at the theatrical world within the show, but also how this show has travelled and been performed since its first performance. But with this show, which is about the process of its creation just as much as it is about the interviews, there was a lot of attention paid to both the theatrical and historical working together.”

Pugh has worked alongside Torres and Assistant Professor of Theater Katie Pearl in his dramaturgical process. While Pugh chose to dramaturg because of his interest in research and writing, as a theater major in the LGBTQ community, he also believed it was important to bring representation to the team.

“I think I felt a responsibility to represent the LGBTQ community within the production team, to be a resource or someone to talk to about how homophobia and religious shame can influence an LGBTQ teenager in conservative America, because I have been one,” Pugh wrote. “When I read ‘The Laramie Project’ I feel a sense of recognition: this is the world that I inherited growing up, these were some of the exact words people would say to me in my childhood and adolescence.”

Wickham, who also grew up around intolerance toward the LGBTQ community, noted how working on “The Laramie Project” has been a productive way to combat the homophobia his community is known for.

“I’m from Jamaica, which is a very homophobic country,” Wickham said. “There were things for me, especially from a religious standpoint, that resonated with me because I grew up hearing that. Wesleyan needs to recognize that not everyone grew up in a very tolerant society. Some of us still have these ways and cultures where that’s what we were taught. The Laramie Project was an un-learning process for me, an unlearning of those tropes that I grew up learning.”

Because of the intense homophobic violence discussed in “The Laramie Project,” many students within and outside of the Theater Department have expressed their concerns about being re-traumatized by working on or seeing the production. Because the production is sponsored by the Wesleyan’s Theater Department, many students must fulfill major requirements by contributing to it, or may be required to see it for their Theater or related courses.

In hopes of creating an open dialogue about the project, Pugh organized a open discussion titled, “Talking Out the Laramie Project — Centering Queer Voices.” Earlier this month, Fondakowski, one of the original writers,  joined a group of LGBTQ professors and students for the event.

“I’ve always appreciated discussions I’ve had with friends about a performance,” Pugh wrote. “These are sometimes facilitated in post-show talkbacks, but I think there are limitations to that style: You’re asking audiences to stay behind after a show, and process their feelings right after they’ve witnessed something very powerful…. Prof. Pearl and I talked and thought having some kind of forum / collective discussion as a frame before the show would be the most effective way to guide a conversation…. We wanted to make sure that the LGBTQ community on campus had a space to talk about the show.”

At the event, many students reiterated their concerns about Wesleyan’s choice to put on “The Laramie Project.” Students did not only worry about the potential re-traumatization the production may cause, but expressed frustration about the production choice—why “The Laramie Project”? Why now? Why perform a show that’s been performed so many times before instead of something else?

“We’re now in the wake of thousands of performances of ‘Laramie’ being put up, relatively amaturely, at high schools,” Grimaldi said. “Largely because it’s a large ensemble cast, and it’s got that nice left tilt but it’s not too out there. It’s honestly, at this point, a really safe show [for high schools]. But it’s at the point where it’s message is getting diluted. But if we don’t continue to put up the story in a professional context it’ll become diluted until it’s worthless.”

While Pugh had originally had similar sentiments as many other LGBTQ students about the production, through his dramaturgy, Pugh came to understand critical connections between the production and Wesleyan, especially as the Theater Department deals with student backlash.

“I think my initial reaction to ‘The Laramie Project’ being staged now, like a lot of students, was dismissive: hadn’t we done this already?” Pugh wrote. “Hasn’t almost every theater major read this show at least once? Aren’t we past this, culturally? But that kind of distancing is exactly what the members of Laramie, Wyoming, did when Matthew Shepard was murdered: they thought this it wasn’t representative of who they are, when their town did produce that kind of violence. I think about Heather Heyer being killed in Charlottesville in 2017, a few weeks before I went to college and just two hours away from my hometown. My parents insisted me that, ‘This isn’t our community.’ But isn’t it? Didn’t this happen on our land? Weren’t we a part of it?”

Grimaldi also stressed the show’s relevance, particularly as a reminder for the theater community, the Wesleyan community at large, and even American society that these communities aren’t as progressive as we think they might be.

“I think that we can say, in general, that we’re more accepting of queer identities,” Grimaldi said. “We probably are when it comes to sexuality. But are we accepting trans voices? Underrepresented genders and sexualities in general? Queer voices? We’re accepting of a certain kind, but how do we, as a community, continue to talk about that? It’s true that Laramie isn’t the best show for that. But it is a show for that.”