Amherst? More Like Amworst: Men’s Rugby Takes on the Mammoths 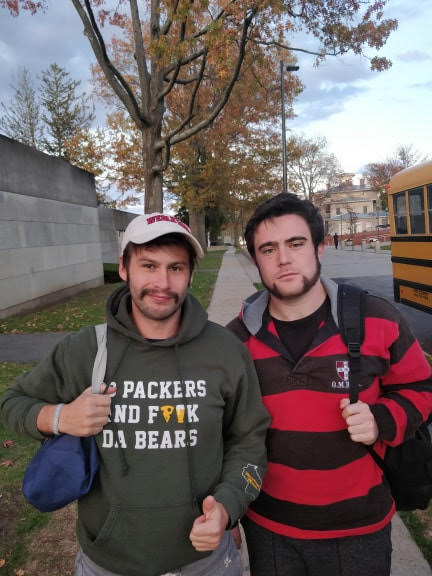 Note: Bryce Hunt ’22 and Terra Ganey ’21 are both members of Wesleyan rugby teams.

On the 30th of September, 1938, Prime Minister Neville Chamberlain returned to Great Britain with the declaration of “Peace for our time” and was deemed a national hero for his actions. If this declared era of peace had not already ended, it certainly has now; Wesleyan men’s rugby descended from the dull, dandelion-colored school bus at Amherst with fire in their hearts, ready to make war. In front of a mighty crowd of five strong, the men took the field for their first playoff match since records have been kept, with but a single substitute against a truly mammoth Amherst side.

The referee, clad in an offensive shade of pink, commenced the proceedings and the opening kick drifted into the hands of Henrick Koo ’23. A big first hit set the tone, though an initial bout of possession unfortunately saw the Cardinals slowly being pushed back towards their own line. A questionable turnover resulted in an early first try by Amherst in the corner, and their confidence turned to blatant arrogance despite a missed conversion kick. (Editor’s note: The writers are on the rugby team.) Five points down in just as many minutes, the United Old Methodist side rose up in a manner that would make Captain Marx proud.

Soon afterwards, a good run from Forrest Walker ’22 was cut short by a bone-crunching challenge and a noticeable wince from the crowd, after which Amherst proceeded to lay siege to the Cardinals’ try line. Though Phil “Lip” Kaelbling ’22 and Tucker “Das Berger” Kirchberger ’22 defended the Wesleyan posts valiantly, possession remained firmly in Amherst’s purple hands.

Ensuing sequences of play were stuck in firm deadlock—occasionally interrupted by good clearing kicks by Koo and Jack Pironti ’22—before martyr Michael Freiburger ’21 charged his way into two opposition forwards, carrying them several yards and was only stopped after a breif encounter with a third Amherstian’s left ankle. The lone substitute Henry Reade ’22 was called to action as a replacement. Reade served as a buffalo to wildly patrol the wing as Wesleyan’s depth grew thin. Fearless in the face of incredibly violent adversity, Tyler Burdick ’22 managed to make more hits than Beyoncé before a tragic three-point conversion from a penalty saw the Amherst lead extend. The clouds grew overcast as the powers-that-be showed their dismay for the scoreline, but the half-time whistle ended an inevitable retaliation from the men in red.

Calls of “See ya soon” drew some smiles all around, and an encouraging team talk from captains Walker and Nathanael Mathieu ’20 roused the Wesleyan warriors for what would be a strong second half. A few breaks down the line were stopped by admirable effort and impressive reads from Nick “Don’t Call Me Nick ‘Matt Damon’ Bowman” Bowman ’23, but a few lost scrums led to the concession of another try early in the second half. A subsequent altered strategic approach had little impact as, despite Wesleyan’s best efforts, possessions were still few and far between.

Nonetheless, Griffin Dorman ’23 led by example with stellar tackles and good breaks, proving him beyond a doubt to be more dangerous than climate change. Xavier Cardoza ’23 and Jake Meyer ’20 were also consistently key members around the breakdown, putting in the tireless work that ultimately allowed for several promising runs by Jack “MVP” McEvoy ’22.

Disaster struck when Elan Isaacson ’23 was taken off the pitch following an incident he doesn’t remember; with no substitutes remaining, he was sorely missed. Thankfully, numbers quickly evened out after an opposing winger was presented with a golden ticket to the sin bin for a high tackle on substitute powerhouse Reade ’22, indicative of the unsportsmanlike Amherst behavior. (Editor’s note: The writers are on the rugby team.) The Amherst aggression continued with another high tackle on Koo and a second Amherst yellow card. Nonetheless, probing kicks from our back line allowed for consistent gains in territory as Old Methodist started to look more like their old playoff selves. Lucas Mani ’19, straight off the back of a Halloweekend Wolverine display, drove his mutton chops deep into the Amherst side.

As the match progressed, line breaks began to favor the purple Mammoths. Though trash talk ran rampant, Wesleyan maintained their unyielding commitment to the Cardinal rugby rule of three Rs: Respect, Responsibility, and Fun. To my dismay, the Old Methodist side again had their clear comeback momentum thwarted by the whistle of the referee (who we suspect was on tenure). (Editor’s note: The writers are on the rugby team.)

Though the scorekeeper sustained a few hits to the head, the final result was estimated to be approximately 32–0 in favor of the opposition. Hands were respectfully shaken as players gathered to recount the numerous instances of unsportsmanlike Amherst play, but also to congratulate each other on what has been an extremely successful season. Despite losing one of our captains to the gentle embrace of Italian rugby, Mathieu has led the team to unprecedented levels, with two notable victories over Trinity contributing to our spot in the playoffs.

In light of such a promising first semester, a special mention must also go to all players in the freshman class of ’23 for their continued dedication and passion, a cohort we expect will do proud the Old Methodist banner for years to come.

Bryce Hunt can be reached at bhunt@wesleyan.edu.

Terra Ganey can be reached at tganey@wesleyan.edu.