“Deerman”: Not the Hero Wesleyan Deserves, but the One We Need Right Now 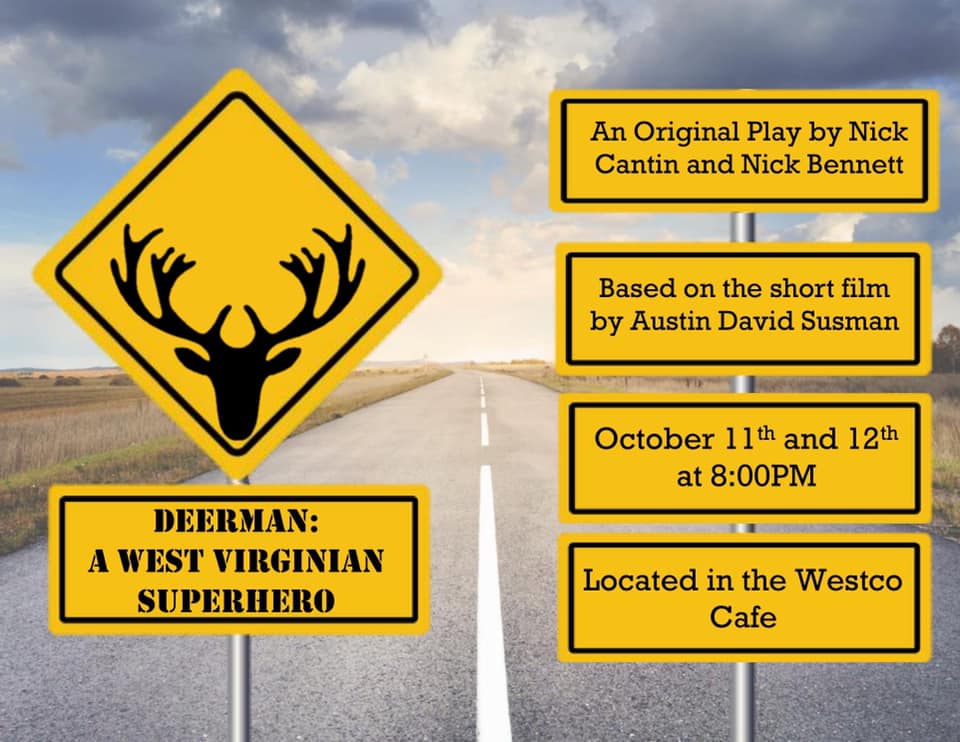 Upon entering the basement of WestCo this past weekend, audience members were immediately greeted by a gentle serenade of banjos and generic country music, which set the scene for this West Virginian comedy. Written by Nick Cantin ’21 and Nick Bennett ’21, “Deerman: A West Virginian Superhero” tells the story of Spruce Wade (Ryan Natcharian ’23), a guidance counselor whose parents were killed in a tragic accident: hitting a deer on their way home from the opera.

In a somewhat questionable attempt to keep both highway drivers and deer safe, Wade transforms into the legendary Deerman who roams the night doing…no one is really sure what, but it somehow keeps the deer safe and the plot moving. However, this not-so-gallant superhero must face off against Terrence Shiftlifer, a car salesman determined to bring down Deerman since car-on-deer accidents fund his business. Spruce’s adrenaline-fueled adventures include facing evil corporations intent on killing West Virginia’s deer population, being held at gunpoint in the woods, and his own childhood trauma including his extremely bizarre love-hate relationship with deer. Along the way he gets help from his boss Emma Rua (Jenna Lacey ’21) and a teenager named Danny (Sam Ackiron ’23), both of whom seem grossly unqualified to fight crime and might lead viewers to question whether Spruce might need to define his own work/life boundaries.

Cantin, who also directed the performance, told The Argus that staging “Deerman” has been almost two years in the works. It all started when him and his friends saw the original “Deerman: A West Virginian Superhero” by Austin Susman, and asked him for the rights to make their own staged adaptation.

“We kept the basic outline of scenes and everything else, except a couple lines and the costume for Deerman itself, are original to [our] show,” Cantin explained.

Cantin and Bennett also added new characters, including Alfonzo, who is Spruce’s long-time friend and elderly mentor (Max O’Hare ’23). His quippy one liners and cryptically confusing CIA backstory made audience members crave an Alfonzo spin-off. Like all good superhero stories, “Deerman” has a cliché villain in Terrence Shiftlifter, also known as “Carman” (Eli Conlin ’21) whose evil laugh wouldn’t have Heath Ledger quaking in his boots, but who did have a solid villainous monologue. The quirky and distinct characters give the production an authentic yet melodramatic feel.

Throughout the show, characters frequently and hilariously broke the fourth wall with an odd yet effective mixture of dark jokes and terrible deer themed puns. Some puns were snappy, such as “buck up” while others were more of a reach, such as “vigiANTLER-y” instead of “vigilantly.” Some of the dialogue in the more serious scenes felt stilted, specifically when Deerman rejects help from Emma and Alfonzo and decides to face Carman alone. This is an objectively poor choice, and when Spruce is saved by Emma and Danny he learns that depending on your friends is important, following a fairly predictable narrative arc.

One aspect that makes “Deerman” unique is its accelerated production timeline. The time from auditions to opening night was only a month, which is incredibly impressive considering the seamless flow of the lines and transitions. Cantin credited this in part to the cast and crew members.

“The cast has been a joy to work with,” he said. “The best part of it [is] coming into rehearsal and knowing that everyone will bring their A game. We’ve upped this show a hundred times, and then today I came in and asked them to up it ten times more and they did. That’s the best part.”

“Deerman” is not a Second Stage Production, but the show actually thrives off this fact, using its lower budget production to fuel the comedy, as when as a bad guy uses a water pistol instead of an actual gun. The show is self-aware about its own corniness, and doesn’t take itself too seriously, instead leaning into the comedic elements of the plot as well as the act of performing as a whole.

Overall, “Deerman” has a homey feel, from the framed deer posters on set to the fake orchestra (the production used an audio track, but still set up chairs with instruments on them to set the scene) and its simplistic yet hysterical tone might be just what the world needs in this trying time of hyper-overproduced Marvel movies. According to Cantin, Austin Susman is rumored to be working on a “Deerman 2,” and when it’s released, Cantin and Bennett will be ready to create a sequel. If it’s anything like the original, “Deerman 2” will be a must-see.

Katarina Grealish can be contacted at kgrealish@wesleyan.edu.