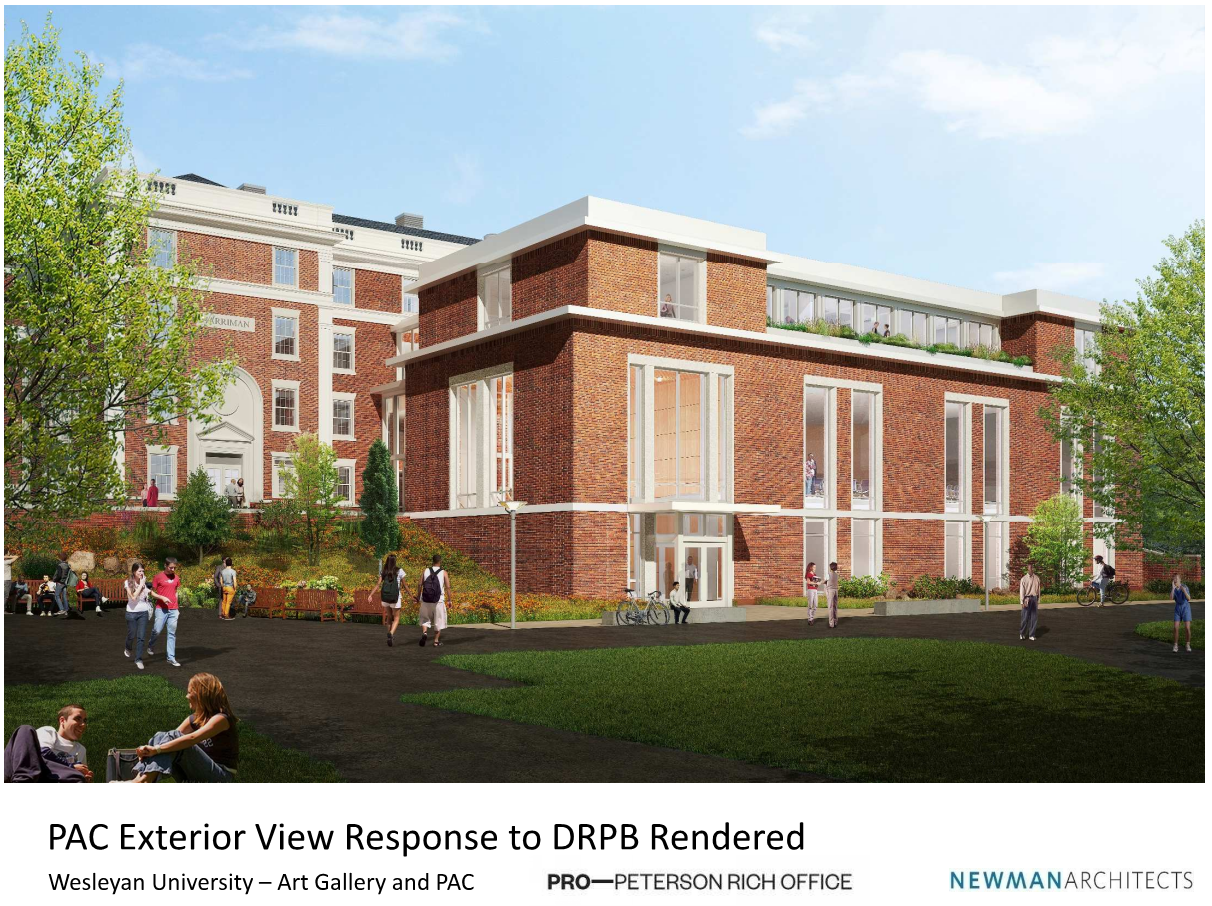 A new proposal for renovations to the Public Affairs Center (PAC) was unanimously approved by the City of Middletown Planning and Zoning Commission on Oct. 9, 2019. Representatives from Newman Architects, Langan Engineering, and Peterson Rich Office presented the proposal, fielding questions from the public and councilmembers.

Project Manager of Construction Services Mike Rosalie introduced the proposal. In 2015, a survey conducted by Sasaki Associates found that PAC was one of the most utilized and least liked buildings on campus. A subsequent building conditions assessment conducted by Newman Architects addressed a need for modernization and expansion.

In the proposal presentation, Rosalie laid out the project into two unofficial parts.

“This project is to remove a layer addition [from] 1954, create a new forum space with new larger classrooms to help support flexible learning, new lecture halls, and update the accessibility between the PAC building through the connector, which is the second part of the gallery, into our Olin Library,” Rosalie said. “The other part of the project on the west side…is to help take [our print collection] from one location on campus and move it to the center of campus so it’s more accessible to students and the public.”

Howard Hebel from Newman Architects then explained how the faculty and student usage of PAC has outgrown the building’s capacity.

“[PAC] started as an experiment, bringing together many departments that related to government, you might say,” Hebel said. “The Public Affairs Center combines Economics, History, Government, Sociology and interdepartmental special social studies group[s] so that they can cross-fertilize and become a one-stop shopping place for learning everything about governance. And that has succeeded so well that they have outgrown their facilities and of course faculty and students use space a lot differently now than they did in 1954 when the institution was first created.”

Senior Project Manager from Langan Engineering Katy Gagnon spoke next, and explained the mechanics of the site plan. One important element, as the University is committing to PAC achieving Leadership in Energy Environmental Design (LEED) Standards, is the new landscaping plan surrounding the building.

“Immediately adjacent to the building is all new landscaping,” Gagnon said. “We’re going with a sustainable pilot program for the University of low-maintenance, native, drought-tolerant grasses and shrubs and some deciduous trees.”

“One of the big things that we focused on with the fire marshal was fire access to the site,” Gagnon said. “We have widened a fire lane from Church Street through college block and allowed a maneuvering area over here to his approval.”

Principal Miriam Peterson of Rich Peterson Office delved into about the significance of the latter part of the proposal, which involves moving an existing print collection from the College of Fine Arts (CFA) to an additional glass renovation added to the west side of PAC and connecting to Olin Library.

“Currently, the collection is housed partially offsite and then exhibited in a really insufficient gallery space for the collection itself,” Peterson said. “[The Center for the Arts] is the primary location of fine arts on campus. One significant change that I think has an impact on the kind of pedagogy school—the relocation of the gallery to the main library complex—will give the collection a place of prominence within the school. It will make it more accessible to students and faculties as a learning tool. And part of the purpose of this project is also to make the collection more accessible to members of the public and invite people in to enjoy this really rare, amazing collection.”

The council then opened up the floor to a question and answer session between council members and the public. One question spoke to the energy use and efficiency of the building, and how the building fits into the University’s goal of achieving carbon neutrality by 2050.

“The building is being designed to achieve LEED certification, which it seems to be on track for,” Hebel said. “So, that involves that every component in the building be optimized for the high performance envelope, like high performance equipment, lighting, and we have sustainable landscaping…. I don’t remember exactly how much better it performs than the existing building, but it will perform fantastically better than the existing building which is not at all insulated and is single glazing and so on.”

Hebel also said that the new PAC building will beat the energy performance required by Connecticut code by about 30 percent, as it will be one of the first buildings on campus to transition from steam heat water circulation to the hot water method. He said this switch will dramatically reduce energy use, a key step in achieving carbon neutrality.

Another question spoke to the building’s accessibility, and how the renovation will address the needs of non-able-bodied people. Throughout the presentation and during the question and answer session, the group explained how the construction will make six more accessible entry points, including a better connecting passageway between PAC and Olin Library.

“The original Olin Library building…is not accessible to a non-able-bodied person,” said Miriam Peterson, a design architect for the gallery portion of the project. “So one of the major changes here [is] the current ADA accessible route into the library and the library elevator is through a parking lot to the west of Olin Library. And so the new lobby to the gallery will serve as a connector, maybe it will serve as a replacement for the existing connector, but also will be a uniform and dignified entry to the library complex for any person who might be visiting.”

With approval from the zoning board, the University will now work to finalize their designs and request bids from construction companies in the coming months.