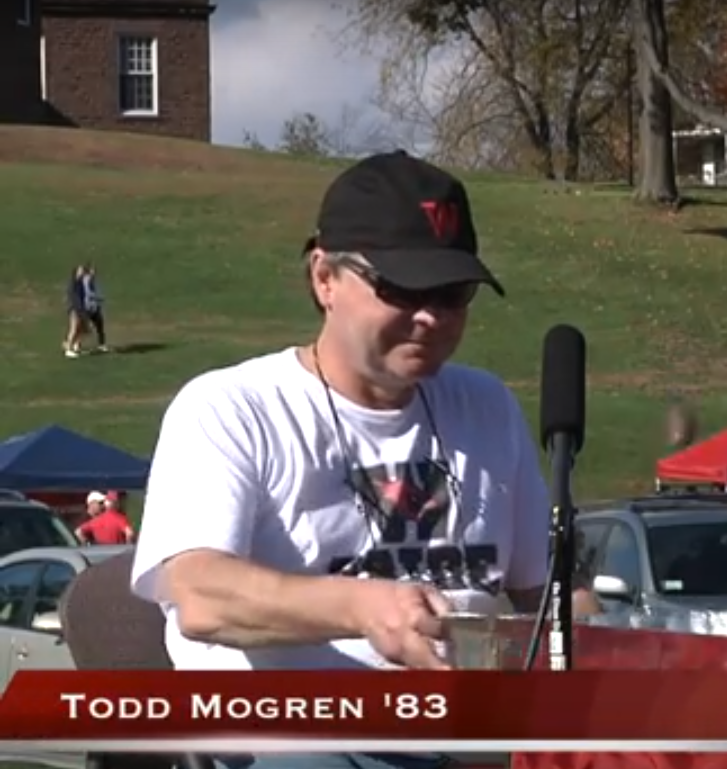 “What I learned on the field and in the classroom at Wesleyan prepared me for the journey,” Todd Mogren ’83 said, on a rainy New England morning. “I am a living example of how the Wesleyan experience prepares you for things you can’t even conceive of.”

These words were spoken on Oct. 9, 2019, by a man who was given just two weeks to live back in January of this year. Since his life was saved by a liver transplant, Mogren has founded a nonprofit called LetsSave25000, an organization dedicated to registering people as organ donors in an attempt to save lives.

Mogren still walks the earth, bringing with him an inspiring story, relevant to all Wesleyan students and graduates.

Mogren’s journey started in Millbury, Mass., where he was born. A high school quarterback and baseball player, Mogren’s physical talents eventually led him to Wesleyan, where he knew he could excel on the playing field and develop scholastically.

“When I got to Wesleyan, I was over-matched in the classroom,” Mogren said. “The place was tough academically, so I had to learn to think critically and quickly just to survive the coursework.”

With some time and work, Mogren adapted to his courses. Mogren’s newly found critical thinking skills manifested in the form of psychological advantages that proved helpful in and outside the classroom. In baseball, after he threw a pitch, he knew exactly what he wanted to throw next. This mental advantage in pitch sequencing led to incredible success; today, Mogren still has the second-most career strikeouts in Wesleyan baseball history.

What’s even more impressive is that Mogren never topped out above 82 miles per hour. It was Mogren’s ability to apply the mental skills he learned in the classroom to the ballfield that made him a great pitcher.

The same went for Mogren’s academic studies. He developed a work ethic to stay on top of his school assignments.

After graduating from the University, Mogren became a software developer, focused on data-based design. His interest in this subject also started in Middletown. In 1979, when Mogren was a first year, the coaching staff of the football team wanted to start digitizing scouting reports to find trends and tendencies in opposing teams. Mogren volunteered to help, working in the computer room, which at that time, housed a giant DEC-30 computer that required multiple fans and AC units to keep it from overheating.

Mogren went on to work on one of the first e-commerce websites, selling power tools online before Amazon even existed.

Mogren continued working in the software development world until 2016, when everything changed.

In late 2016, in a span of just 30 days, Mogren lost his job, his house, and his wife to a divorce. At the time, Mogren was a heavy drinker and nearly drank himself to death, causing his life to spiral out of control. He was diagnosed with end stage liver disease due to cirrhosis and was told that if he had one more drink, he wouldn’t wake up the next day.

Mogren described that 30-day span as experiencing the Book of Job. He termed that period of time “The Book of Todd.”

After getting his mind back, Mogren was eventually put on a transplant list. His liver still failing, Mogren needed someone else’s to survive. However, because his liver was able to keep him alive for the time being, doctors told him he wasn’t a high priority on the list.

Enter Mogren’s children, Benjamin and Jessy. Both volunteered their livers to their dad, Benjamin’s just happened to be a better match. Jessy, Mogren’s daughter, was also a match and volunteered her liver. Mogren credits her just as much in helping him throughout the process.

Mogren is living proof that the University can prepare you for just about anything. Prior to the surgery, Mogren worked to strengthen his body, readying himself for recovery.

“I treated surgery like the opening of a season,” Mogren said. “I was going to be ready. I was in the gym doing two-a-days almost every day for three months before surgery.”

On Jan. 8, 2019, both Benjamin and Mogren went under anesthesia in an attempt to save Mogren ’s life. Twenty-four hours later, Mogren awoke to find out the surgery had failed. According to doctors, Mogren had suffered a blood clot in an artery near his liver that made the secondary connection impossible.

As a result, Mogren was told he had two weeks to live.

“But my Wesleyan experience played into it,” Mogren said. “The adversity you face on the field: How to compete, how to prepare, and the skill of thinking critically quickly, which I learned in the classroom, led to the decision that the last two weeks would not be a pity party. Every person that came in the room, I was gonna make them smile or laugh. From the janitor to the nurse, I wasn’t going out without a smile and making others smile as well.”

Although he prepared physically, it’s hard to imagine what goes through the mind when you are genuinely facing death. Mogren’s liver started to fail, and his time on Earth was about over.

But then something happened.

On the 10th day of the 14 Mogren was given to live, the doctor walked into his hospital room and told Mogren they found a liver that could save his life. A Connecticut man in his early 20s had just tragically passed away, and he had been a registered organ donor. His liver was a match.

Mogren went under anesthesia again, this time for 20 hours. When he woke up, he had a new liver.

The next day, Mogren was on his feet, walking around. Six days later, he was discharged from the hospital, which Mogren believes is a hospital record for quickest liver surgery-to-discharge time.

Wesleyan Athletic Director Mike Whalen ’83, a friend of Mogren’s, visited him in the hospital, urging him to take the recovery process slowly despite Mogren’s stubbornness.

“I mean, it’s a competition, right?,” said Mogren with a laugh.

Mogren has since recovered from surgery and is still going to the gym regularly and getting blood work done every two weeks. Mogren attends almost every Wesleyan football game, arriving well before kickoff.

But his life has taken on new direction.

Mogren started a nonprofit called LetsSave25000, the purpose of which is to register as many people as organ donors as possible. The nonprofit’s message, written by Mogren, is compelling.

“Registering to be an organ donor is one of the coolest ways to enhance your own Life Legacy by providing life for up to eight people and offering a glimmer of light to those we leave behind,” reads the message. “We do not know for sure what awaits us when we pass, but we do know that those that love us will miss us and extending life to others is a very special way to offer them a candlelight of hope.”

With the help of the Wesleyan Baseball team, Mogren and the team will hold a donor registration drive at Wesleyan from 2 to 6 p.m. next to the concession stand before this Saturday’s football game against Tufts.

Once Mogren fully recovers from surgery next January, he plans to travel the country, setting up pop-up organ donor registration tables at various venues like Wal-Mart and Home Depot. He plans on documenting his new journey through the nonprofit’s Facebook and Instagram accounts. He wants people to share stories of donors they know or recipients of organ donations and the impact these experiences have had on families.

“They are the real heroes: the donors,” Mogren said. “And the recipients are proof that part of that person, that hero still walks the Earth.”

Mogren will forever credit the University for teaching him much more than just classroom knowledge.

“The total experience [of attending Wesleyan] prepares you,” Mogren said. “Not just for a job. For everything…. The type of students Wesleyan attracts, they remain friends forever. When I was in the hospital, hundreds of people I met at Wesleyan reached out to me. The caliber, the quality of people you meet are extraordinary. The people you meet at Wesleyan are the people who are going to have the biggest impact on your life.”

“We encourage everyone at Wes to stop by, register if you have not already, share your donor story or just say hello. Wesleyan is quite simply a unique place.”