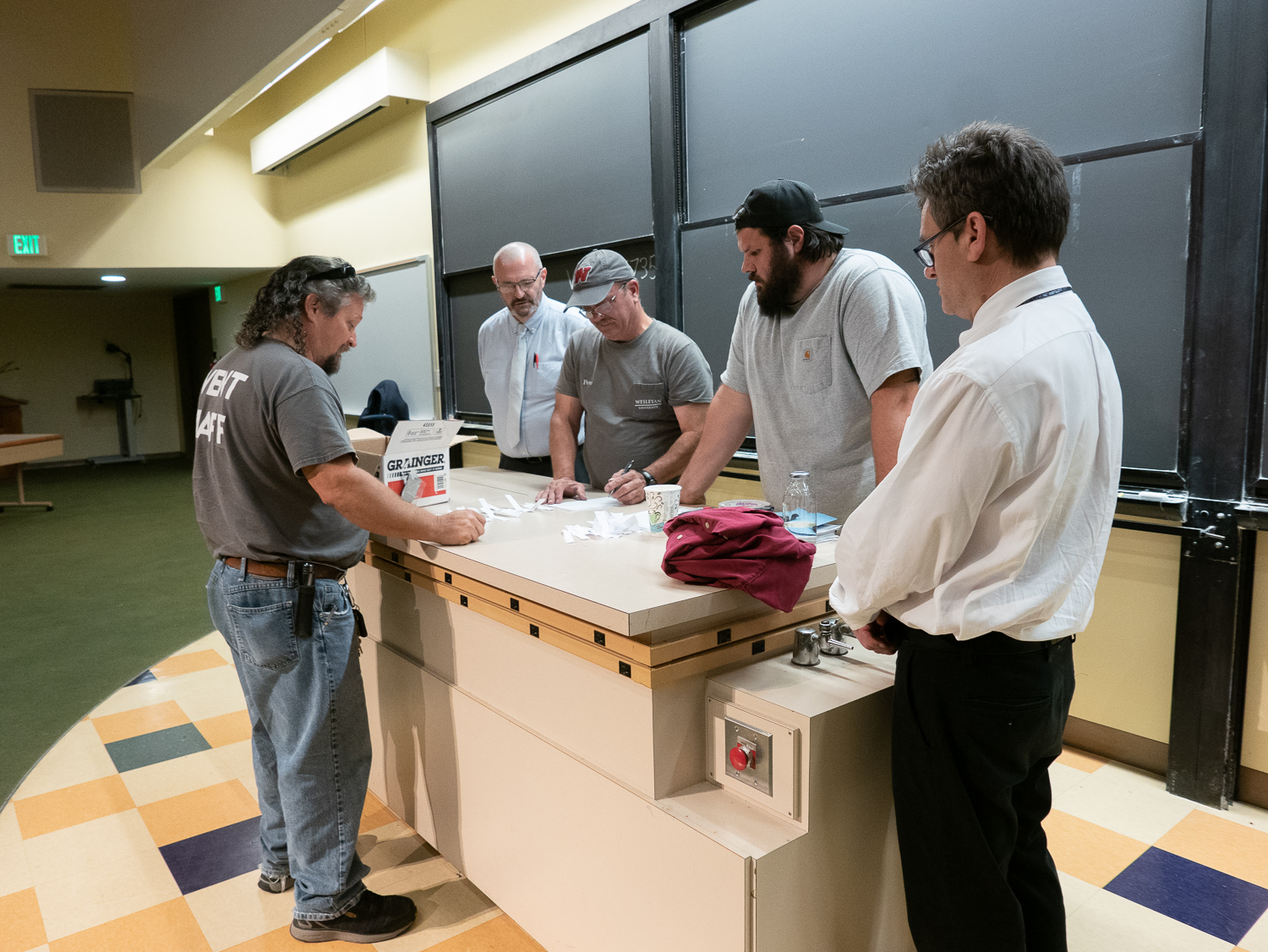 Physical Plant union members voted to accept the latest version of their three-year contract, 21 to 11. Members of Physical Plant’s union and union representative Seth Goldstein gathered to vote on Tuesday, Oct. 1, and a group of students wearing shirts with the union’s logo came to support the workers.

Union members unanimously rejected the last proposed contract in September. The stewards of Physical Plant’s union—Local 153 Office & Professional Employees International Union (OPEIU)—have been in negotiations with representatives of the University administration for several months, since before Physical Plant’s contract expired on July 1. A key point of contention was health insurance costs, which will raise at an unpredictable rate in the years to come.

“This is the first time that we’ve ever had control over the increases in health care, which are offset, also, by the $1500 signing bonus,” Goldstein said at the meeting.

The first version of the contract offered Physical Plant workers a three percent raise per year and a health insurance cap of 4-10-10 percent for each year. Workers would also receive an additional $500 per year to offset the unpredictability of the health insurance costs. But union members unanimously rejected it due to concerns that near; 10 percent insurance increases would cancel out annual raises.

Union steward and HVAC/Utility Mechanic Pete McGurgan spoke about the complications in the final days of the negotiations, given that different members have varying priorities. As negotiations went back and forth, Physical Plant negotiators said that they worked to keep the interests of all of their members in mind.

The final discussion around the contract was contentious. One member raised concerns that co-pays and deductibles could go up while monthly rates stayed the same.

“I remember marching around [President Michael] Roth [78]’s North College with signs,” McGurgan said to the room, referring to negotiations from past years that resulted in Physical Plant employees demonstrating over the proposed contract. “We don’t have those arguments. We don’t have something we can take out to a newspaper and get any sympathy. I’m telling you, you show this to someone outside of here. They’re going to go, ‘What are you pissed off about?’”

“We are pleased to have reached an agreement with the Physical Plant union, and are now working to update the contract with the new provisions,” Brommer wrote. “We worked with the union to address their primary concerns about health care, retirement funding, and job security, and we look forward to continuing to support our employees.”

One student, who attended in support of the workers, was invited to speak to the room.

“No matter how you all vote on this contract, we want to emphasize that we support your decision and that the fight for labor on this contract isn’t going to end here,” Nathan Witkin ’20 said. “We, as students, are committed to working with all of you and to forming bonds with all the workers on this campus…to ensure that the administration recognizes that our community is not just tuition-paying students and tenured professors. It’s everybody who makes this university not just healthy and safe, but makes it function in the first place.”

After the vote was announced, many of the members applauded and dispersed. Several expressed relief that negotiations were over and that they had what they saw as a fair contract.

“I’m just happy it passed, realistically,” union steward and Material Handler Kris Patterson said. “Going back to the drawing board with them, we’re not going to do anything but start losing stuff…. If you’ve got a hot hand when you’re playing poker or roulette or something like that and you’re on a roll, you’ve got to know when to walk away from it or you’ll lose it all. And that’s what this was. We were moving in the right direction, we kept pushing, kept pushing, and we started making headway with it, and we got to the point where we are right now.”

“In the end, Wesleyan’s our employer, we’ve got to keep a good rapport with this employer, but we want something that’s fair,” added union steward and Journeyman Electrician Phil Huntington. “And I think we walked away from it where they’re happy, we’re happy.”