“God’s Ear” Is a Fragmented Exploration of Tension and Grief 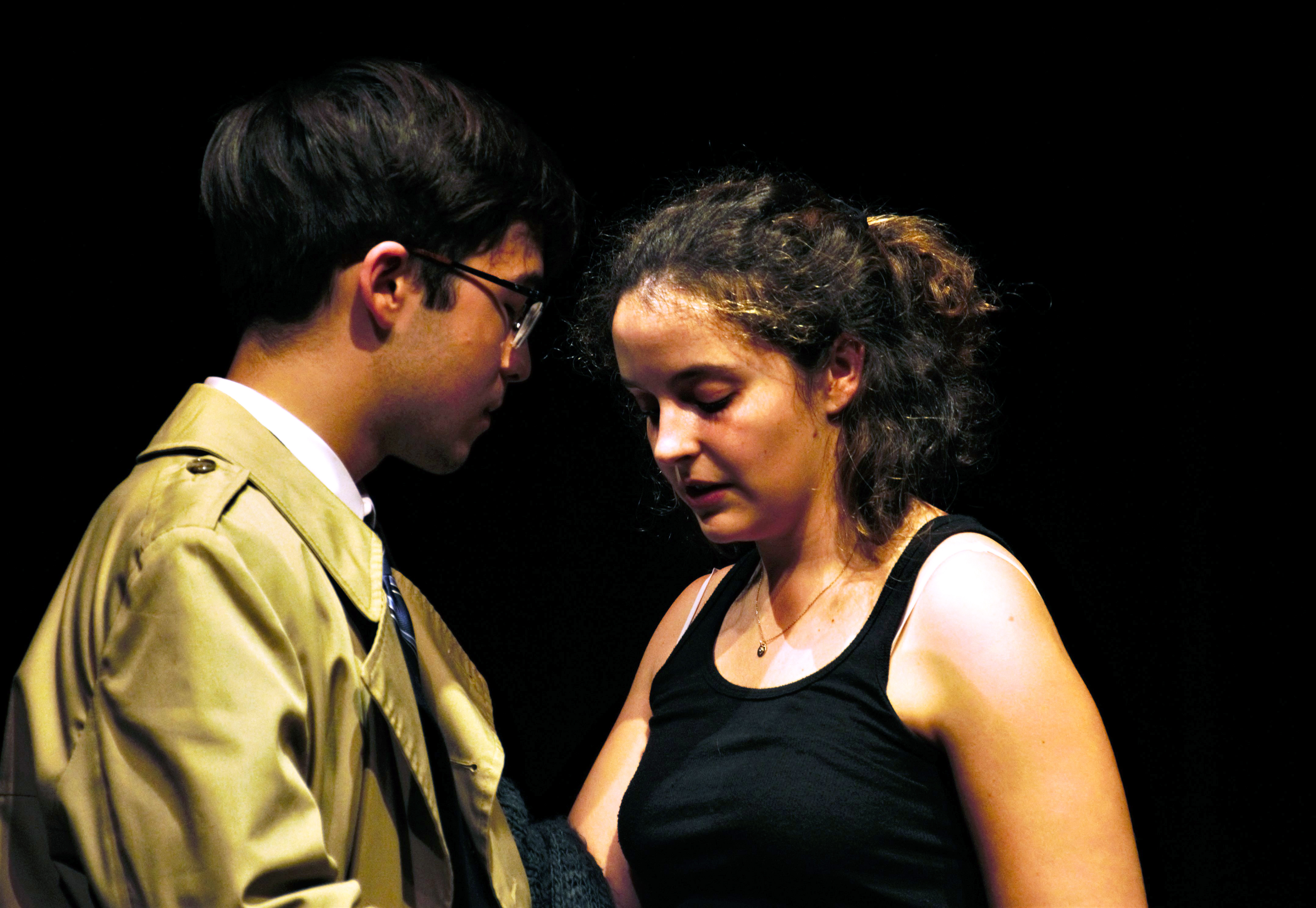 A quick Google search in preparation for this weekend’s student production of “God’s Ear”—which opened yesterday in the ’92 Theater—afforded me the expectation that the show would be another coming-of-age story so easily identifiable to the 21st century eye. Within minutes of the start of the show, this misconception was powerfully dispelled.

“God’s Ear” follows a family as they grieve the loss of their son. Ted, the father (Jake Neuffer ’23), finds himself in and out of affairs as his wife Mel (Maisie Hurwitz ’22), struggles at home with their daughter Lanie (Robyn Wong ’23). As Ted is being shown having an affair or jetting off to his numerous business meetings, Mel is always present on stage with him, often standing in the opposite corner in tableau or watchful with a disapproving eye. Likewise, as Mel plays at home with Lanie, Ted is silently cast to the opposite side of the stage, at times effectively removed from the relationship. The stage direction, which frequently includes walking in circles or yelling across the stage, enables the actors to command the attention of the audience with their bodies alone; the University’s production uses minimal props and stage setup, only a bed and a corner of the stage with pillows and action figures.

In sharp contrast to the minimalist setup of the stage is the production’s use of lighting and sound. The brightening and changing of the lights at times seems random, forcing the audience to shed their learned conceptions of the ways in which lighting is traditionally used to transition between scenes or important moments. At one point in the show, an overpowering blue light shines onto the audience, seemingly coercing the audience into sadness in a moment in which sadness is not necessarily fitting to the story line.

Similarly the use of music, at times hypnotic, at other times light and Disney-like, doesn’t always seem to fit the scene. This apparent randomness is fitting given that much of the show works towards chipping away notions of significance in everyday life, exemplified in one scene in which Ted asks which sister Mel is talking about, to which she responds, “This one, there.” In this way, the audience finds the scene relatable in its appeal to general family connections, subsequently forcing thoughts about the meaning and depth of these connections.

In this same vein, much of the dialogue is tangled up in cliches. Many monologues begin with coherent speech but, as they go on, begin to devolve into repetitive phrases only related to each other through cliche or rhyme. For example in one long breath, Mel lists unconnected phrases—“work it out, mend the fence, wait it out, paint the town”—as if speaking in normal conversation. The audience is compelled into an illusion of understanding, when truly these sentences have no inherent meaning. These cliches also force the audience into the same frustrating confusion experienced by the characters on stage—the audience struggles to understand the chaotic dialogue of the characters in the same way that the characters themselves struggle to rationalize their own chaotic situations. 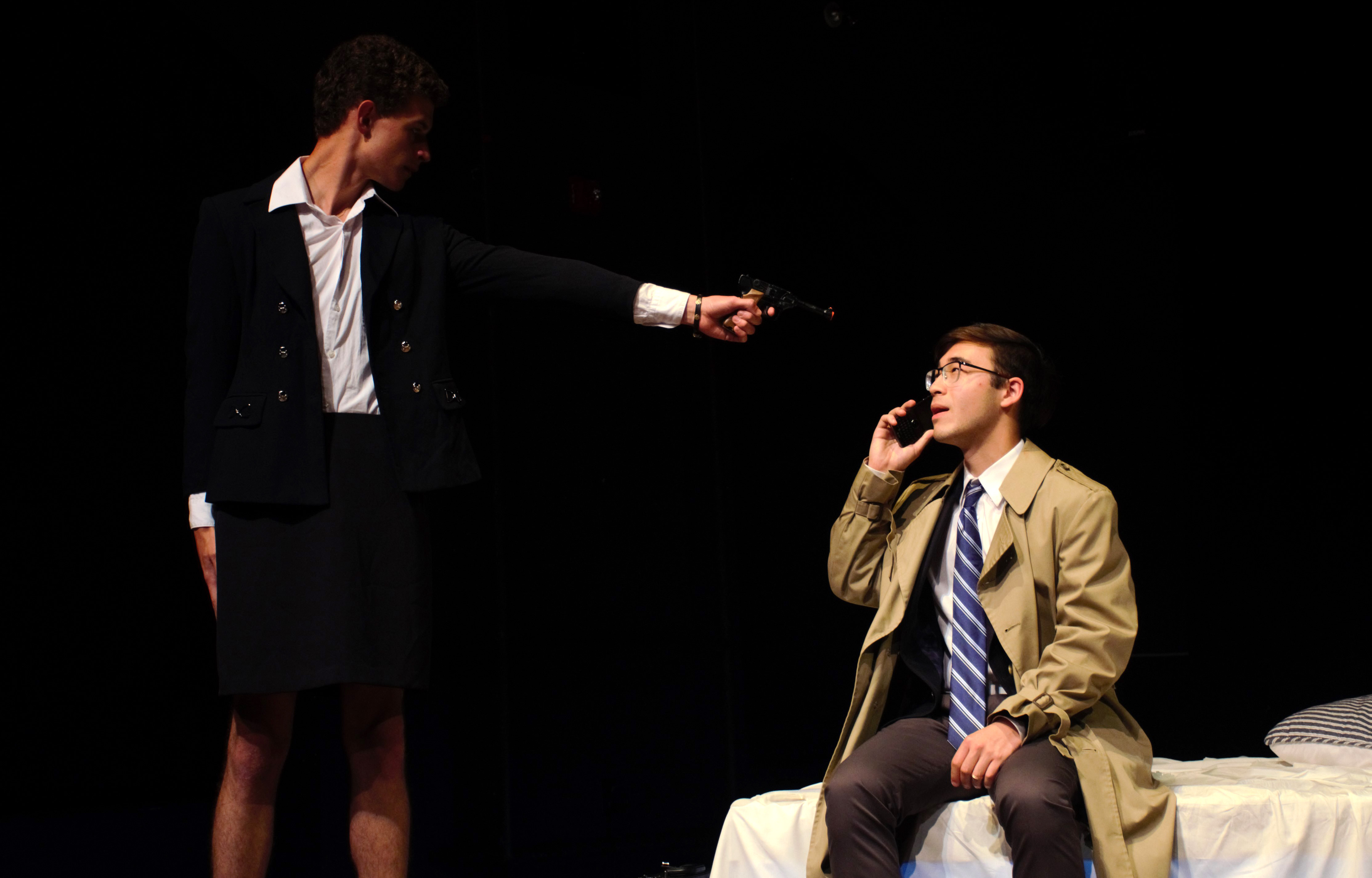 The conversations between Mel and Ted are frequently fast-paced, tennis match–like exchanges riddled in these cliches, sending the audience into confusion, attempting to make sense of the garbled language. When the language becomes simpler, sometimes devolving into the all-too-familiar frat bro lingo (“Your wife doesn’t know dick about dick”), the audience attains a sense of involvement and of being accepted into the scenes of the play themselves, finally able to understand the mixed-up words that at one point were incomprehensible…. Until the garble starts up again and the audience is once again reminded of their distance from the storyline. Even when the dense dialogue distances the audience from the characters, however, a lingering sense of personal involvement in the show remains, as does an understanding of the grief and tension presented onstage.

“God’s Ear” isn’t all grief and mourning though, and it provides the audience ample comic relief delivered mostly by the young Lanie. Lanie embodies all of the silliness and curiosity that comes with being a young child. She proudly declares to her mother that when she grows up, she wants to be Hellen Keller. She also, splendidly, asks the audience, “Did you know that the Earth is a magnet?” and, “One year for me is seven years for Snoopy.” Comic relief also comes in the form of characters like the Tooth Fairy in her almost child-like dress and an animate human action figure that comes back after being buried in the backyard.

Ultimately, the line that stuck with me after the show ended is Mel’s declaration that “there’s nothing to get.” Throughout “God’s Ear,” the audience is artfully and slyly reminded of the emptiness that lurks beneath everyday words and exchanges.