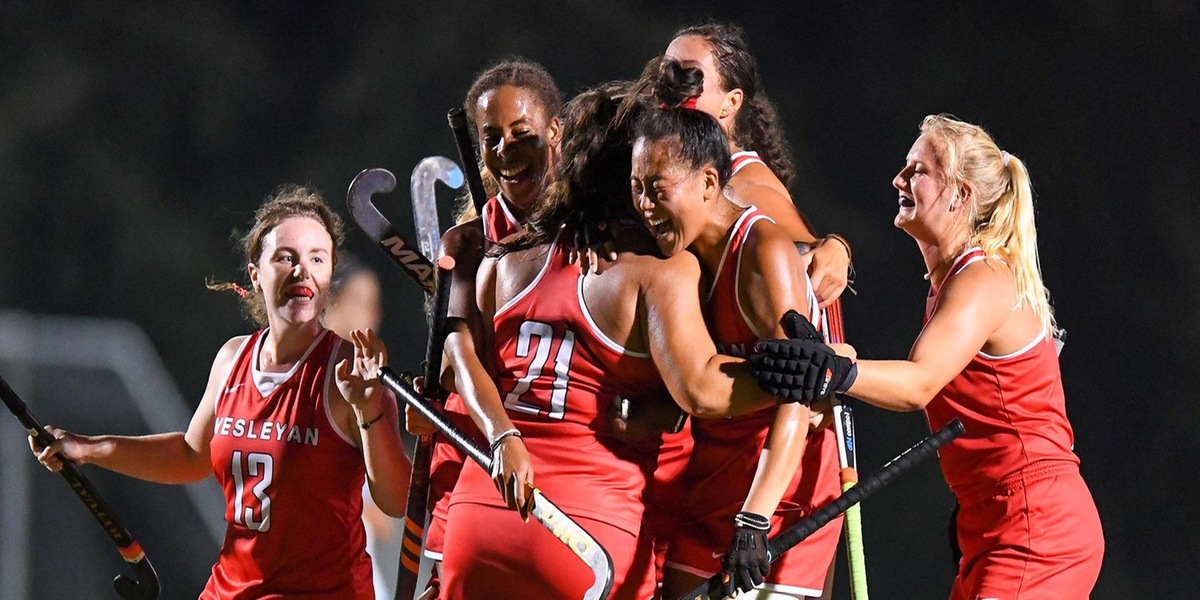 It was an ordinary humid Tuesday night for most of Wesleyan’s campus—except for on Smith Field, where things were heating up for Wesleyan’s field hockey team. The evening matchup against conference foe Tufts left Wesleyan with their first NESCAC victory.

Before the face-off, Wesleyan had fallen to conference competitors Middlebury, Williams, Bowdoin, and Colby. While their 2019 4–4 overall record had already looked more promising than their 2018 4–11 final record, the team was hungry for more victories, especially against a formidable opponent like the No. 5 ranked Jumbos.

“The team has improved tremendously since the start of preseason,” head coach Christine Kemp wrote in an email to The Argus. “I am highly motivated by their eagerness to learn and continue improving throughout the entire season. They want to constantly get better and find success.”

And find success they did, despite all precedent.

Though the Cardinals proved their fortitude and determination on the field that night, many wouldn’t have bet on the Birds to dominate the competition. No member of the team had ever won against Tufts. Wesleyan hadn’t bested the Jumbos since 2015, when they edged them out in a close 3–2 battle. For the last three years, the Red and Black had let up 17 goals to a vicious Tufts offense, while only sinking one shot for their own side.

History seemed to dictate the beginning of the matchup, as Tufts absolutely dominated the first period of the game, notching six shots and three penalty corners. Yet the Wesleyan defense came prepared. Senior goalie Delaney Wood made five saves in the first ten minutes. Five seconds after Wood’s fifth save of the period, Olivia Baglieri ’22 covered goal to make a defensive save, her fifth of the season.

The second period started off with another shot from Tufts, but Baglieri was back in action—this time on the offensive side—and took a shot at 19:03. Tufts retaliated quickly and steadily through the rest of the period, with eight more shots on goal before halftime.

The second half seemed to follow the pattern of the first, with a strong Tufts attack continually testing the Wesleyan defensive effort. Despite the constant attacks on goal, Wesleyan persevered to block out Tufts’ shots and keep the score at 0–0.

Tufts attempted to score not twice, or thrice, but four times in the third before Baglieri retaliated with her own shot on goal. It took two green cards and two more shots from Tufts before Wesleyan struck again, this time from first-year Diana Schwarz.

Just seven seconds after Schwarz shot her shot, Baglieri stepped up for a penalty stroke. She confidently surpassed Tufts goalie Allie Stallman, bringing the Birds to a 1–0 lead.

In hindsight, the goal would seal Tufts’ fate as the losers of the match. Yet their offensive effort tried everything in its power to avoid defeat, attempting to avenge Baglieri’s goal with a whopping 10 shots throughout the rest of the game. In the final moments, Schwarz retaliated with two shots of her own—one saved by Stallman and one wide—but the Cardinals remained in the lead by just singular tally.

The final score did not reflect Tufts’ offensive effort, which heavily outshot Wesleyan in the matchup—31 to six—and took 18 penalty corners to Wesleyan’s three. Wood combatted the Jumbo offense with an impressive, yet not unprecedented, 17 saves in goal. Before the Tufts matchup, Wood was ranked 21st in DIII for saves and 46th for save percentage, averaging 8.71 saves per game and a .792 save percentage. After the matchup, she is now ranked 14th in DIII for saves and has an improved .830 save percentage.

The 1–0 victory brings the Red and Black to 5–4 overall, and 1–3 in the NESCAC. Their first conference win moves them up to ninth in the ’CAC, followed by Conn. College and Trinity, respectively. Neither the Camels nor the Bantams have garnered a NESCAC victory thus far.

Tufts, formerly undefeated in the conference after matchups with Williams, Colby, and Bates, now sits at fifth in the ’CAC at 3–1.

“Defeating Tufts, the number five team in the nation, a program that has been to the national championship game two out of the last three years, was a defining moment for our team,” Kemp said. “It shows that we can truly compete with the best in the NESCAC and that all of their hard work is paying off.”

The NESCAC victory is not only a win for the team in the conference, but also for the Division III playing field at large. The ’CAC is one of the most competitive field hockey conferences across the nation; 7 of 11 NESCAC teams were ranked top 20 in preseason DIII rankings.

After their first glimpse on NESCAC success on Tuesday, the Cardinals look to more conference victories in their remaining matchups, which are all against ’CAC competitors.

“I look forward to seeing how far the girls individually and collectively can go this season,” Kemp said. “It will be really fun to look back to that first week of practice in August compared to our last week of the season and be able to feel such a sense of accomplishment for how much we have grown in a short time.”