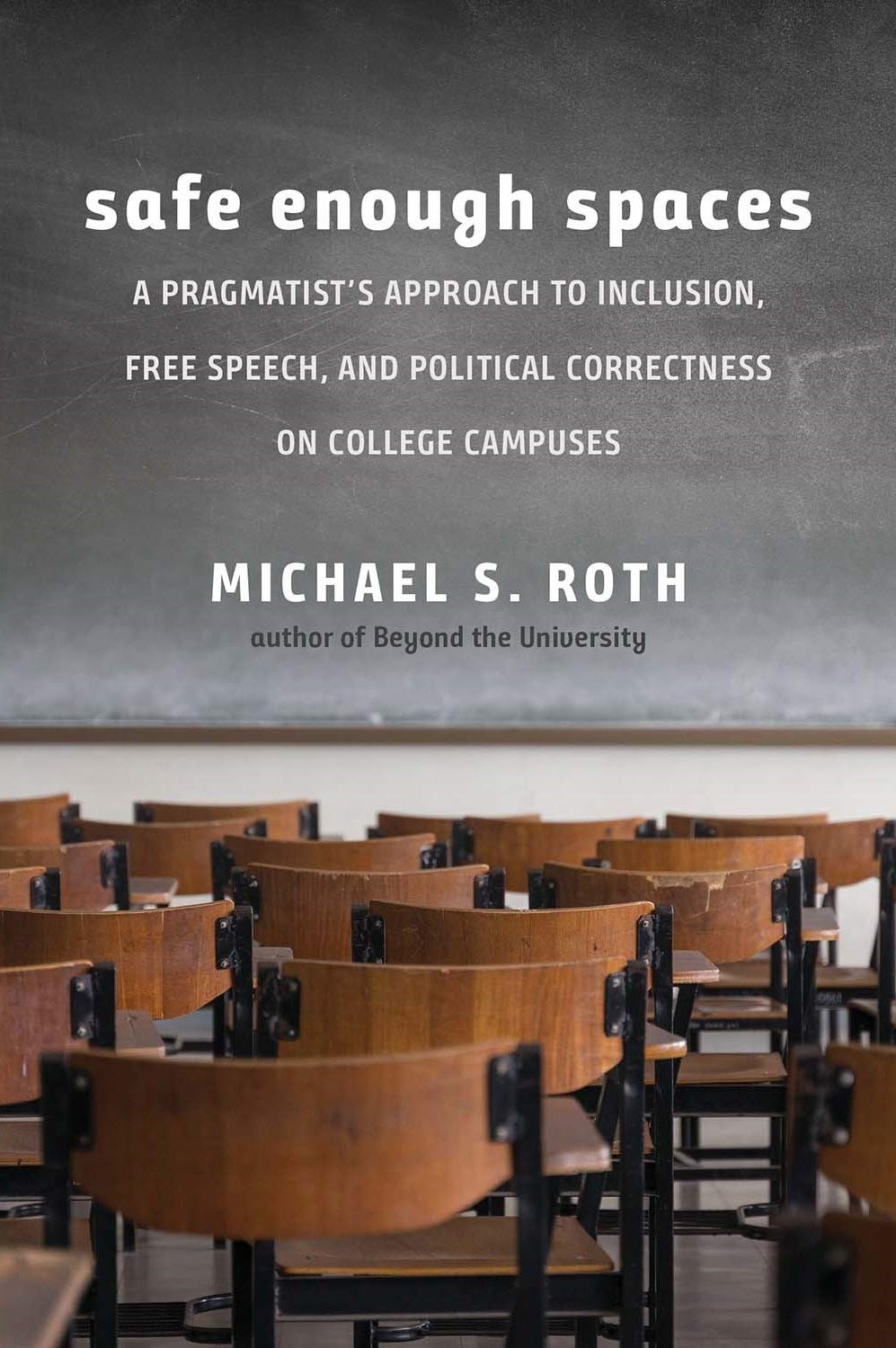 President Michael Roth ’78 spoke about his new book, “Safe Enough Spaces,” with Roxanne Coady, owner of the R.J. Julia Booksellers, at the University bookstore on Thursday, Sept. 26. While the conversation mainly focused on issues regarding free speech and political correctness on college campuses, student and faculty protesters also voiced concerns about University workers and faculty rights.

Coady began the talk by asking Roth about the timing of his book and why he chose to publish a work focused on safe spaces. Roth explained that he first became interested in how people conceptualize the past, whether that be through the history of philosophy, psychology, or political theory. But more specifically, while rooted in these foundations of history and memory, Roth wanted to defend liberal education in response to a plethora of critics complaining about higher education.

“I noticed this cascade of writers and pundits rolling their eyes on the page about college today, the problems of universities, closed mindedness, political correctness—there were these critiques that just went on and on,” Roth said. “It really came together as really a way of pushing back against what I think of as the tradition of Allan Bloom to the present, of people trying to write books that would sell to middle-aged people because they complain about young people.”

The conversation then pivoted to the exploration of issues regarding free speech on campus. Coady raised the question about the definition of free speech, asking Roth to explain which actions qualify as protected speech and which should have consequences. He first responded by outlining the history of protected speech in legal history, highlighting the decision made in Citizens United v. Federal Election Commission (2010) in which the Supreme Court granted free speech protections to corporate spending in elections. When free speech is defined as an expression, Roth said, it is generally protected by the First Amendment.

However, Roth ultimately argued that a free market approach to free speech isn’t sufficient, particularly in a university setting. Instead, there must be a certain kind of speech that fits moral, educational, and political judgments.

“At colleges and universities, we are always making judgments about what kinds of speech are educational for our students,” Roth said. “We should err on the side of breadth and to open our minds to thinking and new kinds of expression that might be educative. But that doesn’t mean we have to open our minds so much that our brains fall out and we can’t make judgments.”

In response, Coady brought up the concept of liberal snowflakes, asking Roth whether or not universities should mandate what Roth calls “affirmative action for conservatives.” Roth explained that he felt as though people often think that students are far more sensitive and fragile than they really are. In reality, he argued, students are comfortable engaging with opposing ideologies and support free speech at higher rates than older people. Roth cited originalist former Associate Supreme Court Justice Antonin Scalia’s visit to campus in 2012 as an example of student engagement in light of a controversial political figure.

“He spent the day on campus having intense interactions with our students,” Roth said. “I thought that was a victory. Now, I didn’t mean that’s a big key for free speech because I don’t think that that’s the issue. It was a victory for education. I know some people weren’t too happy to have a conversation with Justice Scalia. Maybe Justice Scalia learned something from our students. I’m not so sure, but in any case, they actually worked together in a way where they expressed their political views and the demonstrations. They had substantive discussions about the law and politics, and I think we’re [a] better campus for it. That kind of thing happens all the time American college campuses—it just doesn’t get reported on.”

Coady then directed the conversation to Roth’s personal experience dealing with difficult decisions regarding free speech at the University. Roth responded by explaining how he welcomed Judith Butler to campus, despite his strong personal opposition to the Boycott, Divestment, and Sanctions (BDS) movement, which promotes divestment from Israel-based organizations.

He also discussed his own encounters with student protesters.

“I’ve been surrounded by student protesters,” Roth said. “But I have a big mouth, and I can still talk, and I still do the talk, but it’s extremely stressful. I mean, nobody should have too much sympathy—I’m overpaid and underworked and all that. But it’s still very stressful, there are times after those events where people seem to be just getting to the edge of what’s allowed in protest.”

Coady then segued the discussion to issues regarding political correctness. Roth argued that students aren’t fragile, but are instead constantly wrestling with serious issues. Moreover, when asked whether or not the commitment to political correctness discourages diversity of thought, Roth argued that the right wing perpetuates the illusion that progressive students are tyrannical, when in fact they just don’t share the same ideologies.

“It is certainly the case that on many campuses, people are afraid to speak their minds, but it’s because they’re afraid—not because there’s tyranny,” Roth said. “They don’t want to get called a name. Well, that’s just too bad. Why don’t they get more courage? The problem isn’t that people are being tyrannical in their views—the problem is that other folks are afraid of getting their ideas attacked.”

The conversation then turned to a question and answer session, in which students and faculty protesters voiced their grievances with Roth and his views on safe spaces.

“President Roth, tonight you have painted a rosy picture of your administration, and you pioneering a progressive direction in the role education and a progressive take on safe spaces and free speech,” Joy Ming King ’20 said. “I’m a student, and I can tell you that the majority of students do not agree with you. One example of this is the very bookstore that we are in tonight. President Roth, your administration contracts with R.J. Julia, the company that manages this bookstore, and the workers in this very bookstore are paid as low as $12 an hour and struggle to find upward mobility. They are at risk of economic deprivation. How can you claim that our University is safe enough for members of our community who service us on the daily? Roxanne Coady, as the owner of this bookstore, do you think that this practice reflects your company’s values? Do you think that this is a safe space for your workers to live and work in?”

“I have been a small business owner for 30 years,” Coady responded. “We have employed a number of people, and we have always paid as high over the minimum wage as the economics of the business allowed…. I do feel proud about how we treat our employees.”

Roth added that he is very proud of the bookstore and the way management treats their employees.

Associate Professor of Molecular Biology and Biochemistry Michael McAlear, who has filed a lawsuit against the University for defamation and breach of contract, subsequently asked Roth whether or not maintaining safe spaces also applies to faculty members, particularly in regards to protection from harassment and due process.

Students concluded the talk by asking about the safety of custodial workers on campus and an incident last year when the police were called on students protesters.

“It’s an important question,” Roth said. “Just to be clear, I didn’t call the police on protesters, but the administration did because those protesters were pushing staff members, or those staff members felt as though they were being pushed, and I think you can remember what the police did—”

“You asked me a question, and I’m just trying to answer it to the best of my knowledge,” Roth said. “I am concerned that custodians have appropriate work assignments, and that’s why I talk to their union representatives. I don’t always think that Wesleyan students are in the best position to know what the custodians’ work is…. For many people that work at Wesleyan, they have representatives who are not studying American Studies, but who are actually working at a union.”