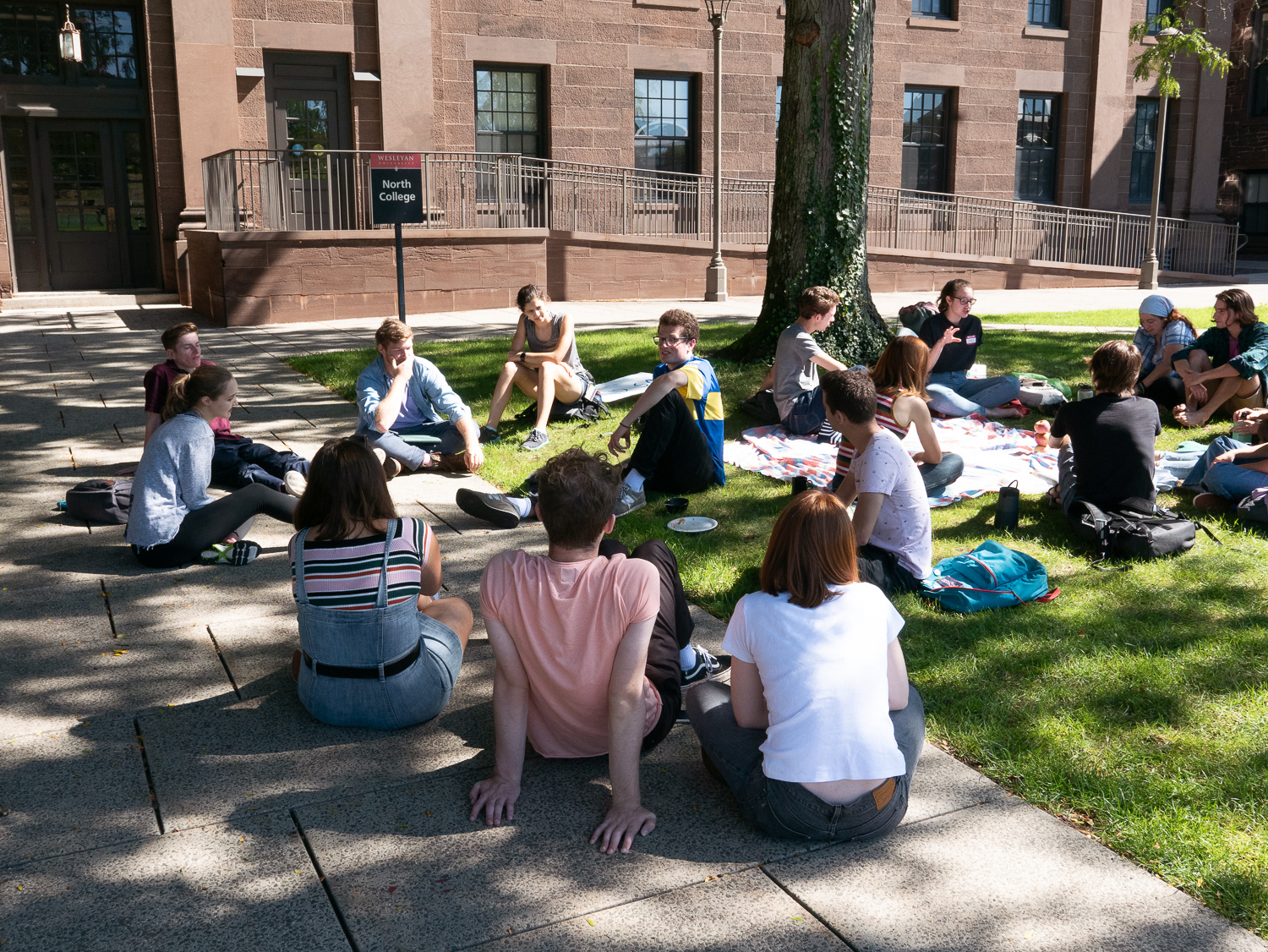 Climate Action Group (CAG) facilitated a discussion about climate change and climate activism in front of North College on Sept. 27. After President Michael Roth ’78 responded to CAG’s demands in a blog post, they revised the tone and format of the event, which was originally intended to be a follow-up protest to CAG’s Sept. 20 strike on campus.

“Our energy improvements are a step in the right direction, but we are facing a climate emergency and need to do more,” Roth wrote in his post.

Following Roth’s post, CAG called an emergency meeting to decide their next steps. The group gathered at a senior member’s home the night before the proposed second strike and read aloud the letter, commenting and fact checking as they read.

Roth addressed their demands for carbon neutrality and divestment by 2031.

“I am asking our Sustainability Office and Physical Plant to propose practical steps that would enable the University to reach carbon neutrality by its bicentennial while preserving its educational mission,” Roth wrote. “We will need input from across the University to reach this ambitious goal. Students have also asked that the university divest from fossil fuel investments by 2031 and that we use environmental, social and governance (ESG) considerations in determining any new investments. I am confident that we are well on our way to doing this.”

Because CAG felt Roth’s response had addressed their concerns, they decided to take a less confrontational approach to the event.

“When he responded in his blog post to our demands, we decided that it is most productive to really work with him and the University,” CAG member Reyna Schedler ’21 said. “So we wanted to still show that there’s a lot of student support for these issues and that we are continuing our motivation and are speaking about it but we didn’t want it to be an aggressive protest.”

The group decided they would hold a sit-in instead of a strike.

“IF YOU WERE PLANNING TO STRIKE, YOU SHOULD STILL HAVE THE ENERGY TO SHOW UP FOR THIS CONVERSATION,” Miles Brooks ’20 wrote in the Facebook event, to clarify the newly determined tone of the event. “Our work cannot only come in the form of protests. We must also do the harder work in between strikes to change our behavior and engage in discussions about our visions for the future.”

Before the sit-in officially began, Roth approached the group.

“The first thing he said was, ‘Let’s meet,’” CAG organizer Ernest Braun ’22 said. “And then he thanked us. He said that it’s probably hard to believe that he’s taking this seriously due to his position on campus.”

After Roth left, students began to gather around North College. Although the Facebook event boasted over 100 responses—even more than the event for the Sept. 20 strike—only about 20-30 students showed up for the redefined event. They discussed Roth’s letter, sustainability at the University, and beyond. Students also shared anecdotes about how climate change had personally affected them.

“Where I’m from in New Jersey, a lot of areas were very hard hit by Hurricane Sandy,” CAG organizer Irene Westfall ’22 said. “A lot of people lost their homes.”

Lincoln Alkind ’22 shared his experience as a Pittsburgh local who, like many other Steel City residents, has acclimated to the harmful effects of the city’s steel industry.

“Every time I go outside in the morning it smells like sulfur,” Alkind said.

Students expressed a desire to return from the realm of abstract discussion and advocate for concrete action.

“The next steps are definitely to meet with [Roth],” Schedler said. “It’s really exciting that he wants to help. The University is doing a lot to work on sustainability goals, and that’s something not a lot of people on campus really know. One of our demands was transparency but also facilitation of communication. Of course [the University] can always be doing more, but we could also be doing more.”

Westfall discussed how organizers could generate a larger discussion to get more people involved.

“We’re trying to start a conversation and bring as many people into the conversation as possible.” Westfall said. “About climate change, and how it affects you, and what your questions are. I think there’s a lot of people who want to get involved but don’t know where to start.”