Students Participate in Global Climate Strike on Campus and in Hartford 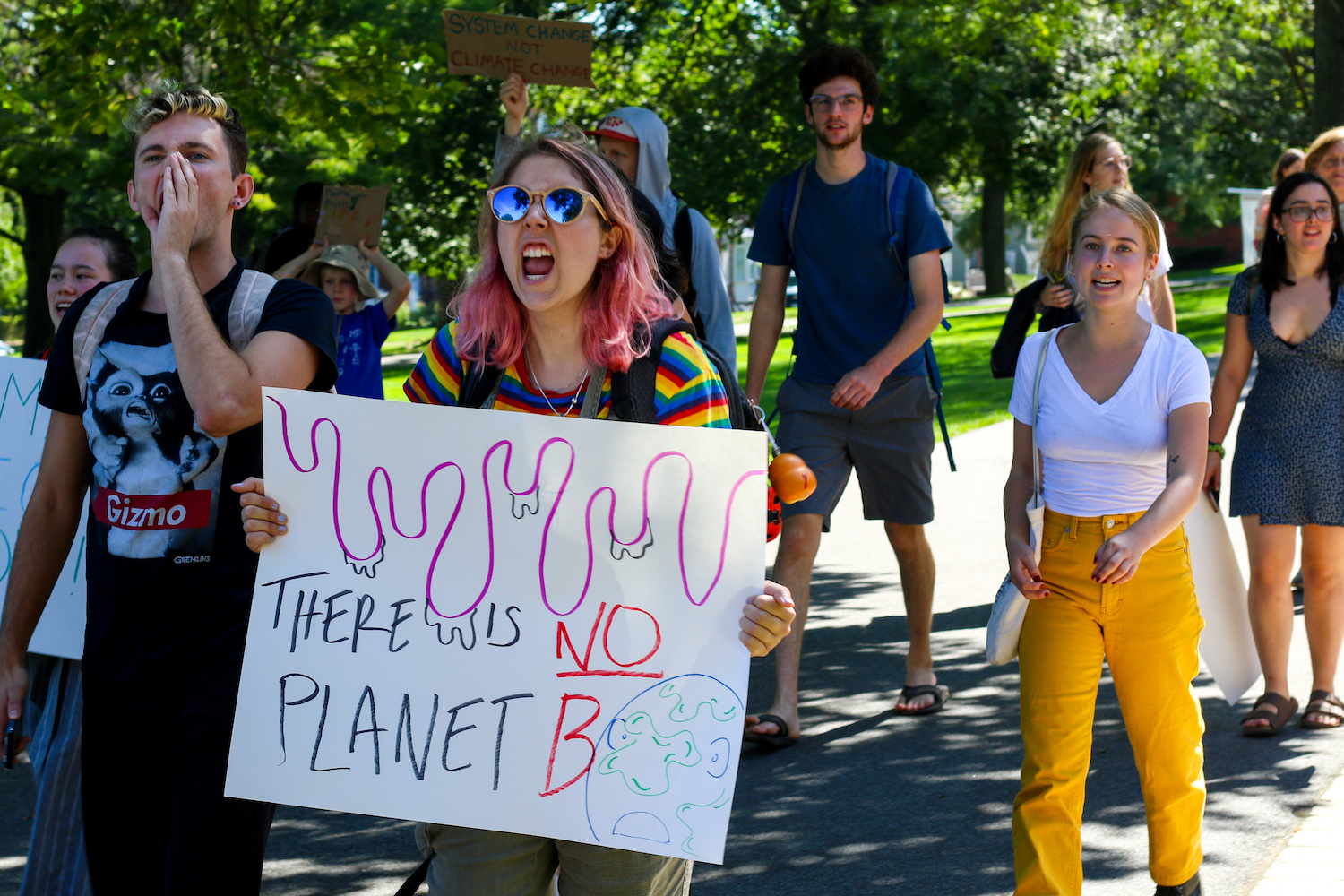 Hundreds of Wesleyan students participated in a Global Climate Strike to demand bold climate action from both the University and the Connecticut legislature on Friday, Sept. 20.

Some joined the Middletown chapter of the Sunrise Movement—a youth-led movement dedicated to combating climate change—to strike at the Connecticut Capitol building. Others attended the on-campus climate strike outside of Usdan University Center, organized by the Climate Action Group (CAG) and supported by the College of the Environment (COE).

Two days before the strike, President Michael Roth ’78 sent out an all-campus email announcing the schedule of Climate Strike events and revealing the board of trustees Investment Committee’s decision to halt any future investments in oil and gas.

“What does this mean?” Roth wrote. “It means that Wesleyan will no longer seek out managers specifically to invest in oil and gas in order to balance its portfolio as a whole. This is a significant step, as the University had previously sought to invest around 7 percent of its endowment in this sector. Furthermore, any new investment managers hired must meet our ethics, governance and social responsibility expectations.”

Some Climate Strike organizers were frustrated by this announcement, which they saw as an attempt by the administration to align itself with the protest without actually meeting student demands.

“The point is that it’s not divestment from oil, from fossil fuels,” CAG leader Ben Silverstone ’22 said. “It’s not divesting from oil. It’s also not boycotting oil or taking any steps towards renewables or carbon neutrality. I think it was an attempt to slow the momentum of our demands by giving us—placating us with something. But I don’t think anyone fell for it.”

At the start of the strike, students, Middletown residents, professors and even some of their children joined together outside Usdan. Ernest Braun ’22 serenaded people into the event on the piano, playing climate justice classics like “Blowing in the Wind” and “Big Yellow Taxi.”

Silverstone kicked off the event by reading aloud a letter written for University administration. The letter enumerates six demands to the University, including moving up the University’s goal for carbon neutrality to 2032, divesting from fossil fuels by 2032, transitioning to 100 percent renewable energy by 2050, and creating transparency surrounding University’s emissions data.

“The real issue is whether we continue to invest in corporations that pollute the planet,” Chair of  the Environmental Studies Program and Director of the College of the Environment Barry Chernoff said. “And just being very straightforward about it, if a University should be a place of responsibility, and if a University should be a place of high ethical standards, then it’s really hard for us to conceive of making money from people who are doing damage to the planet or doing damage to other people on the planet.”

The event went on to feature a series of speakers and performers that included University students, professors, and Middletown residents. Speakers included Middletown resident and activist Nur Fitzpatrick and Chair of the Science and Society Program Anthony Hatch. Both said that institutions must work fast to address the climate crisis and drew attention to the economic foundations of environmental injustice.

“Some radical ecologists have used the metaphor of war to describe the one-way abusive relationship between capitalism and the earth,” Hatch said. “Over an astonishingly small period of time, racial capitalism has transformed ecological and multi-species life, to the point where no material things exist outside of the private property relations that it establishes. For years I’ve asked students this one simple question: Name something that’s not commodified?”

The crowd was silent.

“You can’t name a damn thing that’s not being commodified.”

Leah Levin Pensler ’20 then spoke on the subject of divestment, a movement which calls on the board of trustees to pull the University endowment out of its investments in oil and gas companies. Pensler reiterated a focus on environmental racism and condemned the University for failing to divest from fossil fuels.

“Wesleyan continues to financially support companies actively destroying our planet, its people, and contributing to grave injustices around the world through environmental racism and resource colonialism,” she said.

Pensler then shifted to say that the University should divest its holdings in Israel.

“Not only must this discussion address how the University contributes to driving society towards climate catastrophe, but we must openly condemn the University’s financial role in atrocities occurring around the globe, namely the University’s holdings in Israeli apartheid, and the ethnic cleansing of Palestinians,” she said. “It is time for Wesleyan to divest from both the fossil fuel industry and companies entangled in the Israeli occupation of Palestine.”

WesDivest, in its recent revival, has narrowed its focus from divestment in general—which included divestment from holdings in Israel and private prisons—to divestment solely from fossil fuels. By narrowing the focus when WesDivest was revived, the new leaders hoped that the group would be able to pursue more targeted and effective action and to attract members who support divestment from fossil fuels but may not align themselves with other forms of divestment.

After the speeches, students then marched throughout campus, carrying signs and shouting chants. 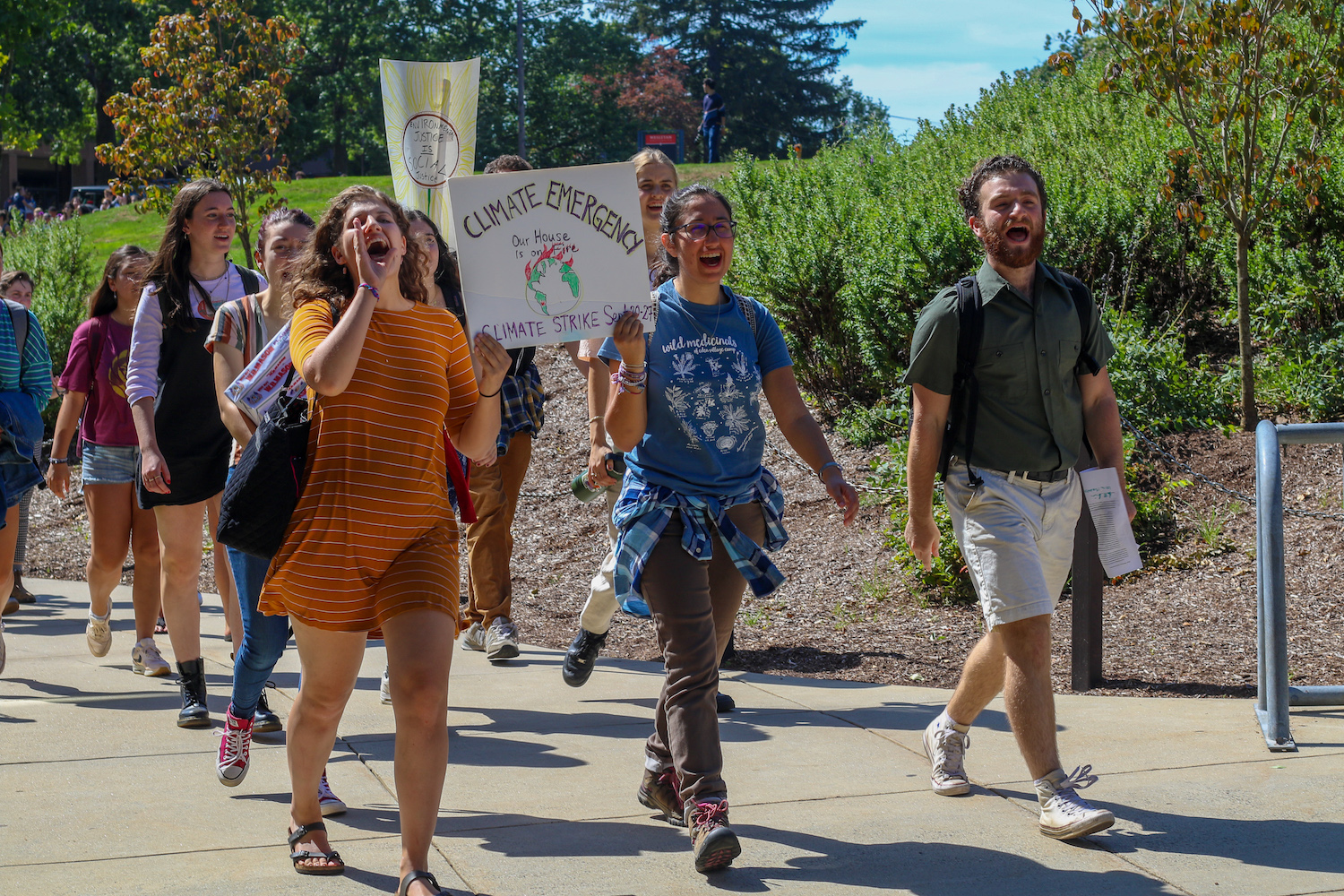 Meanwhile, in Hartford, nearly 50 Wesleyan students stood before the Connecticut Capitol building in a crowd of roughly 1,000 people. The excursion to Hartford was led by Jackie Duckett ’20 and Sanya Bery ’21, who founded the Middletown Sunrise hub and helped to organize the Hartford strike alongside youth activists like 15-year-old Sena Wazer.

Strikers held signs, shouted words of support, and listened to a range of performers relay stories, songs and statistics about the climate crisis facing our planet.

Organizers then led audience members in a series of songs and chants. Towards the end of the rally protesters did a die-in, where they laid down for several minutes without speaking.

“It’s a big visual statement to show that our lives are on the line for this issue,” Duckett said regarding the die-in.

Back on campus, CAG leaders escorted protesters on a march around campus, and then led a die-in of their own on College Row. After five minutes, CAG leader Brooks addressed the group.