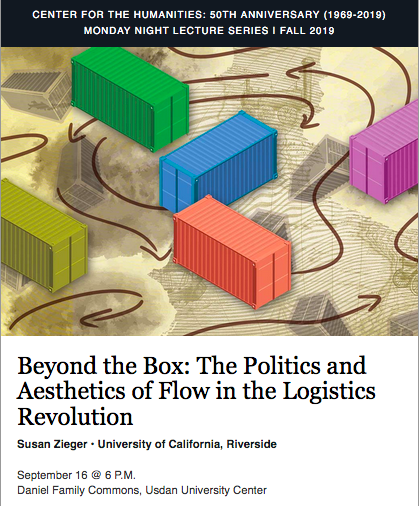 Professor Susan Zieger of UC Riverside presented a lecture titled “Beyond the Box: The Politics and Aesthetics of Flow in the Logistics Revolution” Monday, Sept. 16 to kick off this year’s Center for the Humanities (CHUM) Monday Night Lecture Series.

“The lecture series draws together scholars from across the disciplines, including eminent scholars and faculty fellows in residence at the Center, and faculty and students from across campus,” Director of CHUM and Professor of English and Feminist, Gender, and Sexuality Studies (FGSS) Natasha Korda wrote in an email to The Argus.

In the first of nine lectures this semester, Zieger spoke about how logistics has impacted history as well as the historical precedence for logistics.

“Logistical flow generates a dangerous logic,” Zieger said. “Just as it invests the abstraction of global trade with life, it drains metaphorical life from people who move together in masses, rendering them abstract.”

To convey this point, Zieger traced logistics back to the slave trade, specifically to the diagram of the Brookes Slave Ship of 1788, which laid out a plan to transport slaves.

“By illustrating how many enslaved people could be packed into the ship’s hold, the diagram enacted a logistical practice: the calculation of how to bring human goods to market in the barest condition in which they could sell,” Zieger said.

She continued this discussion of the continuity of logistics by arguing that the new visibility of logistics in the 21st century results from specific intensified reconfigurations of historical capital circulation, racial management, and military force.

The change in factory structure with the rise of logistics companies reflects this, she explained, considering that factories no longer produce entire products anymore. Instead, factories produce individual parts that are sent to logistics companies to finalize, therefore minimizing chances of worker strikes cutting off production lines and increasing productivity.

“Industrial processes like this have serious implications for labor and capital,” CHUM fellow, Associate Professor of History, Feminist, Gender, and Sexuality Studies, Environmental Studies, and Science in Society Jennifer Tucker wrote in an email to The Argus. “[Zieger] argues that they are critical for scholars and activists to study and understand in their own right—and to understand historically and with cultural specificity.”

Zieger concluded by discussing how logistics emerged at the intersection of global commerce, military violence, and racial order, as exemplified in the repurposing of cattle and shipping trains to transport people in the Holocaust.

“[Her lecture was] an ambitious talk that gave people from a wide number of fields and interests something to talk about,” Tucker wrote. “As the filmmaker Wim Wenders famously said, ‘The most political decision you make is where you direct people’s eyes.’”