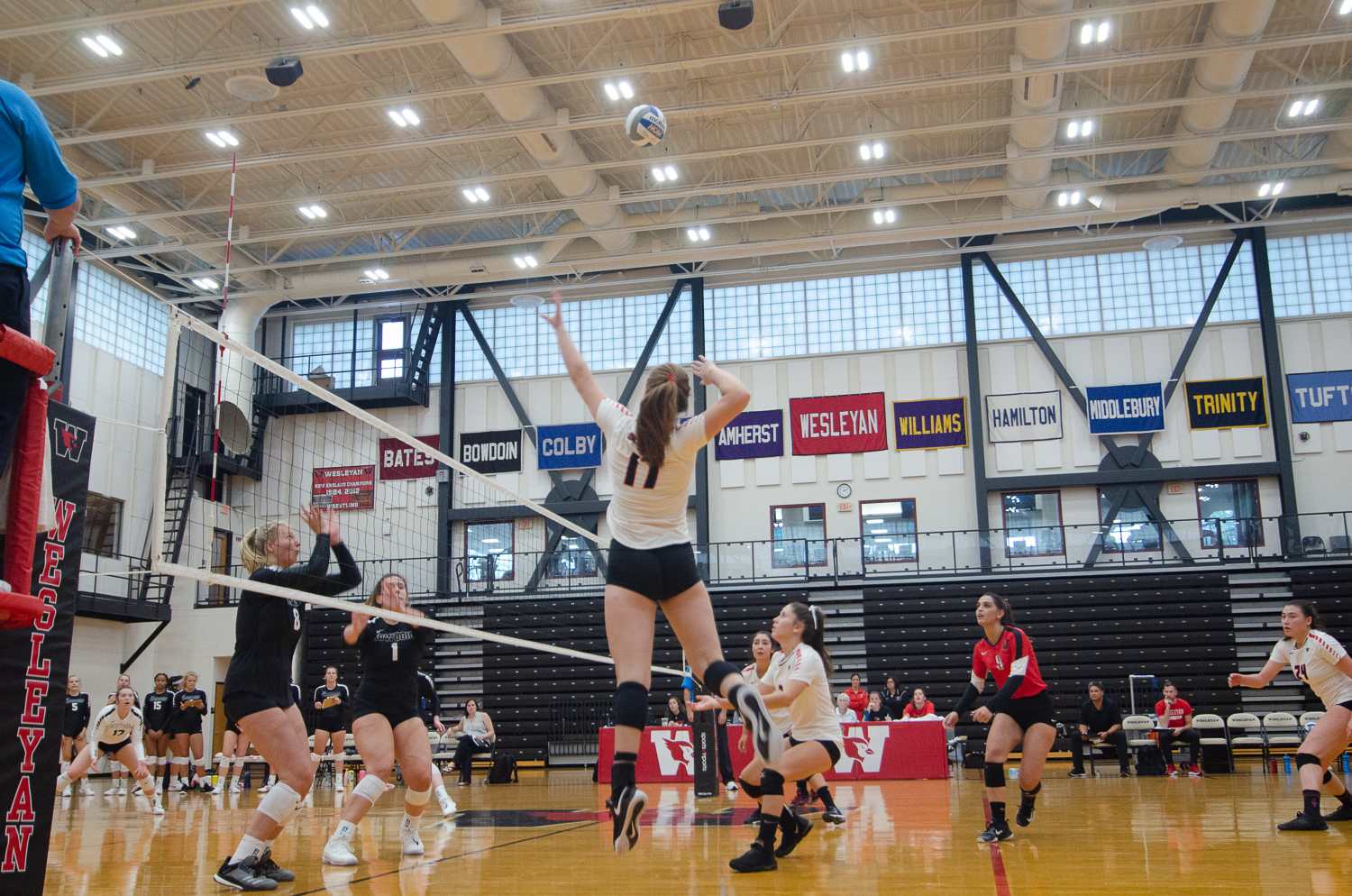 Volleyball was frankly dominant in its return from hiatus, demolishing Rhode Island College (RIC), Wellesley College, and Bowdoin College on the team’s recent opening weekend. The 16th-ranked Cardinals cruised through one match on Friday and two on Saturday without dropping a single set, launching them into the season with a perfect 3–0 record.

The season opener against RIC last Friday was not particularly competitive. The Red and Black rattled off seven straight points in the beginning of the first set en route to a 25–4 victory. With 15 kills off 24 attempts and no errors, Wesleyan scorched the Anchormen with a .625 hitting percentage. The visiting team made a markedly better effort in the second set, rebounding from a 14–3 hole and even drawing to within five. Yet a 9–2 run by the Cardinals, along with 16 kills and a .577 hitting percentage, put away the second set by a margin of 25–12. Wesleyan jumped ahead 7–1 in the third set and powered on to close out the match with a 25–10 win. As the Cardinals rose to 1–0, RIC fell to 0–2.

Rookie Bella Ahearn ’23 was the Cardinals’ top offensive weapon with eight kills. The Red and Black received additional firepower from junior Harper Graves and sophomore Mia Jago with seven kills apiece. Senior Mia Hogan led the team in hitting percentage (.750), while racking up six kills, all in one set. Sarah Brown ’23 paced the squad in assists, with 11, while Olivia Guidotti ’20 stood atop the scorecard with three assists and 10 digs.

Wesleyan continued its strong play against its phonetically similar rival from Massachusetts, Wellesley. Similarly to their opening set against RIC, the Red and Black started off strong and dropped five straight on The Blue. The team later embarked on a 9–0 run to set the margin at 17–5 and essentially seal a first-set victory, with a final score of 25–14. With a comparatively narrow lead at 19–15 midway through the second set, Wesleyan took over with a 6–1 run, emphatically clinching the set off a kill by Gabby Bennett ’20. The third set featured the tightest contest of the weekend. The Blue opened with a score to take their first lead of the match but would eventually fall behind the Cardinals 17–10. A ferocious rally by Wellesley brought them within four, then to an outright lead at 25–24. The two swapped blows late, before a 3–0 run by Wesleyan brought it its second victory of the weekend at 28–26. 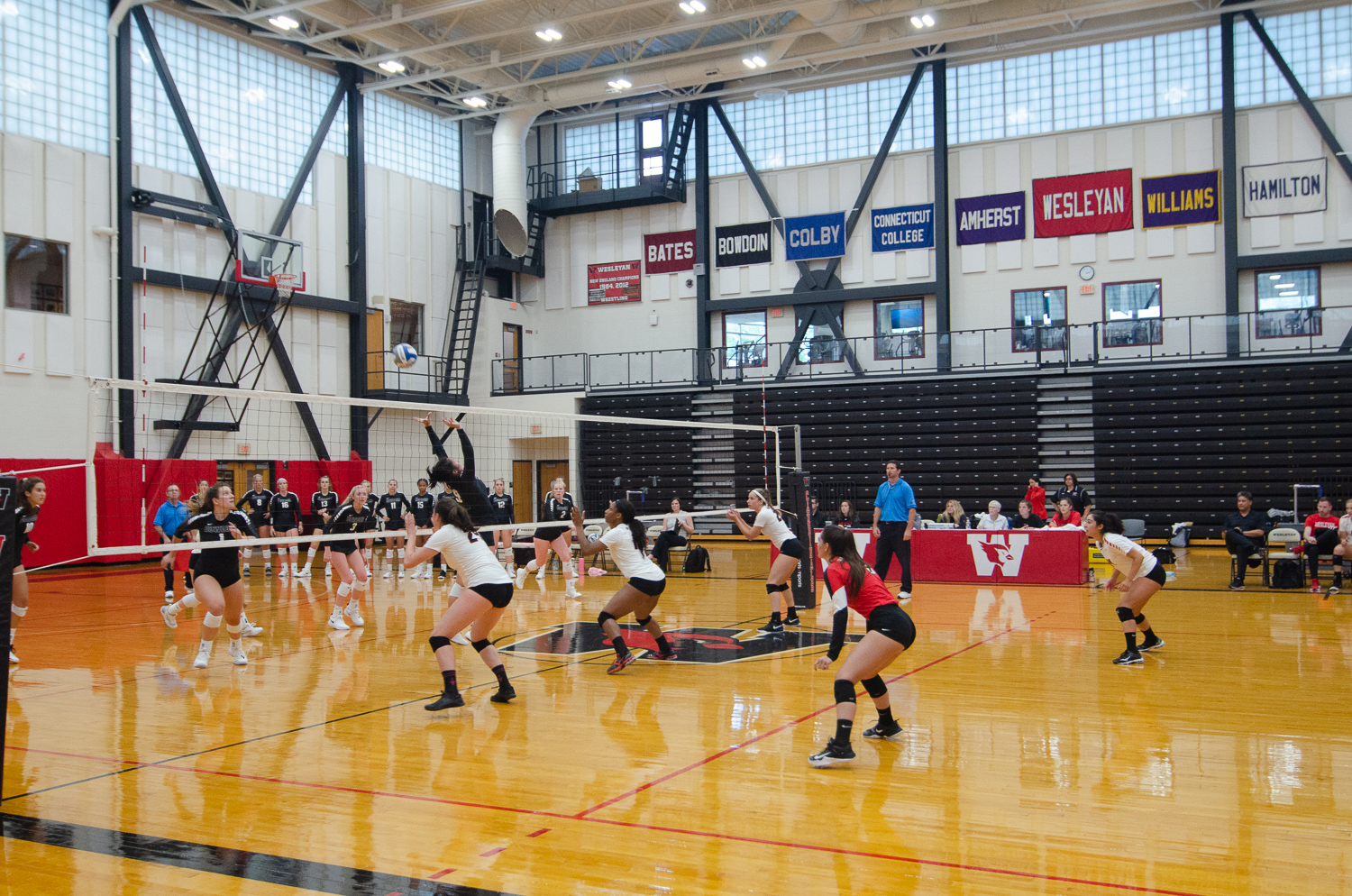 Prior to the season, the early non-conference match against reigning NESCAC champion Bowdoin might have looked intimidating, but the Cardinals dealt with the Polar Bears in the same fashion as they had their previous two opponents. Wesleyan came out on top 25–14 in the first set with a timely 7–0 run and strong defensive effort; the team held Bowdoin to just 10 kills and a .021 hitting percentage. The Polar Bears pulled ahead 10–9 in the second for their only lead of the game, but Hogan soon registered a kill to spark the Red and Black and push them ahead to 11–10. The Cardinals would lead for the remainder of the set and took it 25–20, although Bowdoin did manage to draw within two at 20–18. Although the Polar Bears were again able to draw closely to the home team at 13–10 in the third, the Red Birds embarked on a 9–2 run to seize a 22–12 lead. Consecutive kills by Stasie Litinsky ’20 and Graves gave Wesleyan a perfect 3–0 record for the weekend, while dropping Bowdoin to a surprisingly mortal 1–2.

Litinsky led in kills with 11 off a .348 hitting percentage, while Muraoka-Robertson shared the wealth with 33 assists. Bellizzi contributed a stellar defensive effort, ending the final match of the weekend with 24 digs.

When asked about his team’s performance following the matches, head coach Ben Somera emphasized his team’s depth and competitive spirit.

“These are two great team wins against quality regional opponents, and I believe the depth of our team is continuing to pay dividends,” said Somera. “In our own training environment, our attackers and defenders have to work very hard to be successful against each other, and that effort and mindset is becoming a habit that we take to our opponents.”

The Red and Black get a well-deserved week off before Friday the 13th, when they hope their luck doesn’t run out in a face-off against Vassar College. On Saturday, they take on Western Connecticut State University and SUNY Morrisville in Danbury. Conference play begins on Sept. 20 at home, again facing Bowdoin. After this weekend, it’s hard not to look at the Cardinals as the favorites for that match-up.