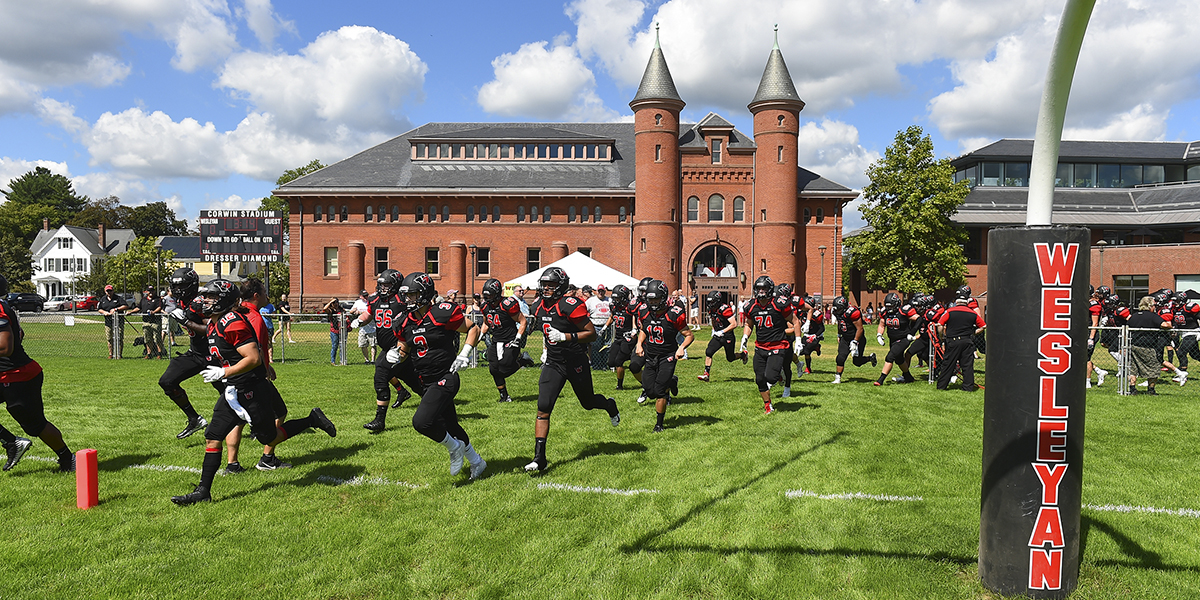 Football will begin their 2019–2020 season on Saturday, Sept. 14 at home against NESCAC competitor Colby. The Red and Black had a mixed bag of results last season and come back hoping to take on more of the ’CAC this fall. While the team had some convincing wins against solid opponents like Middlebury and Williams in Fall 2018, Wesleyan struggled against the very top of the conference, against teams such as Tufts, and lost a close game against Hamilton—even though the Continentals had the third-worst defense in the league. Even if they weren’t able to put up points, the Cardinals boasted the fourth-best defense in the league, and much of the strong defensive backbone will play again this season.

Many important players graduated last year, leaving big shoes to fill if the team wants to succeed and improve upon their 2018 record, 5–4. Veteran quarterback Mark Piccirillo ’19 provided a large amount of the impetus on offense with canny scrambling, consistent contribution to the rushing attack, and leadership to keep the team’s wheels moving. Similarly, Evan Hull ’19 was a dependable part of the passing attack last season. Both Piccirillo and Joe Wilson ’19 made the All-Conference Second Team on offense.

On defense, the terrifying linebacker duo of seniors Cole Harris ’19 and Brandon Morris ’19 both graduated having contributed over 110 tackles, 4 sacks, 10 tackles for loss, and 2 forced fumbles between the two of them last season. Furthermore, Jude Lindberg ’19, KJ Laguerre ’19, Bobby Nevin ’19, and Sam Green ’19 all produced consistently on the defensive line while Zak Foster ’19 and Pat Leone ’19 helped out in the secondary.

That being said, many important pieces still remain on campus and will hopefully contribute to a successful season. Junior defensive lineman Taj Gooden is the star of the show on defense, having made the All-NESCAC First Team with 35 tackles—17 and a half being tackles for a loss—and 9 sacks. Gooden had the second-most sacks in the conference, behind only the defensive player of the year at Amherst. In addition, Gooden was named a Preseason All-American by D3football.com and was nominated for the Cliff Harris Award, an award for small school defensive players.

Likewise, defensive back Ben Thaw ’20 took strides last year, making almost forty tackles and totaling two interceptions, which lead the team. His efforts also garnered him a spot into the All-Conference Second Team. Defensive lineman Jackson Eighmy ’21 and defensive backs Danny Banks ’22 and Eli Blair-May ’20 all had good seasons in 2018 and will look to build on their success this year.

On offense, Dan Smith ’21 is the most experienced quarterback, having played in a few stretches during last season. Junior running backs Glenn Smith and Sean Penney contributed to the Cardinals’ rushing attack last season and were prolific scorers. Together, they managed four touchdowns each and almost four yards per carry. The core of the passing attack last year will all return to the field this season, including wide receivers Dario Highsmith ’20, Hallvard Lundevall ’20, David Estevez ’22, Joe Scancarella ’21, and Matthew Simco ’22, while Smith also contributes as a pass catcher out of the backfield. Each receiver racked up at least 140 yards across the nine-game season. Highsmith, Smith, and Lundevall will all be crucial this year, as they contributed both in the air and in the end zone. Lundevall’s the favorite to look out for; last year, he scored four touchdowns and was a frequent target for Piccirillo in the red zone. Kicker Patrick Wolff ’21 will also be returning after a strong sophomore season. Wolff scored 44 points off six field goals, including one from 42 yards away. He also held a perfect record on extra points: 26 for 26.

This season is somewhat of a blank slate for the Cardinals. After Piccirillo started as quarterback for years, the team will need to find a new offensive identity in order to compensate for his scrambling, especially to find yards when the pass may not have been open. Luckily, the running attack has two great players available to help supplement that. The receiving core is also strong and balanced to help likely game one starter Smith find his feet.

On the other side of the ball, the defense lost some stellar players that helped make it so tough on opponents, but new leaders are emerging and will impose their will on whoever Wesleyan faces.

The season is loaded with difficult matchups against ’CAC competitors across the board. While the team starts off with some teams more easily overcome, Tufts, Amherst, Williams, and Trinity threaten the Cardinals in the last games of the season. The Red and Black hope to start off their season strong with a repeat win against Colby on the 14th.