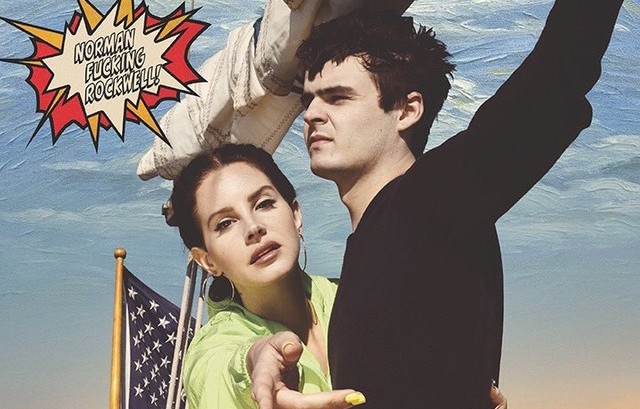 Norman Rockwell, the illustrator best known for his 50-year career painting spunky children and earnest adults at The Saturday Evening Post, used his art to present an idyllic portrayal of American life. His cozy paintings depict a rosy-cheeked, white picket fence–enclosed version of the country, one where the American Dream is alive and well. In comparison to its namesake, Lana Del Rey’s latest release Norman Fucking Rockwell! is less unreservedly wholesome, a fact that should be evident to listeners from the title alone. The jarring addition of an expletive in the middle of Rockwell’s name looks like both an emphasizing and a mockery of the artist’s ethos, and in Del Rey’s case could plausibly go either way.

Much like Rockwell, Del Rey’s work—full of references to jazz, James Dean, and Cipriani—has always relied heavily on a stylized version of Americana, and Norman Fucking Rockwell! is no exception. The album name drops a parade of quintessentially American icons from Robert Frost to Kanye West and vividly conjures the 1970s Laurel Canyon rock scene. The wealth of her cultural vocabulary is one of the most entertaining characteristics of Del Rey’s songwriting, but it has also contributed to the somewhat polarizing nature of her work. Depending on who you ask, she is either a 21st-century prophet, deftly illustrating the existential angst of modern America, or an airheaded emblem of the social media generation, mythologizing a construction of American life that doesn’t really exist in order to disguise the underlying emptiness of her music.

Yet despite her reputation for making pretty, empty music for neurotic millennials, the truth is that Del Rey is one of the sharpest lyricists in the game, and Norman Fucking Rockwell! features some of her strongest work yet. It’s true that the album features plenty of lines that would be right at home in the Twitter bios and stick-and-poke tattoos of angsty liberal arts students. However, the singer writes with a sly self-awareness that sets her apart from other sadcore pop crooners, as when she describes herself “tearing around/in my fucking nightgown/24/7 Sylvia Plath.” Like a modern-day Fitzgerald or Babitz, Del Rey manages to document a distinctive cultural moment while simultaneously participating in it.

Norman Fucking Rockwell! was produced by Jack Antonoff, who has worked with such pop music titans as Lorde, Carly Rae Jepsen, and Taylor Swift. However, the album abandons both the soaring flourishes that characterizes many of Antonoff’s productions, and the baroque, hip hop–influenced style of Del Rey’s earlier records. Where her older music often sounded maximalist and sludgy, the aural equivalent of a dramatically filtered Instagram photo, the new songs feature gentler instruments and a more stripped down sound.

Crucially, the folksier sound and toned-down production of Norman Fucking Rockwell! helps emphasize the raw emotionality of the lyrics. While Del Rey’s familiar jaded wit is still very much present—in the album’s title track, she coolly and devastatingly informs the song’s subject that “your poetry’s bad and you blame the news”—she has discarded some of the camp and artifice of her musical persona, making room for genuine vulnerability. This is exemplified in songs like the magnificent “hope is a dangerous thing for a woman like me to have—but I have it,” a piercing, minimalist musing on grief and regret.

At its best, Norman Fucking Rockwell! is a smart examination of emotional chaos on both an individual and a societal scale. As in her past work, Del Rey spends plenty of time singing about dysfunctional relationships and personal angst, but this time the album builds towards something bigger and more ambitious than the interior life of a single woman. It’s easy to mistake her introspection for self-obsession, but in fact Norman Fucking Rockwell! is a clear-eyed commentary on the emotional consequences of living in a slowly disintegrating society. In 2017, Del Rey publicly decided to stop performing live in front of her signature backdrop—an enormous projection of an American flag. For a singer who has built an entire image around Americana, it was a bold move. In many ways, Norman Fucking Rockwell! is a continuation of that decision. As much as the album is steeped in references to American culture, the end result is less anthem than elegy. As Del Rey sings on “The greatest,” “the culture is lit/and if this is it/I had a ball/I guess that I’m burned out after all.”