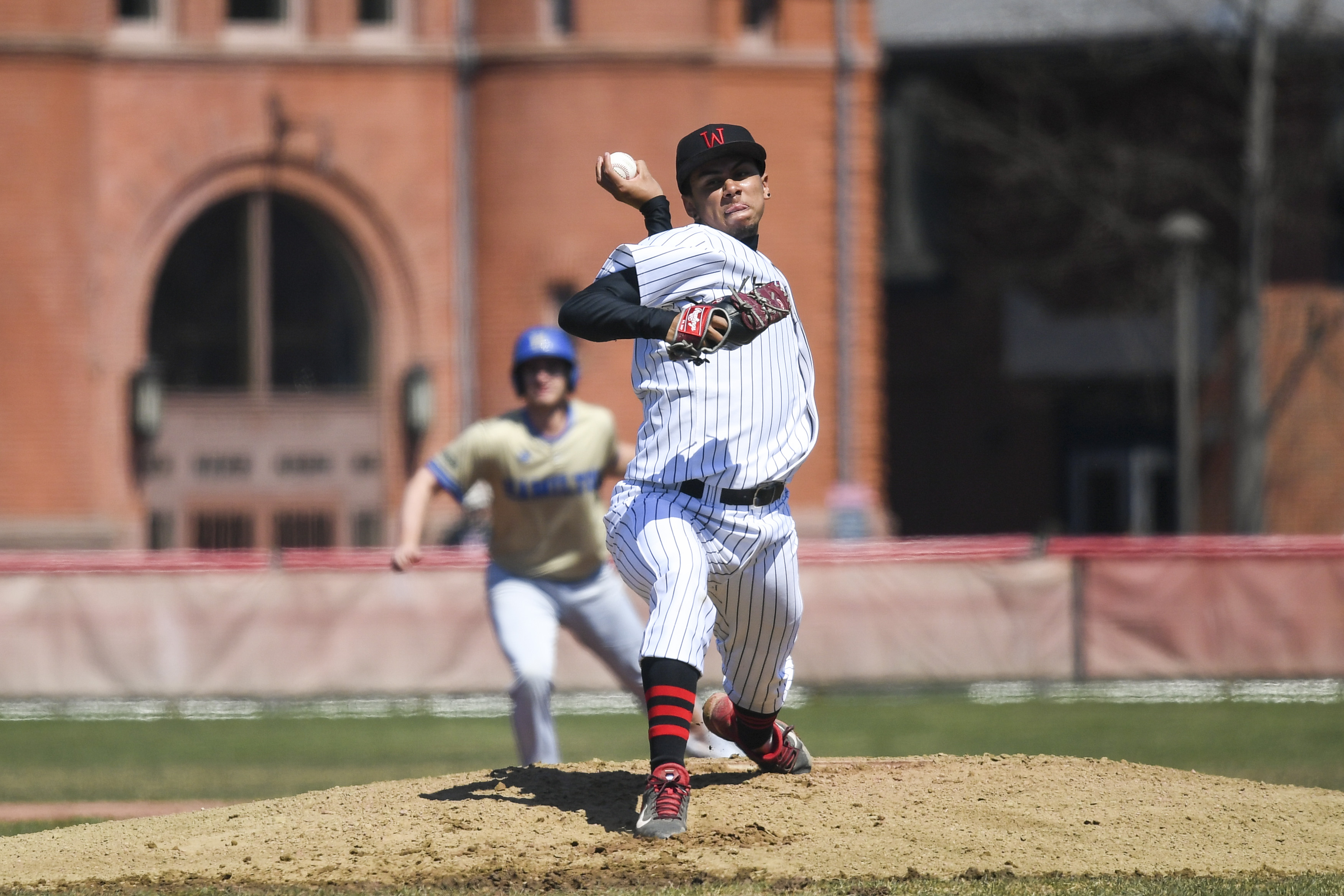 Cardinal baseball fought through another tough week, going 3-3. The team once again dominated in non-conference play early, but struggled to finish strong against tough NESCAC opponents.

On Tuesday, April 30, Wesleyan started off the week with a matchup against Saint Joseph’s College. After falling behind by two runs in the first inning, the Cardinals battled back, swapping blows with Saint Joseph’s until the sixth inning, when the Red and Black blew open the game by scoring three runs. From there, Wesleyan never looked back, finishing strong for a final score of 9-3.

Wesleyan continued the streak, besting St. Joseph’s on the base-path, stealing six times over the course of the game. At the plate, Adam Geibel ’22 and Jake Alonzo ’20 each smashed doubles, while Chase Pratt ’20 and Alex Cappitelli ’20 cruised for three-baggers. Overall, it was a balanced effort for the Cards, as strong offense and base running combined with a six-pitcher effort to hold down Saint Joseph’s offense.

On the first day of May, the Cards continued their back-to-back midweek games with a local matchup against Western Connecticut State University. However, on this day, it was clear who would come out of this game as the pride of the Constitution State. The Cards were backed by another strong pitching performance from Mike McCaffrey ’19. The southpaw pitched six innings, striking out five and allowing no earned runs. Wesleyan’s offense once again dominated; after a dormant start to the game, it exploded for a five-run fifth inning. The Cards continued to slam Western Conn., winning 10-3 as the Red and Black brought home another victory in its packed slate.

With the success of their midweek games behind them, the Cardinals faced one of their biggest tests of the year, a weekend three-game set against Williams.

“It was definitely a huge boost for us to win both of those midweek games to give us confidence going into the weekend,” Andrew Kauf  ’20 said. “Right now we are focused on Williams, due to the high stakes that go along with this series. We have confidence in all of the guys on this team to perform when their name is called, and we are embracing the next man up mentality, especially as it pertains to pitching, we’re going to need a lot of it.”

“The great thing about being in our situation is that every game is a playoff game,” Clare said. “Of course, we would love to already have a playoff spot locked up, but playing in and winning these types of games are why we chose to play the game in the first place.”

The first game of the set was a strong pitching matchup between Clare and Williams’ undefeated ace, Jack Bohen.

“It’s the same narrative this weekend: taking it inning by inning, pitch by pitch, and making their hitters earn it at the plate,” Clare said.

Unfortunately, Bohen was nearly unhittable on the day, going eight innings and giving up no earned runs. Clare uncharacteristically had five walks, and the Cards made two errors behind him. Williams took the first game of the set 6-1.

The second game of the set was a classic pitching duel. The Cards leaned on Kelvin Sosa ’21, who delivered a complete game shutout and struck out seven. The lefty now sports an impressive in-conference ERA of 1.83. At the plate, Wesleyan had to battle for every run they put up. Cappitelli and Danny Rose ’19 each plated a run; Rose’s first-inning double gave our Cards a lead they never looked back from. Wesleyan devoured the Purple Cows 2-0.

The final game of the series proved difficult for the Cards against Little Three powerhouse Williams. In another hard-fought game, Wesleyan came up just short, despite a two-run homer from Jonny Corning ’20. The Red and Black dropped the game 5-3, as Williams battled back from a 3-1 deficit to score in the seventh, eighth and ninth innings for the comeback victory. Despite a heartbreaker like this, Wesleyan will be pleased with an errorless game in the field, as well as their eight hits against the NESCAC powerhouse.

With rain on Sunday, Wesleyan’s doubleheader against Trinity was rescheduled. The team faced off with a new matchup on Monday, May 6, on Andrus Field. Unfortunately, the Cardinals’ home advantage wasn’t enough to push the team to victory, and Wes fell 2-0 to the Bantams. This loss came after eight scoreless innings, a back-and-forth stalemate that lasted two hours. Trinity pulled ahead, however, in the top of the ninth to take the ’CAC victory. The Bantams are now third in the NESCAC East, while Wesleyan remains at the bottom of the NESCAC West.

Although Wesleyan now falls to 5-8 in conference play, each game this week was a hard-fought match, with the difference in the skill level of these teams amounting to a coin-flip. Wesleyan cannot help but be proud about their season thus far, as the team has gone toe-to-toe with each team it has faced.