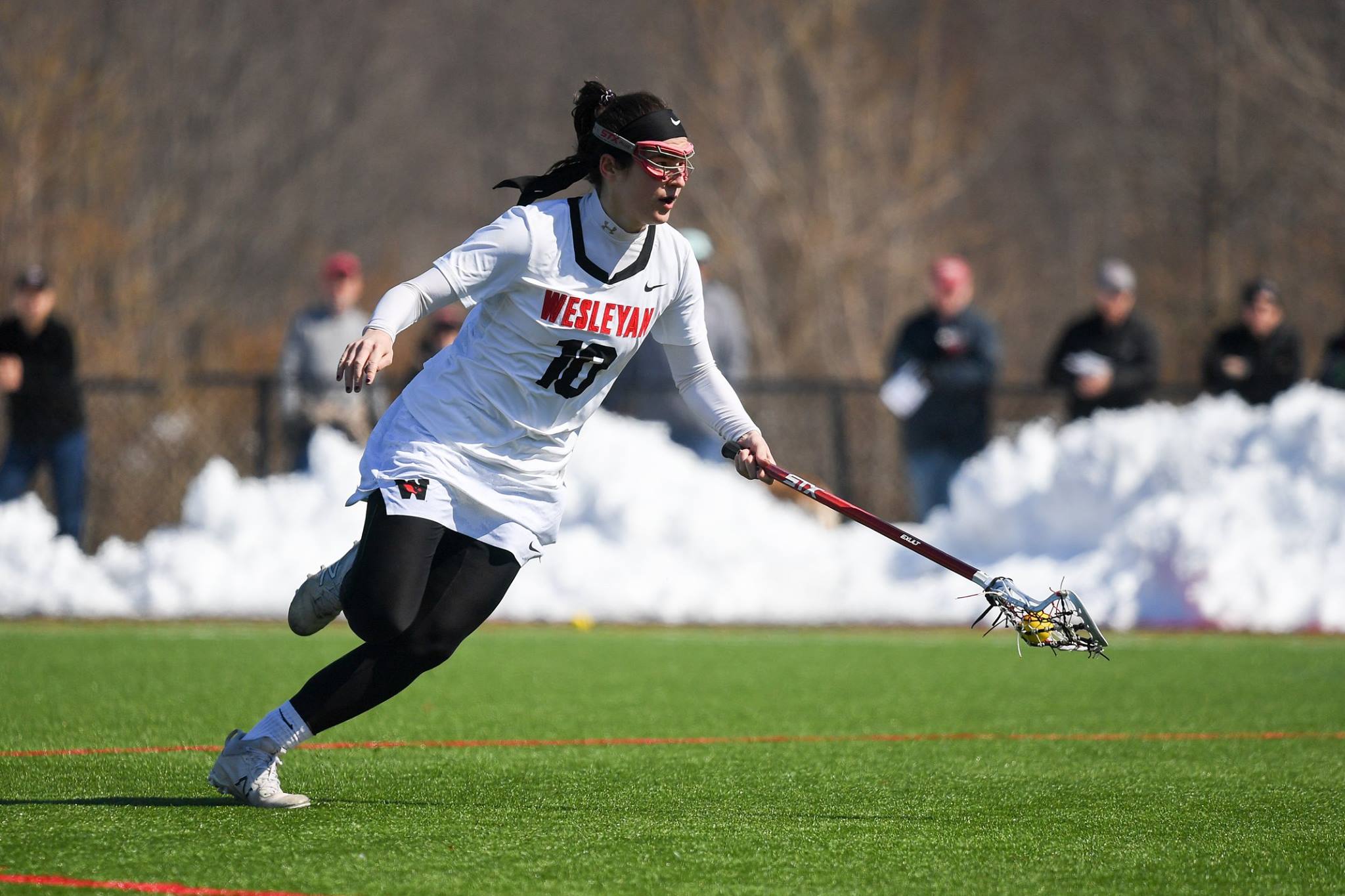 Abby Horst ’19 wanted to study business in undergrad. She dreamed of going to college near a big city and playing a sport; she considered hockey and cross country. Instead, she landed at Wesleyan, where she will graduate this month as an economics and environmental studies double major. She will also graduate as a four-year member and history-maker on Wesleyan’s Division III women’s lacrosse team.

“Ever since I actually applied, I realize how much more I just appreciate Wesleyan for Wesleyan rather than just for lacrosse,” Horst, who is from Pomfret, Conn., said. “They say to do the ‘broken leg rule.’ If you break your leg, would you be happy at this school? I could definitely see myself here not playing sports, because you can do anything here.”

Horst began her first year on the team during the 2016 season, when the Cardinals finished with a 5-9 overall and 2-8 conference record. Ever since her freshman year, the team has continued to break records with each passing season; now they stand at 14-3 overall, with a reversed 8-2 conference record. Horst contributes this success to the team’s culture and their coach, Kim Williams.

“[Kim’s] definitely been the change that the program needed,” Horst said. “Freshman year we won two or three games in the NESCAC. Ever since then we’ve broken school history for sophomore year, junior year, and senior year. Better and better records. Kim needed one year of revamping this program…. It takes a while for a coach to instill a winning mindset and for us to believe when we go onto the field that we deserve to be there and we deserve to win. That definitely took a long time. In my sophomore and junior year, we would show up to games and be nervous and scared. But I think that’s changed a lot because of that confidence that Kim has instilled in us. She’s been such an integral part of the success.”

Williams’ team transformation came with a little bit of pressure this season. Her first baby’s due date was the same day as the team’s first game. Williams began to go into labor on the Thursday before the Saturday game, but Horst recalls Williams staying at practice, even extending it to do some extra shooting.

“She really raised the bar for what excuses skipping practice,” Horst said. “Everyone says they’re really stressed—no. She was in labor at practice. She goes to the hospital and has the child, and the next day she’s at the game and can’t leave. She was the first coach in I think all of the NCAA to get to call into the coaches on the sideline to be able to give tips and such. We had an interim head coach for the first five or six games, but again, it was the perfect time in Kim’s four-year tenure to be able to take that time off. We all knew what to do and how to work hard without her, even though she wasn’t there. She was literally in the hospital and had her first newborn baby and was watching our game, and calling it and giving tips for the sideline.”

Williams quickly returned to coach the rest of the team’s season in person and has led the team to victory ever since.

“Obviously, her being a badass, she said, ‘I’m taking no maternity leave, I’m going to have the baby and come back as soon as possible,” Horst said. “She’s our inspiration, and everyone tries to work hard for her. She’s the hardest-working person, and one of the hardest-working coaches, from what I’ve heard from the other coaches in the athletics center.”

With Williams’ leadership, the team has seen its most successful run yet, winning a record number of program and conference games this season. The Cardinals won their first postseason conference game last week, and though they fell to Tufts on Saturday in the NESCAC Semifinal, they will continue to compete in the NCAA Tournament later this week.

“I think we’ve gotten our mojo back, but I think the key is having a lot of experience,” Horst said. “We need people out there who are confident playing in close games. We returned every starter from last year, so it’s essentially the same team from last year, just a year more experienced. You can really see that on the field.”

Horst believes this shared team experience and closeness has been integral for their success this season.

“This team is really special in the way that everyone respects each other and knows each other,” she said. “I think that’s one of the reasons we’ve been really successful. We also have a really big team. Obviously not everybody plays, but the bench has been such a fun part of celebrating. It’s such a fun part when the bench is high energy.”

Horst is one of the returning starters and has led the team on offense this season. She garnered both her 100th career point (goals and assists) and 100th career goal, accomplishing the feats just three days apart. She also earned All-NESCAC First Team, NESCAC Player of the Week, and Division III Offensive National Player of the Week.

She’s also done a lot for Wesleyan outside of lacrosse. She’s a proud Summies worker and is a co-student chair for the Athletics Title IX Committee, along with Jack Alberding ’20 of the men’s basketball team.

Horst is most proud of the Committee’s efforts this year. In the fall, she helped organize a speak-out for the athletics community, providing a safe and open environment for individuals to share stories of sexual harassment and assault.

“There’s a disproportionate amount of sexual assault within the athletic community at most colleges,” Horst explained, discussing her motivations for planning the event. “We are a part of this community…[and] it’s frustrating to be a part of a community that represents and even protects perpetrators. We need to take back this space.”

While Horst’s lacrosse commitments pick up in the spring, she has continued to work with the committee to create a liaison program in the athletics community. Along with Alberding and Director of the Office of Survivor Advocacy and Community Education (SACE) Johanna DeBari, Horst has chosen two members of each team as a part of the system. One underclassmen and one upperclassmen athlete are responsible for communicating with the committee and their team, sharing events on campus, notifying teammates about bystander training, or even encouraging them to support other student groups.

“Athletic teams have the opportunity to make people go to things,” Horst said. “If your team captain or leader tells you to go to something, you’re going to go. Everyone else on campus has no obligation. They’re not a part of this group where you have to do things that they tell you to do.”

One of the first successes of the liaison system was with this semester’s Take Back the Night event, which was part of Survivor Solidarity Month. Because of the Committee’s organized outreach to the athletics community, numerous athletes and teams were found sitting on Foss during the performances and supporting the event.

With Horst graduating this May, she’s helping the Committee find someone to take on her role next fall. Her sister will be coming to Wesleyan in the fall as a member of the class of 2023, and Horst hopes she can get involved in the Committee if she isn’t too busy playing on both the soccer and lacrosse teams.

“I told her that Wesleyan has so much more [than sports] to offer!” Horst said. “I was able to go abroad and do so much at Wesleyan in the offseason.”

As Horst prepares to leave Middletown, she is making plans to relocate to Boston after graduation with two of her teammates. She hopes to continue playing sports in any capacity she can, whether that’s pick-up soccer, classes, or just running.

Before she receives her cap and gown, however, she’s got a few more games to finish. Women’s lax has a bye in the first round of the NCAA Tournament but will host match-ups this weekend in its Division III National Competition.

“Every game now is one you have to play to live another day,” Horst said. “You need to have the mindset that every moment can be the last.”