TEDx Conference Covers Health, Heart, and the Pursuit of Happiness 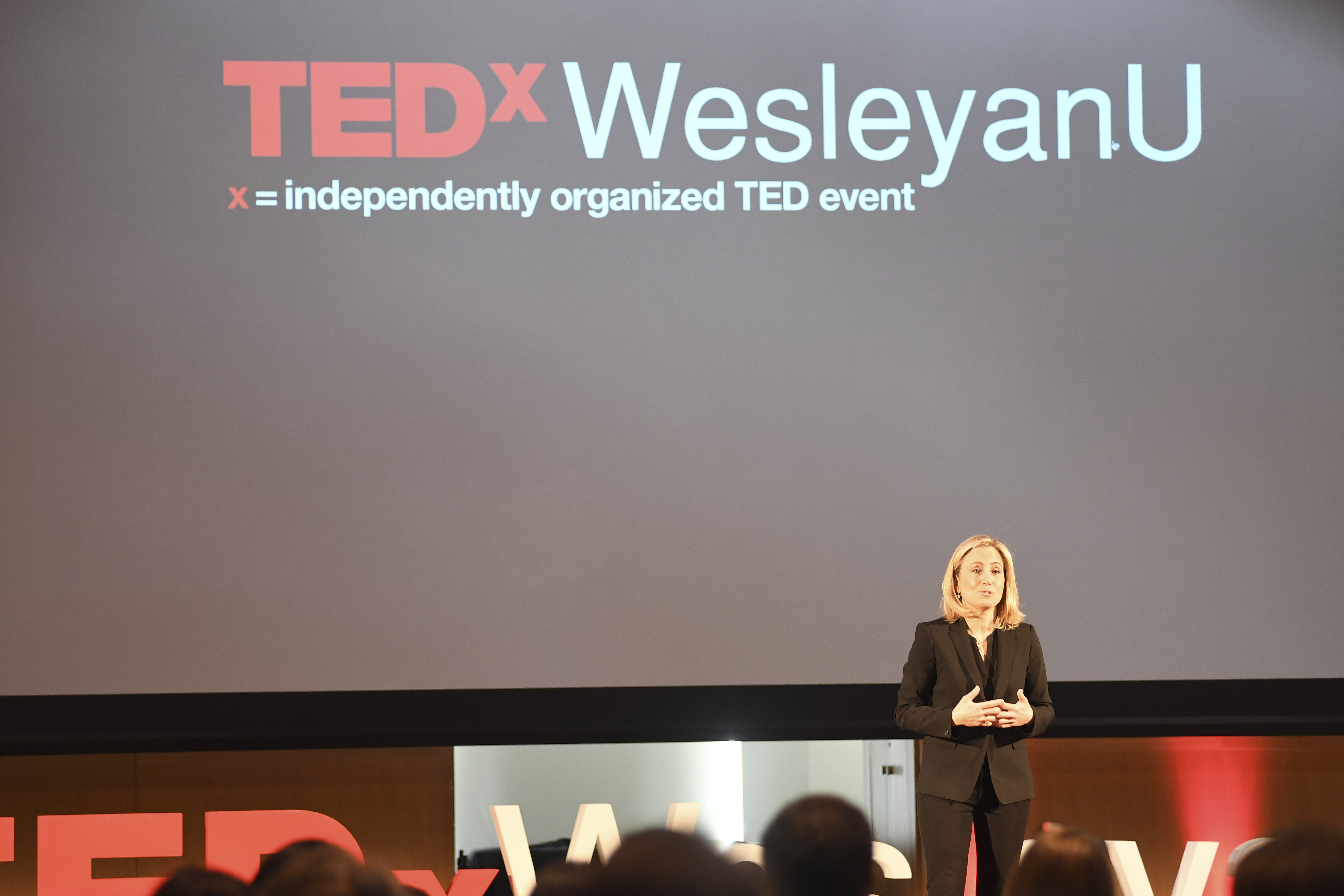 On Saturday, April 27, the University hosted its second annual TEDx event, addressing themes of representation and politics, health and technology, and finding happiness in the little moments. The conference was entirely student organized and received funding from numerous departments and campus organizations. This year’s event featured seven speakers who added their own personalized perspectives to the topics they discussed.

“The whole point of our conference here today is to promote thought diversity on campus,” said event organizer Leo Merturi ’20. “As a liberal arts college, sometimes we might be known as a bubble of our social sphere, and we’re much more than that.”

One of the first speakers was Representative Jahana Hayes (CT-05), the first Black woman to represent Connecticut in Congress. In her talk, titled “If Congress Starts to Look Like Us: Expanding Participation in Our Democracy,” Hayes discussed the importance of political representation. After the election in 2016, Hayes began considering how she could impact her community on a larger scale. As a history and civics teacher, Hayes felt uniquely prepared for the role of congressional representative, yet she was met with pushback.

“People said, ‘there’s no way you’re going to do this,’” Hayes recounted. “‘You don’t have the network, you don’t have the money, you can’t figure it out,’ and I said, ‘But I’m affected by everything that happens in the country.’”

Hayes pushed back against the rhetoric that she would not be prepared for the position, as she believed that her community deserved a representative who not only understood their needs, but looked like them as well.

“Unless and until we expand what [Congress] looks like, and who gets to participate, we have a problem,” Hayes said.

Hayes additionally emphasized that our democracy only works when everyone feels heard, recognized, and represented.

“We the people is you, is me, is us,” Hayes said. “Our government works. I am what happens when it works correctly.”

Alexandra Bergstein ’88, a state senator for Connecticut’s 36th district, discussed a similar experience to Hayes regarding resistance to her candidacy, but in her case, the problem was internalized rather than external. Bergstein says that patriarchal values shaped the course of her life, holding her back from pursuing what she wanted. However, at the insistence of her friends, she ran and became the first woman to hold the position of state senator for her district, and the first Democrat in 88 years.

“When I turned 50, I made a simple decision that changed everything,” she began. “I decided to live fearlessly, and to reclaim my narrative of what success was. Because after 50 years on the same path, I realized that I had been giving my power away to two of the strongest forces in our society: patriarchy and privilege.”

Bergstein explained that the decision to run for state senator marked a pivotal moment in her life, in that it allowed her to recognize the way she had become embedded in the patriarchal system—by becoming financially dependent on a man and losing autonomy—and also within a system of privilege, by buying into the notion that money improves one’s life. Bergstein noted that running for state senator allowed her to see beyond these frameworks and begin living and working in a manner that rejected them.

“I have never felt more alive and fulfilled, and I didn’t even know it was possible,” she said. “And the more I put myself out there, the more love and purpose I got back. And all those layers of conditioning telling me who I should be and what I should want melted away. I was breaking the bonds of patriarchy and privilege and anything else that told me I was not enough.”

Robin Cook ’62 decided to take a different approach to changing policy, approaching change through fiction rather than a legislative position. Cook, a physician and novelist who has sold over 400 million copies of his books, gave a talk about the role of health policy, and by extension empathy, in mystery novels and thrillers.

Cook’s fiction primarily centers on issues of health, stemming from his experiences in medical school and his subsequent disillusionment with the process of becoming a doctor. Cook had gained the impression, from fictional portrayals of the medical world, that the primary motivation behind doctors was a moral commitment to helping humanity. However, when he entered medical school, he experienced an atmosphere of stiff competition, which caused him to question how medical students could retain their senses of altruism that led them to the field in the first place. Based on these experiences, Cook decided to write books that would clarify the reality of the medical field.

Cook noted that fiction has the capacity to inspire empathy, piquing readers’ interest about the relevant, real-world systems he addresses in his work.

Cook hopes to wield fiction as a tool to change the U.S. healthcare system.

“My idea is to use fiction as a way to…change the fact that we have the most ridiculous healthcare system,” Cook said. “We need to change back to a system in which the patients are first and business is not first, so that’s what I’m hoping to do and I also invite other people to do that too.”

While Cook plans to change health policy through fiction, Laman Gray ’63, P’92, P’99 is working directly in the medical field. He addressed the role of the U.S. Food and Drug Administration within his larger talk about the history and future of treating heart failure. Gray performed Kentucky’s first heart transplant in 1984 and is working on the development of an entire artificial heart.

As Gray explained, over 5 million people in United States are in heart failure, and though heart transplants are a very successful procedure, there are only approximately 3,000 hearts available for transplant per year—a number that is far below patients’ needs.

In the last few decades, ventricular assist devices (LVADs), which aid the left side of the heart in pumping blood to the body, have been created and refined. But often, both sides of the heart will fail, and so medical researchers had to think creatively about how to provide for patients.

“This is the Holy Grail of transplants,” Gray said. “How do you develop the total artificial heart?”

Such a device entered into the first stage of development in the late ’90s with funding from the National Institute of Health. It works like the LVAD, which is surgically implanted into the body and pumps on the left ventricle’s half, but the new artificial heart aids the entire heart. Another crucial difference is that the LVAD works in tandem with the heart while the surgery for the artificial heart requires almost the entire heart to be removed.

Patients are eligible for the total replacement only if they have fewer than 30 days to live, and the FDA has been closely monitoring the device’s development and results.

Assistant Professor of Science in Society Mitali Thakor transitioned from discussing the benefits of technological advancement to its negative consequences. Thakor discussed deep fakes, which involves imposing someone’s face over another person’s face in a video or GIF.

However, Thakor took issue with this response, as she believed it came too late and undervalued the problem of deep fakes being used to enable the objectification of women and children.

“Why are we waiting for women to be the canaries in the coal mine?” Thakor asked.

Thakor believes that, beyond identifying deep fakes, the focus should be on consent and attempting to remedy the toxic culture that leads to deep fakes being used for harmful purposes instead of lighthearted combinations of Nicolas Cage and Rick Astley.

Dylan Shumway ’20, who won the 2019 student speaker competition hosted by the event’s organizers, similarly emphasized the importance of empathy in order to improve the way we treat each other. In his talk, Shumway spoke about the value of small moments, rather than big, life-changing moments, in determining the course and meaning of one’s life. Shumway organized his talk into three distinct themes based on three separate stories, all of which demonstrated, in a unique way, the impact of these small moments and interactions.

“I’m here to advocate for these small moments,” he said. “Because I think that they often get neglected. And if we pay attention to them, bear them witness, we can use them to empower those around us.”

One of Shumway’s stories emphasized the value of offering positive feedback or friendship, even in small doses, as a means of changing the perspectives of the people with whom one comes into contact. Shumway explained that a friend of his, whom he called Nell, nearly left Wesleyan due to feelings of extreme isolation. It was a small interaction with the director of a play Nell was working on that changed her mind, leaving her feeling validated and less alone, and ultimately prompting her to stay.

“In that moment, she thought, ‘Maybe this could work,’” Shumway explained. “‘Maybe I can make this place feel like home.’ And she did. She’s still here now, almost a year later, still doing theater, but also doing many other things and engaging with the community where she once felt lost.”

Shumway’s stories built up to a single take-home message: Life is composed of small moments, and one ought to pay attention to them or risk missing deeply valuable experiences.

“Be a witness of those small moments, and an agent of them,” he emphasized. “Let people know they affected you, and try and manifest some kindness in your interactions with people, in small moments, so maybe you can change them too.”

Smiley Poswolsky ’05 similarly focused on the importance of spending time with friends and trying to positively impact the people in your life. He is an expert on millennials in the workplace and had previously given a TEDx Talk about best work practices. His talk this year, however, went against all that advice.

He recommended three distinct shifts in listeners’ mindsets. First, instead of pushing to find a purpose, having patience with themselves and giving themselves time to learn from professional experiences. Second, trying to find friends instead of followers. He used to tell people to build a following for their ideas, but now he believes that it’s more important to spend as much time with friends as possible.

Poswolsky recalled his friendship with Levi Felix, who founded an organization called Camp Grounded, which is a summer camp for adults that provides a digital detox. Poswolsky has worked at several camp sites, and that experience, along with his friendship with Felix, reshaped his beliefs about connection.

“He taught me that the road to connection is paved by getting your dopamine in real life, by spending time with others offline, when no one is watching,” Poswolsky said.

The third shift is focusing on a sense of home instead of hustling and concentrating on planting roots and finding a community instead of constantly being on the go.

“I now have learned that the true purpose of life is not to find your purpose, as so many young people I meet are so obsessed with doing—damn all those millennial self-help authors with cool nicknames,” said Poswolsky, whose real first name is Adam, not Smiley. “The true purpose of life is to be present with the people you love most while you are lucky enough to have them. What matters is not what you’re going to achieve and how fast you’re going to achieve it. What matters is the person sitting next to you.”

Emmy Hughes can be reached at ebhughes@wesleyan.edu, or on Twitter @spacelover20.

Erin Hussey can be reached at ehussey@wesleyan.edu, or on Twitter @e_riss.