Baseball Swings Strong Out of Conference, Falls to Middlebury 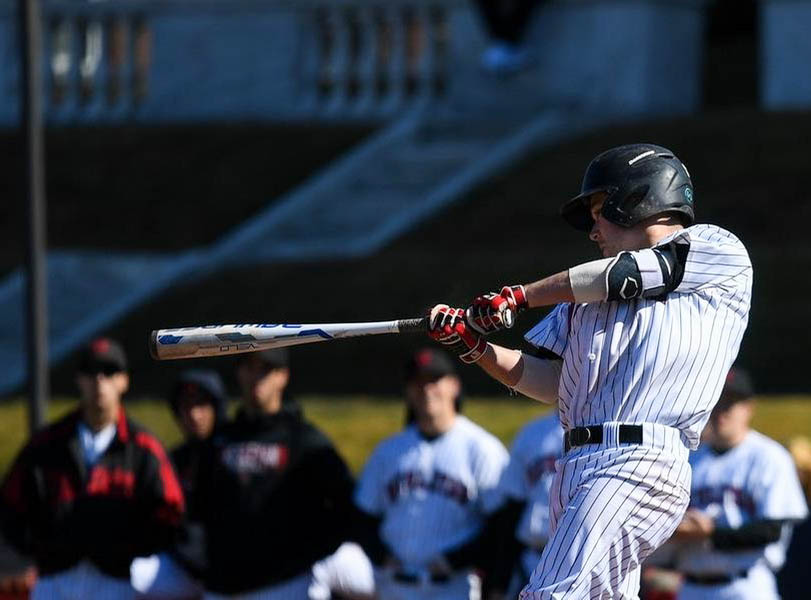 In my last article, I wrote that the Cardinals had a “prove it” week ahead of them, with two midweek games and then a weekend series against Middlebury putting them to the test. The Red and Black answered the call but had some difficulty keeping the momentum going through such a demanding schedule.

Starting with the midweek games on Tuesday the 23rd, Wesleyan squared off against Wheaton College. In the tune-up game, Wesleyan blew through their lineup, using ten pitchers to hold Wheaton to only two runs. Our Cardinals came away victorious, in a close 3-2 game. At the plate, designated hitter Andrew Kauf ’20 plated two runs, giving him 24 RBI on the year. Another bright spot was Adam Geibel ’22, who went one-for-two in two weeks, as he continued to find his way on base. Geibel now has an OBP of .384, outstanding for anyone, let alone a rookie on the team.

The Wheaton game finished the same way many of the Cardinals’ games have ended this year, with Jake Alonzo ’20 getting the save to secure a 3-2 win for Wesleyan. Alonzo’s emergence as a reliever has been massive for the Cardinals this season; his 2.12 ERA has made him a reliable option out of the pen.

“I have settled into the closer role for our team, and I relish the opportunity to make the difference for our team at the end of ball games,” Alonzo said. “It is different from a starter role, as I have to be prepared at all times to come in and pitch. My teammates and coaches trust me and believe in me to get key outs at the end of games, and that goes a long way towards believing in myself. Essentially, knowing that I am the one trusted with the ball in close games to put our team in the best position to win allows me to have a winning mindset on the mound.”

This winning mindset continued into their next midweek game, as the Cardinals faced off against the United States Coast Guard Academy. The Red and Black’s “never quit” attitude kept them above water in the matchup. In a non-conference game, down 4-1, heading into the eighth, many teams would have packed it in; however, that is not how Wesleyan finishes a game. Scoring one in the eighth and two in the ninth, the Cardinals tied the game heading into extra innings. With the momentum now on our side, Wesleyan steamrolled over Coast Guard, blasting five runs in the tenth to deliver a convincing 9-4 victory. Tanner Fulkerson ’20 came off the bench and smashed a two-run dinger in the tenth inning rally to help propel the Cardinals. This game helped set up the weekend series against our NESCAC rivals, the Middlebury Panthers.

The Cardinals kept clear heads entering into the series.

“If we can play with the same looseness and focus that we had earlier this week against Wheaton and Coast Guard we will be able to win,” rookie Geibel said. “We just need to remember to keep playing for one another and the rest will figure itself out.”

These thoughts were echoed by the upperclassman.

“We simply need to play our game,” Alonzo said. “Coach Woodworth talks a lot about the game within the game, that is competing to be your best self. If every person seizes the moment when their opportunity is given this weekend, that will put us in a good spot to be successful. We have proven in spurts that we can beat anyone on any given day, now is the time to do that consistently and finish the season strongly to put ourselves in a good position for the NESCAC playoffs and beyond.”

The Cardinals knew the weight of the series against Middlebury, and now it was time to go out and execute. The first game went exactly as planned. Danny Rose ’19 kicked everything off with a thundering home run in the second inning, however, the story of the day was starter Pat Clare ’19. The senior delivered a masterpiece on the mound, going the full nine innings while striking out nine and giving up only one earned run. Despite three errors, the Cardinals cruised to a 4-2 victory, pushing the Panthers closer to extinction.

However, in the second two games of the series, Middlebury bounced back. In a doubleheader on Sunday the 28th, Middlebury came out ahead of the Cardinals in both games. Both games saw the Cardinals fall behind early, and commit a combined five errors in the field.

The Red and Black will feel as though they let the weekend get away from them. As Alonzo said, this team is capable of beating anyone, and next weekend provides that chance. A grueling five-game weekend to end the regular season, including a three-game set against Williams and two more with Trinity, will keep the Cardinals fighting hard, but they have the talent and skill to come out on top.