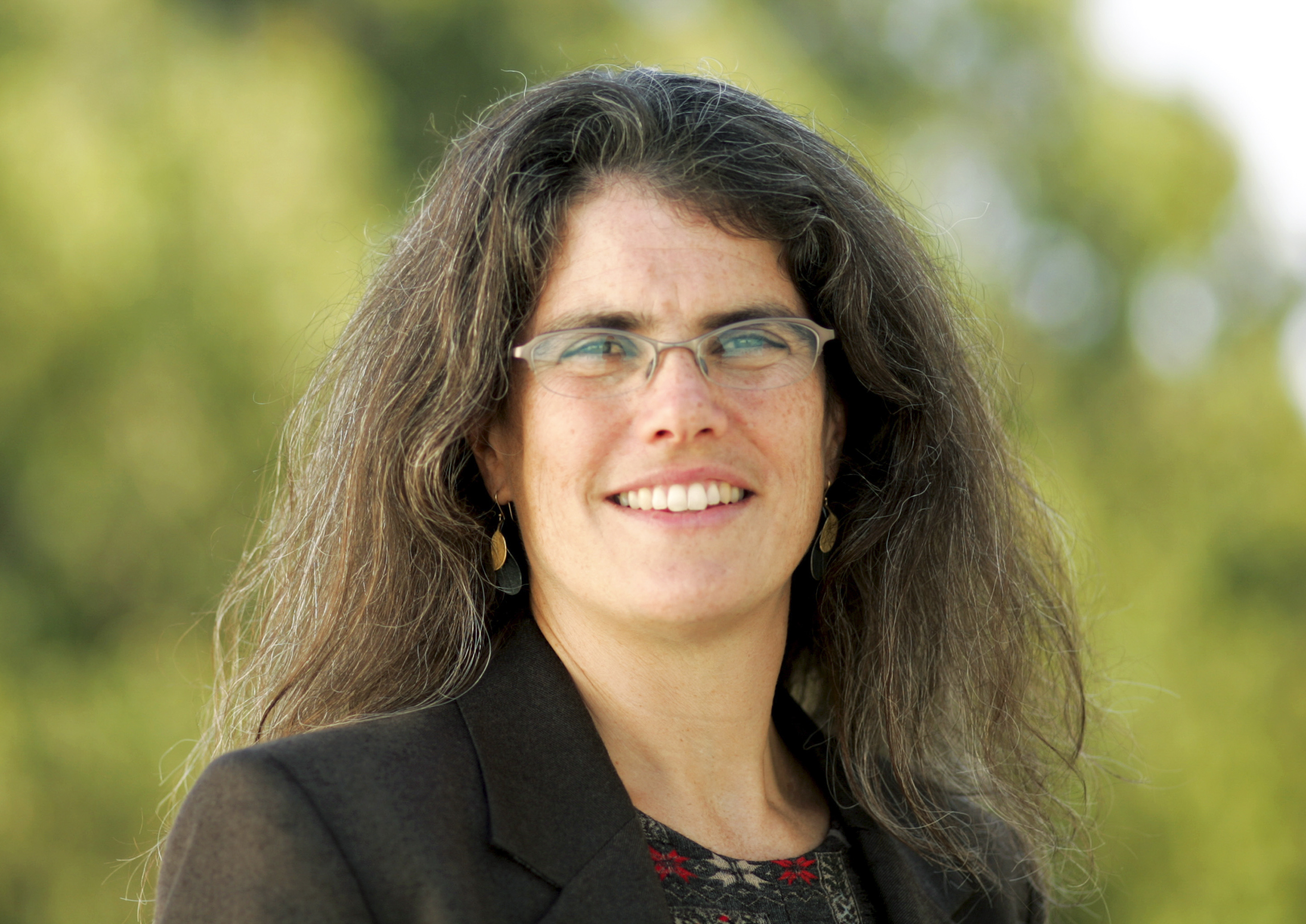 On Tuesday, April 23, Dr. Andrea M. Ghez gave the annual Sturm Memorial Lecture, leaving attendees wondering about what her future research will unveil about the theorized supermassive black hole at the center of our galaxy. The Ring Family Performing Arts Hall was packed with intrigued students, professors, and Middletown residents who wanted to hear about her work.

John Monroe Van Vleck Professor of Astronomy Bill Herbst prefaced Ghez’s presentation with the history of the lecture. As he explained, the Sturm lecture is held in honor of Kenneth E. Sturm ’40, who majored in astronomy as an undergraduate. His sister, Ruth Sturm, who attended Vassar College, donated money to establish a fund for students’ scholarships, and this lecture is now held in her brother’s honor. The event was sponsored by the Astronomy Department, the University Lecture Series, and the College of Integrative Sciences.

Herbst went on to introduce Ghez, recounting awards that she has won over the course of her illustrious career, which include the MacArthur Fellowship. She currently serves as a professor of physics and astronomy and as the astrophysics chair at University of California, Los Angeles (UCLA).

“The story I’d like to tell you this evening is how we’ve been able to discover a supermassive black hole at the center of our own galaxy, and this has provided us with evidence not only with the best evidence today that these exotic objects really do exist, but has given us a wonderful laboratory for understanding how gravity works, how space and time are mixed as you get near these exotic objects, as well as to understand the astrophysics of these objects,” Ghez said. “In other words, what role do black holes play in the formation and evolution of galaxies?”

Ghez began her lecture with the basics of the study of black holes, asking the audience: How do you observe something you cannot see? Black holes, she explained, are objects whose mass are confined to an infinitesimally small volume, making them difficult to conceptualize. Black holes also have a Schwarzschild Radius, popularly known as the event horizon, which is the point at which the black hole’s gravity is so strong that nothing can escape it. It is impossible to see what’s inside this region, Ghez explained, but it is possible to observe what happens outside of it.

“The problem is we don’t know how to make the world of Einstein[’s general relativity theory]…work together with our description of the world at a very, very small scale, which is the world of quantum mechanics,” she said. “So when we can figure out how to make these two fields talk to each other, we will presumably understand what a black hole is. For the moment, however, we get to ignore this little detail that we actually don’t know what a black hole is.”

Her research focuses on the supermassive black hole at the center of our galaxy, the Milky Way. But as she asked at the beginning of her lecture: How can she observe this black hole if it cannot be seen? The approach that she and her fellow researchers have taken is to observe the stars that orbit it.

“I want to prove that there’s a black hole at the center of the galaxy,” Ghez recounted. “The best way to do this is to watch how stars move under the influence of gravity. Stars will orbit whatever’s at their center—the mass that’s at the center—in the same way that planets orbit the sun. So I can weigh the mass of the sun by just measuring how long it takes each planet to go around and how big the orbit is.”

The project began when Ghez proposed trying to observe the theorized supermassive black hole at the center of our galaxy to her higher-ups at UCLA. Her proposal was initially rejected due to concerns that her ideas concerning the imaging interpretations wouldn’t be successful, that they would not be able to see the stars close to the center to the galaxy, and that even if they were able to, they wouldn’t be able to see them move. Ghez proved these doubts wrong by borrowing her colleagues’ time to work with the telescopes and gathering evidence to re-propose her project.

Before observing the stars’ movements, there were two hypotheses about what would be happening closest to the supermassive black hole. First, Ghez explained, it was theorized that the older stars—each around one billion years old—would be most closely orbiting it because they would slowly move toward it over the course of their lifespan. Second, it was theorized that new stars—each around one million years old—would be disrupted during their delicate formation and distorted to the extent that there would be no new stars near supermassive black holes. Both of them turned out to be wrong.

Of the stars that are bright enough to be observed with current technologies, most stars near the mass at the center of the galaxy are young, few stars near it are old, and larger masses, larger than old stars, also closely orbit it. Furthermore, there is a plane that the stars prefer to orbit on when farther from the supermassive black hole, for reasons researchers do not yet understand.

“The objective is no longer to prove that there’s a black hole but rather to use this ability to measure orbits, which is unique within our own galaxy around a black hole, to understand a couple of things,” Ghez said. “The most exciting thing, in recent time, has been to ask, well, how does gravity work near a black hole?”

Ghez and her team observe several stars but focus on the star closest to the mass that they can observe. Over the course of over 20 years, they have monitored its orbit and, in 2018, finally observed one full orbit. With this knowledge, more accurate calculations of the theorized supermassive black hole’s mass can be made. And as an added bonus, Ghez noted, it was the first direct test of Einstein’s theory of general relativity near a supermassive black hole.

There are challenges, however, associated with observing objects that are so far away. Improving the telescope imaging can come from either a software or hardware approach—or both. In other words, researchers can aim to improve their tool and improve their ability to interpret the images that existing tools provide.

Improving the tools simply means building a bigger telescope. The telescopes that Ghez currently use are at the W. M. Keck Observatory in Hawaii, which have primary mirrors that measure 10 meters, among the largest that currently exist. Larger telescopes are advantageous because they can see fainter light and can see finer details.

“If you think about the painting style of pointillism, the one that’s with all the dots, as you get closer and closer to the painting you can actually resolve all those little dots,” Ghez explained. “So that’s what you’re doing with a large telescope, you’re trying to improve your ability to see the little dots associated with the universe.”

The primary barrier to building new telescopes is the huge cost associated with them. A new 30-meter telescope is being constructed on the dormant volcano of Mauna Kea on the island of Hawaii through collaboration by the University of California school system, the California Institute of Technology, Japan, China, India, and Canada, and possibly the National Science Foundation.

The software side has to do with improving researchers’ ability to interpret telescope data. The difficulty associated with interpreting telescope data from Keck is that, when the light coming toward the telescope hits the stratosphere, some of the light is absorbed by suspended particles. Subsequently the pattern discernible by telescopes is warped by the movement of these particles in the atmosphere, like how looking through river on earth distorts the image of the earth beneath it. In order to more clearly interpret the telescopes’ data, researchers must understand the ways in which the light has been distorted, and correct for it.

“You take the twinkle out of the stars,” Ghez joked.

There are two main ways to work around this. Launching a satellite out of atmosphere removes the impact of stratospheric absorption, which is how the Hubble Telescope is able to collect such good imagery—but its primary mirror is only 2.4 meters to Keck’s 10. The more promising route is to shoot multiple lasers into the atmosphere in order to understand the redistribution of light through the stratosphere’s particles.

Currently, the method used is to shoot a single laser up to the stratosphere in order to simulate the redistribution of light through the atmospheric layer. Researchers can then correct for that distribution in order to clarify the data that telescopes receive. But the potential to correct for the light’s redistribution will improve in roughly five years, Ghez estimates, when the facilities to shoot several lasers to the stratosphere at once finish construction.

For now, Ghez and her team will continue to monitor the stars closely orbiting the mass at the center of the galaxy before the new laser-related software and telescope are ready to be operated.

“If nothing else, I hope I’ve convinced you that we have good evidence for a supermassive black hole at the center of our own galaxy,” Ghez concluded. “There’s nothing to fear, because this black hole is very far away, and we will not fall into it…. For the most part, they are not dark and ominous objects. They are exotic and exciting. And there’s lots to be learned about how these black holes affect the evolution of the galaxies that they live in.”