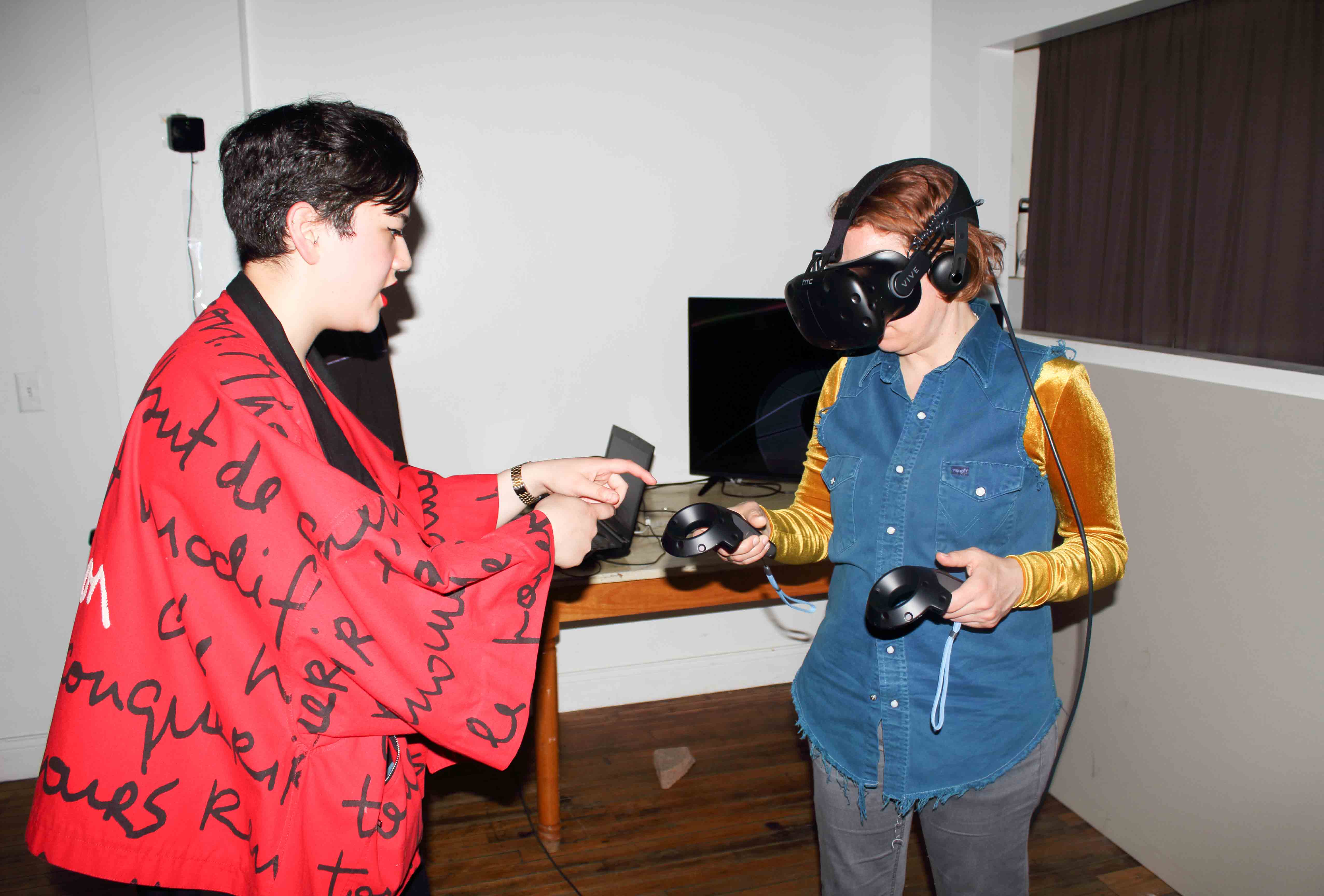 The exhibit “Immersive Imaginary,” organized by Immersive Media Group (IMG) founder Aïli Arakida ’19 and IMG Director of Communications Will Li ’19, opened at MAC650 Gallery on Main Street this past Friday night. The exhibition displayed work by a number of Wesleyan students working across mediums, with a program on Friday night that included a live performance by May Klug ’19 as well as a workshop by Glenn Cantave ’15, a Wesleyan alum and founder of the non-profit Movers & Shakers NYC, which uses virtual and augmented reality for activism campaigns. Over 100 students and Middletown residents attended the opening and workshop.

“Immersive Imaginary” encompassed both pieces that used virtual reality and other technological forms and pieces that were not necessarily technology-based but that explored related ideas of envisioning new ways of interacting with artwork or various artistic forms.

“When I wanted to start Immersive Media Group last summer, an exhibition was always part of my vision for why I wanted to make the group—to have some kind of event that was really multimedia and immersive and collaborative and huge in this kind of way with projections and VR.” Arakida said. “We started in the fall. I just sent an email to a bunch of people, and we met up in my living room and we just had conversations.”

Li was not at the group’s initial meeting but got involved in IMG after seeing a call for a UX designer that Arakida posted in the University’s WesAdmits Facebook group.

“I’m actually a bio and SISP [Science in Society Program] double major, and I just recently got into design, and was looking up design occupations, and UX design was something I really liked,” Li said. “It is basically re-designing digital interfaces and making them user-friendly, [meaning] you talk to a bunch of people beforehand.”

Last semester, IMG attended a hackathon at Wellesley, at which Arakida and Li’s group won several Oculus Go VR headsets. In addition to working on a number of augmented reality projects, they ran several workshops related to the software program Processing, website development for portfolios and other skill-based workshops geared towards programmers who wanted to be doing creative work, as well as artists who hoped to gain technical skills.

Cantave began the Friday workshop by giving an overview of some of the work that he was doing and then gave the circle of attendees the opportunity to offer feedback on the project, which was an educational app that rewarded correct answers through a narrative involving virtual AR historical characters. 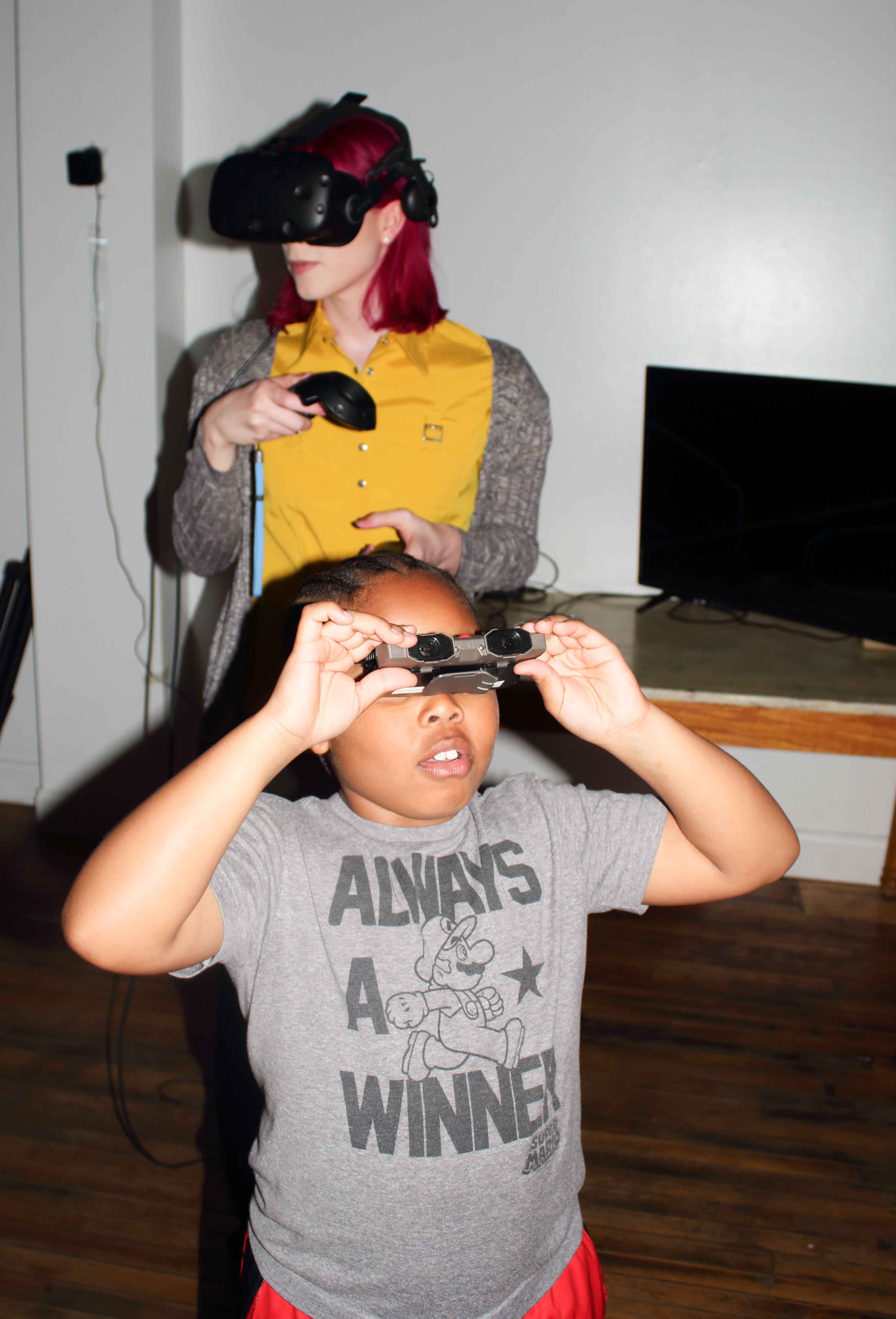 “It’s not often that you get lecturers coming in and asking students, especially, ‘Hey, this is my work. I’m really open to feedback, be honest about this,’” Li said.

Cantave then had participants split into groups and complete a brief entrepreneurial exercise in which they had to consider various problems and think through what platform might best address them.

“I wanted to bring [Cantave] here for a lot of reasons, but one of them was that Wesleyan doesn’t necessarily foster a lot of tools for artists and programmers or developers to understand how they can use their skills for social justice and for activism,” Arakida said. “His work is cool not just because its augmented reality, but because it’s augmented reality with a purpose that is far beyond marketing, which is pretty uncommon. A lot of companies are taking over AR in a way that really overshadows people like Glenn.”

The exhibit included several pieces that were Processing sketches. Adrianna Brown ’20’s untitled piece is an interactive piece that was inspired by painter and color field theorist Josef Alber’s theories on color interaction. Participants can use simple key commands to create and move rectangles of various sizes and colors, creating a playful and thoughtful expansion of Albers’ work into a digital context. Emma Freeman ’19’s piece “Meta” is also a Processing sketch, one which allows the participant to create blobs of varying sizes and to randomize the color scheme to create scenes that appear almost like scientific or microscopic photographs.

Sam Leter ’21’s piece was participatory in a very different way. “Screensavers” instructs the participant to lie down on a makeshift cot, with their head inside of a tiny theater of sorts, in which they can watch an iPhone video. The video itself depicts people looking at their phones as part of their bedtime routine. “Saving screens from extinguishing in the darkness, we become screen savers—a manifestation of inactive sleep,” reads Leter’s program note. Alli Fam ’19’s piece “Podcast Playground” also physically implicated the viewer. It featured several podcast episodes that viewers listened to while interacting with intricate wooden sculptures in ways that corresponded with the themes of the episodes.

Arguably the highlight of the exhibition, “SoundStoneVR,” was directed by Arakida, with John Whangbo ’20 as technical lead, Adam Munawar Rahman ’20 as developer and Eric Roe ’21 as artist. Arakida noted that one of her main goals for the piece was to create a composing workflow for spatial audio in Roomscale VR. 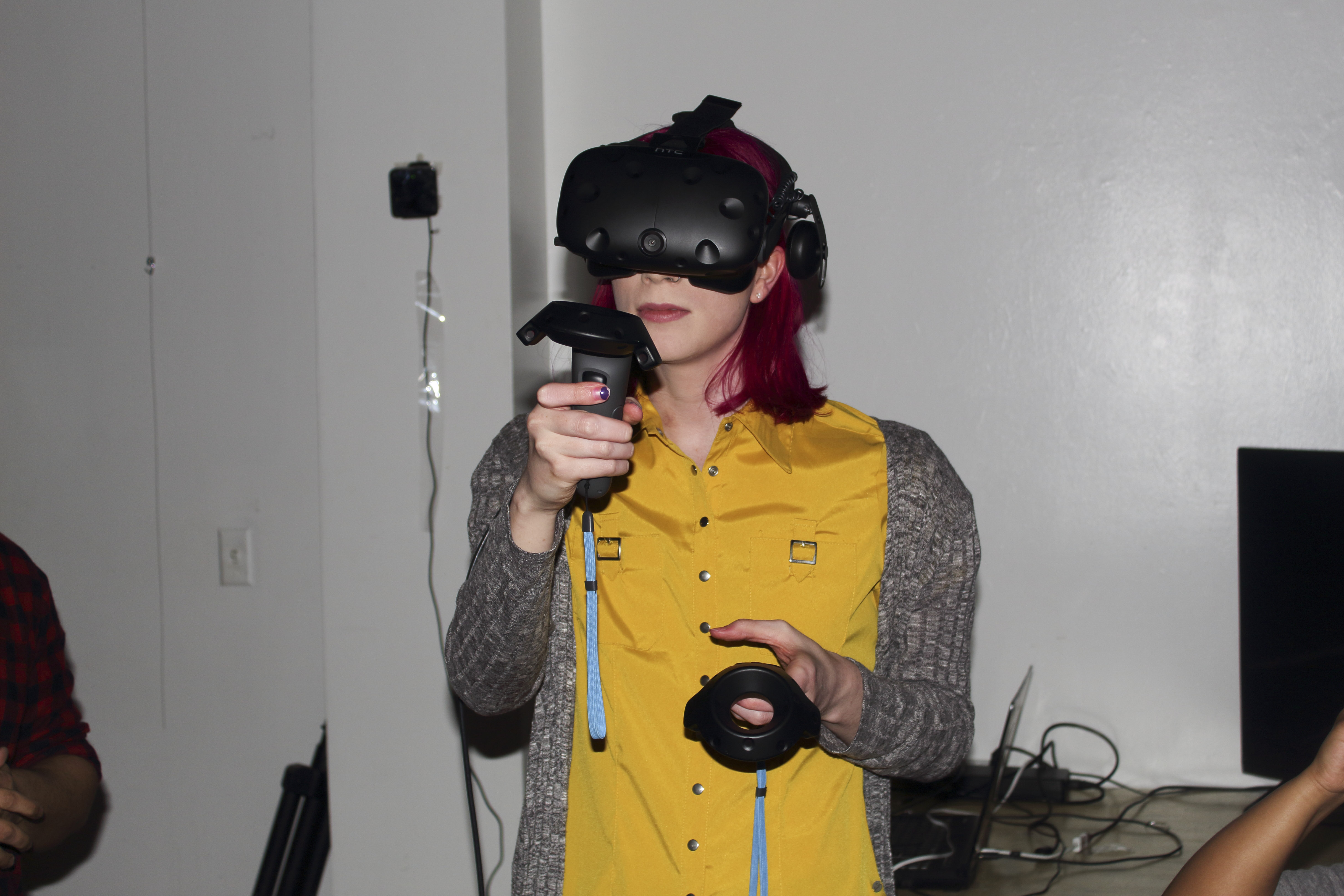 “So within VR, depending on the technologies you have, there’s Roomscale, where you can really use the controllers and walk around, and all of that is sensed and reacted to in real time,” Arakida said. “This is as opposed to the Oculus Gos that we won with the hackathon, which have a limited amount of reaction, [and] are a lean-back experience. You can still use your controller to sort of walk around [with the Oculus Gos], but Roomscale has a lot more possibilities.”

The piece was created over the course of six weeks and was intended as a spatial composition tool. Participants use headphones and controllers to draw paths through space while creating audio loops that can be accumulated or deleted. The paths can then be moved up and down, so that the participant’s positionality to the audio is altered.

“As an audio person, VR was just so interesting to me, because you can work with space, and there are all these really interesting challenges to simulating directionality in 360.” Arakida said. “So one of the reasons why it’s really important for VR is you can’t see in 360 degrees of positionality, but you can hear with a great deal of precision where things are. So a lot of your experience in understanding the physicality of the world and where things are happening is through your auditory senses.”

“Immersive Imaginary” will be at MAC650 Gallery through Wednesday, April 24. The gallery is open from 5 p.m. to 9 p.m.