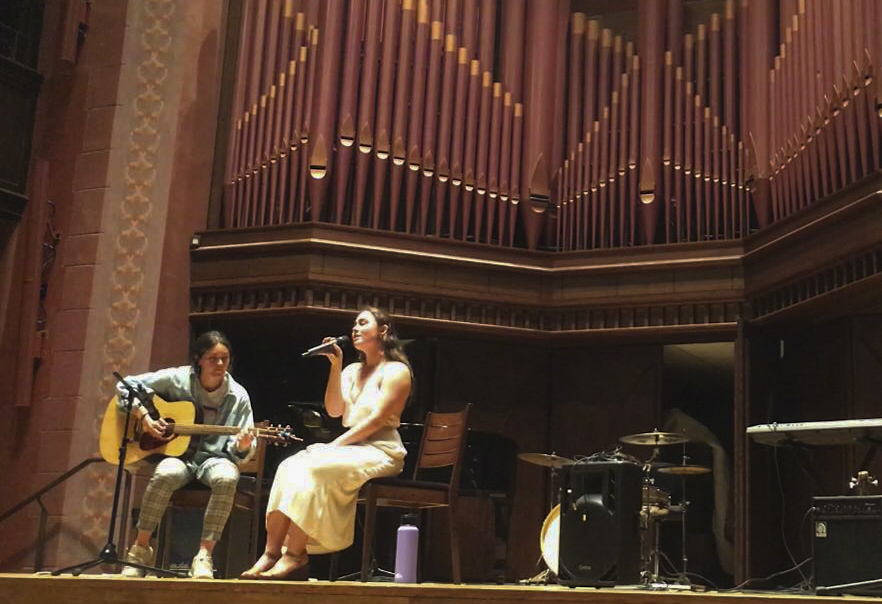 Chiu’s recital, which consisted primarily of instrumental pieces, demonstrated his skill on both the piano and violin. Chiu played both classical Western pieces, such as Bach’s Partita No. 2 in D Minor, and Asian compositions such as the Butterfly Lover’s Concerto, written by the Chinese composers He Zhanhao and Chen Gang. This interest in both Asian and Western musical practices—as well as the intersections between them—was emphasized in the recital’s opening number, a rap song written by Chiu and Brian Oh ’19 about traditional musical compositions from a variety of Asian countries.

“The rap was a fun project my friend and I did for an East Asian Music and Modernity class taught by the amazing Professor Zheng,” Chiu explained. “I also learned about pieces such as the Butterfly Lover’s Concerto from that class.”

This rap was not the only piece in the recital that involved collaboration between Chiu and other performers. Several songs, such as Brahms’ Quartet in C Minor and Shostakovich’s Duet for Two Violins and Piano, were written for multiple instruments, and Chiu consciously chose not to play only solo pieces.

“I saw this recital as an opportunity to work with others as well as put people who may never meet each other together in a group,” Chiu said. “That’s why I chose the Brahms quartet and the Shostakovich trio.”

Chiu also performed a second original composition, a serial piece called “Hear This Gene.” The piece, which bore little representation to the more traditional music that preceded it, was created as a kind of musical representation of a biological protein.

“Though I am passionate about music, I am also quite passionate about research and biochemistry,” Chiu said, explaining the inspiration behind the piece. “I always try to find ways to incorporate music and science together…. In my Post-Tonal Theory class taught by Professor Roger Grant (who is also fantastic), we learned about the composition style of serialism. The concept of this is that you assign each of the 12 pitches to something and you build a matrix out of it.  I chose a protein that I was researching on over the summer (Cdc37) and made a dissonant piece out of it, something that science probably sounds like.”

Like Chiu’s, Sachs’ senior recital combined both original works and covers of existing music, but her recital focused more on showcasing her formidable vocal abilities. Sachs intentionally covered a widely varying set of songs, from Fleetwood Mac’s “Landslide” to H.E.R.’s “As I Am,” as a way to explore and push her own boundaries as a performer.

“I did a mix of covers, original composition and a cappella arrangement because I didn’t want to graduate college before trying to do as many new things as possible,” Sachs said. “Vocal arrangement and composition have both only recently become interests of mine, and I figured if there’s any time to test the waters, why not now? It worked out well thematically too, since the concert was about exploring my voice in as many ways as possible.”

The recital concluded with a song titled “The Second Star,” which Sachs composed herself. The piece was Sachs’ first original composition, and she explained her decision to include it in her performance to The Argus.

“I had written the basic track of my composition this past summer as my audition piece for the Music Theater Workshop class in the fall,” Sachs said. “I decided to orchestrate it and have it close the recital because it felt like a culmination of this confident version of myself that could perform a piece that was 100% [mine]—music, lyrics, orchestration—in front of a bunch of people, and stand tall and proud. That was a wild concept to me, but diving headfirst into orchestration really helped push me to that place.”