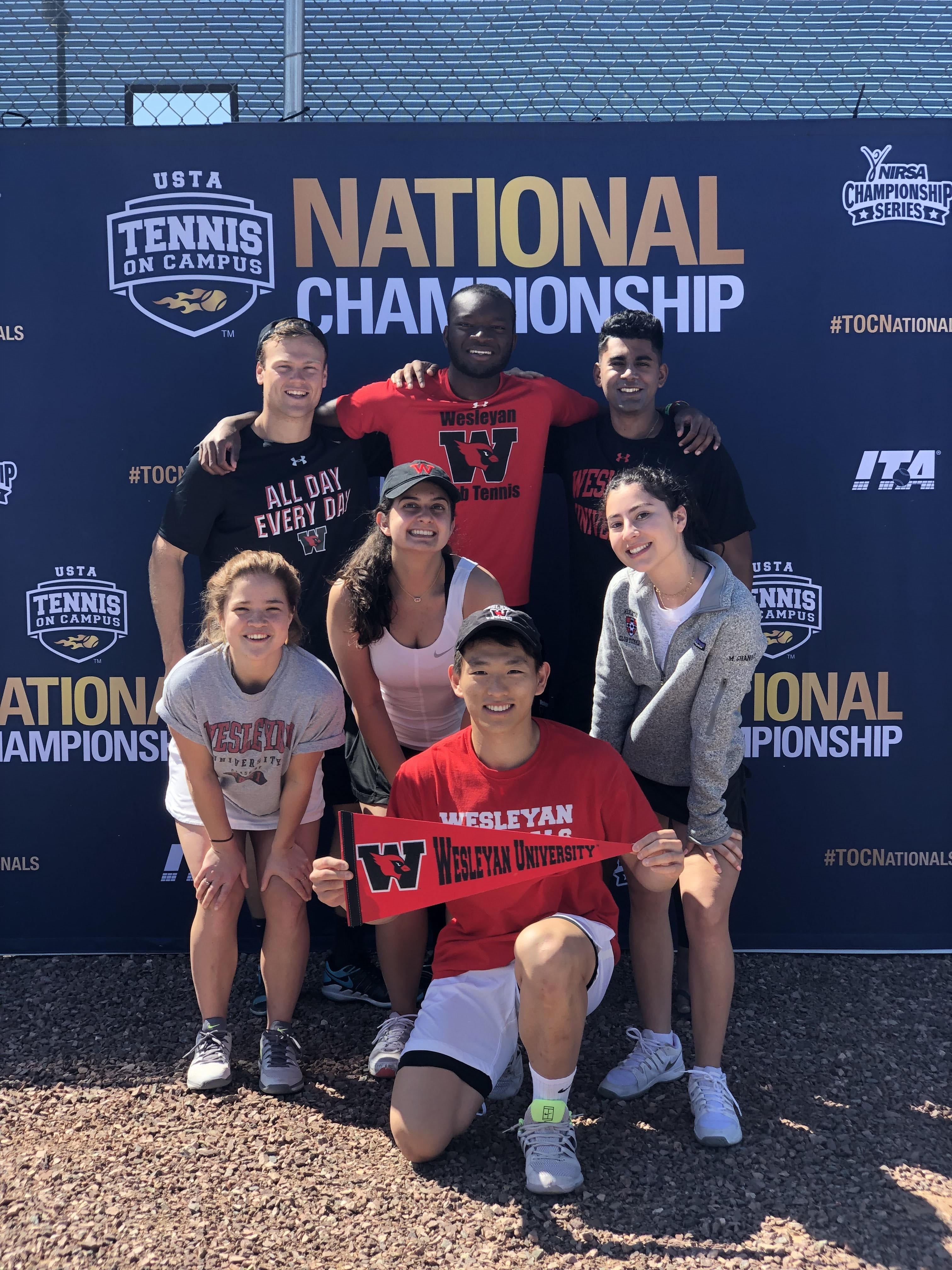 While Wesleyan varsity tennis serves it up on the national stage, club tennis swung this spring at the USTA Tennis On Campus National Championship.

This trip was the club team’s first national berth in its short but eventful five-year history. Founded by Cam Arkin ’18, the team has grown from a small group of dedicated racket-swingers to a large and successful squad. The Cardinals have competed at sectionals for the past few falls, but this year was the first time they advanced to the national competition.

The team trekked to sectionals at Harvard University last October, where they faced off against top schools in a fight for a nationals bid. The first day of sectionals places schools into groups of four, where each school struggles to take the top title of their group. The schools that finish first move onto the aptly named “gold” bracket during the next day of competition. Schools that finish second move to the silver, third to the bronze, and fourth to the copper bracket. The top five finishers of the gold bracket receive automatic bids to nationals.

This year, USTA decided to switch things up and give another bid to the winner of the silver bracket, meaning that eight more schools could compete for a bid on the second day of competition. This year, that included Wesleyan.

Unlike varsity tennis, club tennis scoring is done by games rather than sets; teams’ scores are aggregated from total number of games won. After dominating the first two teams of the day, the Cardinals stood down by four games in a face off against familiar NESCAC-foe Williams. Caroline Bhupathi ’20 and Dhruv Yadav ’19 stepped onto the court for the mixed doubles match, the last of the matches to play out. They needed to either dominate the Ephs 6-2 to claim the victory, or win the match by a close margin and win straight overtime games until they broke the deficit.

Bhupathi and Yadav initially fell 4-2 in the match but picked up their slack and won the next four games to win the set 6-4. Now down 16-18 for the final, the team rallied to win two straight overtime games, settling the score at 18-18. This called for a super tiebreak, which the Birds picked up with a 7-4 victory.

The impressive comeback garnered a silver bracket win and a trip to nationals in Surprise, Ariz.

With sectionals nearly half a year ahead, the team rallied in preparation during the winter months.

“Considering most of the time leading up to the national championship was during the indoor tennis season, we had to get crafty,” captain Kofi Ofori-Darko ’20 said. “We were allotted one practice slot on Wednesday mornings but had to find other times where a couple people could hit at a time so it would not be considered a ‘practice.’ As we got closer to the tournament, we really stepped up our doubles practice. Considering three of the five sets in World Team Tennis scoring are doubles sets, it was important for us to fine tune that. We cannot expect to pull out matches from great singles play alone.”

As the team is only a club commitment, the Cardinals found it difficult to schedule times when everyone was available and able to play.

Nevertheless, the Cardinals scored in some final grinds before flying from the nest between April 11-13.

The USTA Nationals featured 64 of the country’s top co-ed club and intramural teams, with Wesleyan one of seven teams competing at nationals for its first time. Teams of all divisions competed, ranging from huge, sports-oriented schools with enrollments higher than Wesleyan tuition, to small Division III liberal arts colleges in the middle of Connecticut.

“It was a great opportunity to represent the school among others from D1 programs from the Big 12, SEC, Pac-12, and more,” said Eddie McCann ’19, co-captain of the team. 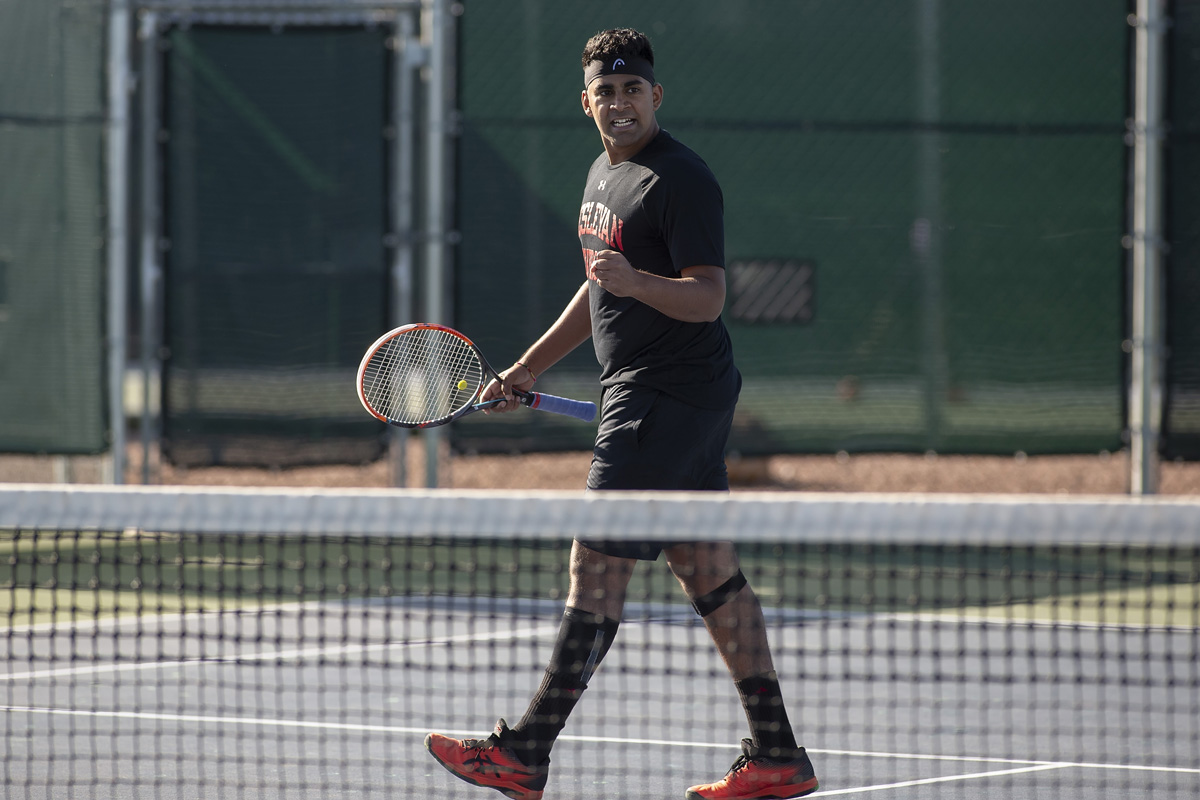 “My favorite part of the tournament was definitely coming out strong against Ohio State,” Ofori-Darko said. “I’m especially proud of our women’s doubles pairing in that match, considering they pulled a great comeback to beat the 2018 champions of the tournament. Everybody played extremely hard and definitely had Ohio State sweating a bit.”

Moving into the silver bracket, the team struggled against Georgia College and Oregon State University, unable to claim a match win for the rest of the tournament.

Despite the final losses, the team has made program history with its nationals trip.

“Nationals has a great balance of competition and a good atmosphere; the teams are there to win but also maintain the fun that is club tennis,” McCann said.

Looking forward, the Cardinals hope to continue their highly competitive play and pick up more wins as the spring season finishes out. They’ll try to repeat history come this fall.

“[We want to] keep up the momentum,” McCann said, keeping his eyes on the final matches of his senior season. “Our first match of nationals was versus Ohio State, defending national champions, a rude awakening to a tournament of this caliber. That said, we competed closely with Ohio State and know that we can play with anyone in the country. Going to nationals and making some noise is the new norm for the program.”

While dominating competition is important to the Cardinals, Bhupathi, a junior co-captain, also hopes the team’s bonding will improve during her final year.

“My personal goal for the team this year would be to focus on team camaraderie,” she said. “You can have a group of amazing players, but it takes a team to get us to the next level.”

Ofori-Darko believes these bonds are crucial to not only team relationships but also the team’s success in competition.

“Looking at some of the best performing teams in the country, we realized that improving our team dynamics is going to be essential in building the team up moving forward,” he said. “It’s only up from here.”