After seniors popped the champagne on the steps of Olin this Tuesday, they finally had time to answer some questions about their theses. We sat down with three seniors from different departments to chat about and congratulate them on their hard work. 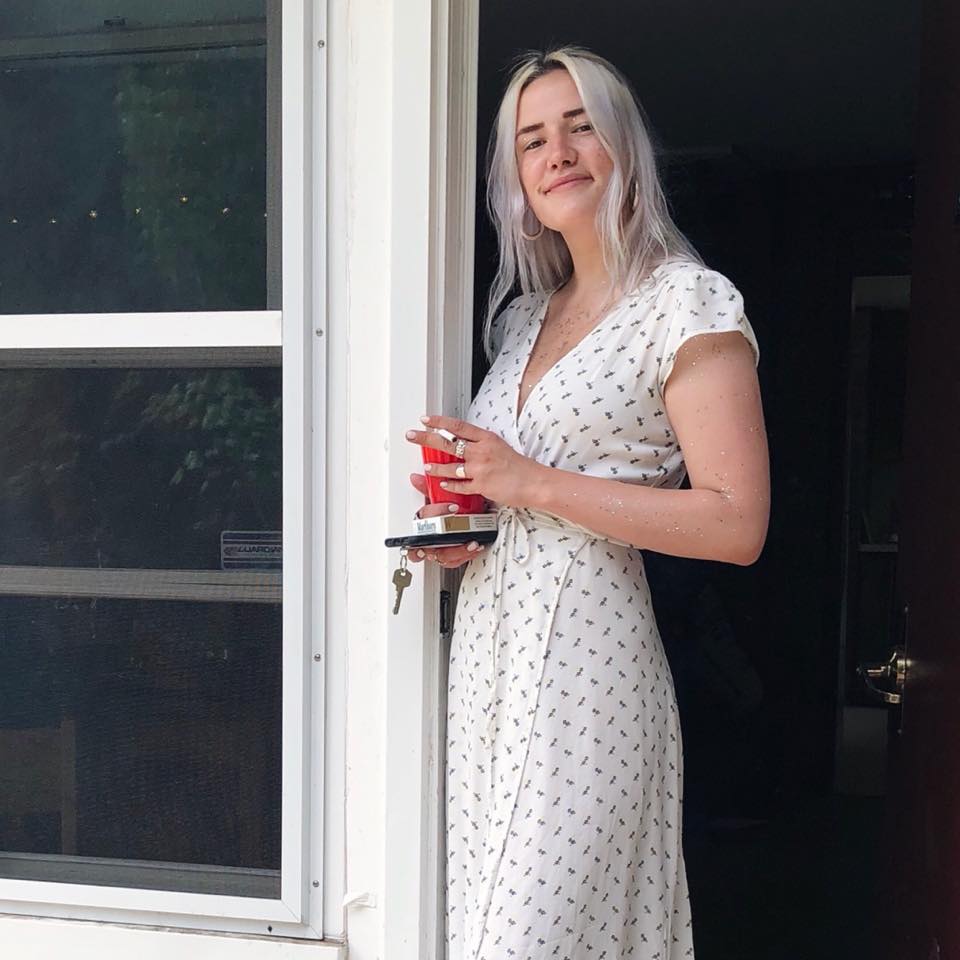 Emily Steckhan ’19 wrote her history thesis about female Nazi doctors who killed disabled children. She wrote with a focus on humanizing these women in order to assert their culpability. The Argus sat down with her to discuss her archival research, female perpetrators, and her personal stake in the project.

The Argus: I’m sure you have an elevator pitch for your thesis, what is it? What do you try to hit when you’re telling people about it to start?

Emily Steckhan: I [start] in the Weimar Republic, where women used their feminine qualities to advance as doctors and especially how that continued in Nazi Germany. And what I was trying to prove, in an overarching way, was that some of these women, especially this one woman, has been recognized in the media and she was awful…. She was the one female doctor that was tried in the Nuremberg Doctor Trials, but she only ended up serving barely five years of her twenty-year sentence, and continued practicing as a doctor afterwards.

ES: Yeah, and as a pediatrician, no less. And she was fetishized and sensationalized. I feel like female perpetratorship, in Nazi Germany especially, has been sensationalized, where in this weird anti-feminist/feminist way I was arguing that these women weren’t anomalies, they had the same capacity as men did for violence. At the end of the day, I was trying to push back against this reductive mindset, in a way that benefits perpetrators when people only talk about the Nazis, and that allows the entire German population at the time to hide behind this perpetrator identity, where at the end of the day, they were just individuals, humans who did awful things. By calling them Nazis it is almost dehumanizing, but almost in a way that allows perpetrators to avoid responsibility.

A: To do things like continue practicing as doctors.

ES: To keep practicing! And evade personal guilt. Because they were people. A large goal was trying to show that these women were just humans, and unfortunately their motives behind the the actions the took—the murders they committed of disabled children—were not crazy. They were driven by scientific interests or careerism. And also I wanted to show the continuity between the Weimar and Nazi Germany. I was able to show, again as part of this sensationalization Nazi perpetrator identity, German society was morally deformed for a decade before.

A: What’s your favorite aspect of your finished thesis?

ES: I’m very happy with the way I was able to humanize the doctors I was looking at in a very unnerving and uncomfortable way. And, personally, that is my favorite part, partially because that was what I was very unsatisfied with when I read existing literature. I tried so hard to humanize them.

A: In order to then hold them accountable?

ES: Exactly. I like to think that I managed to do that. I guess that’s more of a humble-brag. [laughs]

A: It’s a question that asks for a humble-brag. What’s your favorite thing you read?

ES: Ok so favorite thing I read…. So I’m German, and that was a very interesting thing to work with, because, for example, no one is telling me where like half my family was during the war. And I’m not about to find out. And it was a weird thing to work with, because obviously I would get very overwhelmed, because it is an intense and dark topic, and I was feeling guilt. Because I’m German, and that was my grandparents. I read this incredible book that my advisor told me to read, which translates to “The Second Guilt,” and it just grapples with being German in the second generation of postwar. That was incredible thing to read because on the one hand it was super validating but it also checked me in a good way. That shaped my approach a lot. 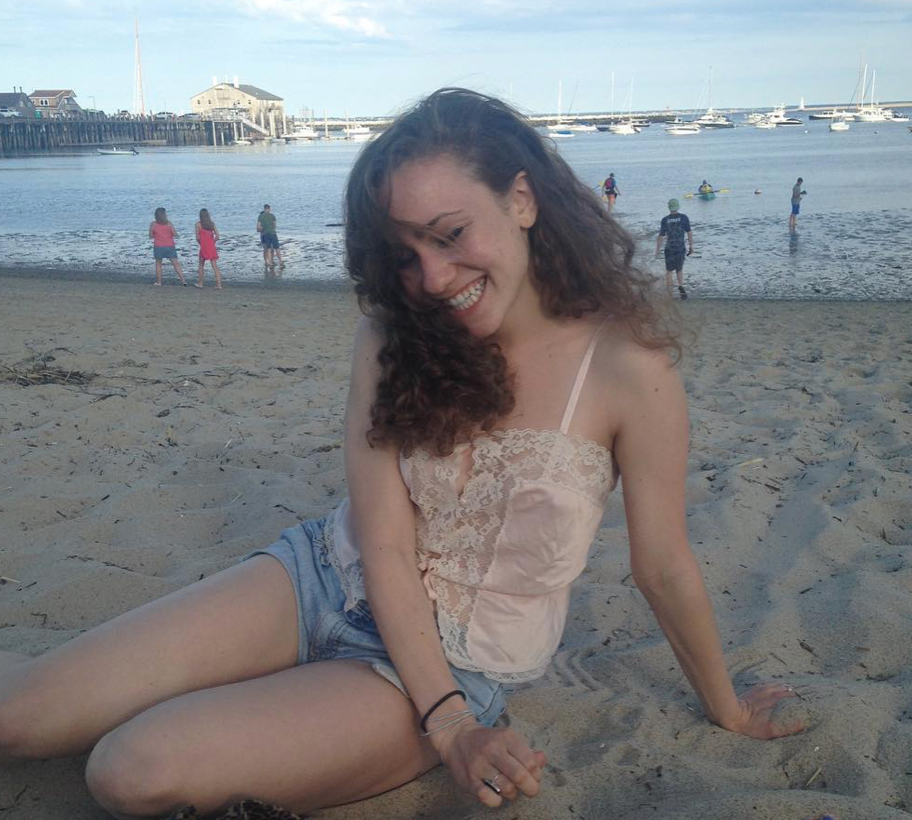 Chiara Bercu ’19 spent her senior year writing a thesis on sugar babies. The Argus talked with her about her research process, the joy of writing, and her completely jargon-free title.

The Argus: I’m sure you have an elevator pitch for your thesis, what do you tell people when they ask about it?

Chiara Bercu: I feel obnoxious because usually it takes me a long time [laughs], but I think the best way to explain it is to say that I’m using the antisocial thesis in queer theory, along with some psychoanalytic theoretical arguments, to entertain the political potential of market relations and impersonality through the image of the sugar baby.

CB: Yeah, I was like let me just squeeze it all into jargon.

A: Into one sentence, no less! Can you tell me about the process of writing and researching it? If you were going to start now, what would you do differently?

CB: I got lucky because I got a grant to work with Greg Goldberg over the summer, who is my fave, my idol. So I was researching for his next book and reading a lot of theory aligned with the antisocial thesis that ended up informing my argument. So I feel like I got a lot done this summer without really meaning to. And that was good, it gave me a head start, I guess.

A: So it sounds like your topic mostly came out of the research you did with this professor, but did it shift at all over time? Or could you pretty much conceptualize where it was going from the beginning?

CB: I recently read this paper that I wrote last spring that was charting some of the preliminary ideas that I had about it, and actually it was pretty similar. It didn’t evolve as much as I would expected. I think my ideas got entrenched by the work I did this summer.

A: What’s your thesis titled, and do you have an alternate title?

CB: My thesis is titled “Sugar Babies: an Antisocial Analysis of Psychic Imperialism and Its Dissolution in Market Exchange.”

A: Jargon free! No jargon in that one.

A: No, no. I feel like if you work on something for that long, you have earned the right to a title like that.

CB: It’s honestly easier to be jargon-y than not…but my alternate title was “Antisocial Sex: Sugar Babies and Market Impersonality” or something like that.

A: What’s your favorite aspect of your finished thesis and, alternatively, what was you favorite thing you read while you were researching?

CB: I got to go back through a lot of anti-essentialist theory from previous classes I’d taken and read it with a new valence, which was cool. I liked revisiting things that had been interesting to me in the past here and thinking about them in light of the argument that I was making.

A: And do you have a favorite chapter or aspect of your thesis now?

CB: I talk a lot about exchange in the last chapter – [Georg] Simmel has this idea of “degrees of freedom,” where the exchange that grants you the most leverage is the one where your obligation is offset by money. I think that’s my favorite chapter. Because I finally have the platform to say what I want to say, and it takes awhile to get there with the earlier arguments. But I’m like: money! It’s good!

A: Anything else you want to say about it?

CB: I really liked [writing a thesis]. I can honestly say I enjoyed the whole process. It feels cool to have been able to have something here that felt really distinctively my own and helped me entrench the ideas that have been the most important to me in what I’ve learned here. And I thought it was going to be more stressful than it was. [laughs] I guess I just enjoyed working on it. 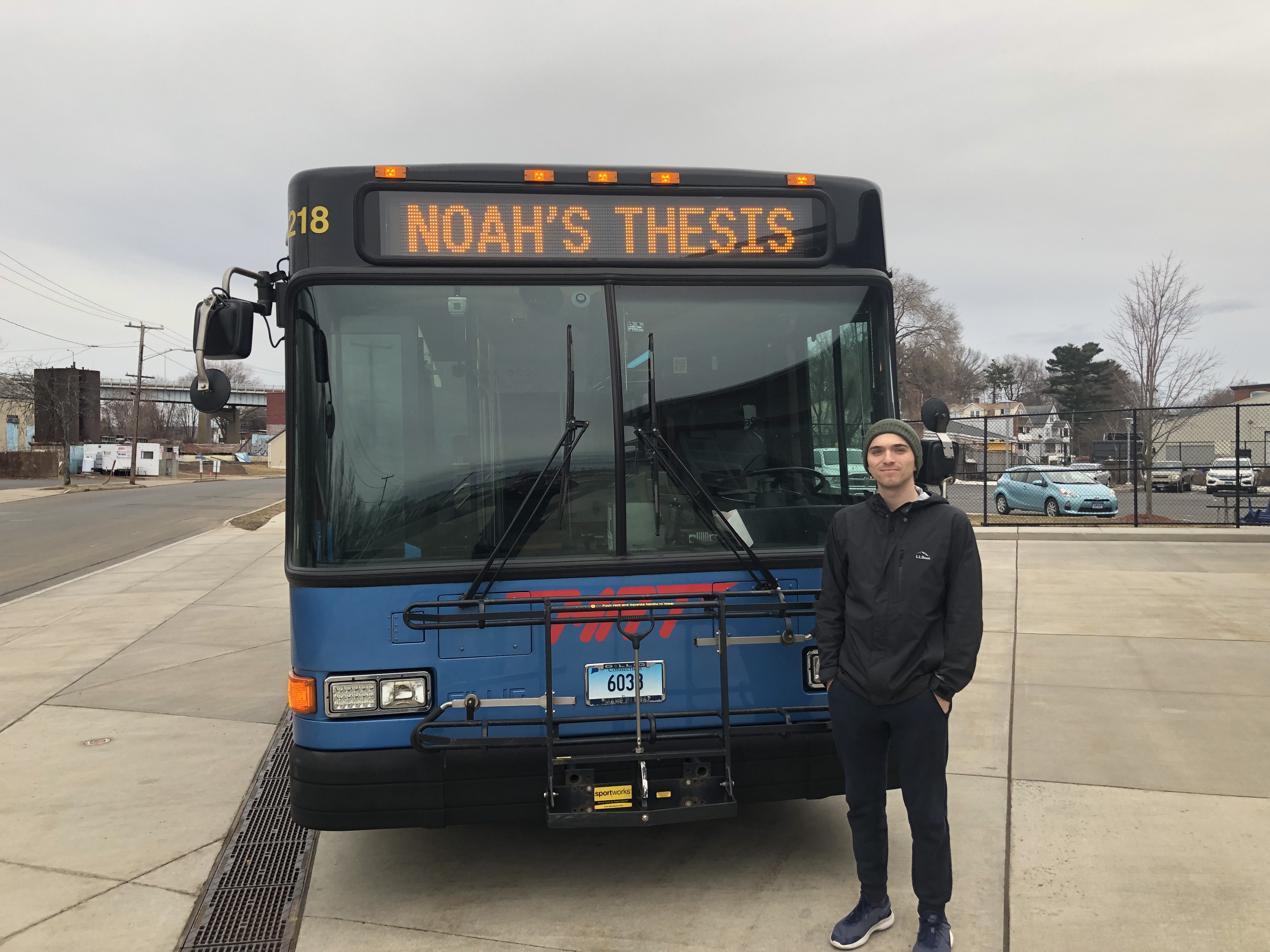 A a history and Environmental Studies double major, Noah Kahan ’19 wrote his thesis about public transit in suburbs, including our favorite suburb of Middletown, Conn. We talked to Kahan about his work with Connect Middletown and the people he has met throughout his research.

The Argus: So what’s the elevator pitch for your thesis?

Noah Kahan: The thesis is basically saying that the lack of public transit in suburban environments is very much overlooked by those who either drive most places or students who don’t really think of public transit as a viable option for getting around. The thesis is pretty much a summation of all of the work I’ve been doing for the past two years with Connect Middletown (CM), [but through] a more academic lens. I talk about Middletown transit in relation to a lot of the literature that I read regarding infrastructural studies. It’s a lot about publics, a lot about these questions of care and maintenance. And I essentially argue that this idea of an enhanced M Link [bus] service that runs express from downtown Middletown to Wesleyan, and to the Meriden Rail Station that if students do want to get out of the region, or if whoever wants to get out of the region, they can do so. It becomes a viable form of public transit that is efficient, that is visible—meaning that people will see that “Oh, this can actually work,” and [is] also relevant to a larger discussion about public transit in these suburban environments.

A: What is CM and how did you get involved with it?

NK: CM was a project started in the late spring of 2017 by Alex Garcia [’17], who graduated. The original idea was to better integrate public transit into the Wesleyan community. When he graduated, I took over and sort of wrote a full report essentially integrating economic, social, and environmental reasons for why an express bus route between Middletown and Meriden is a good thing and would work. And I wrote that over the summer mostly and into the fall of 2017 and throughout the year. Talking with a lot of Wes people, talking with a lot of Middletown people…really trying to get the word out about the importance of public transit.

With this thesis, I was able [to] do an ethnographic study about a lot of the Middletown residents that use public transportation, and also speak with a lot of the Middletown Area Transit (MAT) dispatcher and supervisors. I was really able to take a more holistic approach than what I did with the original CM project because I was just writing it on my own.

NK: Very informal, like conversation. It’s ethnography, but I wouldn’t consider it a formal interview process. What I did was go to the downtown terminal, because I was given access to a lot of the people in the terminal. I would go into the back office and just sit down and see what their jobs are and ask questions, get to know them well and in doing that was able to find a lot of key, rich moments that I could write about. Especially the relationships between the people in the back office and the ridership. And also, the riders themselves. In doing that, I was able to ride the buses a lot to see how the people rode the buses. One really interesting, key point was that a lot of the people who ride the buses, just to ride the buses. Just ride around all day. That’s their form of socialization. There’s not a lot of things that people do–or certain people do, and that was really interesting. It sort of shows how some people just find that as their form of activity.

Madeline Matz can be reached at mmatz@wesleyan.edu.