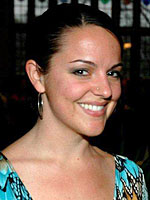 On Monday, April 15, students and faculty gathered in Russell House to attend the annual Jeremy Zwelling Lecture given by Sarah Imhoff, an associate professor in the Department of Religious Studies and the Borns Jewish Program at Indiana University. The talk, titled “Manliness and Its Opposites: A Brief History of American Jewish Gender,” explored the history of Jewish masculinity in the lesser-known Jewish immigration port of Galveston, Texas and how the Eastern European Jews’ immigration was received by acculturated Jews in America. The talk was sponsored by the Center for Jewish Studies and the Religion Department.

Imhoff’s scholarship focuses on religion and the body with a particular interest in sexuality, gender, and American religion. She is the author of “Masculinity and the Making of American Judaism.” Imhoff began the lecture by exploring normative conceptions of gender and its connotations.

“I have realized there is a very strong cultural association of gender with women,” Imhoff noted. “In fact, we have often talked about how this or that culture treats women or how women’s gender roles change over time, but we don’t often talk about cultural expectations of men and how men’s roles change over time. But men have gender too, and masculinity, like femininity, looks different for different cultures and during different times. Masculinity is not a given. It is not carved in stone. It is in fact a product of our culture and we could and can have a masculinity that looks different.”

Imhoff framed her discussion of gender around an examination of a time period that she argues was particularly formative for present conceptualizations of Jewish masculinity.

“While we tend to think of New York as the capital in America of Jewish life, up until the 1930s, Charleston had the largest Jewish community,” Imhoff said. “Especially after 1881, in response to the emergence of organized violence against Jewish communities, many Eastern European Jews began to come to the United States. They would soon outnumber the acculturated Jewish population. From 1881-1924, where the bulk of immigration happened, almost 3 million Jews arrived in the U.S.”

Examining this period of immigration, Imhoff paid particular attention to how the Jewish communities from Eastern Europe were received by acculturated Jews in America.

“The acculturated American Jews had two kind of feelings. On the one hand, they were committed to helping these fellow Jews who had experienced severe anti-Semitism and were seeking a new home in the United States,” Imhoff said. “On the other hand, they were more than a little worried that these new immigrants were poorer, had less secular education, and had weirder religious practices—in their eyes—that might give American Jews a bad name. There was a prevalent fear that maybe these new immigrants would spur anti-Semitism.”

Imhoff observed that such responses were not only heavily charged with anti-Semitic sentiments but heavily gendered as well. Furthermore, Imhoff expressed that this sentiment moved beyond mere paranoia and manifested in pernicious rhetoric.

“‘Filthy, vermin-infested, too lazy to enter into real labor, and too cowardly to face frontier life,’ were descriptions of the Jewish immigrants commonly used by acculturated Jews in America,” Imhoff explained. “This rhetoric is a salient example of the normative gender ideals these acculturated Jews had formed about masculinity and also how they viewed what it meant to be a Jew in America.”

Following an analysis of the gendered undertones of the criticisms expressed by the acculturated Jewish community, Imhoff explored the implications of the direct efforts of the acculturated Jews to distance their religious practices from those of the Jewish immigrants.

“By referring to the faith of the Jewish immigrants as ‘primitive racial traditions’, acculturated Jews put religion squarely in the category of ‘bad religion’, where it failed to embrace the good and masculine attributes of rationality and universalism,” she said. “Jews weren’t doing masculinity right according to this picture, and that means that they also weren’t fit to being Americans.”

Imhoff noted that such an emphasis on masculinity and ideals of Jewish life in America engendered the beginning of immigration programs that would prove to be salient in American Jewish history.

“Acculturated Jews wanted to make sure that Jewish newcomers didn’t reflect poorly on them, so they formed organizations and programs that would help them more closely live up to their ideals of what made up a good American Jew,” said Imhoff.

Imhoff centered in on a particular program, the Galveston Movement, which sought to move Jewish settlement away from the crowds in large cities, as acculturated Jews were concerned that the presence of Eastern European Jews in cities would spark anti-Semitism.

“Operating from 1907 to 1914, the Galveston Movement is a powerful example of an immigration program where acculturated Jews actively sought to shape the gendered image of Jewish men,” Imhoff said. “Not every Jewish man was a potential member for the Galveston Movement. Guidelines sought to exclude those who were deemed too irrational in their religion or whose physique did not align with their ideals of masculinity.”

Given the rhetoric surrounding these immigration programs, Imhoff concluded that the Galveston Movement was ultimately a conversation about masculinity. For example, health screenings conducted by the Galveston Movement, as well as at Ellis Island, were significant in reinforcing gender narratives.

“Reports of a lack of muscular or physical development among Jewish men were used as a basis for evaluation,” Imhoff said. “A nebulous, poorly defined medical category allowed medical examiners to keep Jews out of America on the basis of a lack of muscles. In this way, medical knowledge, which we usually think of as being objective, actually functioned quite ideologically-shaping public conceptions of Jewish men and how well they conformed to ideals of masculinity.”

“The apparent incongruity of the kind of masculinity the acculturated Jews saw in the immigrant Jewish communities in comparison with their own ideals of Jewish masculinity was a driving force in instigating these immigration programs that are etched into American Jewish history,” Imhoff said. “Programs like the Galveston Movement will be remembered as a salient example of how consequential our social and cultural conceptions can truly be.”