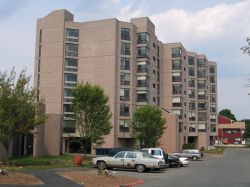 A little after 2 a.m., on Thursday, April 11, the fire alarm in HiRise went off for the twelfth time this year. The Fire Department determined that the alarm had been set off by students lighting incense in their room.

“Before, what was in HiRise were local-only smoke detectors inside the apartments, meaning, when someone triggered it, the only people who would know it was going off are the people living inside the apartment—and probably people close by—but not the Fire Department or us, which could be dangerous, right?” Cruz said in an interview with The Argus. “Now what happens, if there is some kind of smoke in the building, whether it’s from cooking or incense or smoking, if it triggers one of those detectors, then it will send the building into alarm.”

Heat detectors are now installed in each HiRise kitchen and smoke alarms in each bedroom. Cruz suggests that, if students are concerned about setting off the alarms, they should close their bedroom doors, as it’s typically the smoke detector in a nearby bedroom that goes off rather than the heat detector in the kitchen.

“If they shut those doors, and they use their hood fan, they’re less likely to have an alarm activation with cooking,” Cruz said.

The biggest sources of alarms across campus are smoke from cooking, smoking, and burning incense and steam from showers.

Cruz explained that, when students trigger a fire alarm with a cooking mishap, they receive an email with a few recommendations: to clean the stove often and to turn on the stove fan when they cook, for example. After the second cooking activation, they will receive an email with the same advice, but the email will also offer a meeting with Fire Safety to learn more about best safety practices. And, after the third cooking activation, the residents are required to meet with Fire Safety.

“A lot of them are cooking for the first time when they’re stepping into an apartment at Wesleyan, and so they’re testing things and trying things,” Cruz said. “At home, you can produce a lot of smoke without setting off, probably, an alarm, because most people don’t have a monitored alarm system—they just have a smoke alarm and if you blow away the smoke from it, it will stop beeping—whereas we set off a fire alarm and then the only people, by law, who can reset the system is the fire department, so they have to show up.”

Beyond cooking incidents, however, there are a wide range of reasons for fire alarms to be triggered in student residences. Roughly half of fire alarms since the 2016-17 year—355 out of 704—have been activated in wood-frame houses.

“There’s a lot more wood frames, so that’s why the number would be higher,” Cruz explained. “There’s almost 150 houses, so of course you’re going to have more fire alarm systems because there’s more locations. A building, like a Bennet, only has one kitchen, so you’re not going to have as many fire alarm activations unless students are doing stuff in their rooms to create smoke.”

But there are far more reasons than just cooking and smoking for an alarm to go off. Sometimes a contractor will be doing work in a building and set it off, sometimes the system will malfunction and go off on its own, or sometimes a spider will crawl into the detector. In the past, students have pulled a fire alarm in order to make people get out of their house when a party is ending, used a smoke machine inside during a party, put an entire pizza box in the oven and lit the box on fire, and put plastic electric kettles on the stovetop that melt and burn. Students will also occasionally press the “Click to test” button on their carbon monoxide detectors.

“Well, if you test it, it sends the building into alarm,” Cruz laughed. “So that’s happened three times [in 2016-17] when they hit the test button…. Someone used a smoke machine for a party. We don’t allow smoke machines because they 100 percent set off the fire alarm, no matter how much you try not to do it.”

The annual number of alarms activated is fairly constant from year to year, and Cruz says that they are maintaining their current strategy of running fire drills every semester and emailing students best practices after an incident in order to keep students safe.

“I can’t have cooking lessons with every single student, although I’d love to,” Cruz said. “You’re still gonna have those times where you’re just not paying attention, or someone cooked before you and you don’t realize there’s stuff in the drip pan…. I wish I knew how to prevent it more, but we rather that the smoke detector go off and it be something simple than not have it go off, and something major’s happening, and nobody’s there.”

Hannah Reale can be reached at hreale@wesleyan.edu and on Twitter as @HannahEReale.