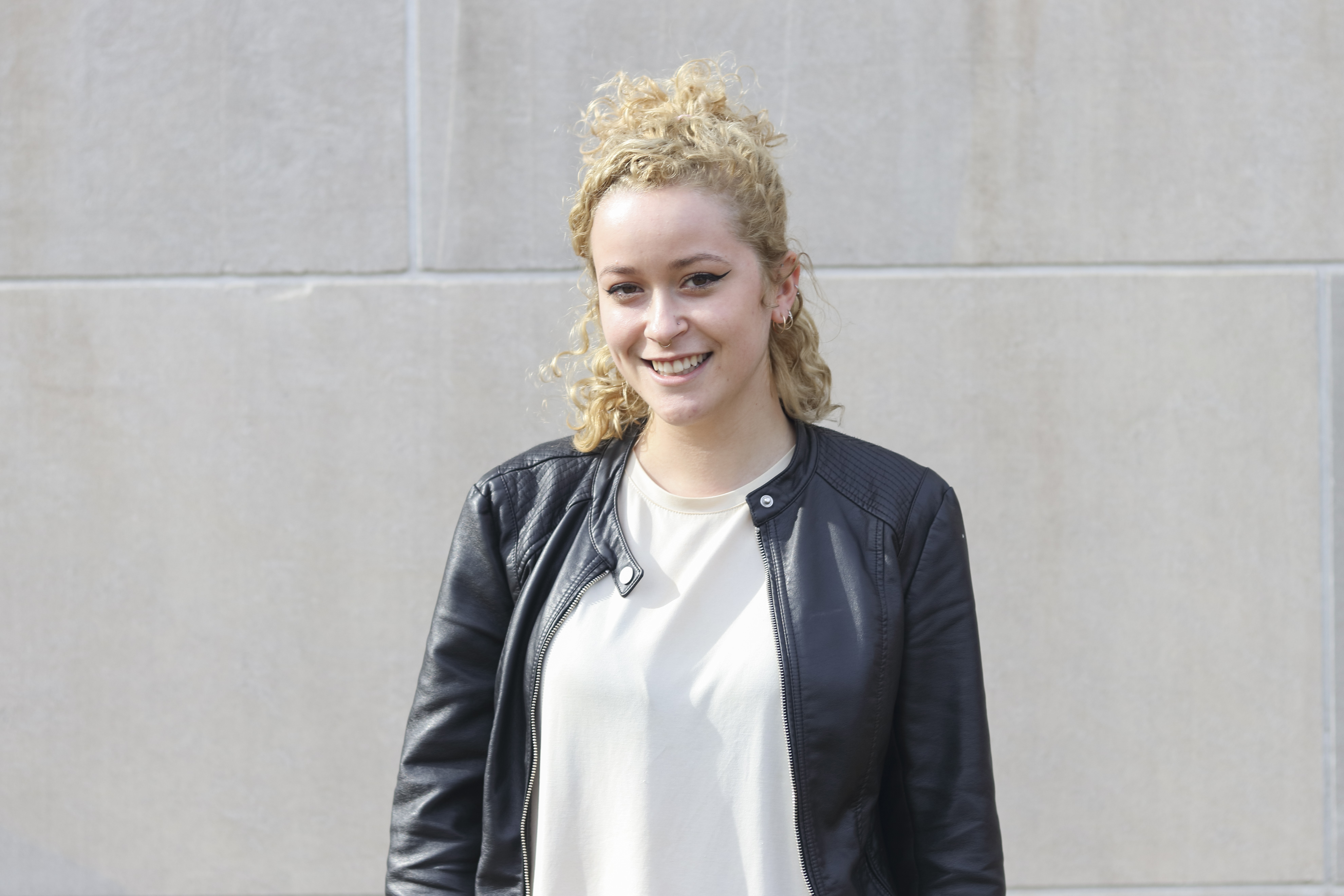 Though you may have seen her performing stand-up with Hysterics, or improvising with New Teen Force, Emma Freeman ’19’s sense of humor extends far beyond just the comedy scene at Wesleyan. As a computer science TA, an amateur video game creator, an artist, and a fixture in the Digital Design Studio, Freeman has made her mark on the Wesleyan community in a variety of ways. As she wraps up her studio art thesis, Freeman sat down with The Argus to chat about her senior year, her future position at Google, and her work as this year’s WesCam wizard.

The Argus: So I’ve heard you’re a computer science and studio art major.

Emma Freeman: And an IDEAS minor! But who’s counting…

A: Did you come to Wesleyan knowing what you wanted to study?

EF: So I thought that I wanted to study neuroscience, and I just didn’t like it. So I took intro programming, and was like “This is cool,” and I also liked art so I just…. It was very straightforward. [Laughs]

A: Did those two interests ever interact at all?

EF: Yeah! So my concentration is digital art, and my thesis is a digital art thing—I’m building a video game. It’s a lot of work, but it’s fun.

A: Tell me about the video game.

A: So it’s more of an art piece in a video game format?

EF: Yeah…which I don’t like saying because it makes me sound pretentious. [Laughs]

A: I’ve heard you’re going to be working at Google?

EF: Yeah! I got a job there after I graduate, which is…bonkers.

A: Wow! How did that happen?

EF: I applied online. And then I had seven interviews! It was wild because I haven’t had a software engineering internship before so I feel like a big fraud but yeah, I’m excited…. I’m doing a resident engineer program, so I’m on contract for a year and they train me for two months, which is crazy, and so nice! And then at the end of the year, they probably hire me unless I’m very bad at my job [knocks on wood].

A: So you’re really involved in the comedy scene on campus. Were you interested in comedy before coming to Wesleyan?

EF: I am a big comedy dork, and my dad got me into stand-up, like watching and listening to stand-up when I was a lot younger, so I started doing stand-up my freshman year because it seemed really cool. Then I signed up for improv my sophomore year and I really love it, and the people who I do it with are some of my greatest friends. We [also] do a queer comedy showcase once in a while and that’s really fun. It’s a stand-up show with all queer performers.

A: What is the stand-up club you’re involved in?

EF: Hysterics is the group that I do standup with. It’s all female, non-binary and non cis-male performers. It was started my freshman year, which is when I joined, and it was started in part in response to the fact that most comedy on campus was super male. It’s way less male now, which is really nice. It’s been a great opportunity to get a lot of people who don’t necessarily have a voice in comedy usually to get their voice heard. We still have a ways to go in terms of improving diversity, definitely. But we were able to raise over $1300 just before spring break for Hartford GYN which is like the last private abortion clinic in Connecticut, and we worked with clinic escorts on that show.

EF: Yeah! We were totally not expecting to raise that much money. Apparently, the clinic director just said “Holy shit!” when she heard how much money we made. So we were psyched.

A: Do you feel like doing comedy has impacted how you present yourself or boosted your confidence?

EF: I hope so! This is a really dorky answer but I think that it helped me a lot with job interviews because I think humor for me is like…a coping mechanism. If I’m able to like make a joke with someone who is interviewing me or who is in a position of power over me, then I’m able to break the ice and feel more confident and comfortable. Also, I think I’m able to stand up for myself a lot more than I would, because again, I’m able to deliver messages with humor! I feel comfortable joking about stuff that might make me uncomfortable and I think that’s a good way to get it out.

A: So I heard you shaved your head a couple of years ago—what inspired that change?

EF: It was definitely something that was noticeable, to say the least. I used to have long hair in my freshman year, and I had a crapola freshman year—

A: Aha! I thought you were talking about a hairstyle!

EF: [laughs] No! I just had a shitty freshman year. And so it was partially symbolic, I guess, and partially just something I thought would be fun to try. And I mean hey, when in liberal arts college, right? And I bleached it yesterday, so obviously I’m not done making impulsive hair decisions.

A: So when you came back your sophomore year with a shaved head?

EF: Yeah, I made the decision over the summer. It was something I’d been thinking about for a while, and then I just woke up and was like “It’s today. Today’s the day.” My friend Matt shaved it, and he also shaved his head. And when I came back I was still really like, Eleven-from-Stranger-Things bald, and people didn’t recognize me! I had a whole conversation with my professor where he just clearly didn’t know who I was. But it’s something I wish more female-identifying people would try, because it’s one of those things that men are able to do at the drop of a hat, and women feel like “Oh, I could never do that!” and it’s like…why not? It’ll be fun. I feel like people would look good but they don’t give themselves enough credit. And when you’re in college it’s pretty low stakes.

EF: Well, I told William [Halliday ’19, editor-in-chief of The Argus] I wanted to be a WesCeleb, I was very direct about that. And he was like, “Oh yeah, we’ve been having a lot of WesCelebs who are just loud and popular, but we’re thinking you were a good person to like counterpoint that!” And then I was like, “Huh..So what am I?” And he was like, “Well you also do stuff!” But I think everyone does stuff. But that’s me! Quiet and unpopular.

A: A perfect headline!

EF: Oh yeah, please put that in there.

A: So what’s your email?

A: Oh wow! So it’s given to a student each year to run?

EF: Yeah. Weirdly it’s the men’s crew team whose had it for a couple years. But there were no comp sci majors on the team [this year], so my friend Theo [Simko ’19], who is on the team, was like “Why don’t you do it?” It’s been weirdly a lot of work, but I’m excited about it.

A: What sort of work do you have to do for that?

EF: Most of the structure is already there, I just have to update it. But it’s a large code base, and I just wasn’t prepared for it. I was like, “It’s a website! I had a Tumblr, I know how to use that.” But it’s just a lot more than I was expecting. But it’ll come out April 8, on my birthday. That’s my flex.

A: Did you plan it that way?

A: Have you changed it at all?

EF: The only thing that I updated is that I changed it slightly so that you have to agree not to harass people, which is something that was in the terms and conditions, but nobody would read it. So now I made it so that when you sign up, you have to say, “I won’t use this to harass people or violate a no-contact order.” Which I did because I had an icky experience over WesCam. Because it’s an anonymous messaging platform! It’s crazy that it’s just like a free-for-all. I’m also the first lady-coder to work on it, I think. So I’m hoping just to make it a potentially more safe platform. So that was my only thing. I wish I could have added more. Someone asked me about group WesCam, and I was like, “For sure, for sure! As soon as I finish my thesis I will get right on that.” Tsk. Sinful activities that I do not condone!

A: Do you feel ready to graduate?

EF: Uhhh…yeah. I’m going to miss the people here so much, and I have professors here who I adore—I guess professors are people—but there’s something about going into a Fountain party, or if you go to Art House as a senior, you’re like “Oh my god. I’m 200 years old and I need to leave.” It’s crazy how being a senior makes you feel old. Which it’s good. I’m glad that I’m ready to graduate and I’m not like, “No I want to stay!” I love it but I’m done.

A: What advice would you give to future Wesleyan students?

EF: This is the one question that I thought about before! I think that I came into freshman year…again, I was unprepared, and I was like “I’m going to ease into it and just start adding things that I’m interested in as I go.” Then my sophomore year I decided, “Okay, I’m going to make some changes. I’m going to get really involved in activities.” And I started doing so many things! TAing, I got a job at Olin, and I lived in Open House, took extra classes, signed up for improv…. I just went whole hog, because I was like, “I’m going to figure out what I like to do, and then start eliminating.” And that was a much better strategy for me. At times I was spread too thin, but I preferred that to having all this downtime where I didn’t know what I was doing. So that would be my advice. Get over-involved, and you can always scale back if you need to!