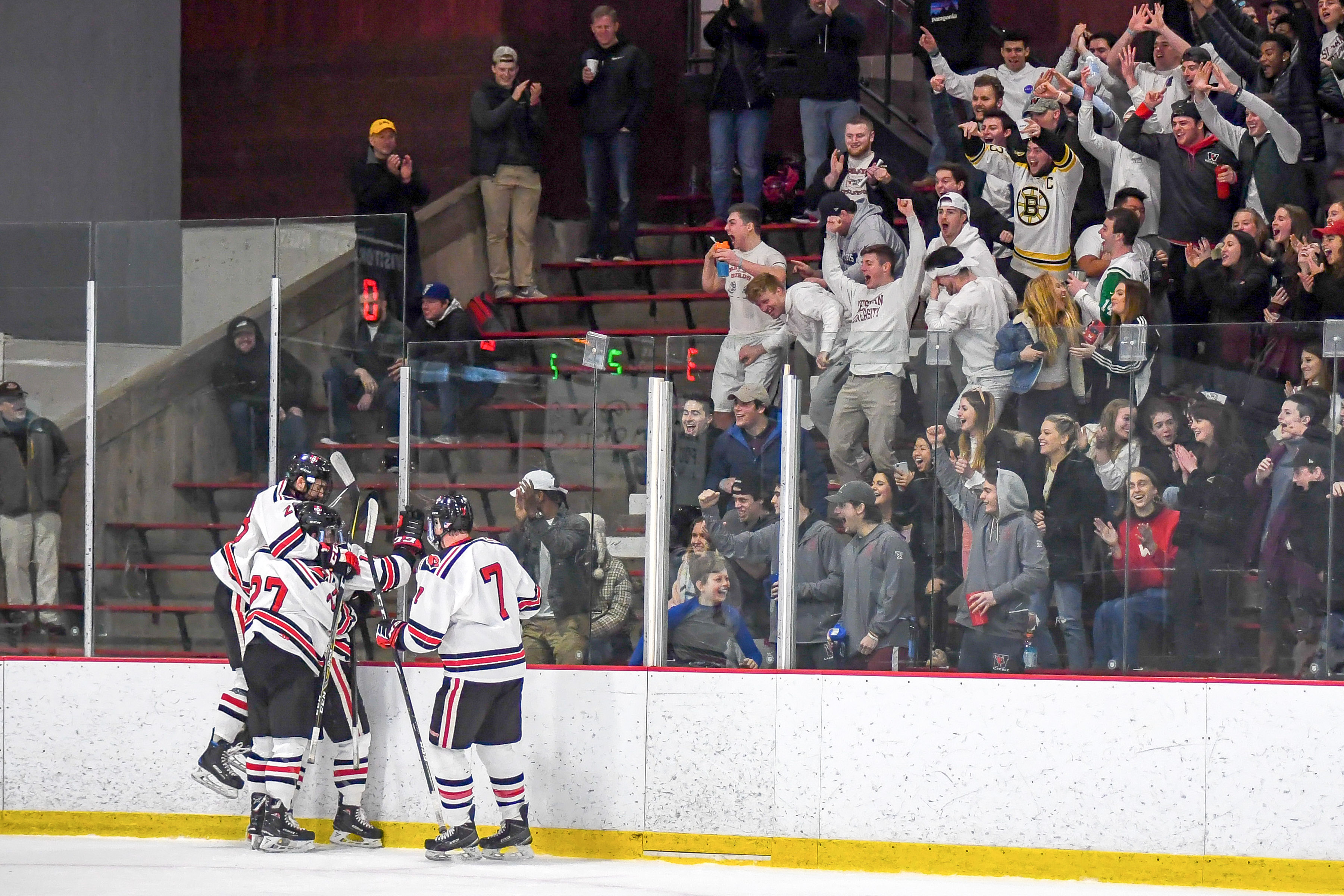 After a historic regular season, the men’s hockey team’s 2018-19 run came to an end with a heartbreaking defeat at the hands of Amherst. The NESCAC semifinal matchup was competitive, with no goals on either side of the puck until double overtime. This 1-0 defeat puts the team’s final record at 16-8-2.

Before this fall, the Cardinals advanced to the NESCAC semifinals with a victory against Middlebury in the quarterfinals, playing in front of a boisterous home crowd. Four different Cardinals scored goals in the game, and NESCAC Player of the Year Tim Sestak ’20 made 30 saves on 31 shots as the Cards cruised to the win.

However, in the game against Amherst, the offense had a much tougher time getting opportunities, as the Cardinals only ended up taking 39 shots in the nearly five periods of hockey played. On the defensive side of the puck, Sestak was stellar as he made a NESCAC record 65 saves on 66 shots in the game.

Despite the tough loss, captain Chad Malinowski ’19 was pleased with the team’s effort in their final game of the season and his final hockey game at Wesleyan.

“The team played hard and left everything on the ice in both games,” Malinowski said. “We gave each other our best efforts and played well. Although we came up short, I am extremely proud of the effort and sacrifice of this group.”

Even with all the success that the team had this year, Malinowski says the loss remains painful even two days later and will likely remain painful for a long time.

“As with most of the other guys, the loss still hurts. We were expecting and working for more and aren’t satisfied with how it ended,” Malinowski said. “We had a great season, historic in many respects, but I’m still not really ready to look at the season as a whole.”

Despite feeling the pain of defeat, Malinowski noted that the program has a bright future ahead. He believes the team has more to look forward to next year after this season’s success.

“The program has come so far in my four years here,” he said. “In those four years, us and Trinity were the only teams to make it to three semi-finals. Before these last three years, the program had only been to one semi-final. While these are great accomplishments, as a program, we are still searching for our first championship. Next year, they return a lot of very talented pieces and are poised to make another run.”

Things are looking up for the Cardinals despite the tough ending, and it will be fun to see if they can achieve even more history again next season. 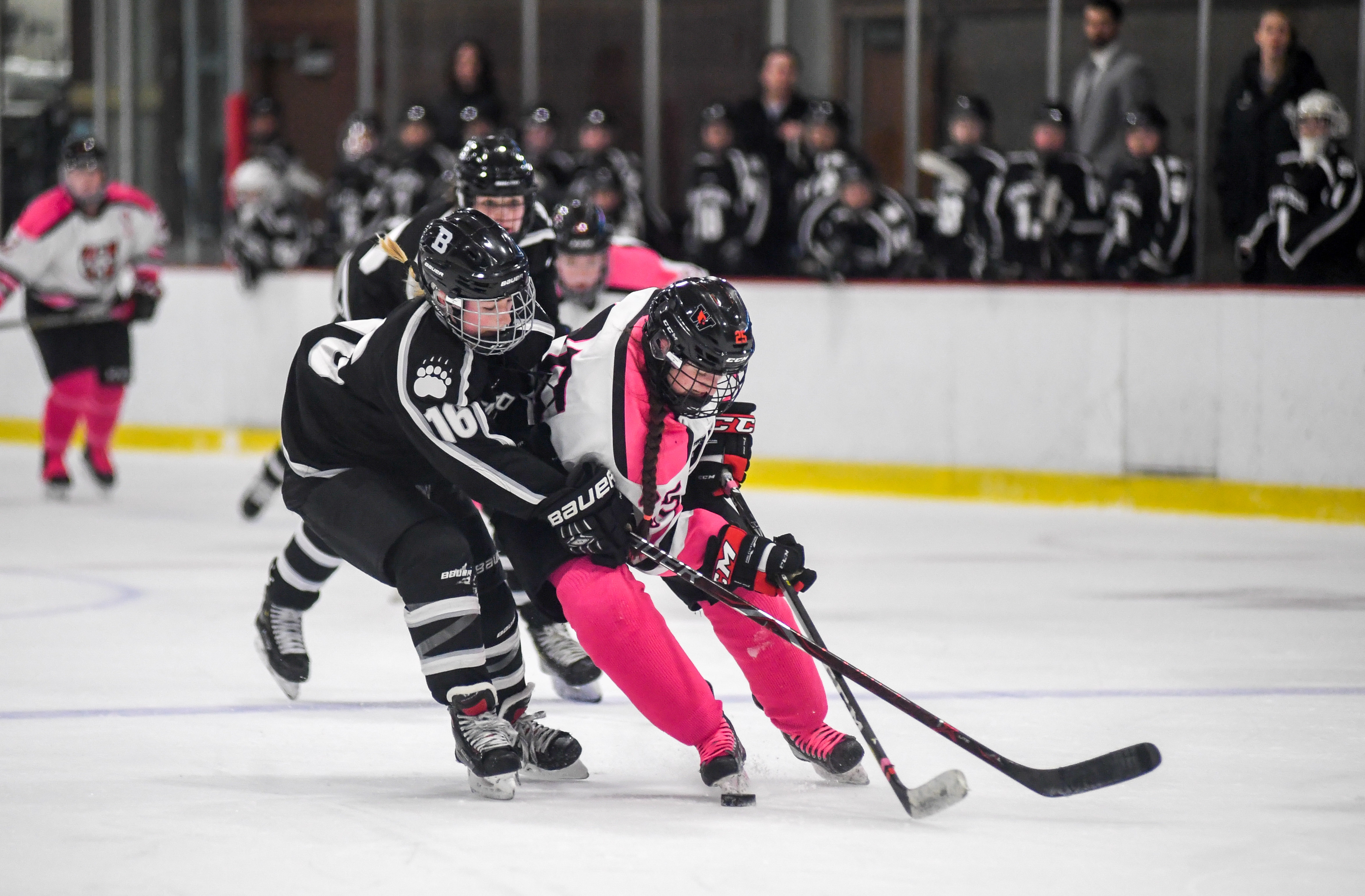 The women’s hockey season came to an end with a loss to Williams in the NESCAC quarterfinals last Saturday, Feb. 23. The Ephs took a two-goal lead early in the game. First, the enemy snuck one victorious shot past goalie Allegra Grant ’20 at the nine-minute mark. Next, NESCAC Player of the Year Meghan Halloran exploited a 5-3 advantage, pushing Williams ahead 2-0 with five minutes remaining in the first period. With ten seconds before intermission, first-year forward Cali Stevens had her shot knocked aside by the Purple Cows’ goalkeeper.

Williams lept out of the break with yet another score, taking a decisive 3-0 lead that would prove to be the final margin for the day. Although provided with two power plays in the final 22 minutes of play, Williams’ effective penalty kill shut down any hopes of a late Cardinal comeback. Grant made 21 saves in the loss, while Stevens led the Cards in shots on goal with four total. Williams goalie Chloe Heiting made 19 saves, recording her fifth shutout of the season. The Ephs, with a 18-4-3 record, advanced to the NESCAC semifinals, where they subsequently defeated Middlebury, 3-2.

The loss leaves the Cards with a final record of 8-15-2, which is an improvement of just two wins from last year’s season. This progress was especially evident on the ice, as Wesleyan took wins over ranked teams such as Middlebury for the first time in program history. Although successful in out-of-conference play, with solid wins early against Salve Regina University and the University of Massachusetts Boston, they only finished 4-12-1 in conference play, struggling against Amherst, Colby, and Conn. College. Hopefully, they will be able to build off of these wins and be even more successful in NESCAC play next year.