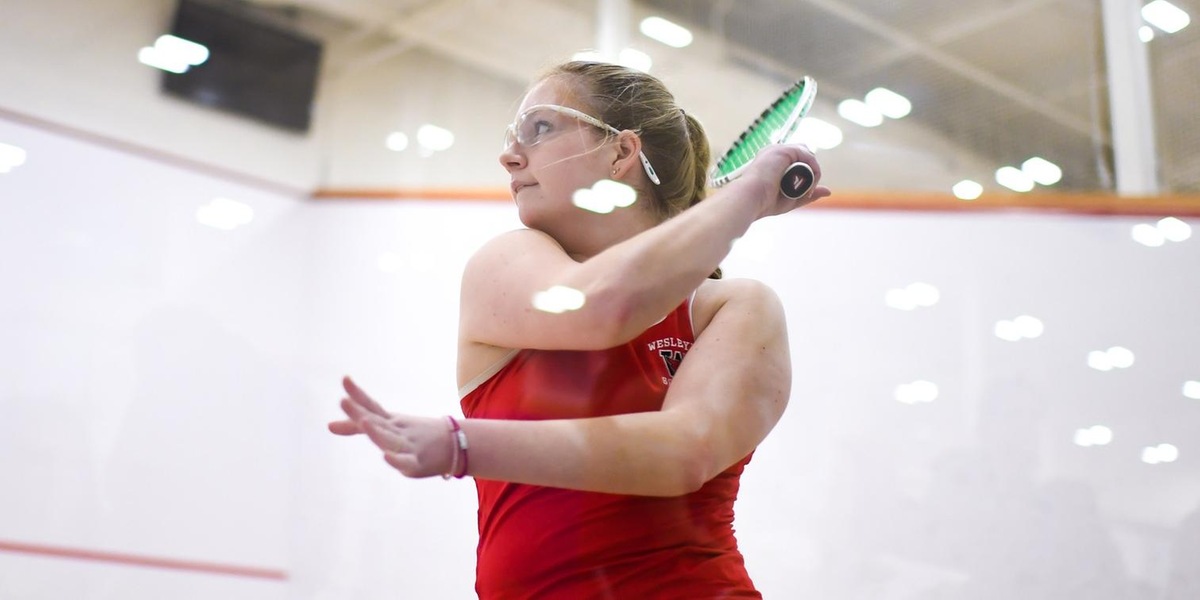 This past weekend, our fearless women’s squash team participated in the College Squash Association Women’s Team National Championships tournament. Entering the weekend, the Cardinals were the No. 23 team in the country and the No. 7 seed in the tournament. However, by the time the weekend ended, the Red and Black had rocketed up the national rankings.

First, the Cardinals faced a tough matchup against No. 19, Dickinson College. Unfortunately, the Cardinals fell to the Red Devils 8-1 on Friday night. The team fought hard throughout the evening, with Natasha Feenstra ’21 winning the only match for Wesleyan from the fifth spot in the ladder. Despite pushing five of their matches beyond three games, the Cardinals were unable to beat the excellent Dickinson team; however, the the resolve and fight shown on Friday would shine through in the remainder of the weekend matches.

On Saturday, the Cardinals faced off against NESCAC rival Hamilton. Two weekends ago, in the NESCAC tournament, the Red and Black defeated Hamilton in a 5-4 matchup, so the Continentals entered the match with something to prove. Sadly for Hamilton, Wesleyan only got stronger since their last matchup. The Continentals’ fate would be worse than their first attempt to slow down the Cardinals. 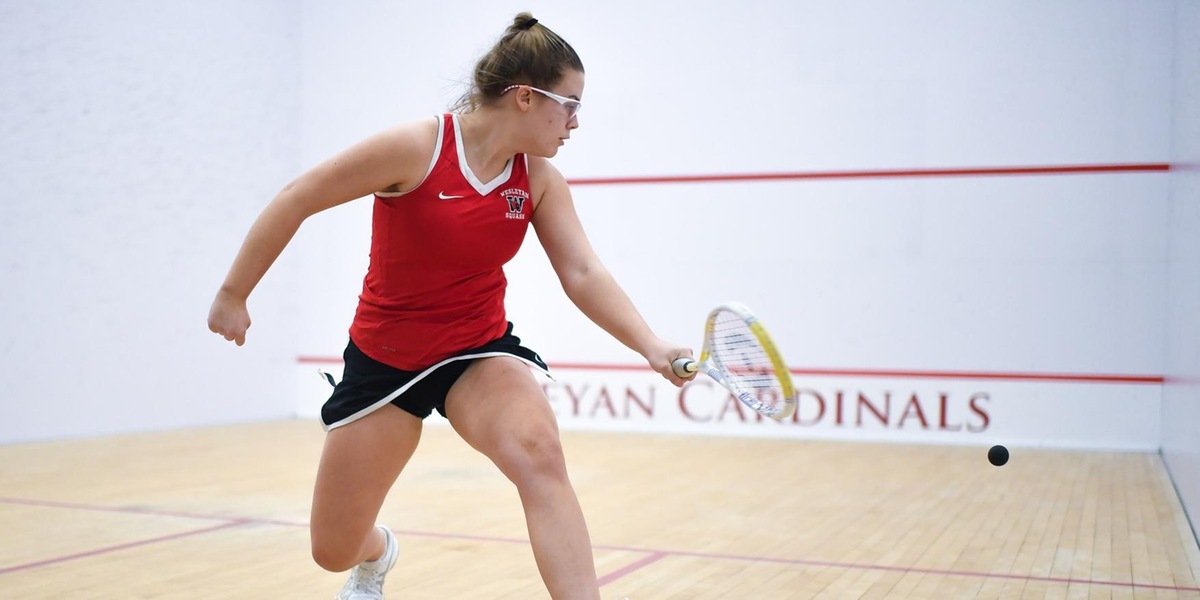 The Cardinals would win in convincing fashion: 6-3. Aditi Prasad ’21 and Ananya Vir ’21 would carry the team to solid sweeps on the first and second spots on the ladder, respectively. The Red and Black would need to bring even more brooms, as Nina Premutico ’20 and Feenstra would also deliver impressive sweeps from the fourth and fifth spots on the ladder.

Next, the old and the young combined to bring Wesleyan home to victory. Senior Ali Imperiale fought back from down two games to win in a heroic five-game match in her final weekend on the courts. Finally, Annie Roach ’22 brought it home for our mighty Cardinals with a win in five games, also battling back to victory in the last two games of the match.

Now 1-1 on the weekend, the Cardinals were pitted against the third-seeded Mount Holyoke Lyons on Sunday. In their first matchup this season, the Red and Black lost in a 5-4 heartbreaker in mid-January. Despite being underdogs, the Cardinals brought a killer attitude onto the courts for their final matches of the season.

It would take a spectacular effort and performance from the Red and Black to claim victory against the Lyons. In the three spot, Josephine Russ ’20 had an instant classic, winning her match in five games. The Cardinals did not permit the Lyons to ever get a foothold in the match, winning the first five matches to seal the victory. Sofia Melian-Morse ’21 walked off the court only five matches into the day, after dispatching her opponent in four games. It was already a glorious morning for the Cardinals. 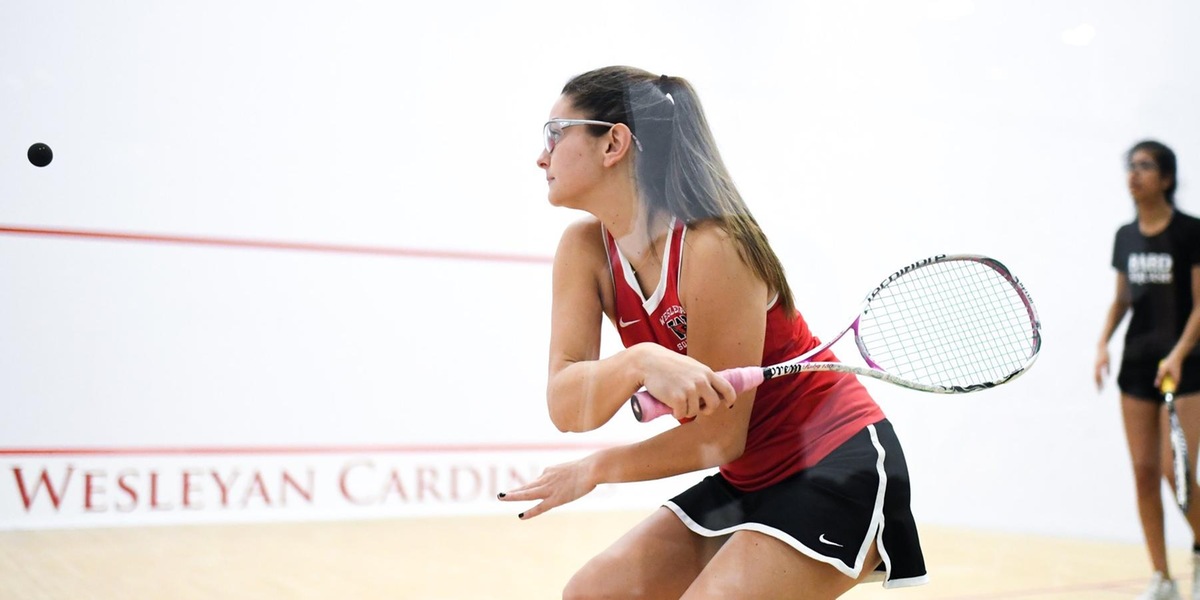 As the morning progressed, the tone of the day became more about the seniors’ final game.

“Playing my final match was definitely a mixture of nerves and excitement,” Ale Lampietti ’19 said. “I didn’t really take it all in that it was my last match until I stepped on the court, ready to start the first game. I wanted to play in a way that I could be proud of it as my last college squash career match ever. I did it all for my team, and I wanted to show them that I could play my best for them and end the season on a great note.”

The seniors on the team had a special role to play against the Lyons, with Imperiale winning in four games and Lampietti claiming victory in a clean sweep. Eventually, Wesleyan would go on to win 7-2, leaping two spots in the national standings to end the season as the No. 21 team in the country.

The seniors’ hard work all season did not go unnoticed, least of all by their proud coach Shona Kerr.

“The impact of the seniors was significant,” Kerr said. “They set the tone off the court that allowed players to perform in the court. We had two playing seniors and two injured seniors and each of them played a critical role to the team culture. I applaud and graciously thank Ale, Ali, Sarah [Clothier ’19] and Emma [Robin ’19].”

“As a first year, I’ve looked up to this group of seniors since day one,” Kim said. “Every one of them is incredibly kind, hard-working, and talented, and as a group, they’ve done an amazing job leading the teams. We’re going to miss them a lot next year.”

“I would say this year’s team was definitely the closest of any of my other years,” she said. “We were all so involved in each other’s lives in such a positive and supportive way.”

In the end, it is both the bonds developed off the court and the on-court success that define a brilliant year of Wesleyan women’s squash.