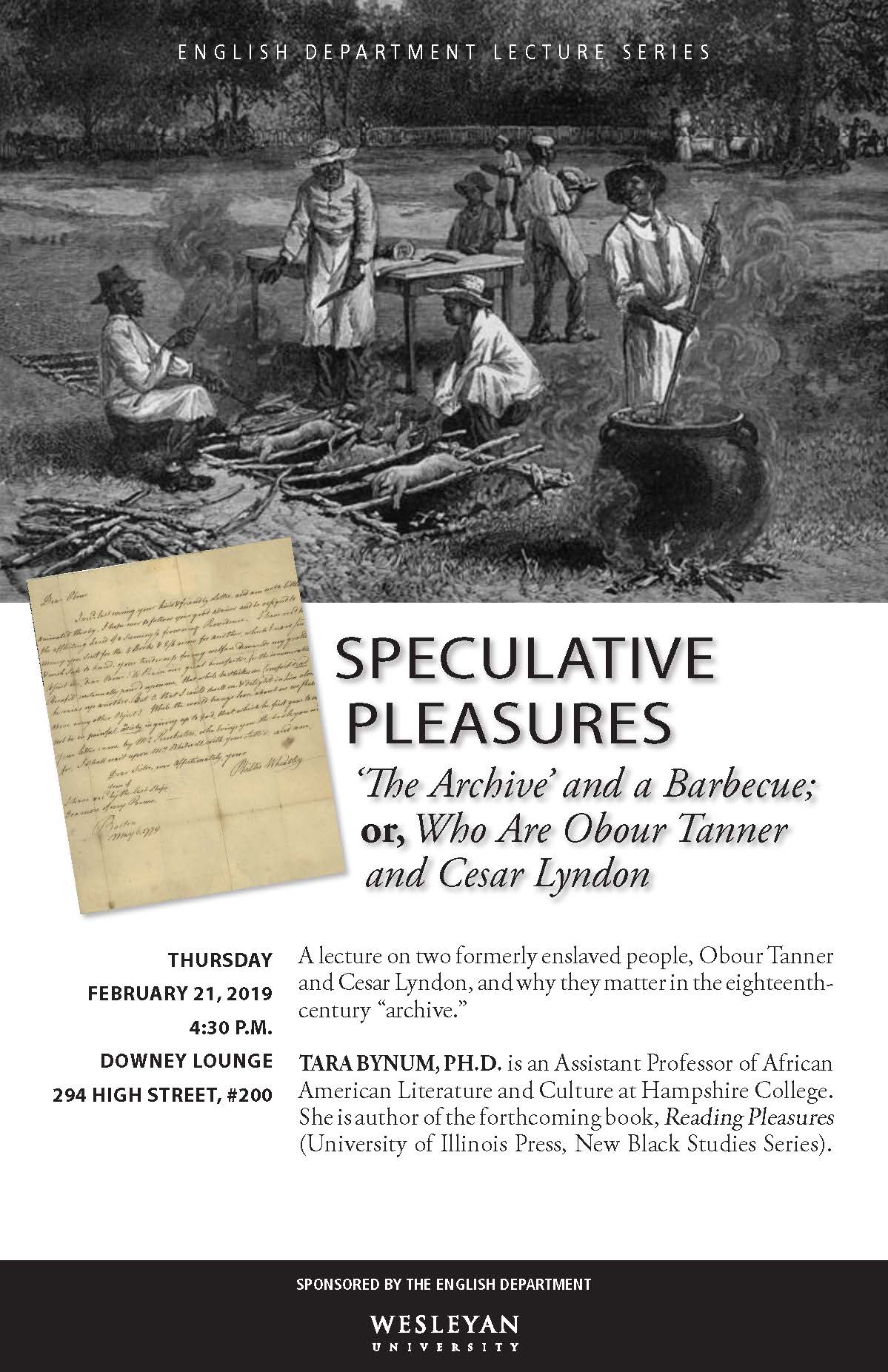 On Thursday, Feb. 21, the English Department hosted Assistant Professor of African American Literature and Culture at Hampshire College Tara Bynum to give a talk and answer questions from students and staff. The talk, entitled, “Speculative Pleasures: ‘The Archive’ and a Barbecue; or, Who Are Obour Tanner and Cesar Lyndon,” took place at Downey House with students and English faculty in attendance.

Assistant Professor of English John Murillo addressed the contents of Bynum’s forthcoming book “Reading Pleasures” in his introductory remarks prior to Bynum’s lecture.

“‘Reading Pleasures’…examines the ways in which 18th-century enslaved and/or free men and women feel good or experience pleasure in spite of the privations of slavery, unfreedom, or white supremacy,” Murillo told the audience.

Rather than summarizing the book, Bynum recounted her experience researching it. In the process of looking for texts that reflect pleasure and joy, Bynum found the failings of archives to preserve the writings of African Americans. She noted this lack of literary records makes any study of African-American cultural history particularly difficult.

“Black lives clearly don’t matter in the archive,” she said.

Bynum began her lecture by projecting an image of a letter by African-American poet Phillis Wheatley, written during the mid-18th century. She highlighted a mention of Obour Tanner, a friend of Wheatley’s, who has been the subject of some scholarship, mostly concerned with the two women’s correspondence. Little is known of her life, beyond that she was a servant to a wealthy Rhode Island family and was married to Samuel Hopkins, the famous abolitionist and theologian. Intrigued, Bynum took it upon herself to learn more.

“[I saw my archival research as a way] of making black lives matter,” she said.

The next slide was one of Tanner’s few surviving letters, which she wrote while president of an organization called the “Females Society.” Bynum pointed out that Tanner signed her first name as “Orbour” with an extra “r,” and that such spelling variations were not uncommon in her correspondence. The letter was addressed to the leader of the African Benevolent Society, which was founded in 1807. Bynum speculates that Tanner wrote it several decades after her correspondence with Wheatley.

Bynum then turned to researching the president of the African Benevolent Society, hoping to find more information regarding Tanner, but found nothing. After a series of other dead ends, Bynum at last came across the account book of Cesar Lyndon, an enslaved man living in Newport, R.I. What at first appeared to only be a list of financial transactions soon became significant when Bynum realized that Lyndon often did business with friends of Wheatley, putting him in close proximity to Tanner.

Of particular interest was a list of purchases for a pig roast that was to be held in August 1766. Bynum noted that several of the goods were imported, demonstrating the cosmopolitan nature of late colonial Rhode Island and Lyndon’s own personal prosperity.

“[The list included] wine, sugar, ‘tea and coffee,’ ‘limes for punch,’ beet roots, celery, and pickled lobsters,” she said. “He’s always selling pickled lobsters…. Lyndon spends quite a few pounds, shillings, and pence too to host this gathering, not only for his menu but also the necessary lodging.”

The guests of this gathering included Zingo Stevens, an important Newport stone carver, known for his gravestones, who was also a friend of Wheatley. Little is known of the other attendants, even their ages, but Bynum used the evidence at hand to approximate them.

“Zingo’s age is unknown, but he does die 51 years later in 1817, which would suggest that on this day in 1766, he is young enough to live another half century and old enough to love…and to roast a pig with his 30-something-year-old friends,” Bynum said.

She was unable to prove that Tanner and Lyndon ever met, but she emphasized that all her discoveries, from the civic-minded letters to the pig roast, highlight the pleasures of enslaved people that often go overlooked.

“[I start] at base with the idea that no matter what their political status is, we’re talking about people,” Bynum said.

When another audience member asked Bynum how she was able to extrapolate so much from such scant materials, she gave a concise response.

“I just trust [the writers] when they say it,” she said.

Trent Babington can be reached at tbabington@wesleyan.edu.