“Pink!” Delves into the Complexities of Girlhood and How Best to Represent It 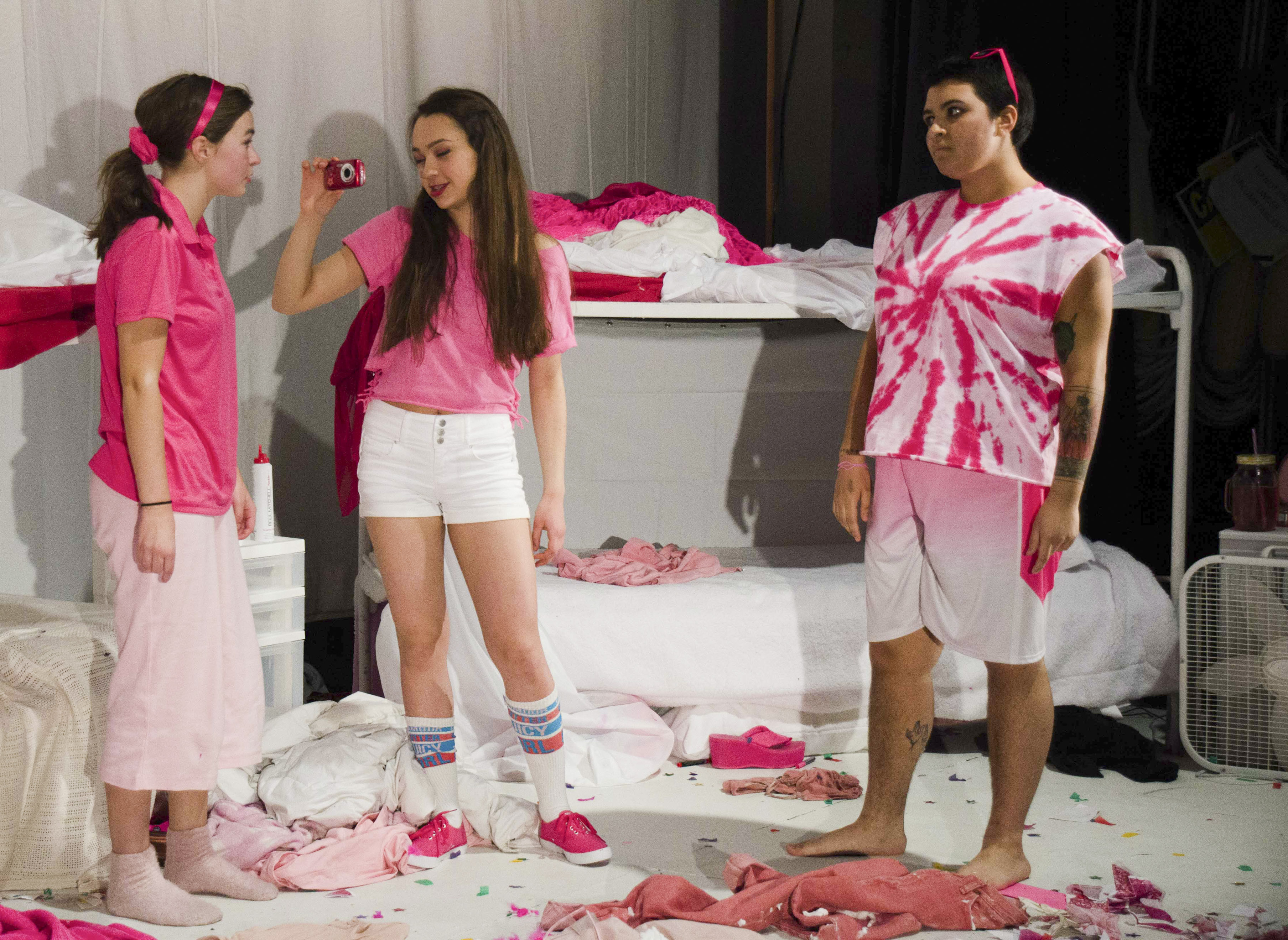 “Pink!,” written by Stacy Davidowitz and directed by Annie Ning ’20 this past weekend, was simultaneously one of the best and one of the most difficult to watch shows that Second Stage has put on this year. The play takes place at a summer camp that is implied to be wealthy, and examines the ways in which female socialization can lead to experiences of girlhood that are brutal, complex, and at times, darkly funny.

Davidowitz is a white, Jewish playwright, and her identity permeates the script, from the setting to the characters. Although this is a story that is generally about girls in their adolescence and the manner in which they inhabit their bodies and treat others, the script is written from a white and privileged narrative. Ning’s casting efforts were an attempt to subvert this narrative.

“I want to open the casting of the show up to all bodies—whether that be female-identifying or not, or non-binary, non-cis, people of all gender identities,” Ning wrote on the Facebook audition page. “I do not think the actors need to resemble young people in any way—neither age nor race of actors is specified, and I want to focus on casting a cohesive ensemble of actors in which the only condition is that you are comfortable playing a 12-year-old girl.”

In a cast of five characters, played by Luna Mac-Williams ’22, Elim Lee ’22, Grace Stanfield ’21, Caridad Cruz ’21, and Abby Meyers ’22, three of the actors were people of color, and one of those three was genderqueer. Directorially, this was a strong statement. Ning’s choice to cast a majority people of color transforms this from a play rooted in experiences that might be inaccessible to those with less privilege, and makes it a play about adolescence in a body treated as female by society, and the struggles and trauma that so often stem from this.

Part of this choice was rooted not just in addressing the normative ways in which girlhood is addressed in theater or art more generally, but in intentionally provoking discourse among Wesleyan and especially among the Second Stage community about various approaches to casting, and their varied levels of success.

“It’s in part a reaction to plays in the [Wesleyan] community that have sat on both sides of the ‘diversity’ token,” Ning wrote in her Director’s Note. “What does it mean to cast all-white or majority white shows, or to cast POC and other marginalized identities in specifically white and heteronormative roles without giving thought to how these casting choices impact the stories we tell? So we said, OK, let’s put up this very white show, very symptomatic of a specific kind of heteronormative womanhood…and find the gap that opens between the truth of these characters and the actors themselves.”

Though growing up as a womxn of color with less privilege might not have involved going to an expensive Jewish summer camp or having a big Bat Mitzvah celebration, seeing majority people of color actors on stage in “Pink!” made many of the scenes more easy to relate to for viewers of color than if the cast had been completely or mostly white women. Ning’s casting choices did not feel as though people of color were telling a white story, but instead that the story being told was more inclusive and representative of all voices. There was the weird excitement that comes with trying to help someone put a tampon in for the first time, sexy dances that were really cries to be seen as an adult and taken more seriously, the sexual nature of female friendships—and the ways in which this can be policed amongst girls—and the way young womxn learn what makes an idealized woman in our society from the adults in their lives.

The explicit decision to open the audition process to actors who do not identify as cis women makes a lot of sense for this show, since it explores what it means to grow up in an environment in which gender-based expectations are placed on you, or in which you feel the need to adequately perform femininity. In practice, the show ended up only including one genderqueer actor, who was cast as a character who, notably, seemed less concerned with performing femininity than the others. In an apparent nod to the Wesleyan audience, Samantha, played with superb stubbornness and humor by Cruz, reads Judith Butler’s “Undoing Gender” on the floor of the cabin, remaining largely wary as the rest of the cast experiments with the trappings of heteronormative femininity, discussing everything from plucking eyebrows to dry-humping boys. This did seem to succeed in Ning’s goal of drawing attention to the importance of intentional as opposed to arbitrarily “diverse” casting decisions. However, it also raised the question of what is demanded of actors who are asked to challenge normative roles; in terms of who is performing the labor of creating more diverse productions, and whether this is a fair burden to be placing on them.

Meyers did an extraordinary job as the anxious, eager Abby; she was also the physically smallest actor in the cast. The choice to cast her seemed reminiscent of the manner in which people comfortably joke that someone incredibly skinny is “fat” or “gaining weight.” It is a joke so far removed from reality that no one is offended. It brings up the question: Would it have been more powerful to see someone not quite so small playing the role of someone labeled “chubby?” Or would it have hurt too much to see this character portrayed in a more realistic manner? As a society, why is “fat” still a word we struggle to associate as positive? 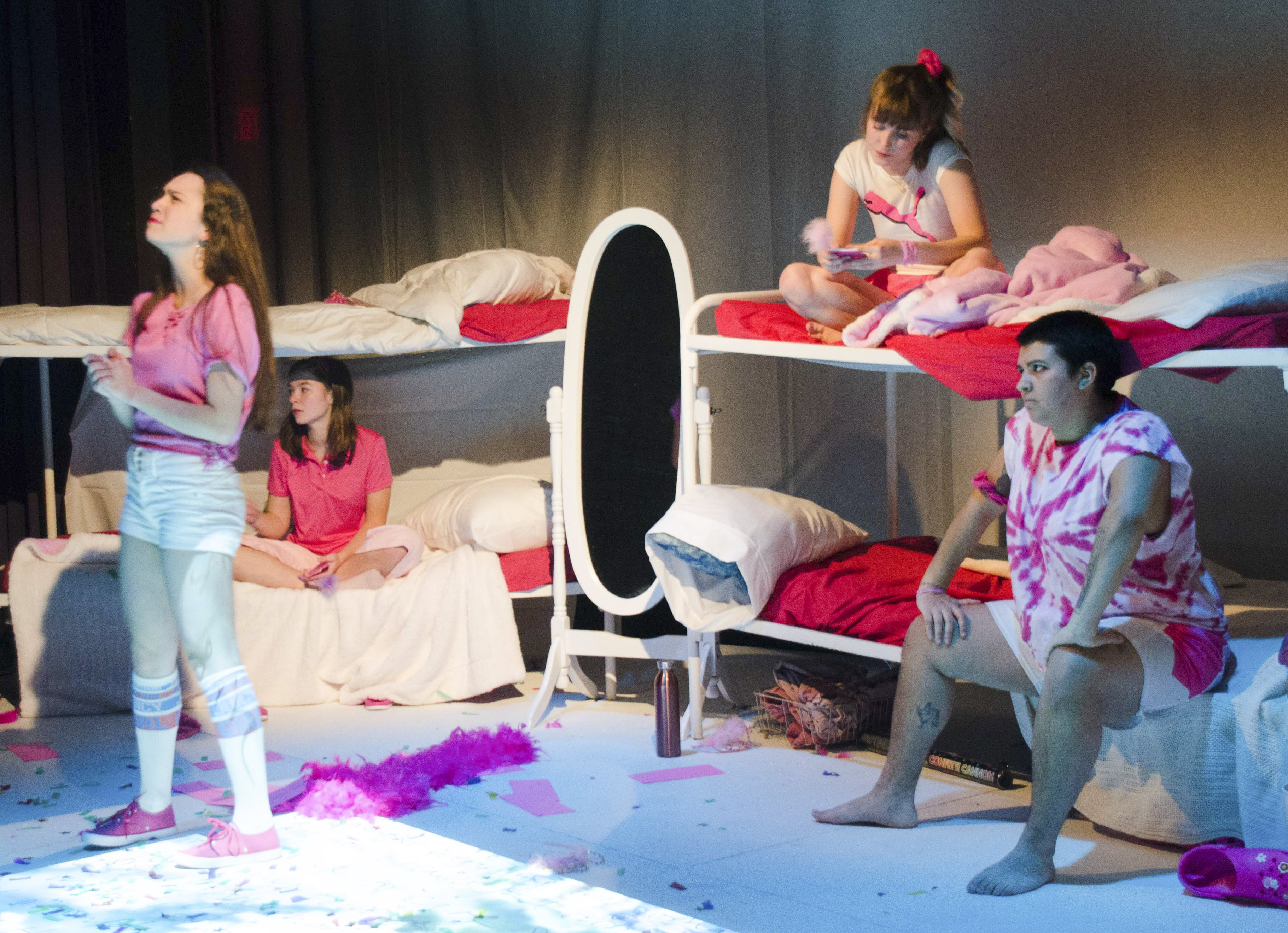 Such a situation, however, is hardly limited to this show, but rather is indicative of a larger problem within the Wesleyan theater community. It seems that individuals often feel comfortable explicitly discussing other identities in casting—such as race, gender, or sexuality—but not talking about body diversity, or considering how this could contribute to more nuanced interpretations of roles.

One of the strongest aspects of the show in terms of directorial decisions was the way in which the show used the space of the ’92. Rather than positioning the audience on risers watching a show take place onstage, the audience sat onstage as well, mostly on cushions, pillows, and blankets on the floor, with curtains partitioning off the performance space from the rest of the theater. This brilliant set-up carried the discomfort of watching the show into the physical positioning of the audience, who were forced to feel like they were at camp themselves, sitting on the floor of a cabin in a slumber-party fashion. The coziness of the pillows and blankets also provided a strong contrast to the seriousness of the show, reminding the viewer of the way in which violence and trauma can pervade spaces that are thought to be safe—the domestic, the “girly.” The set-up also meant that the audience was much more intimate, at only 50 people. This, along with the tightness of the space, meant that you truly felt thrown into the experience with the people that you were watching with, much like summer camp, and felt an exclusivity from the smallness of the audience that mimicked the cliquiness portrayed onstage.

The set design overall was simple but largely effective, with bunk-beds in white and pink accented by a Jonas Brothers poster. One of the smartest aspects of the design was the use of confetti, especially in a scene in which a girl struggles to effectively insert a tampon, and, upon succeeding, watches confetti burst out of it—a scene that provided much-needed laughter. The costume design was all-pink Hollister-esque ensembles for most of the cast, a choice which lent a touch of surrealism to the show due to its monochromatic nature, and which further accentuated the contrast between the characters’ apparent youngness and the seriousness of the material explored.

A question that the audience was left with was whether the thoughtfulness of the show justified its being put on at Wesleyan, despite the trauma that it resurfaced for so many. The crew was certainly very conscientious about including trigger warnings both in the Facebook event and before the show and including relevant resources, but many people after the show still seemed thrown off by the extent and tone of the show’s content for many different reasons, and felt like it had dredged up a lot of traumatic experiences without being able to provide catharsis. This is perhaps more relevant to the script itself, but should be mentioned in the conversation around the value of producing the play on the Wesleyan campus.

This is not to say that the production wasn’t excellent, because it was, but because the show explicitly invited discourse and critique of its goals, we hoped that this piece might offer some useful ideas around what kinds of conversations we could be having as a campus about this piece and more generally, about theater.

If you didn’t see “Pink!,” simply put, you missed out on a great show. From the acting, to the directing, to the scenic design, and the choreography, it was clear that everyone who worked on this project was very thoughtful in their individual work and the cohesiveness of working on this as a team. More importantly, the efforts to rework this play into a more diverse story with further reach mark a growing shift in the Wesleyan theater scene. Perhaps more shows that go up in the future will attempt to tackle, both in content and performance, issues of emotional resonance, diversity, and inclusivity in such a multifaceted manner.