“Middletown” Is a Sharply Existential Take on Small-Town Life 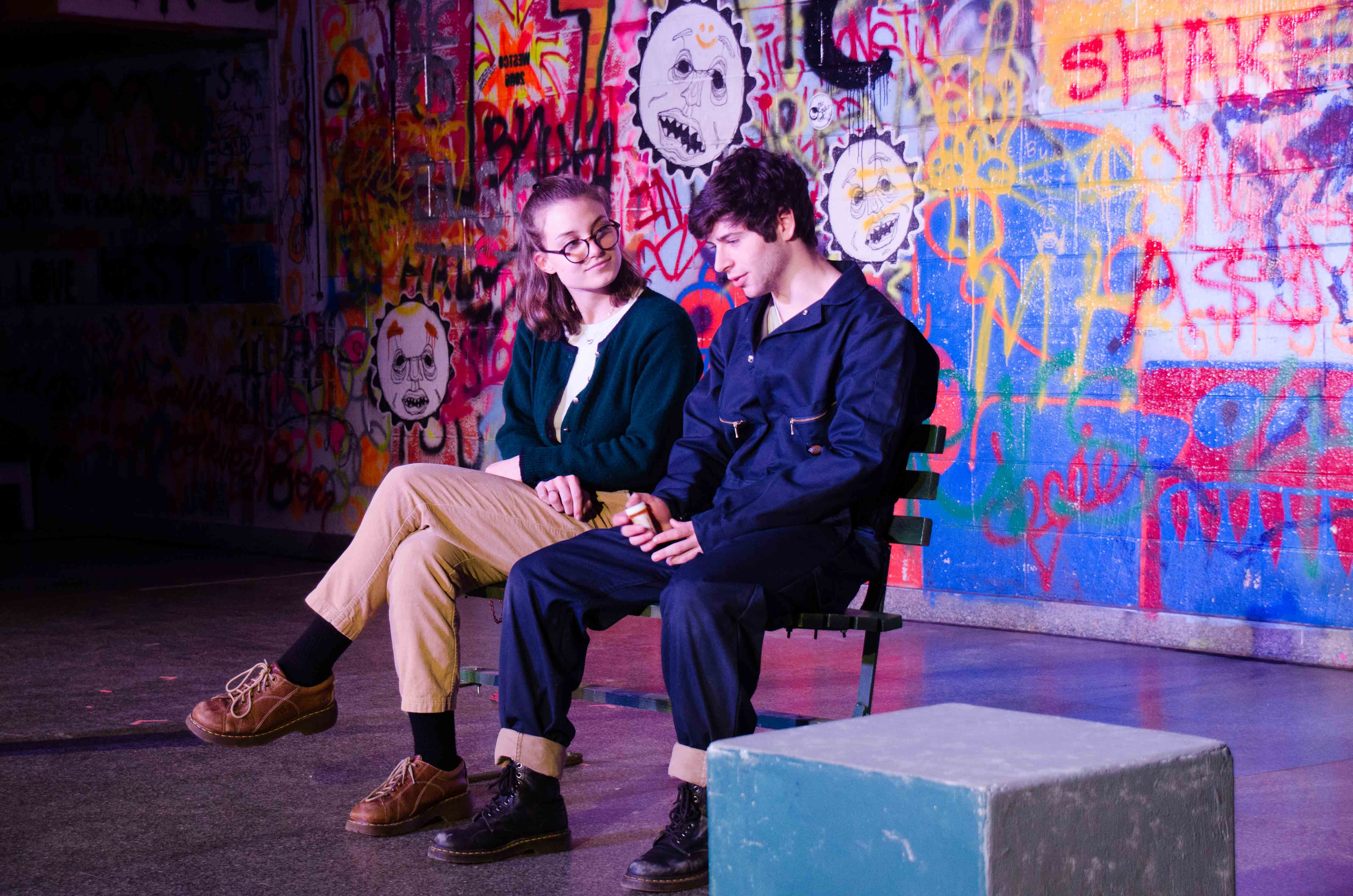 “The main street is called Main Street, the side streets are named after trees,” a police officer (Marcos Pinto-Leite ’22) tells the audience of “Middletown,” describing the play’s titular setting. “Things are fairly predictable. People come, people go. Crying, by the way, in both directions.”

This mixture of gentle banality and nonchalant observations on the nature of life and death is characteristic of “Middletown,” which went up in WestCo Café this past weekend. Directed by Joanna Gerber ’22, the play follows various residents of Middletown as their paths repeatedly diverge and intersect. Despite what many viewers (myself included) might initially have guessed, the play is not about Middletown, Conn., but rather a fictional town in an unspecified part of America. The intentionally vague nature of the name “Middletown”—chosen because it is located in between two other, bigger towns—is less immediately apparent to Wesleyan students, who live in a real, physical place with that name, but in fact it’s a fittingly generic name for a place that is less a town than an idea of a town.

The play’s spare, minimal set—a library consists of an information desk and a single bookshelf, while two adjacent homes are represented by two empty window frames—helps bolster the perception of Middletown as a kind of archetypal representation of every small town. So too do the town’s residents, many of whom remain nameless and hold the kinds of jobs (mechanic, librarian, astronaut) you might expect to see in a children’s book depiction of adulthood.

But just behind this façade of wholesome, simple small-town life lurks a kind of collective metaphysical anxiety which gives “Middletown” its edge. The everyday routines of Middletown’s residents are given added weight by their shared sense of awe and dread at the very fact of their own being. It’s as if the entire town is staring into the void.

The people of Middletown both understand the existential horror looming at the edges of their lives and treat it as an unavoidable, even unremarkable fact of existence. In between checking out library books, giving walking tours, and planting trees, various characters deliver bluntly philosophical commentary about the universe as casually as they might discuss the weather.

There’s little in the way of actual plot during the first act of “Middletown.” Instead, the play consists of a series of loosely connected scenes of town life, such as a cop aggressively confronting a late-night loiterer or a tour guide attempting to explain local history to a pair of unimpressed visitors. The concept of a low-stakes story about a small town that is really a story about life in general will no doubt sound familiar to fans of Thornton Wilder’s “Our Town,” and in some ways “Middletown” does feel like a spiritual successor to the famous play. But where Wilder’s writing is clear and straightforward, “Middletown” playwright Will Eno’s is verbose and full of elaborate digressions. The lack of action in the story means “Middletown” relies more heavily on its dialogue to effectively provide meaning and entertainment, and in many cases, Eno’s script does prove up to the task. In one such scene, Middletown’s newest resident Mary Swanson (Annabel Asher ’22) visits the local library to ask about signing up for a library card.

“Good for you, dear,” the librarian (Gabrielle Baba-Conn ’22) replies brightly. “I think a lot of people figure, ‘Why bother? I’m just going to die, anyway.’” 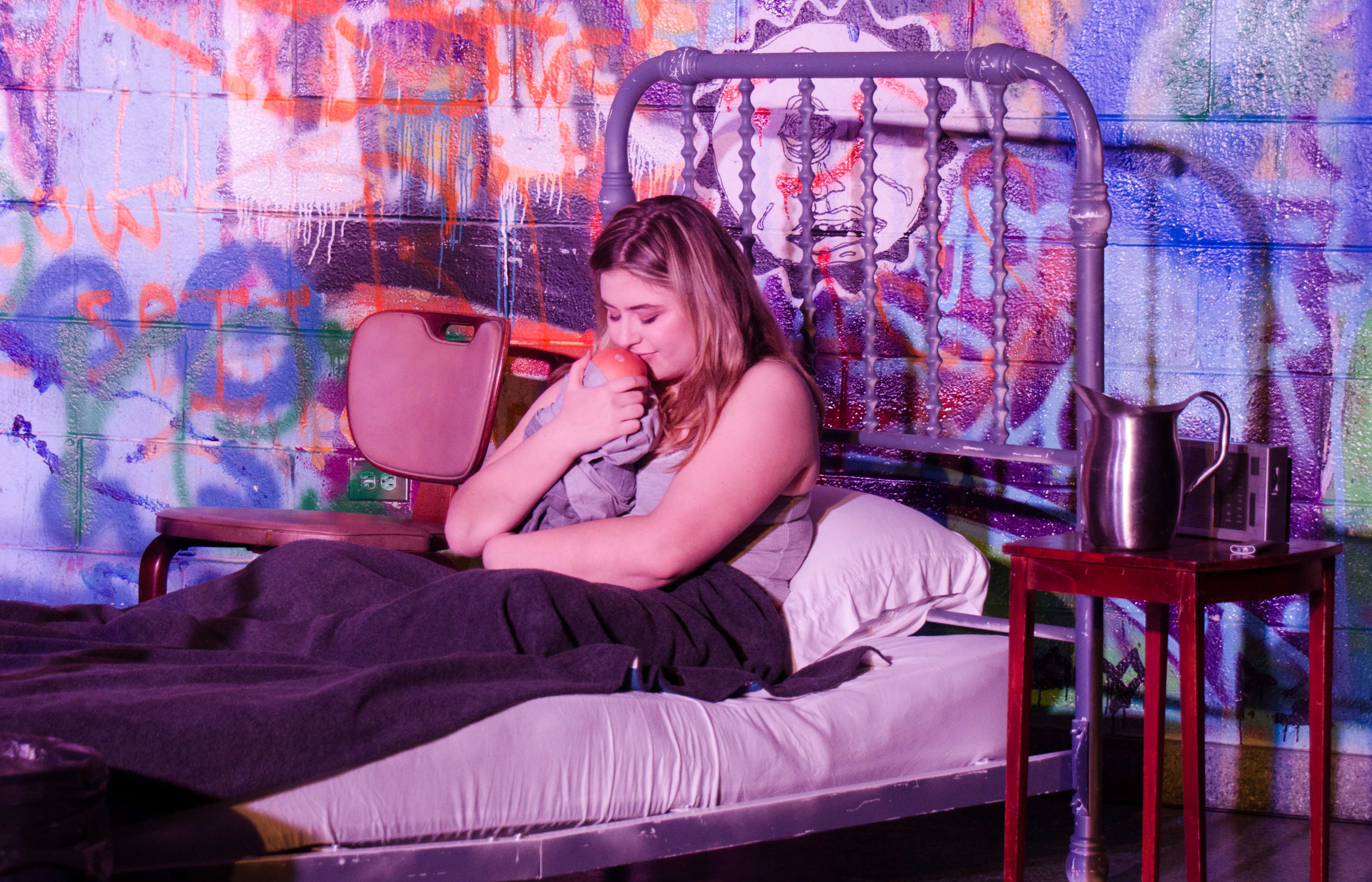 Baba-Conn’s cheerfully casual delivery gives the line a sharp humor, and at its best, “Middletown’s” dialogue is peppered with such unexpectedly piercing observations. Sometimes, however, the script feels overwritten, as though it’s pushing too hard for profundity. Audience members can only be expected to sit though so many conversations about the nature of humanity.

When the play does drag, it’s despite the best efforts of the actors, whose performances are nearly uniformly excellent. Baba-Conn’s perpetually sunny librarian and Pinto-Leite’s quietly malevolent cop are particular highlights, as is a troubled mechanic played by Matt Grimaldi ’21.

Plotwise, the play picks up after intermission, tightening its focus on the relationship between Mary, a lonely, pregnant transplant whose husband is constantly traveling for work, and her neighbor John (William Miner ’22), an anxious part-time plumber. This second act is when the play’s themes of life and death rapidly cease to be hypothetical and become very real. Theoretically, this increase in action should eliminate the issues present in the first act, but even towards the end, “Middletown” sometimes feels longer than necessary. This may be because of the play’s choice to focus on John and Mary. It’s clear that the pair is supposed to serve the role of everyman characters, and that the audience is meant to find their relatively mundane lifestyles more relatable than those of the violent police officer or alcoholic mechanic, but the truth is that this mundanity makes John and Mary less compelling protagonists. Nonetheless, Asher and Miner imbue their somewhat vaguely-sketched characters with quiet, yearning desperation, and it’s in spite, not because of their acting, that John and Mary are simply less interesting that their quirkier neighbors. Where “Middletown” succeeds, in the case of both its protagonists and its general story, is in giving voice to the emotions that most of us never acknowledge out loud.