On to Nationals: Women’s Squash Competes in NESCAC Tournament, Set to Host NCAAs 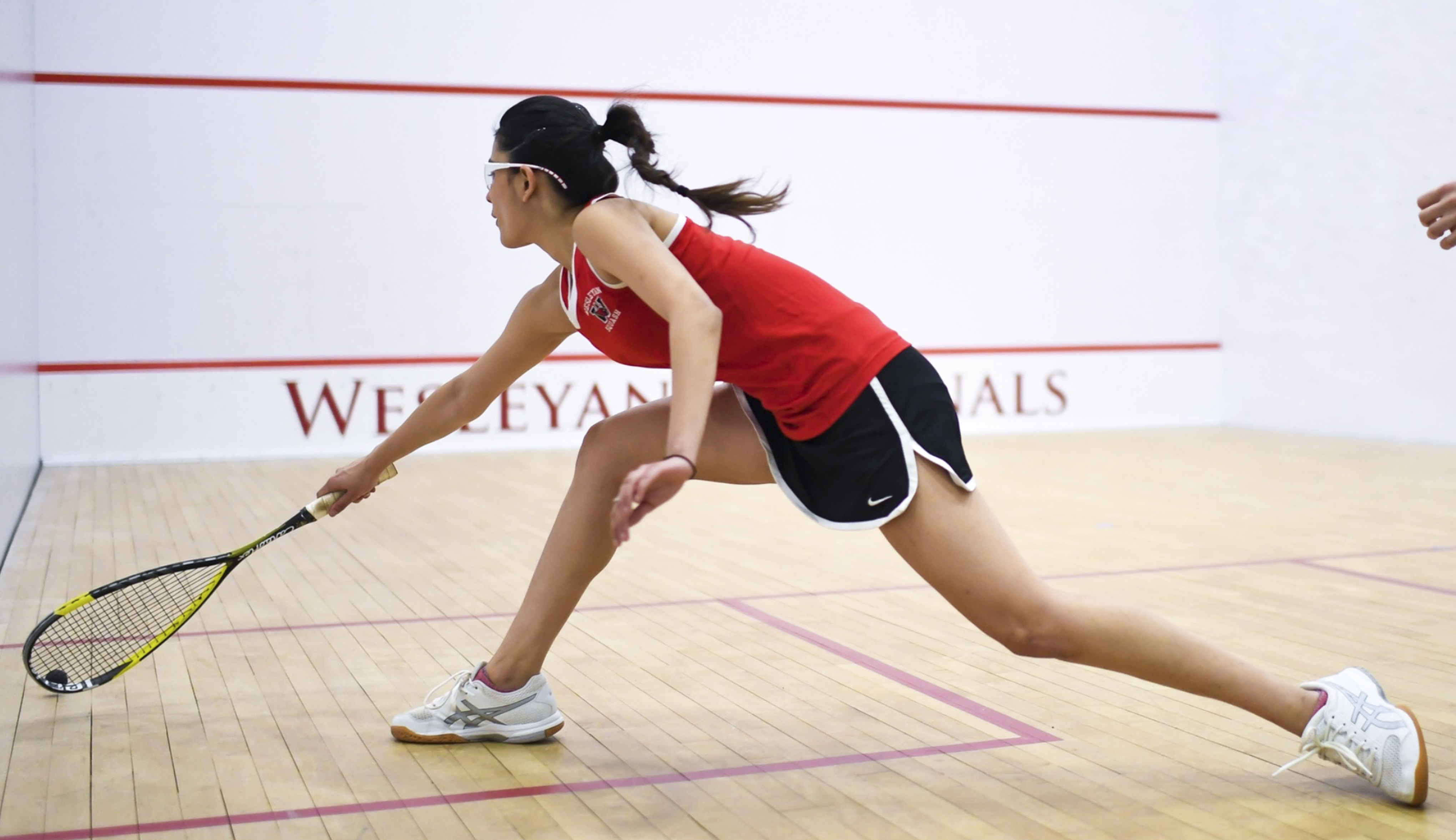 The women’s squash team completed a brilliant weekend-long NESCAC run on the weekend of Feb. 8. Heading into the tournament, they were the No. 8 seed and were first matched up against No. 9 Colby. On paper, the Mules’ season has been similar to the Cardinals’: both teams have beaten the same squad, so one could assume it’d be a competitive match. Yet as the day progressed, it was clear that the Red and Black had a special performance coming. Wesleyan routed Colby 9-0 in a complete team victory that showed both the depth of elite talent in the program.

At the top of the ladder, Aditi Prasad ’21 delivered a decisive 3-0 win over Colby’s number one, Sydney Annalise Ku. Next, both the two and three on our ladder, Ananya Vir ’21 and Josie Russ ’20, respectively, competed in tight matches that lasted five games, but both Vir and Russ emerged victorious. Wesleyan’s deep roster was in full force, as the bottom of the ladder showed out as well. Ali Imperiale ’19, Sofia Melian-Morse ’20, and Annie Roach ’22 all cruised to convincing 3-0 wins. Overall, the first match was a success for our Cardinals.

The Red and Black then had a tough matchup against top-seeded Trinity, a team who has won the tournament each of the past 12 years. Despite Wes’ best effort, Trinity emerged with a victory and would eventually go on to win the tournament once again.

After an exhausting match against Trinity, Wesleyan was put up against Tufts in the same day. With little left in the tank, following a series of long matches, the Cardinals fought hard but were swept by the Jumbos.

Senior captain Sarah Clothier noted how the NESCACs are a drill in mental toughness.

“I’d say the toughest part of this weekend was pushing ourselves physically and mentally to achieve our goals, all while having four matches in under two days,” Clothier said.

Following these two tough losses, many teams would have packed it in for their final match on Sunday against Hamilton. The teams were forced to cancel their match earlier this year, so our Cardinals hadn’t faced them in nearly a year since they eliminated the Continentals in a tight 5-4 matchup. This year No. 9-seeded Hamilton arrived ready for battle but was met with an even fiercer Wesleyan, ready to give everything it had.

At the top of the lineup, Prasad once again delivered a key 3-0 victory that set Wesleyan up for success for the rest of the day. Vir, in the second spot on the ladder, dropped her first set but rallied to win the next three, producing a well-earned 3-1 win. Nina Premutico ’20 and Natasha Feenstra ’21 also swept Hamilton from the fourth and fifth slots of the ladder. However, Hamilton showed their grit, winning from 6-8 in the lineup, seemingly setting themselves up for a bottom of the lineup victory against our Cardinals. However, first-year Roach had other ideas. Battling in a four-game spectacle, she sealed the victory for the Cards.

“After losing the first six points of the match, and then being down 3-8 in the third game when it was tied 1-1, I told myself both times that I had to figure out a way to come back,” Roach said. “So I did, and it was one of the most exciting moments of my squash career so far.”

“The highlight was definitely when we upset Hamilton in the last round on Sunday,” Clothier said. “Considering we narrowly beat Hamilton at last year’s NESCACs, we knew it was going to be a tough fight, but the team left everything on the court to clinch the win.”

Roach also had an insight to share as the NESCACs, the biggest tournament for the women’s squash season, wrapped up.

“Even though squash may seem like an individual sport, our team dynamic is what motivated me,” Roach said. “All of the women on our team are strong, remarkable athletes who really proved what they could do this weekend. I am so excited for the last two weeks of the season to continue to flourish as a team.”

“The biggest take away from this weekend is how tough the team has become as competitors, that is physically, mentally and strategically,” Coach Kerr said. “We will try to continue this momentum towards nationals in two weeks. The women will play the national championship on our home courts, the first time ever that this tournament has not been played at an Ivy League school.”