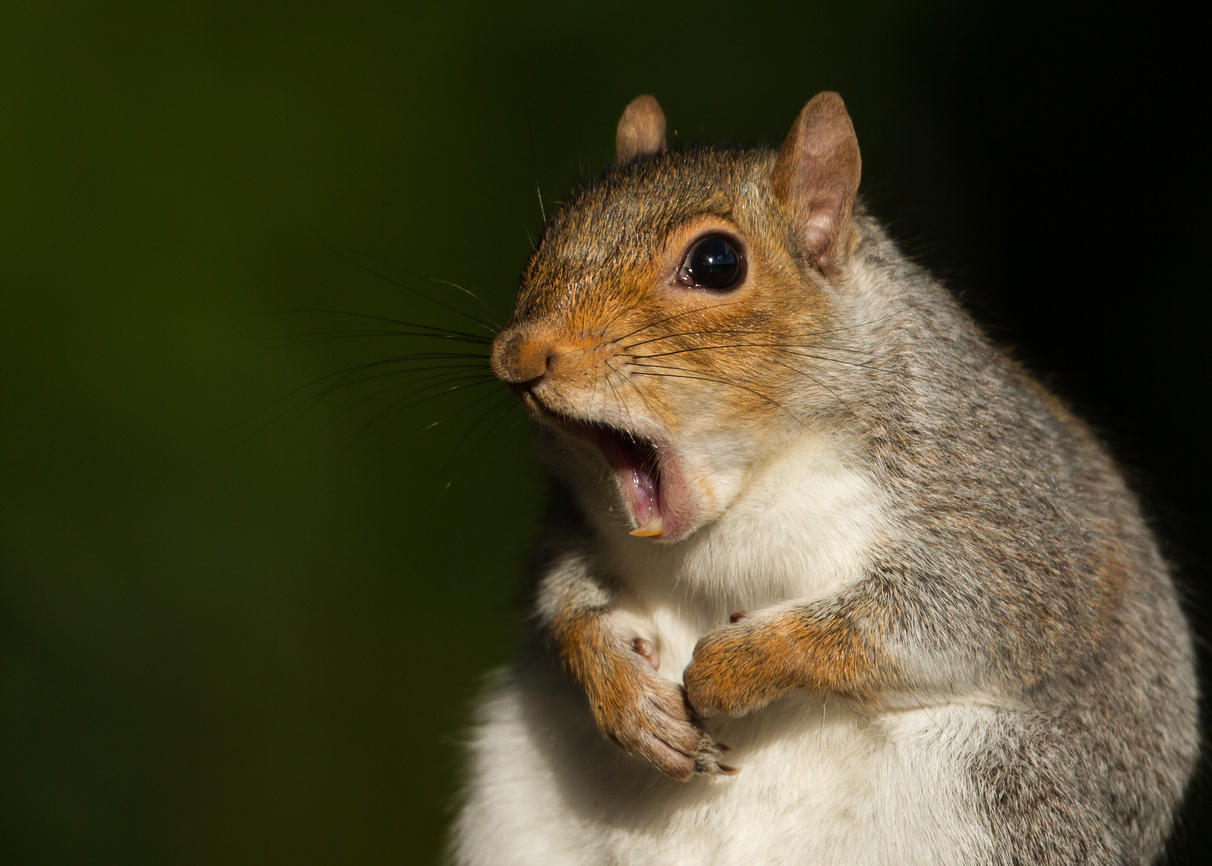 This past Wednesday, as I sat eating a banana in preparation for a long afternoon of analyzing Shakespeare, I noticed a man hovering suspiciously over a nearby trashcan, talking rapidly into his cell. My interest piqued, I removed my headphones.

Now fully intrigued, I approached the trashcan, readying my peel for disposal. The man, ostensibly a fellow Wesleyan student, seemed visibly excited to see me and exclaimed: “Can you help? There is a squirrel stuck in the trashcan.” I feigned ignorance. The squirrel, he explained, had gotten itself twisted in the plastic trash bag and now found itself unable to climb to the can’s opening.

Before I was able to ask how I could be of use, the student had removed the base of the trashcan and knocked it over. Out poured coffee cups and empty chip wrappers. “He’ll be free now,” the student assured me, before promptly gathering his belongings and walking away from the scene. I made my way to my Early Modern England class with renewed enthusiasm; I had a newfound investment, both in the identity of the mystery trashcan man—some kind of squirrel whisperer, I gathered—and in the wellbeing of our campus squirrels.

At the end of every tour that we give here at Wesleyan, we’re supposed to give our “Why Wes” spiel— the story of what made us choose this school over others, or over not coming to school at all. These stories vary. I’ve heard everything from “I saw a guy freestyle dance in the middle of Usdan” to “I fell in love with the Gov. professor whose class I visited” to “My overnight host and I had a Melee tournament with randoms from down the hall.”

My story focuses on cows, and my minivan, and Usdan brunch. As someone who likes telling dramatic stories just a little too much, I’ve worked to perfect my phrasing and my comedic timing until I could tell the story in my sleep.

But because we end our tours at the top of Foss, it means that more often than not the telling of this story will get interrupted by something (or someone). Whether it’s a black squirrel (“Wait, I thought those were supposed to be gray?”) or some kind of impromptu karaoke competition between sunbathing Wes students, there’s almost always something to break my storytelling flow.

I love when this happens—I figure if people are visiting Wesleyan, they should get a full idea of why Wes is Weird and all—and I’m used to it enough that I can easily get right back on track once the distraction has passed.

The other day, though, proved to be too much for me to continue on normally.

When I gave this tour, there was still snow on the ground. The combination of the previous day’s rain and the morning’s unusually cold weather meant that Foss and the field in front of it were basically a sheet of ice. As I began to talk about my hometown, I saw a handful of Wes students out of the corner of my eye. Before my tour group and I got there, I could see them taking turns sledding down Foss, sliding quickly due to the conditions. They picked this moment, of course, to pack all four of themselves onto a small children’s sled. I could see people in my group peeking over at the motley crew as they inched themselves forward with their hands, slowly reaching the lip of the incline.

I paused for a second, thinking this would be a quick diversion, and that we could wrap up the tour soon afterward.

Once the second group started sliding, I knew this would not be the case. They were flying down Foss—so fast that the person at the back quickly bailed, jumping out of the sled and sliding on their back down the rest of the hill. The other three sailed down the hill and kept going and going. One more person jumped ship; by the time the group stopped moving they had reached the opposite side of Andrus and were running back and forth on the sidewalk cheering (I assume) the fact that they traversed the entirety of central campus.

I looked behind me down the hill at a student in a puffy jacket, lying spread-eagle at the bottom of Foss, another sitting calmly in the middle of an empty snowscape, and two more hugging each other and screaming behind the Chapel.

I turned back to my tour group, half of whom were cheering along with the people at the opposite side of the field. I didn’t bother telling the rest of my story. These four had summed up my “Why Wes” better than I ever could.

I have never been more sure of the presence of the Wesleyan community than during the time I have spent at the baggage claim at the Bradley International Airport. None of what happened on the night I returned to campus a few weeks ago was particularly shocking or unfathomable—it was all pretty much a normal case of happenstance, which could also be called a perfect storm. But it took an hour to get from my house to the airport, an hour and a half to get through TSA during the government shutdown, and four hours to get from Colorado to Connecticut by plane. A mixture of excitement and anxiety and some unknown, cruel force always keeps me up the night before I take flights, so by the time I got to baggage claim, I was already half-asleep. This exhaustion made my travel troubles more akin to scaling a mountain or fighting a dragon.

It was 11:35 p.m. EST when the plane landed, and I couldn’t wait to get back to campus and climb into my bed. Unfortunately, I was changing residences to move into a program house for this semester and the ever-so-reasonable Department of Residential Life had sent me an email at the end of last semester that essentially said, “your stuff can’t be in your old room and it can’t be in your new room, so figure something out.” (I am admittedly paraphrasing.) When I received this email last semester, I was in a caffeine-powered frenzy of final papers and exams and couldn’t comprehend the logic of what they were telling me. “What do you want me to do, take out a storage unit for a month?” I asked in a phone call to ResLife, my voice short of trembling. “Yep, or you can bring your stuff home,” they helpfully responded. So, the day before I left for winter break, a wonderful friend whose kindness I will never be able to repay helped me move my things from the Butts to the library of the program house on Washington St., where it remained until I returned to campus.

In the baggage claim, I had bonded with a group of Wesleyan students as we all waited for our bags. Bradley is one of those places where you can unexpectedly meet people from all corners of campus, people whom you would never encounter except in a location outside of campus. We had a lovely conversation about classes, vacation, and a plethora of other small-talk go-to’s.

It was a balmy six-degrees when our Uber arrived and dropped me off at the Office of Public Safety so I could pick up my new key. With my suitcases in hand like an aspiring actress showing up with an overly-optimistic expression in New York City, I took in the calm of College Row, deserted in the middle-of-the-night, end-of-break stillness. After grabbing my key from the woman at the front desk, I put on my kindest expression to ask if someone could please drop me and my bags off at my new residence, to which I was told I should wait for the Ride to come pick me up. “Can you drop a student off at 202 Washington St.?” I heard the woman say into her walkie-talkie. “I don’t know where the hell that is,” the walkie-talkie responded. “He’ll be right here,” she said, turning to me as if I hadn’t heard what blared from the phone speaker, “You should wait outside.”

After waiting twenty minutes and feeling the circulation stop in my fingers, I finally saw a beautiful sight to behold: the glorious Ride barreling down High St. I nearly jumped up and down for joy. But when I got to the backdoor of my new home, my heart plummeted. Holding my ID up to the sensor repeatedly, I was met with only a red light and an unsatisfying beep. It took me twenty more minutes to get inside.

This adventure may seem trivial or dramatic, or even a bit boring (but please don’t tweet me if you find it boring). But after the whole ordeal of traveling back to campus, I was content to find that the emotion that stayed with me was not annoyance or bitterness (though I had a fair amount of those), but that there was nowhere else I would rather be at the end of a long day.