A Guide to the Grammys, for People Who Skipped The Grammys 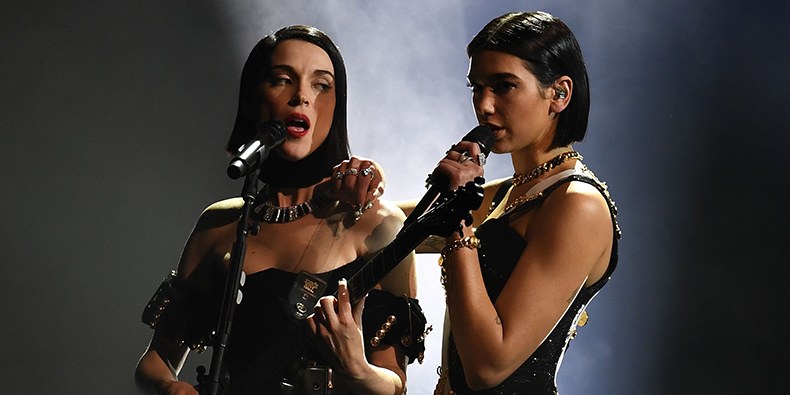 Did you watch the Grammys this past Sunday? If not, I can’t say I blame you. By and large, the Recording Academy (the organization responsible for presenting the awards) is a stodgy, unimaginative crowd that struggles to keep up with an increasingly rapidly changing musical landscape. If you’re looking for a concise encapsulation of the organization’s decidedly backwards attitude, look no further than Recording Academy President Neil Portnow, who responded to controversy over the lack of women being recognized at last year’s Grammy Awards by suggesting that female artists merely needed to “step up.” And aside from the Recording Academy’s track record of consistently choosing safer, more conventional records over genuinely groundbreaking ones—Adele’s 25 over Beyoncé’s Lemonade, for instance, or Macklemore’s The Heist over Kendrick Lamar’s Good Kid, m.A.A.d City—there’s the awards ceremony itself, a three-hour behemoth of a show which drags on and on (and somehow only has time to present nine out of the 84 total awards onscreen). On the scale of compelling Sunday night activities, watching the Grammys ranks somewhere between giving my sock drawer the Marie Kondo treatment and reviewing my organic chemistry notes. Despite all of this, the Grammys are still holding onto their status as a cultural touchstone (albeit by a thread; viewership this year just barely beat the 2018 ceremony’s record-low numbers), so if you couldn’t muster up enough interest to watch the actual ceremony but still want to know what everyone is talking about on Twitter, here’s a guide to Sunday night’s most buzzworthy moments:

Runner-up: Shawn Mendes and Miley Cyrus, performing “In My Blood”

Listen, I have nothing against JLo. She’s a genuinely talented dancer, a decent (fine, maybe just passable) singer, and generally possessed of the kind of glitz and star power that fits right in at the Grammys. But placing her at the forefront of a tribute to Motown music is a decidedly odd move. Even if Lopez did have the vocal power to pull off any of those songs, and even if she hadn’t seemingly lip-synced her way through the entire thing, her central role in a performance meant to showcase a musical genre invented and popularized by Black musicians is not a great look, especially when there are literally dozens of R&B artists with the background and talent to do Motown justice.

St. Vincent’s performance of her single “Masseduction” (which won Best Rock Song) started off strong, but the surprise addition of Dua Lipa (who won Best New Artist) immediately turned it into one of the night’s highlights. Despite their differing musical styles, the two artists’ charismatic, sultry stage presences (and matching haircuts) made them a shockingly strong team.

Runner-up: Taylor Swift’s Reputation only getting a single nomination

St. Vincent is a formidable guitarist and a precise, articulate songwriter, so her win for “Masseduction” is not a surprise because she doesn’t deserve it, but rather because the Grammys’ rock categories have historically been dominated by white dudes like those of U2 or Foo Fighters. Perhaps St. Vincent’s award is a sign that the Recording Academy is finally ready to acknowledge the contributions of previously ignored female rock musicians. Then again, Muse just released another album, so perhaps not.

Most Uncomfortable Moment: Drake’s Acceptance Speech Getting Cut Off

Drake (who turned down the opportunity to perform but surprised viewers by appearing onstage to accept a Best Rap Song award for “God’s Plan”), gave a somewhat disorganized but genuinely interesting speech about the Grammys’ validity as a marker of success, pointing out that the people who vote for the Grammys aren’t necessarily those best equipped to judge a musician’s ability. As such, it was frustrating to see him cut off mid-sentence. I’m not saying that the show’s producers purposefully interrupted Drake for questioning their relevance, but I’m not saying it’s impossible either.

Ariana Grande (who won her first-ever award: Best Pop Vocal Album, for Sweetener) was scheduled to perform at the Grammys up until the week before the ceremony, and even appeared in multiple promotional photos for the event, so it was big news when show producer Ken Erlich claimed in an interview that she was no longer performing because she felt unable to put together a performance in time. Grande immediately shot back at Erlich, accusing him of lying about her true reasons for dropping out and compromising her artistic vision.

Grande’s absence, while melodramatic, was at least voluntary. 21 Savage, who was nominated for two awards, missed the ceremony due to being detained by ICE last week, a fact which went disappointingly unaddressed for much of the show. Even Post Malone failed to mention his missing collaborator after performing “Rockstar,” the song they created together. Then again, this silence was perhaps a fitting encapsulation of the entire 61st Grammy Awards, a show defined entirely by what it lacked.