“You Can Always Do More”: Sam Bidwell ’21 Talks Childhood, Scholarship, and Deaf Culture on Campus 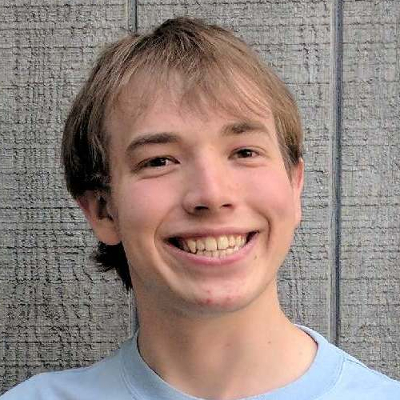 When Sam Bidwell ’21 was 11 months old, he contracted meningitis, which led to profound hearing loss.

“By the time I was 14 months old, they already deduced that hearing aids did nothing and that I was eligible for cochlear implants, so they got me replacements,” Bidwell said. “I gained hearing almost immediately.”

Bidwell is a recent recipient of the Cochlear Americas Graeme Clark Scholarship, a four-year grant for high-achieving students with a particular model of the cochlear implant, the Nucleus. The scholarship is offered to only five students each year and is awarded based on a combination of academic achievement, leadership experience, and community involvement, according to the organization that provides the grant and developed the cochlear implant technology itself.

Cochlear implants, meant to aid those with moderate-to-profound hearing loss, help people like Bidwell better understand speech. The technology is distinct from hearing aids in that—rather than amplifying sound—implants mimic the parts of the inner ear that send sound signals to the brain. The technology was young enough when Bidwell received it that he has had to work through a number of repairs and updates throughout his lifetime.

“There have been a few issues,” Bidwell noted. “Thankfully not major ones. One of the internal parts failed, and it was the second one in the world [of its model] to fail, so that was unexpected. It was never easy. You can’t take anything for granted. But ever since then, the implants have been a large part of getting me to where I am, both good parts and bad.”

Bidwell has often found himself needing to adapt to other unexpected circumstances as well. When he was originally attending his local public school, the school wanted him to take special education classes, even though he doesn’t have a learning disability.

“I learn the same way everyone else does, the only difference is I have a little bit more trouble hearing,” Bidwell said. “That ticked off both me and my parents, and so they took me out of school and put me into a local private school.”

And though he attributes many of his successes to the opportunities his private school education provided, Bidwell continued to face many obstacles throughout his educational life. He recalls especially teachers that weren’t respectful or accommodating of his deafness.

“There was one coach when I was on a swim team who tried to get me kicked off the team because I couldn’t hear his instructions while I was swimming,” Bidwell said. “They had a workaround where they would write instructions on the board while I was in the pool. He felt that I was ignoring him, which my mom didn’t like and didn’t sit well with USA Swimming, which sponsored the program. We managed to get the guy removed from his coaching position because you don’t really want a coach who doesn’t like you just because you can’t hear as well and it doesn’t affect the way you swim.”

At the University, however, Bidwell has found professors and students to be fairly understanding and sensitive to his deafness. To make sure he hears everything professors are saying, he carries an FM, which is a portable microphone that a professor will put on so he can clearly hear what the professor is saying. He also uses vibrating bed alarms instead of loud ones and a pen that records as he takes notes, so he can play back anything he has potentially missed.

“All of my coaches have been pretty much fine with it, and all of my professors were pretty much fine with it,” Bidwell said. “None of my teachers have complained about using it except joking that they’ll forget to take it off, which is understandable. I may just be oblivious about these sorts of things, but everyone at Wesleyan has been pretty cool and okay with it.”

“That was part of the original reason why we chose Wesleyan,” he explained. “Also, it’s a good school, so there’s no reason not to apply. And in the end, of the schools that accepted me, Wes was the one I wanted to go to most. In retrospect, I don’t think I would have had a good experience at other schools I applied to. I may have originally applied because my mom suggested it, but it worked out really well.”

Despite the support he receives on campus and his satisfaction with his choice, Bidwell doesn’t find himself engaging with deaf communities on campus. In fact, he’s not even sure if a deaf community exists.

“I certainly know people who are hard of hearing, but I’m not sure if there is any sort of deaf community on campus,” Bidwell said. “Even the sign language house is mostly sign language enthusiasts and not actual deaf people…. It’s, as I understand it, a very supportive community, just not one that feels right for me.”

In terms of the “capital D” Deaf community, as he puts it, at large, Bidwell has encountered tension between deaf people that use sign language and deaf people who choose to obtain cochlear implants. As he recounted, when Bidwell was a child, his parents faced someone who was disappointed in him for choosing implants, which made his parents averse to exploring more of Deaf culture. Consequently, Bidwell never learned sign language and never experienced Deaf culture as a large part of his life.

“There’s significant amounts of friction between people who are in the capital D Deaf community and people who choose to use cochlear implants because it’s seen as a rejection of that culture and a [rejection of the] need to engage with the [Deaf] community,” Bidwell said.

As Bidwell reflects on his life, he often returns to a single idea: perseverance.

“Whatever people say you’ll do, that’s not necessarily what you’ll do,” he said. “You can always do more than that. When I was young, my doctor said I would never read past a second-grade level and that was not the case. You can work hard. If I hadn’t worked hard, I wouldn’t be here at Wesleyan in the math major. Don’t take no for an answer if it’s given unfairly.”

Edit: This article erroneously categorized Bidwell’s hearing loss as “severe”. The correct categorization is “profound”. Additionally, Bidwell’s mother and grandfather attended Wesleyan, not his father. The article has been updated to reflect these corrections.