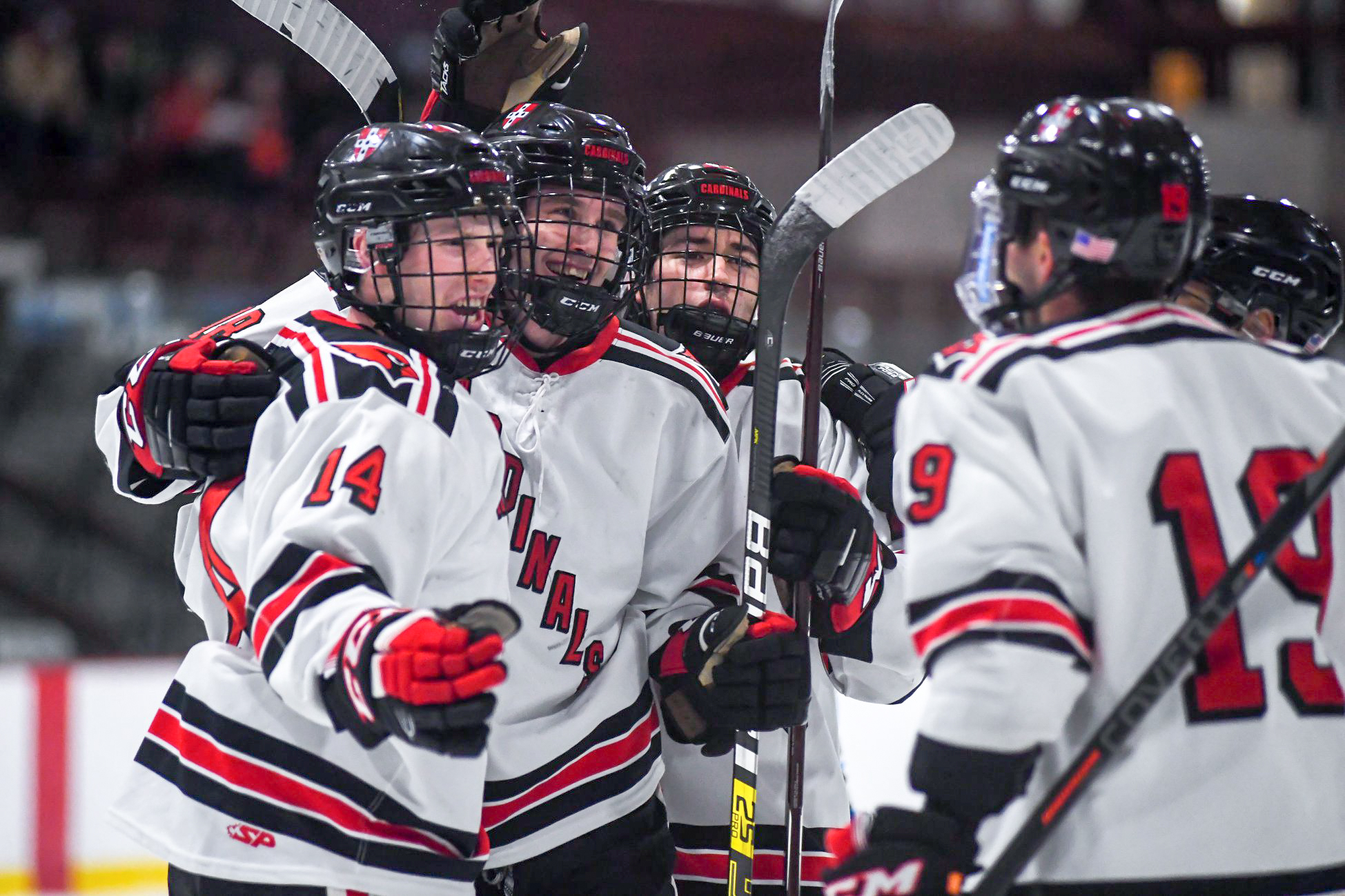 Men’s hockey is still undefeated in conference play, having continued their excellent play through a four-game winning streak. The Cardinals have pummeled the NESCAC with victories over Tufts, Conn. College, Amherst, and Hamilton. Now after winter break, they have a stellar record of 10-0-2 in conference and 12-4-2 overall.

In the win over Conn. College, the Cards won 6-3 with each goal scored by a different player. Star goalie Tim Sestak ’20 made 25 saves in the victory. Next, in the win over Tufts, the Cards won 3-0 with Tyler Kobryn ’20, Tyler Wyatt ’20, and Spencer Fox ’20 providing the offense. Sestak made 25 saves in the shutout victory. Sestak then went on to have another shutout in the 1-0 win over Amherst in which he made an insane 47 saves. Earlier this week, Sestak was named NESCAC Player of the Week for the effort.

The Red and Black capped off a great week with a come-from-behind victory over Hamilton. They scored four goals in a row after being down 2-0 to win 4-2. Walker Harris ’20 scored the game winning goal shorthanded in the victory while Sestak made 24 saves.

Captain Chad Malinowski ’19 attributes recent success to the cohesiveness on the ice.

Malinowski also added that effort has played a huge role in the success this season.

“From the first day of practice we talked about the importance of playing the right way,” Malinowski said. “Over this whole season we haven’t been satisfied with simply winning; we’ve been focused on improving our play every day. Over these last few games we have really been trying to focus on the little things: good line changes and discipline. We continue to hold ourselves to a high standard and work to improve our game.”

Next up, the Cards have two key NESCAC games, against Middlebury and Williams, before returning home.

“The key to finishing the season is continuing to do the same things we’ve been doing thus far,” Malinowski said. “We are two-thirds of the way through the NESCAC and are still undefeated, so we have the proof that our game plan works. We need to continue to sharpen our game and stay focused because everything matters.” 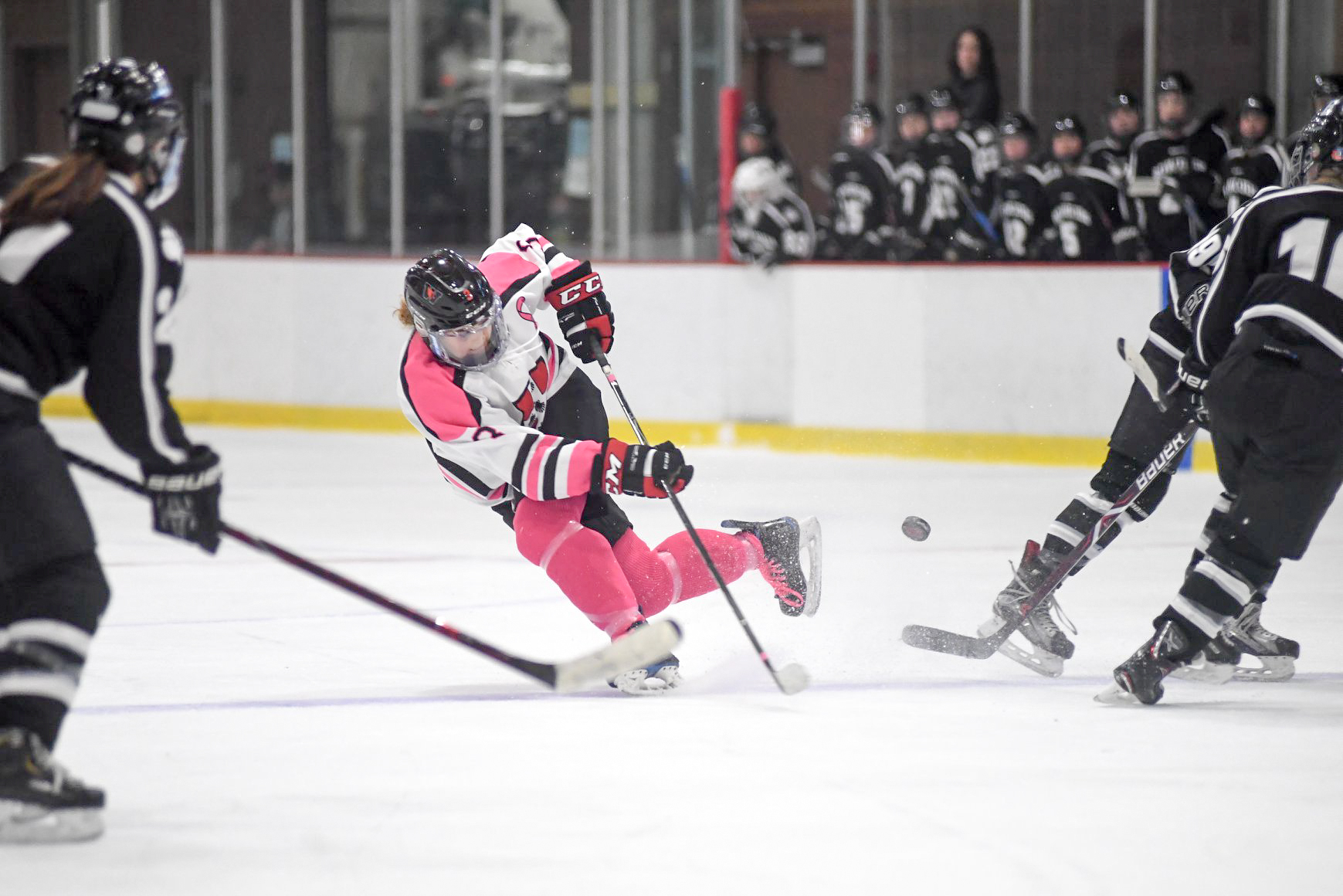 The women’s team didn’t fair as well in conference play; however, they have strung together some good performances. They won their second NESCAC game of the season, on Saturday afternoon, defeating Bowdoin 4-0 after tying Hamilton the week before.

In the win over Bowdoin, four different players scored for the team, and Allegra Grant ’20 made 29 saves and picked up her third shutout of the year.

Captain Grace Keogh ’19 said that the key to the positive performances has been the team effort and work ethic.

“Our play in last Tuesday’s game against Hamilton combined effort and execution, which allowed us to play effectively as a unit,” Keogh said. “Going into the Bowdoin weekend, we wanted to channel those same concepts: playing together, working hard, executing our roles, and capitalizing on offensive opportunities. When we possess all of these components, as we did against Hamilton and on Saturday against Bowdoin, we elevate our game and create positive outcomes.”

Keogh noted that playing with a better sense of urgency was key to bouncing back after a tough Friday night loss.

“After playing Bowdoin on Friday, no one was satisfied with the outcome,” Keogh added. “There was palpable frustration, but everyone was confident that Saturday’s game was one we could win. On Saturday, we played with a sense of urgency and came together as a group. Playing for something bigger than ourselves was a theme for the day, given that it was our Pink Game, which we play in support of the Joan B. Kilar Fund, our team’s breast cancer foundation that honors Jackie Kilar’s [’20] mother.”

Next up, the Cards take on Middlebury on Friday and Saturday.

“Going forward, we need to consistently bring strong effort and execution to each game that we play,” Keogh said. “With just three weeks left of the regular season, every game can influence our standing in playoffs. Playing as a unit and with a sense of urgency will help us get the outcomes we are seeking as the season wraps up.”

Come out and cheer on the Cards as they play crucial ’CAC competitors over these next two weeks. The women’s team plays Middlebury at 7 p.m. this Friday and 3 p.m. this Saturday. The men’s team will take on Bowdoin on Friday, Feb. 8 at 7 p.m. and Colby on Saturday, Feb. 9 at 3 p.m.