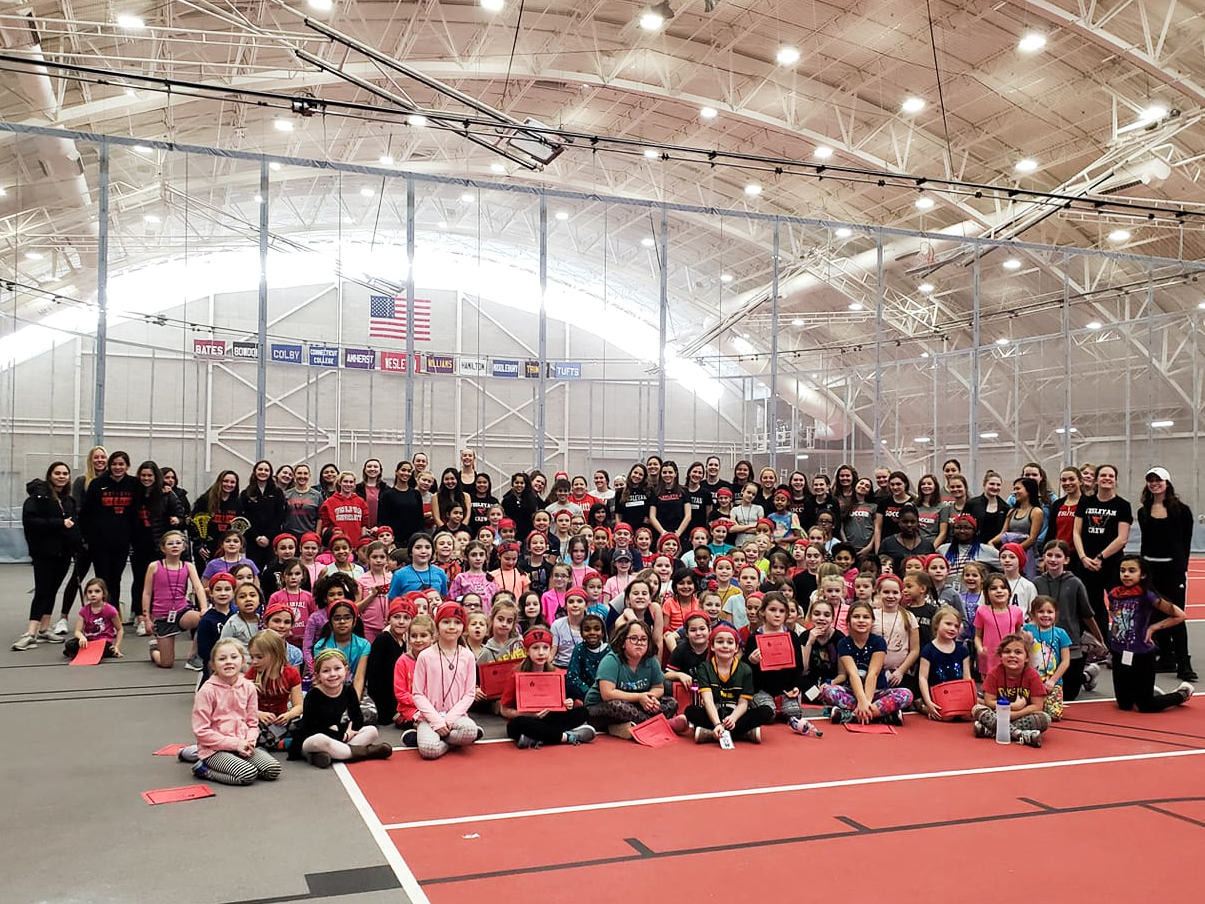 The second grader counted down the beginning of her race, ready in a runner’s stance. She bolted from her lane on the indoor track, trekking half the length of the track before yelling “finish!” and coming to a halting stop. She turned around to smile at her mom through exhausted breaths.

The University’s celebration of National Girls & Women in Sports Day hadn’t even begun.

This incident was just one of the energetic moments before the event started. Girls in kindergarten to sixth grade also cartwheeled and spun their way around the Bacon Field House, awaiting an afternoon of exercise, sports, and female empowerment.

Many were dressed not only for sports, but also for style. Patterned and neon leggings matched with inspiring t-shirts, reading everything from “inspire” and “love who you are,” to the very fitting “smart girl.”

Just around noon, athletes from the University’s women’s teams scattered in and around the field house’s indoor track, providing stations to teach each group of girls their particular sport. While the winter teams were in action at home and away, the spring and fall sports took to teaching six stations: lacrosse, tennis, soccer, field hockey, volleyball, and softball.

Each group started the event with a circle-up stretch, à la the best and most intimidating teams. Choruses of numbers began to fill the house: precise counting of odd numbers from the seasoned Cardinal athletes, enthusiastic high voices shouting back the evens.

Some parents took the time to grab some coffee from the Middletown area, while others sat on the bleachers, trying to find their daughters in a sea of enthusiastic young athletes.

After warming up, Wes players each worked with a few of the girls, teaching them how to dribble, catch, throw, hit, or bump and set. Each group of girls, separated into grades, took a turn with every team and their respective sport.

The day cumulated in a big team photo—capturing 135 smiling young faces—and some pizza to fuel the girls after a tiring, but all the more rewarding, afternoon of sports. Everyone left with a colorful certificate commending their participation in the event.

Some girls weren’t quite ready to leave the wonders of the Freeman Athletic Center and could be spotted in the front of the court or the ice rink, cheering on the women’s basketball and ice hockey teams, both of which had games later that afternoon.

National Women & Girls in Sports Day (NWGSD) has “empowered women and girls to get moving” for over three decades. On Feb. 6, 1987, the United States established the day to remember Flo Hyman, an Olympic volleyball player dedicated to women’s equality in sports. The day continues to be a way to recognize female athletes; however, it is also a movement focused on uplifting girls and women through participation in sports, as well as understanding the inequalities in participation opportunities.

The event is now in its fourth year at the University, beginning in 2016 at the suggestion of former assistant football coach and SAAC liaison Jeff McDonald. McDonald collaborated with current head softball coach Jennifer Lane, who has been working with Middletown youth sports for nearly 15 years.

Lane has continued to organize, promote, and grow the event. The first celebration had about 25 girls. This year brought together more than five times that first group.

“The word has spread within the community and even beyond Middletown to surrounding communities,” Lane said. “It’s now an event that local girls look forward to every year.”

Parents received notice from school teachers or saw flyers in hallways. When they brought their daughters to the event, more Middletown youth sports information was available. Flyers on local lacrosse and softball or baseball groups were placed next to the girls’ free Wesleyan headbands and special lanyards for the days.

As the event has grown so immensely, Lane hopes to accommodate even more girls next year by splitting up the event into separate clinics by age group.

But numbers aren’t the only thing Lane’s focused on, especially when it comes to improving and expanding the event. While the event allows the girls to get physically involved and learn sports techniques from Wesleyan women’s teams, she also thinks there’s room for constructive, empowering conversation. She believes adding a question-and-answer session to the event could allow the girls and student-athletes to talk about the value of sports, specifically as they pertain to young women. Dialogue around issues of self-esteem, body image, and teamwork can acknowledge the challenges young female athletes may face and how sports may intersect with and fight them.

“This is really an opportunity for our female student-athletes to not only pass on their love of the sport they play, but also to be role models and share with a younger generation their struggles and successes,” Lane said.

Zoë Kaplan can be reached at zkaplan@wesleyan.edu or on Twitter @_zoekaplan.