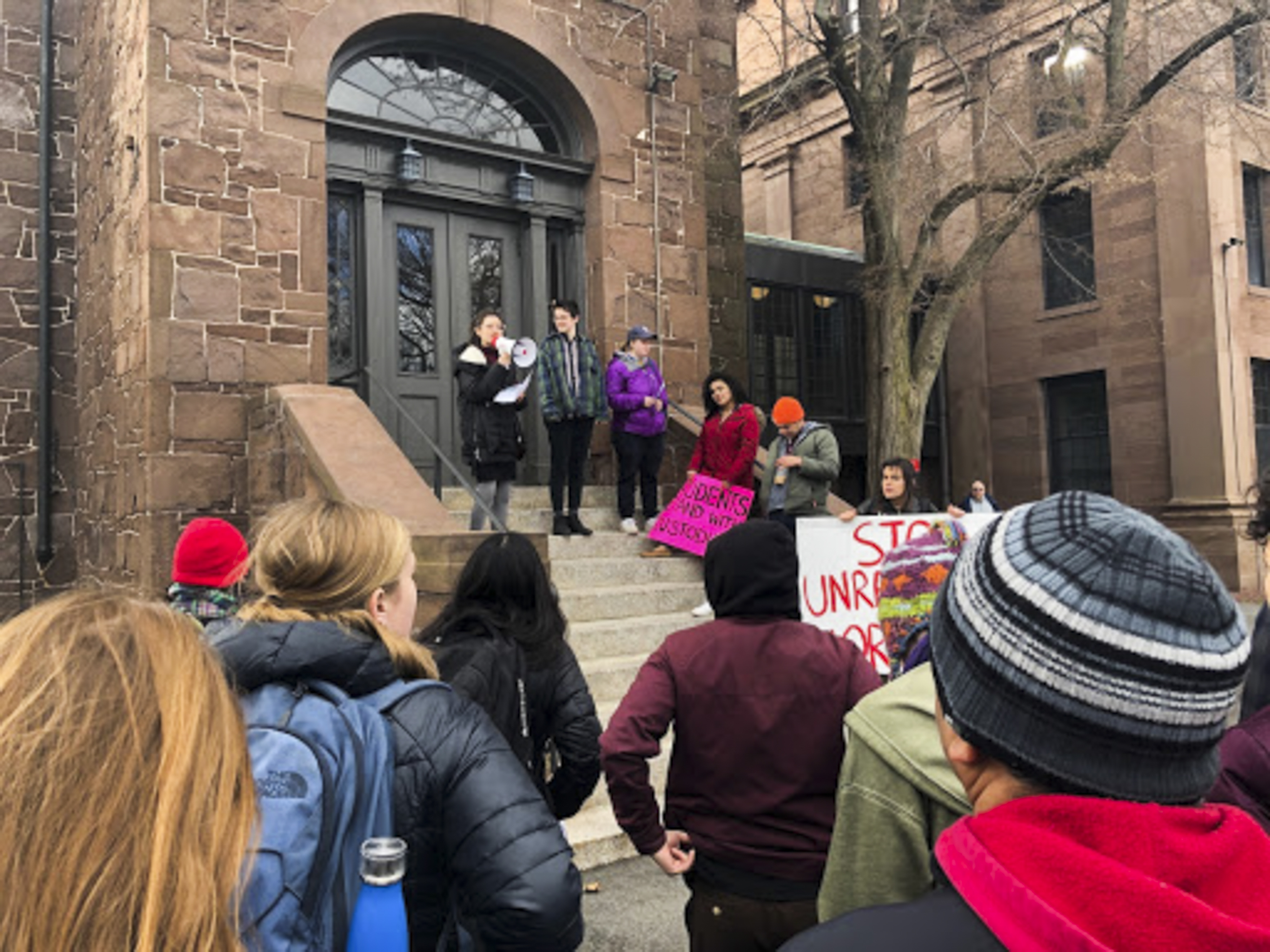 On Nov. 29, dozens of protesters gathered outside North College for a rally in support of custodial workers on campus. Holding signs and chanting, the protesters blocked the entrance to the building for almost an hour.

The rally was organized by the United Student/Labor Action Coalition (USLAC) and addressed concerns from students and custodial staff regarding unreasonable workloads and issues with the staff’s treatment on campus.

The event was part of an ongoing discussion of the treatment of custodial workers on campus. It came in the wake of the firing of María Sarabia, a 55-year-old custodian who had worked at Wesleyan’s Freeman Athletic Center for nine years, in August. Sarabia was employed by Service Management Group (SMG), which Wesleyan contracts for janitorial services around campus.

Sarabia, who is diabetic, was fired when her boss caught her taking a break to regain her energy with a cup of coffee. In early October, students organized to raise money for Sarabia, who has sole custody over her four grandchildren, and demand that SMG rehire her. Members of USLAC drafted a petition and delivered over 1,100 signed papers to a meeting of Physical Plant and SMG employees. As of now, the GoFundMe set up for Sarabia has raised almost $7,000.

In an email sent to USLAC member Emma Llano ’19, an SMG member named Louise Linsky addressed Sarabia’s firing and complaints about understaffing in the campus buildings SMG covers. The letter pointed to inaccuracies in Sarabia’s story, which was published in full in the “story” section of the GoFundMe campaign.

“The details that are currently circulating surrounding Maria’s dismissal are grossly inaccurate,” Linksy wrote. “However, if Maria would sign a Release, SMG would be able to provide the documentation related to her termination.”

Llano has been in contact with Sarabia, who told her that she has tried to call SMG’s HR department in order to sign the release but that the department has yet to answer her calls.

Linsky’s email comes as a response to the over-1,100 petitions that were delivered to Physical Plant and SMG staff in October. These petitions called for Sarabia to be rehired and for SMG to bring on five more employees by the end of the school year in order to decrease the workloads of its current staff.

USLAC members see SMG’s response as insufficient and misrepresentative of the realities of Sarabia’s situation. In a Facebook post publicizing the rally, USLAC pointed out Wesleyan’s failure to comment on the matter and what its members see as the unreasonable workloads thrust upon SMG employees.

“Wesleyan did not respond at all, while SMG responded that custodians at Wesleyan have reasonable workloads,” the post read. “As members of the Wesleyan community, we have witnessed the unreasonable workloads of custodians on this campus in our dorms, dining halls, academic buildings, and athletic facilities.”

When USLAC began working with Sarabia, she had already filed a grievance with her union, SEIU 32BJ. The grievance remains unsolved within the union, though, and is currently in arbitration, a process that can take years.

“The corporation and the union can’t come to an agreement,” Llano said. “So then it goes to what is called an arbitration process where a third party will look at both sides and decide what should be the outcome.”

USLAC member Tomás Rogel ’19 believes that the union contract all members sign does not adequately protect workers from unjust termination. He attributes this to the document’s unclear description of what “just cause” for termination means.

“There’s a section [in the union contract] about discharging employees for just cause, but just cause is never actually defined,” Rogel said.

“The Employer may discharge a member of the bargaining unit for just cause,” the union contract reads.

What constitutes “just cause” for terminating an employee is never explicitly defined in the contract. Therefore, the power to decide what justifies termination in situations like Sarabia’s is ultimately up to the employer. USLAC hopes to change this.

“We do have concerns, in general, from workers that we would like to address with the union,” Rogel said. “So, it’s a relationship in which we want to keep an eye on the union, and making sure they are functioning in the way that a union should, which is in the interest of the worker not the business.”

Another important matter raised by Sarabia’s firing and the protest is how much control the University has over the treatment of contracted labor. In 2000, the University, prompted by a USLAC proposal, introduced the Employment Code for Service Contractors to exert some form of control over the companies it contracts to fill jobs around campus. This document outlined job conditions, types of labor permitted, and employee protections for contracted labor and established a Code Compliance Board to enforce and monitor the code’s provisions.

The Code Compliance Board has not functioned for the past few years, but USLAC members Joy Ming King ’20 and Indigo Cochran ’21 are working with the administration to revive the board’s activities.

The enforcement and monitoring section of the Code states that service contractors must give a copy of the document to all employees.

Cochran believes that service contractors have not distributed this document to their employees.

“We definitely have been meeting with workers and union stewards and know that this code that is supposed to be the set of rules that service contractors follow has not been distributed and has not been edited in years,” Cochran said.

The document was most recently revised in September when information on wages was updated.

Workers, no matter their contractual status, have always been a part of the Wesleyan community. Olin Librarian Andrew White commented on the wonderful services that custodial workers provide for the library but said that he has heard that some buildings on campus are understaffed.

“I’m very happy with the folks who are assigned to Olin, I think they do a fantastic job and they are well-integrated into our staff,” White said. “But I have heard from my staff who are in the Science Library in Exley that there is not enough custodial coverage.”

Linsky responded to claims of understaffing in the email sent to Llano, writing that SMG has always abided by industry standards in assigning workers to campus buildings.

In a USLAC survey of custodial workers, some workers expressed that the work they are expected to do is unreasonable and requires them to work longer hours than they intend to.

One custodial worker reported that she arrives on campus at 7:00 in the morning and is expected to finish cleaning a large part of a building before 8:30, which she sees as an impossible task. She ends up leaving around 10:00 or 11:00 and is then expected to clean an entire dorm building. This is her routine five days per week.

Another employee cited workloads that leave him without a lunch break on his busiest days. He also stated that he is sometimes expected to be on call when he is not on duty.

“On Monday, three USLAC student representatives met with President Roth, who at the meeting agreed to respond to USLAC within a week with a timeline for how the administration will respond to our demands,” the statement compiled by Llano, Sophie Martin ’19, and Maia Reumann-Moore ’19 reads. “Michael Roth has gotten in contact with the administrators in charge of finance who will be investigating the issue over the break. We have scheduled a meeting with him early next semester to discuss the results of this investigation and steps moving forward.”

While the University may be working to address some of USLAC’s demands, Sarabia’s termination and case with her union remain unresolved. As written in the USLAC statement, there is still time for the Wesleyan community and SMG managers to take actions to rehire her.

“As of today, María Sarabia, whose case started this movement, is still out of a job,” the statement reads. “The Wesleyan administration does not have much power over individual employees and their responses are slow. We want to get Maria employed as soon as possible, so we want to urge students, staff, and faculty to call Gisela at SMG Human Resource and demand that SMG hire Maria at one of their open positions.”

Sarabia’s case with her union remains in arbitration, but USLAC points out that there are simple ways in which students can show their solidarity with Wesleyan’s custodial staff.

“A lot of the time, workers would like recognition,” Llano said. “Even starting a conversation, or just being conscious of the workers goes a long way.”